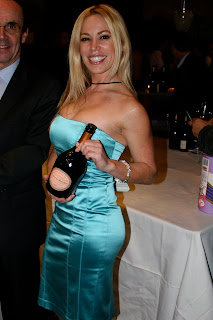 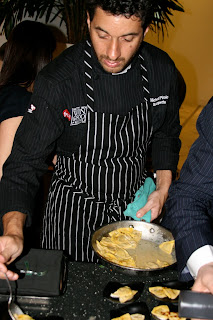 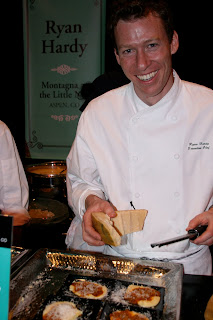 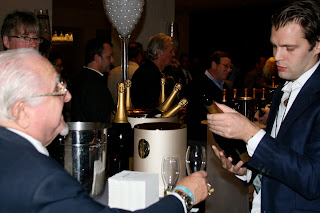 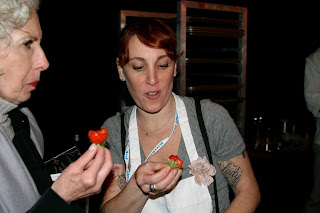 Fontainebleau Miami Beach was the setting for Wine Spectator’s Best of the Best. Sponsored by Bank of America, it was the premiere gourmet event, which officially opened the 2010 Food Network South Beach Wine & Food Festival.

After a day that included the Wine Spectator Trade Tasting at the Whole Foods Market Grand Tasting Village in the tents constructed on Miami Beach and a spectacular private luncheon at Quattro Ristorante featuring Pio Boffa of the legendary Pio Cesare wine family of Piemonte Italy.

It was an evening of legendary gastronomy with winemakers and chefs from across the United States and the important wine producing regions of the globe converging in a single place. There were nearly three thousand people in attendance for what many are calling the “Super Bowl” of wine and food.

Fontainebleau Miami Beach’s Kivane Kaymak, pastry chef at Hakkasan, nearly stole the show with his tasty dessert composition. “I’m serving coconut sorbet with a side of coulis and coconut crumble. I’m from Turkey, so I’m used to combining flavors that are both tropical and Asian and a bit Mediterranean to create a different set of flavors. It seemed perfect for the Best of the Best!” I first met Kim when he was Chef de Cuisine at Le Lan in Chicago. At the time, he was just incubating the idea of Urban Belly, in which he expressed his desire to present the home cooked flavors and textures of the food he grew up with in Seoul. Its nice to see him hitting the big leagues at SoBe Food & Wine Festival!

Wen Sian Tan, Chef de Cuisine at Hakkasan created a sensation with his crispy duck salad. The deceptively simple dish revealed a depth of flavor and complexity of texture that caused samplers to linger at his table to discuss preparation methods of this unique dish. The dish belied his experience in restaurants across Singapore, Shanghai and Beijing. It also betrayed the elegance he cultivated during his tenure with The Four Seasons. Kanpei!

Kaymak said his experiences as a restaurant chef helped shape his choice as a special preparation for the evening, “I’ve worked with Emeril for the past six years and I was in New Orleans for 9 years, so that brings a lot of experience with exotic flavors and spices to the forefront. This dish is pretty straightforward with the flavors of coconut and tropical fruit, passion fruit and coconut crumble for texture and a bit of chocolate liquor just for texture and a little depth of flavor. Everybody’s lovin’ it!”

Michael Parollo with Scarpetto Miami was having a ball preparing one of the most popular and delectable dishes of the evening. “Creamy polenta with truffled mushrooms. It’s the signature dish of chef Scott Conant of Scarpetta at Fountainbleau, Miami Beach. It’s all from northern Italy with the roundness of the polenta and the truffles with the fricassee and the Fontina cheese. It makes for a brilliant taste combination that really goes well with the variety of wines being served here.”

It was terrific to run into an old friend from last year’s Aspen Wine & Food Classic, the granddaddy of all food and wine events, Ryan Hardy from Montagna at The Little Nell. His restaurant is a virtual Mecca of handcrafted cuisine.

Stephan Pyles of his namesake restaurant in Houston, Texas took comfort food to a higher level with his Oxtail tamales. “I wrote a book on tamales. One of my four books is strictly on tamales. So I try to do interesting things with them and oxtails are the new short ribs. They’re the ultimate comfort food. Something maybe your grandmother used to make, but nobody likes to talk about it. Now they’ve come out of the kitchen and into the forefront of restaurant cuisine and they make a really great tamale dish Here, I’ve done it in a kind of downscale ‘surf n’ turf’ variation with Hake, which is a Gulf Coast white fish, similar to Sea Bass that has a lot of flavor and firm texture. It really goes well with the fatty texture of the oxtail. I spent a lot of time in Spain where they also eat a lot of Hake. So I smoked it lightly and combined it with the oxtail in a tamale for a really unctuous kind of eating experience.”

No meal is complete without a touch of chocolate at the end. So it was back to another old friend from Chicago, Mindy Segal of Mindy’s Hot Chocolate who presented two delicious hot chocolate ‘shakes’ made with dark and milk chocolate respectively. I remember Mindy from her days as pastry chef at MK and Charlie Trotter’s. Just one sip and you can see why she won numerous awards in her hometown, including the Jean Blanchet Award for Best Celebrity Pastry Chef and Chicago Magazine’s Pastry Chef of the Year. Her latest solo venture, HotChocolate Restaurant and Dessert Bar is a culmination of her 20 years of creativity and passion.

I left the Best of the Best with a couple of bottles of VOSS premium water from Norway under my arm. I gave one of them to my cab driver as he dropped me off at my apartment on Indian Creek Drive, not far from the Fontainebleau. “This is really a touch of class,” he said as he looked at the bottle. That’s about the best way to describe the entire evening.

Posted by Dwight the Connoisseur at 8:31 PM