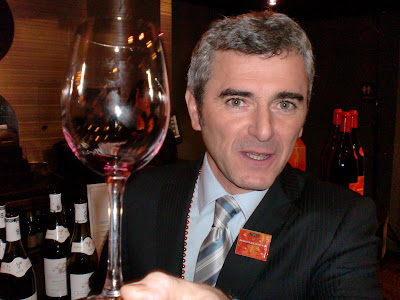 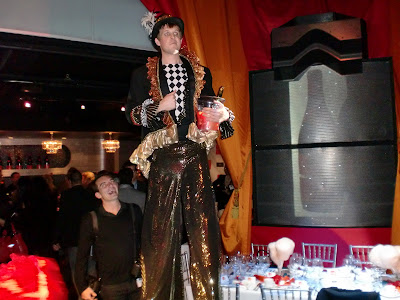 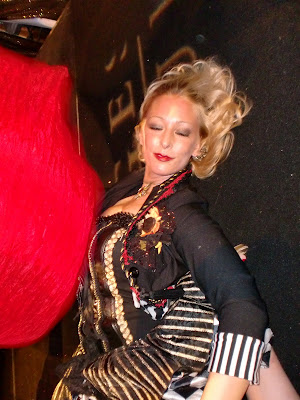 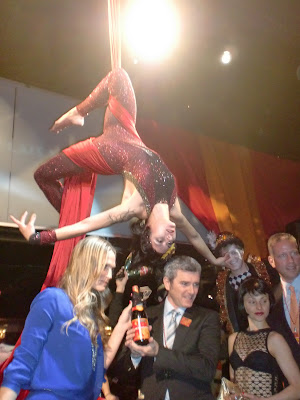 2. A performer at the District 36 Nouveau Cirque celebration

3. An exotic dancer celebrates the arrival of Beaujolais Nouveau

Franck Duboeuf, co-proprietor of Les Vins Georges Duboeuf, along with actress Molly Sims of TV’s Naughty But Nice with Rob Shuter and Venus & Vegas were on hand for the official nationwide uncorking of this festival of red wine.

Peter Deutsch, CEO of W.J. Deutsch & Sons, the exclusive U.S. importer for Les Vins Georges Duboeuf, presided over the event, noting that the New York event was the inaugural celebration of Nouveau Cirque parties across the nation, with circus themed parties in every major city over the next 36 hours, including Chicago, Boston, Savannah and San Diego.

Beaujolais Nouveau is a red wine made from Gamay grapes produced in the Beaujolais region of France. It is fermented for just a few weeks then officially released for sale on the third Thursday of November. The quality of the wine is said to be an indicator of what the vintage wines will be like in the future. Each year, it is greeted with great celebration around the world, with release parties, parades and other festivities. This year’s release party at New York’s District 36 was the official kickoff for the United States celebration of the new release.

“The whole idea is that this wine is drinkable and its about fun,” Franck Duboeuf told me while sipping a glass of his creation. “I’ve been tending to this wine in the fields and shepherding it through to completion. And to think that just a few weeks ago, it was sitting in my cellar! It’s a real treat to finally celebrate it here and hope that everyone will do as I’m doing, and just have fun!”

This is the best year ever for Beaujolais Nouveau. The wine has terrific floral aromas and an explosive flavor that is rich with lush, ripe fruit. Celebrity chef Marc Murphy, a judge on Food Network’s “Chopped” and owner of Landmarc restaurants and Benchmark Events, two nationally recognized entities with presences in Chicago, prepared a sumptuous luncheon. Passed Canapés included Gypsy’s goat cheese profiteroles, Pigs in pretzels on parade and a smokin’ Jumping salmon tartar with pink peppercorns oil & chives. Two hors d’oeuvres I missed were Vietnamese chicken wing lollipops and the Big top crab cakes with fiery aioli. George Duboeuf Puilly-Fuisse Flower Label 2009 ($20.93) was the introductory offering. It’s a pity that this was served along with the passed hors d’oeuvres. It really deserved a lot more attention. This is a truly quality Puilly-Fuisse that I would stand next to anyone charging twice the price. I especially enjoyed it with the goat cheese and thought the salmon tartar pairing was a stroke of genius!

The first course was Tiger Shrimp on a Barrel of tomato fondue, avocado puree & confetti. It was accompanied by George Duboeuf- Beaujolais-Villages Nouveau 2010 ($10). This is a superb wine for the price. It has nice hints of strawberry and cedar on the nose with lively flavors of cherry jam and a little nutmeg on the palate. I was thinking about my holiday duck with chestnut and fresh cranberry stuffing as I was tasting this one and am planning to buy a case from my favorite purveyor, Sherry -Lehmann, whose representatives were present at the event. (They ship!)

The rest of the wines showed in stellar fashion. George Duboeuf Morgon Jean Descombes 2009 ($15.99) showed perfect balance with a sumptuous bouquet of black currant, plum and violets. My entrée selection was the Ringleader’s Braised Short Ribs with carrots & whipped potatoes. This is a classic fall dish with rich flavor, almost like a beef bourguignon. Slow cooked, in an herbed sauce and served with whipped potatoes and a root vegetable, it is the perfect fall dish. With this flavorful, rich red wine, it is a trip to gastronomic heaven. How could I ever be a vegetarian!

I never made it to the desserts, Contortionist’s Caramelized Tarte Tatin, a French classic, and High Wire Cheesecake Petit Fours. When there were several bottles of Beaujolais Nouveau waiting at the bar to be sampled before leaving, I was not about to waste what precious time I had eating dessert. Organizers of the release event distributed bottles of Georges Duboeuf Beaujolais Nouveau 2010 to each attendee, along with bistro aprons, wine openers and various other tchotchkes. My bottle of Nouveau went into immediate service, serving as part of the simmering sauce for Coq au Vin. As Julia would have said, Bon Appetit!

Posted by Dwight the Connoisseur at 6:40 AM