NEW YORK—The Astor Center, in the revitalized downtown NoHo neighborhood, was the setting for the discovery of one of Tuscany’s hidden gems, the Morellino di Scansano wine district of Italy.

The wines arrived in the U.S.just in time for the summer barbecue season, because they are medium bodied red wines that go great with a steak or other grilled meats. Easy on the palate and the pocketbook, they are like a trip to one of the greatest, yet undiscovered parts of Tuscany.

Located in one of the most natural and uncontaminated areas of Tuscany, along the southern coastal region known as the Tuscan Maremma, wine production has been traced by archeologists back to the days of the ancient Etruscans in the fifth century, B.C. The region became a recognized DOCG (Demoninazione di Origine Controllata e Garantita starting with the 2007 harvest, attesting to its exceptional level of quality at every level of wine production. Comprised of 100 % Sangiovese grapes, this superior designation of the wine of Morellini di Scansano attests to  its intrinsic qualities and international renown. 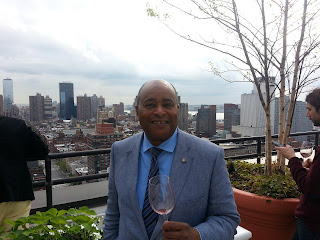 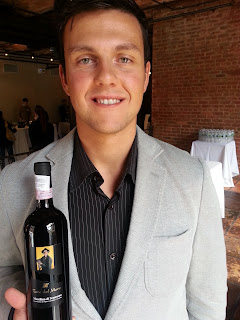 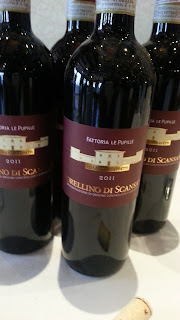 The wines of Fattoria Le Pupille by Elisabetta Geppetti 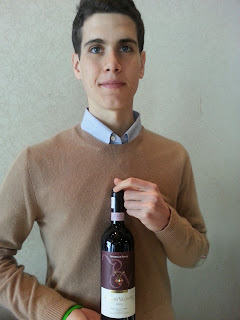 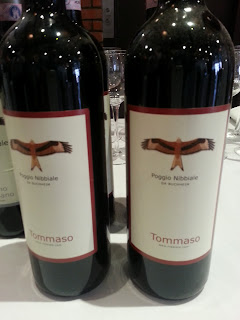 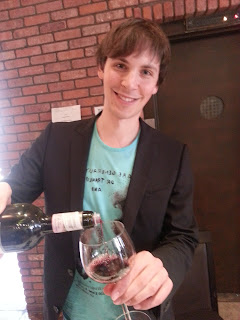 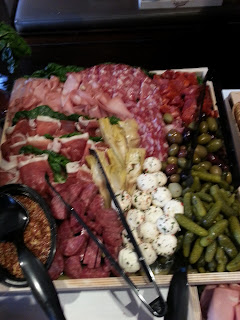 The sumptuous buffet of Italian salumi and local Italian cheeses, olive and condiments 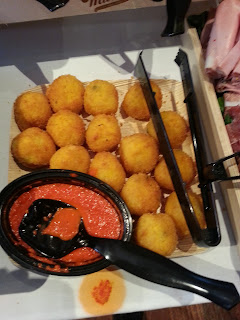 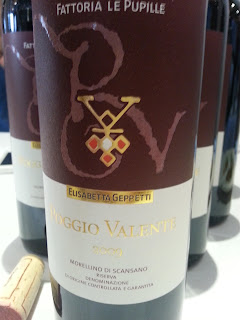 This bright red, juicy wine is unique to all of Tuscany. It has the intense flavor of ripened cherries and the distinct presence of spices, even among the wines that are not barrel aged. The finesse and balance of the wines make them perfect with a variety of Italian inspired dishes. What's even better, the wines are all in that comfortable $12-$20 price range, making them, not only affordable, but a terrific value when you balance the price against the incredible flavor profiles.

The Astor Center debut presentation was part of the Third U.S. Tour of the Consortio Tutela Morellino di Scansano and featured a guided tasting and lecture by Gregory Dal Piaz, Editor-in-Chief of Snooth.com, followed by a walk-around tasting and Grand Buffet. This in-depth presentation was not only informative, but a delight to the senses.

“The Maremma is particularly significant because it has some of the most varied terrain in all of Tuscany. Vineyards stretch from the highest hilltops down to the sea,” Dal Piaz stated. The wines tasted at both the seminar and walk-around tasting attested to the variety in flavor and texture that he alluded to. In addition, several of the winemakers were present to personally describe their wines.

Although made from  the same grape, Sangiovese, the flagship grape of the region, The wines presented were as varied in taste and temperament as the personalities of the winemakers. Each had their own distinctive style of winemaking that put their personal stamp on these beautiful wines that displayed the multi-faceted face of the wines of western Tuscany.

Wines are made in a variety of methods, some using organic grapes, others are aged in French oak barrels, giving them a plush mouthfeel and deeper concentration of flavor. Others are fermented using native natural yeasts, which add further complexity. By law, the wines must contain at least 85% Sangiovese grapes, but winemakers have the opportunity to enhance them with other varieties and many of them use this as an opportunity to introduce other, unique local grapes, such as Cillegiolo, which had been resurrected from near-extinction. International grapes, such as Cabernet and Merlot, also find their way into the mix, giving the wines an elegant characteristic.

Santa Lucia winery began in 1980. The winery began making its Moerellino di Scansano wines in 1997, starting with its first release, A Luciano. The winery then began producing Tore del More and Tore del Moro Reserva, which it presented at the Astor Center tasting. Luca Scotto is the marketing director. “My father founded the winery in 1980, and my brother has been the winemaker since 1999.  “We think the wines of the Morellino are perfect for the United States. The wine is easy to drink and it goes great with food. It has a natural fruitiness and a smoothness in the mouth that is perfect for the American palate. For those who like variety, we have many types of Morellino. For example, we make a wine that is a blend of 90% Sangiovese and the rest Alicante. Alicante is a very particular grape because it gives the wine a real depth of color. It also is a special fruit that gives the wine a really bright smell and fruity flavor that is really unique!

“The Tore del Moro Reserva is easy to drink too, but it’s a little more complex, It has a little smell of oak on the nose, because its aged 4 to 6 months in small barrels and then its aged 6 months in the bottle.

“The nice thing about Morellino, is that you can drink it without food, or with an appetizer at Happy Hour (spoken like a true Marketing Director!). “The first selection, Tore del Moro, is perfect with pasta. Particularly pasta with wild boar (white pork), which is a real local specialty from Tuscany and the Maremma, where we are located. Then, with the Reserva, what’s perfect is a beefsteak, deboned. That’s the perfect suggestion!”

Poggioi Valente 2009 is the wine of Fattoria Le Pupille and its creator and owner Elisabetta Geppetti. Her son, Ettore Rizzi is the winemaker and was personally present at the Astor Center to pour her wines.  “Today we have two wines; the Vase and the Reserva. The Vase’ is a really fresh wine, juicy, made from 85% Sangiovese, the rest is a collection of red, fruity grapes such as Cillegiolo and Alicante. The wine is aged only in stainless steel. There is no use of oak barrique. The reserva is aged 15 months in barriques, but the fermentation is all done in stainless steel. It’s all single vineyard, a vineyard of about 15 hectare (about 35 acres).  These are the original vineyards, which my mother planted at the estate in 2000.

“This wine has a very special taste that is uniquely Italian. I would recommend the Vase’ with pasta and a really rich, strong Ragu’ (Red meat sauce). With the Reserva, I would recommend a thick steak. It really has flavors that will clean your mouth out from the fat of the meat.”

Another terrific wine featured at the symposium and tasting was Tommaso from Poggio Nibbiale, the creation of Dr. Nikolaus Buchheim. He is a real anomaly because he is a German winemaker living in Italy. His son Roland, was on hand to opour the wine. “We are producing  two types of Morellino di Scansano; all red wines that are only produced with organic cultivation. It’s not certified. But we don’t use any artificial herbicides or pesticides or chemical fertilizers. For the fermentation, we don’t use exogenous yeast  , so we just hope that the ambient yeast that occurs naturally on the surface of the grapes will do the job.”

Most people don’t associate Germans with Italian winemaking, but Roland has a ready answer. “My parents didn’t really start out to be winemakers, but they had a passion about wine. Fifteen years ago, the bought a place in the Maremma and planted some vines. Before, there was nothing there.”

The flavor of the Morellino wine is truly unique, lending itself to a variety of cuisines, Roland emphasized. “The wine itself has a pronounced flavor of red cherries, but it also has some flavors of “white” fruits and berries as well, which gives it an unusual finesse. The Reserve is a bit more refined than the other one. It also has some undertones of vanilla and tobacco, which gives it the added edge of going with some different things, even some spicier foods.


So what food would you have with the wine I pressed the young wine maven. “I think a  really good steak would be best with it. But, for myself. I live in Berlin and I’m always having dreams of Italy. So I quite often make a pesto with fresh Basil and serve it over pasta and have it with the wine. It’s really a terrific combination. I think the Basil Pesto goes quite well with it. It’s almost like a little journey to Italy when I do that!”

Massi di Mandorlala Reserva 2008 was presented by importer Mario Pippa of Decanto-Wines for Life of New York  (www.decantowines.com). He brought an array of superior examples of the Morellino di Scansano and was quite effusive in his eloquent descriptions. “ This is truly wine that puts breath to life,” he said, gushing over his exquisite Massi di Madorlala. The almost inky black color of the wine belied its black cherry flavor and accompanying notes of black currants, anise and hints of dried sage, oregano and hints of Madagascar vanilla, cedar and hints of tobacco and dark chocolate. This is a rich full wine that borders on some of the rich flavors you’d find in a Port. What goes with it? “Steak!” Mario said without hesitation. “I’ve also got a terrific recipe for meat lasagna that I’d like you to try.” From the way Mario was clutching the bottle, it seemed that he was reluctant to part with it, even though he’s in the business of selling wine. If it’s that good, I must have some at my next meal.  What a great thought to have at the end of a fabulous day of wine tasting. ABBONDANZA! 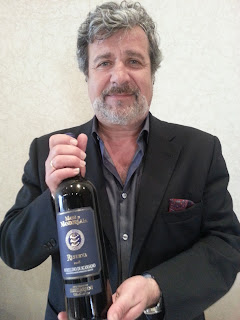 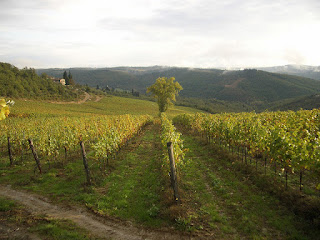 The vineyards of the Maremma-photo by Dan Taylor 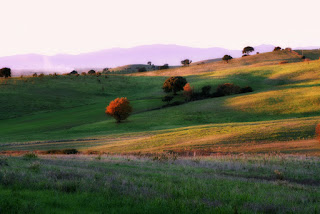 Hillside vineyards of the Morellino di Scansano-photo by Ric Magliano
Posted by Dwight the Connoisseur at 4:53 PM