NEW YORK---What looks like vodka, has a taste similar to find sake, is made with all the care of the a fine wine and is versatile enough to be mixed with a variety of fruits or made into a cocktail, yet is just as desirable as a fine sipping drink on its own? Say hello to Iichiko Frasca, a specialty brewed barley wine,  called Sochu, which is similar to sake, yet is prized in its own right as a premium beverage in Japan, dating back to antiquity. It's now finding a new following among lovers of light, clean tasting beverages that are great as an ingredient in cocktails, go great when combined with fresh fruit or taste wonderful just on their own as a clean, low calorie beverage with a rich full-bodied taste.

The roots of shochu dates back to the Edo period of Japan, from Iki island, located between Kyushu and the Korean Peninsula. The island was know for its abundant rice crope, but, because rhe rice was reearmarked for government taxes, the local farmers turned to their barley to make a brew for local consumption. It wasn't until 1979 and the ingenuity of Sanwa Shurui of Ota Prefecture and their lanching of their 100% Mogi Sochu, that the Iichiko barley Shochu campaign became widely popular and sparked an entire category of beverage that became an overnight boom throughout Japan. Now the boom is being heard in the U.S. and its likely to set off fireworks to rival the Fourth of July!

I had an opportunity to taste this unique beverage on an excruciatingly hot summer day in New York and was delighted with its light texture and subtle flavoring. I tried it first as a stand-alone beverage, serving it in a heavy leaded crystal whiskey glass with a single cube of ice. I was impressed with its clean, even taste, It reminded me of the best muti- distilled vodkas, with one noted exception, the distinctive taste of premium select barley made for a subtle after taste of toasted straw, slightly fermented white raisins and the light peat aftertaste and aroma you might find in a single malt scotch. Adding yet another dimension, I tried it on the rocks again with a frozen strawberry, a frozen raspberry and then with a slice of key lime. The flavor combinations were astonishing and perfect for summer. This is a great drink to serve at a summertime patio party as an apperitif or mixed into a terrific fruit-based summer cocktail or as a post prandial treat in your air conditioned drawing room, away from the sweltering heat of an outdoor cookout. The interesting combinations of flavors, especially when combined with different fruits, made for a great conversation piece. The presentation, in the elegant looking carafe shaped bottle only added to the classy mystique! Sochu is mild an easy on the palate and the body. Its actually a sort of "health drink" because it is easily assimilated into the body and burns "clean", with no residual hangover effect. The Japanese love it combined with fresh fruit, like their own pickled plums or preserved lemon. Lemon, lime and other citric acid fruits are perfect when combined with Sochu. You can't ever get fatigue from over drinking because the citric acid naturally protects the lining of the stomach. The Japanese also claim its a natural barrier against disease. when combined with citric acid. Need I say more.  I absolutely love this drink, especially for summer. The fact that it  costs  $70 should not be a deterrent. It is comparable to any other premium spirit, such as a single malt scotch or multiple-distilled vodka. That fact that it is  only 35 calories per drink (per 2 oz shot)  even makes it more attractive and a "must-have" addition to your patio liquor cabinet. The fancy carafe fits nicely in your wine cellar and looks great on the bar or on your buffet table as well. Bonzai! 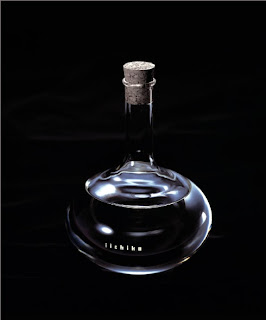 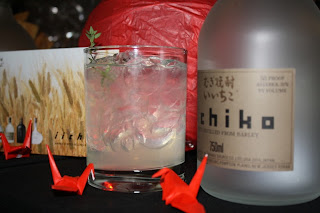 Posted by Dwight the Connoisseur at 2:55 PM