A crisp, fruit-forward Chardonnay that really delivers for under $20


It's no secret that great wines are being produced in virtually every state of the Union. North Carolina can now lay claim to one of the best values in a fruit-forward Chardonnay that sells for only $15. Small production under rigorous standards of excellence is a large part of the reason this wine if so appealing. Barrel fermented in both French and American oak, the wine achieves a delicate balance between crisp, golden apple and Key Lime.  fruit, with hints of honeydew melon, vanilla and a slight backnote of lychee. For those who like Chardonnay with a buttery aftertaste, as so many Americans do, this wine does not disappoint, nor does it go overboard. Shrimp, lobster and oysters are the first food pairing choices that come to mind. Pasta in a light cream sauce, dusted with Asiago cheese and loaded with fresh, briny shrimp, or Maryland crab cakes make a great Saturday night meal, as would a lovely pink slice of smoked salmon with lemon and capers. Serve well-chilled and have an extra bottle on hand as the first goes down easy! 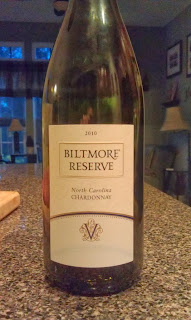 Biltmore Estate was founded by George Vanderbilt, the grandson of railroad and steamship magnate Cornelius Vanderbilt. Built in the 1890's to resemble a French chateau, the grounds are covered with hundreds of trees, planted there by Frederick Law Olmstead, the designer of New York's Central Park. The estate, considered the largest home in America, was first envisioned by George Vanderbilt while vacationing in the North Carolina countryside near Asheville. He turned a sorry stretch of plowed-over bottom lands and scraggly hillsides into a luxuriant complex gardens that would rival those found anywhere in Europe. Vineyards were planted at the estate in the early 1970s by William Cecil, George Vanderbilt's grandson. With 150 acres of vineyards planted in the late 1970s, Wiiliam Cecil traveled to France and hired Phillipe Jourdain, a sixth-generation winemaster to chart the future of Biltmore Winery. With the Biltmore Estate Wine Company formally established in 1983. Bill Cecil, son of William Cecil, assumed leadership and in a short time, opened the winery to the public. Bernard Delille, a native of France with a master's degree in biochemistry, rose from assistant winemaker to Winemaster and Vice President of the Winery upon the retirement of Phillipe Jourdain. In 1999, Sharon Fenchak

Vineyards at the Biltmore Estate 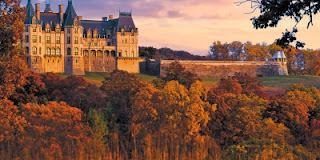 The Biltmore Estate in Fall 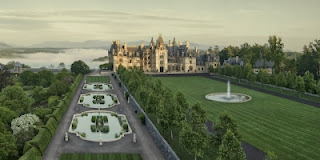 The house and gardens with trees planted by Frederick Law Olmstead, the designer of Central Park, New York City 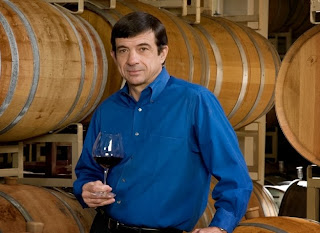 The tasting room and retail shop at the winery

who holds a master's degree in food science from the University of Georgia, joined the winemaking team. Her passion for crafting fine wines and her love of cuisine were nurtured while she lives in Vicenza, Italy and traveled extensively throughout that country. Her involvement in developing new grape-growing technologies and production methods dovetails perfectly with winemaker Bernard Delille exacting standards in creating high-quality wines that are true to their varietal character.

The Biltmore Reserve Collection includes Biltmore Reserve Pinot Noir 2011 Russian River Valley ($24.99), a bright garnet red beauty with lush flavors of ripe plum, wild strawberry and raspberry with hints of vanilla and baking spices and dark, turned earth notes that make it the ideal companion to that forthcoming Holiday Turkey! Crowning the portfolio is The Bilttmore Estate Sparkling Collection is their crowning achievement and the award-winning embodiment of the grand legacy of the Biltmore Estate. Biltmore Estate Blanc de Blancs Methode Champenoise-Brut 2009 (a steal at @24.99) is 100% Russian River Valley Chardonnay. Sourced at one of the most famed vineyard locales in Sonoma County, the grapes are harvested at their peak of acidity and cold fermented in stainless steel begfore undergoing a secondary fermentation in the bottle and then aging for at least another two years before disgorging. Straw, yellow gold coloration is an indication of the hazelnut and honey flavor notes with a hint of Golden Delicious apple. Refreshing and well-balanced with persistent bubbles and bracing acidity, this is a terrific sparkler made in the traditional method and perfect for toasts around the Holiday table and for ringing in the New Year 2014.
Posted by Dwight the Connoisseur at 10:07 PM