A Michelin--starred day and night in Puglia

CONVERSANO, Puglia--A sincere passion for the land,  and an embracing of the culinary traditions of the Puglia wine region, are the driving forces behind Pasha Ristorante. Executive Chef Maria Cicorella and her son, Antonello Magita', the manager and Matre 'd make it the embodiment class and sophisticated service.

On a night awash with the glow of a full-moon, my party of international wine and travel journalists were treated to an evening of gastronomic delight.  The seasonal delights of cucina tradizione pugliese, as interpreted by Chef Maria Cicorella and her culinary staff created a culinary landscape. The seven-course meal featured local delicacies such as smoked stracciatella cheese, Mullet filet, local foie gras and hand-made orecchietta pasta. The primary focus was a superb locally grown Rabbit smothered in shavings of white truffle from the nearby town of Basilicata. Wines from Castel di Salve from their nearby estates at Monteroni, Ugento and Supersano, accompanied the finely crafted meal. 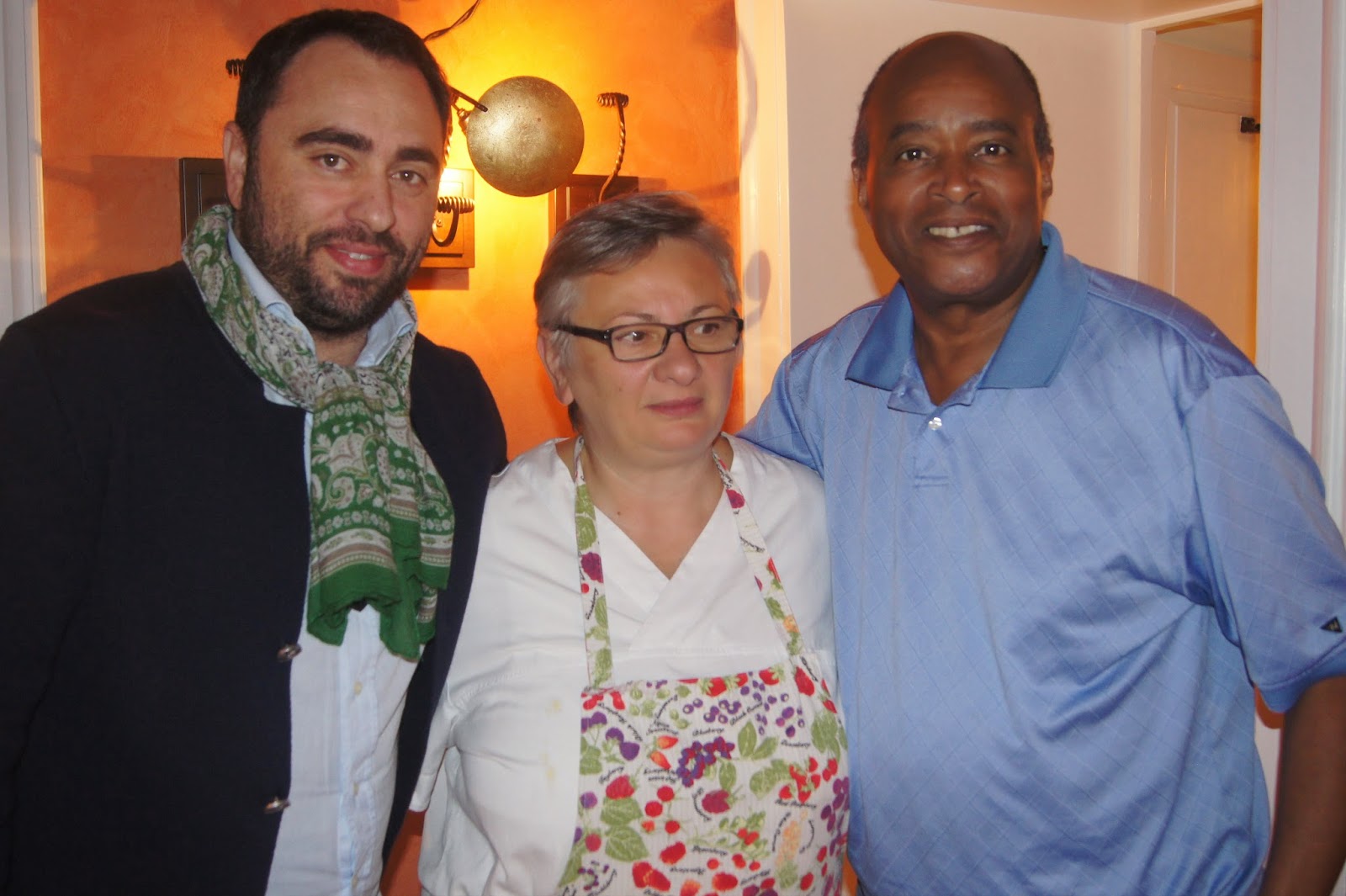 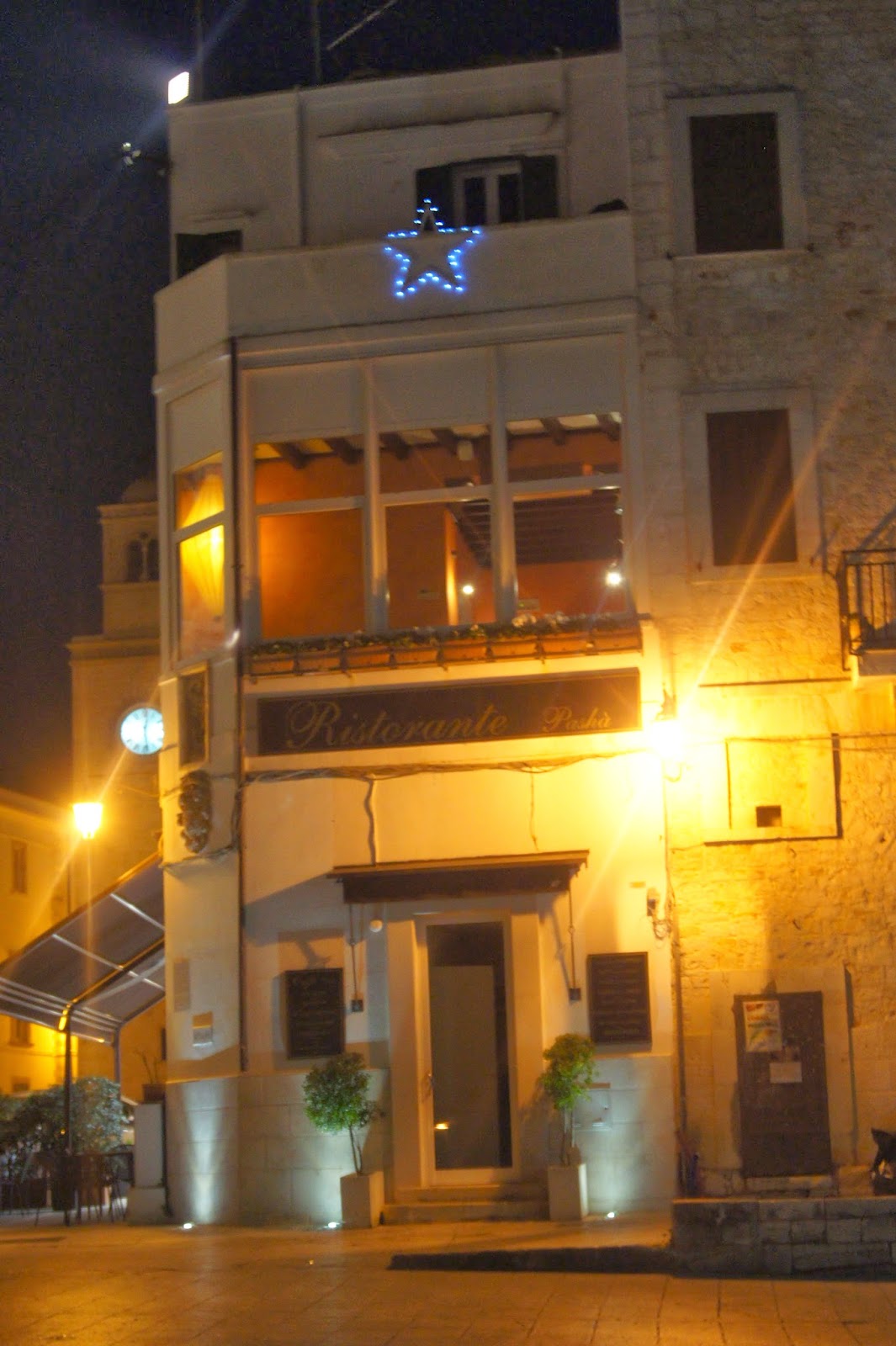 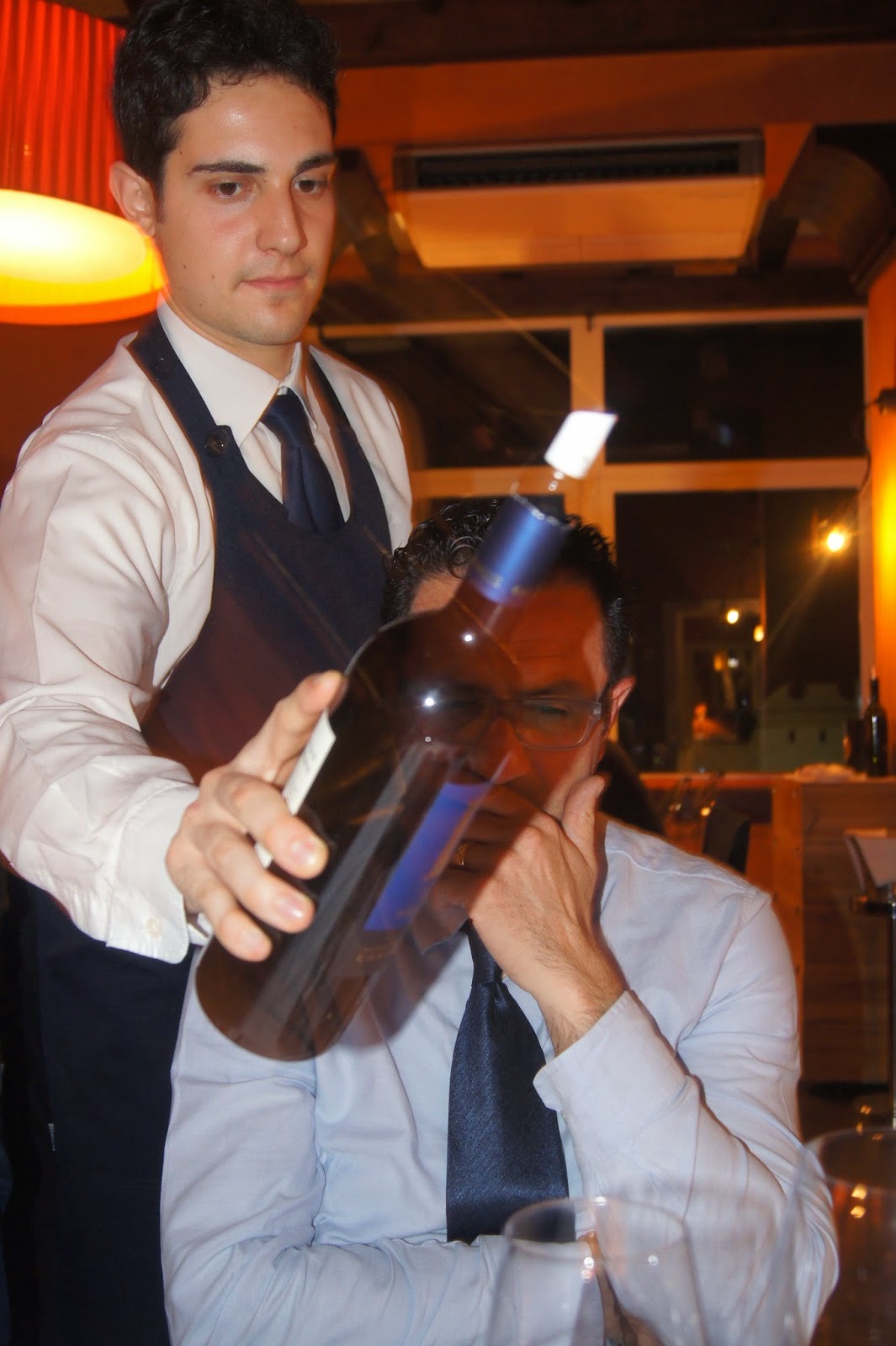 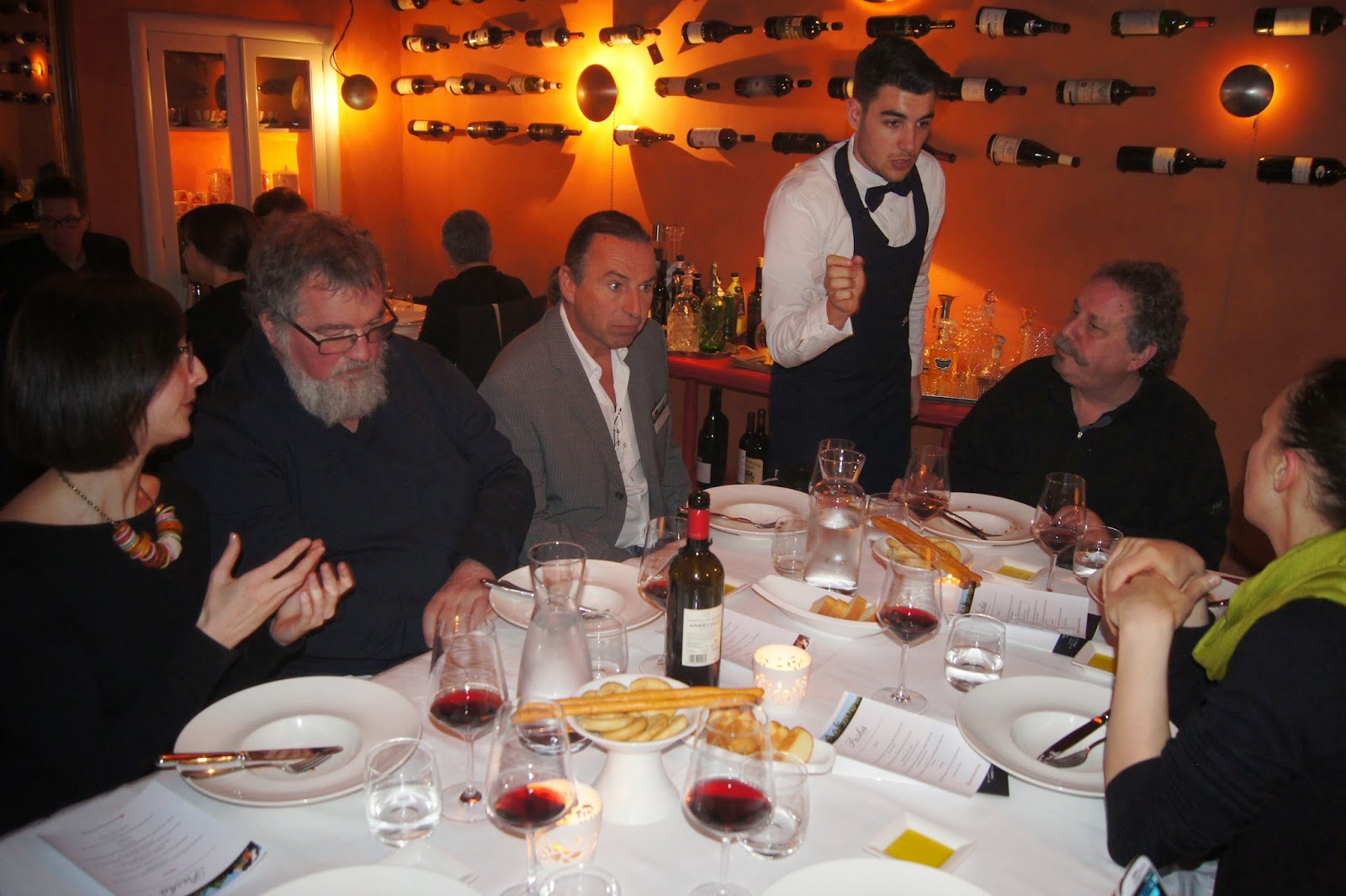 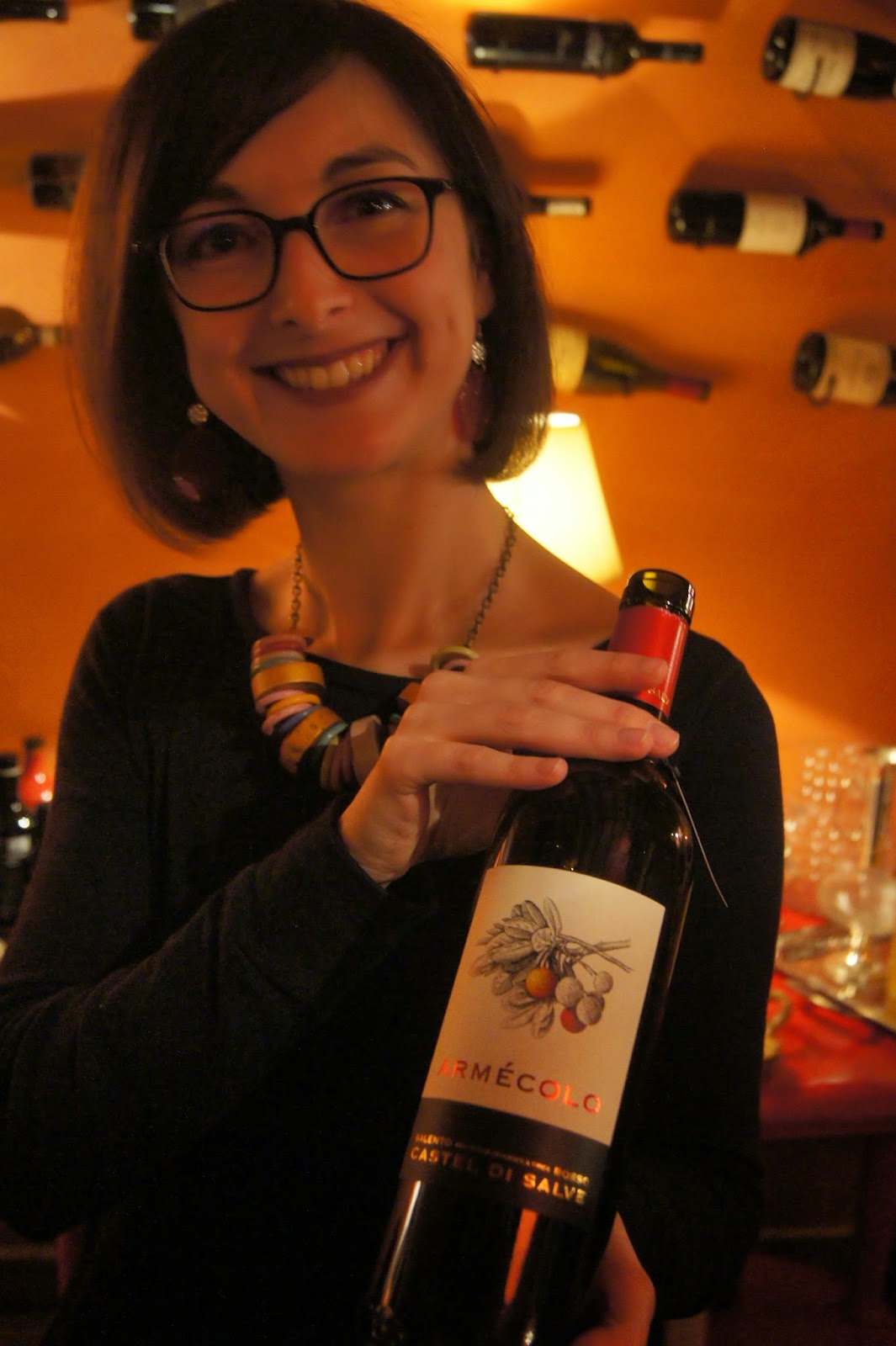 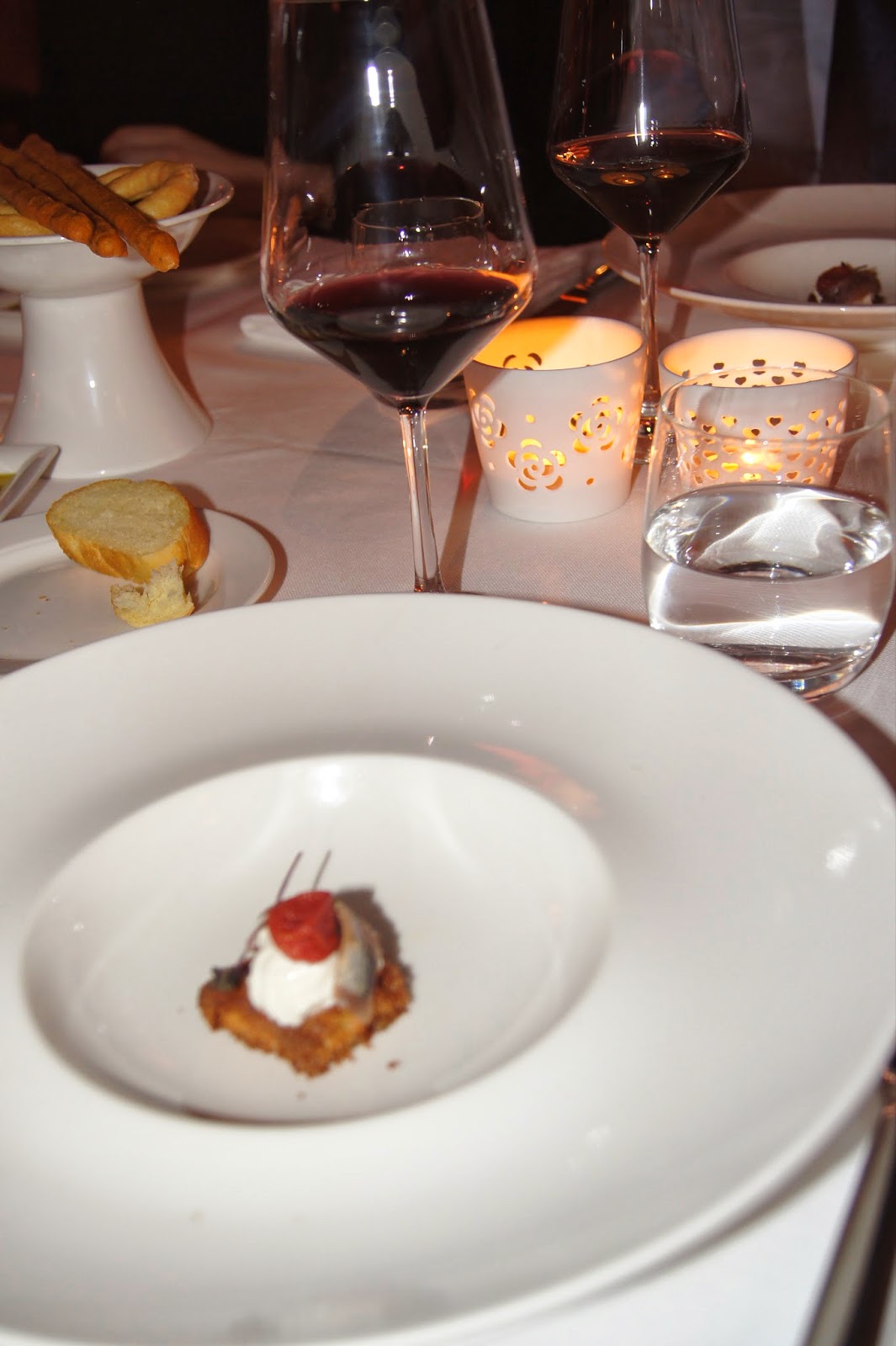 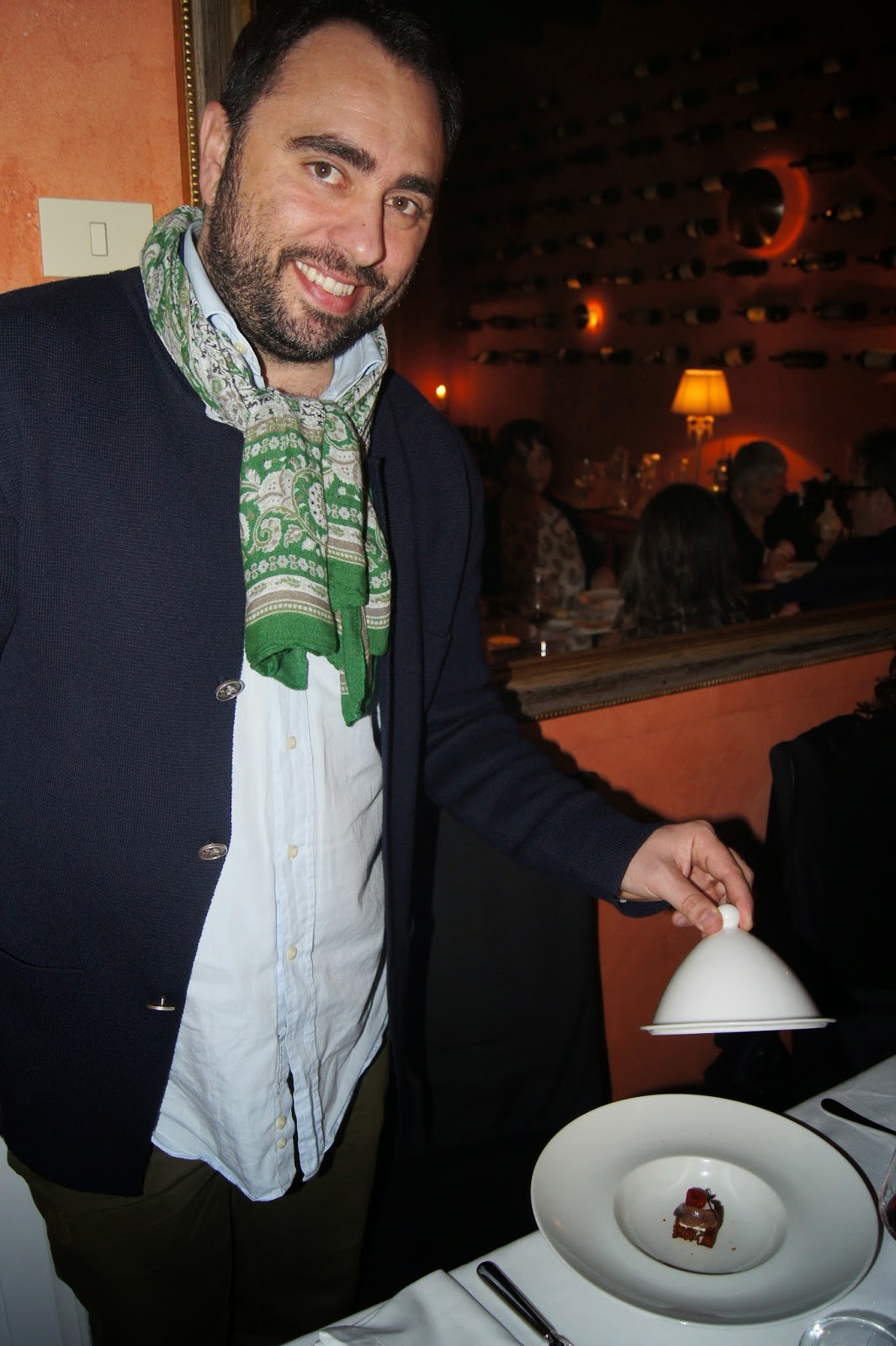 Antonello Magistà dispays the unique presentation of the smoked stracciatella, in which billows of smoke roll forth from the plate 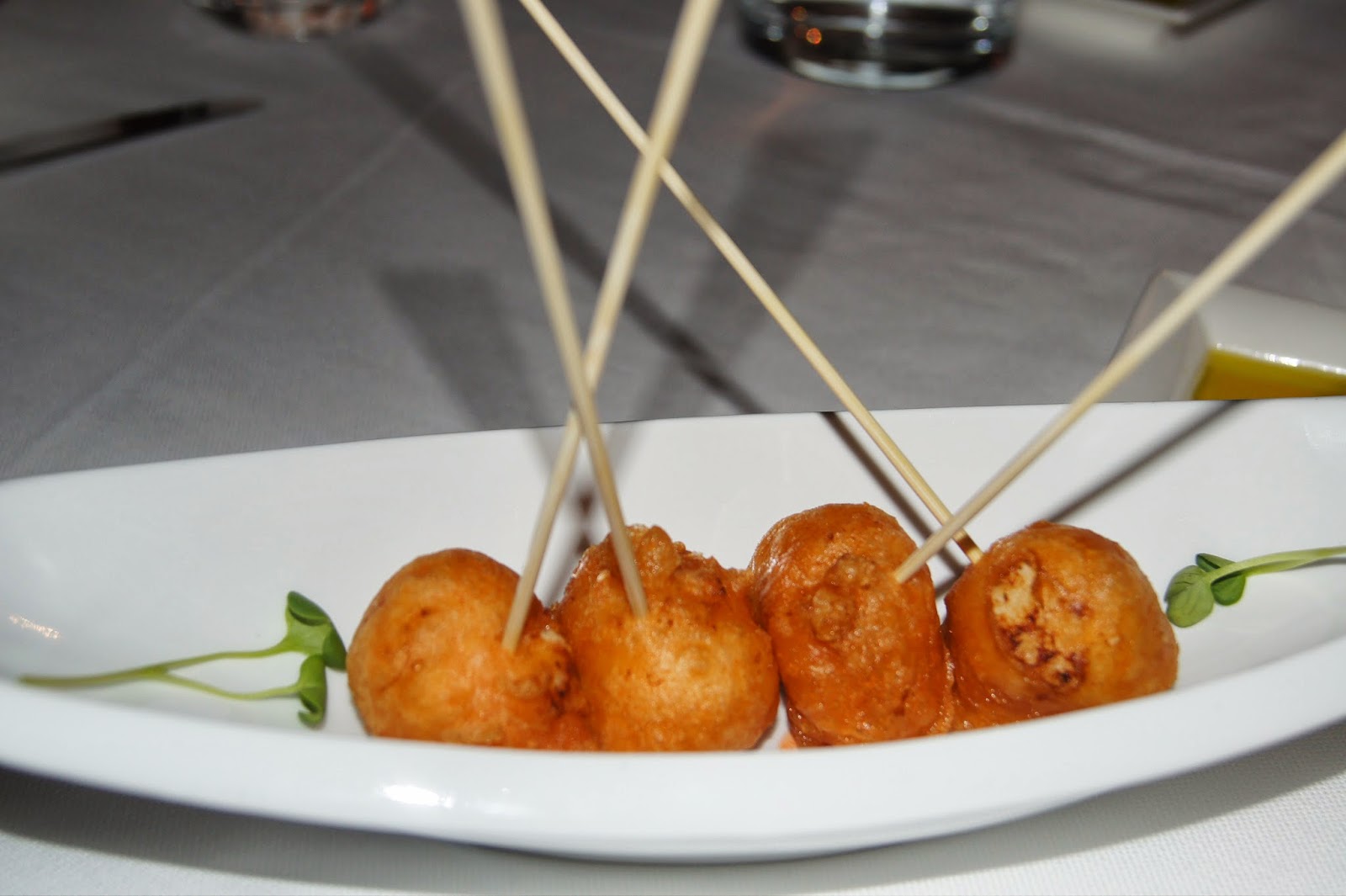 An intermezzo from the kitchem 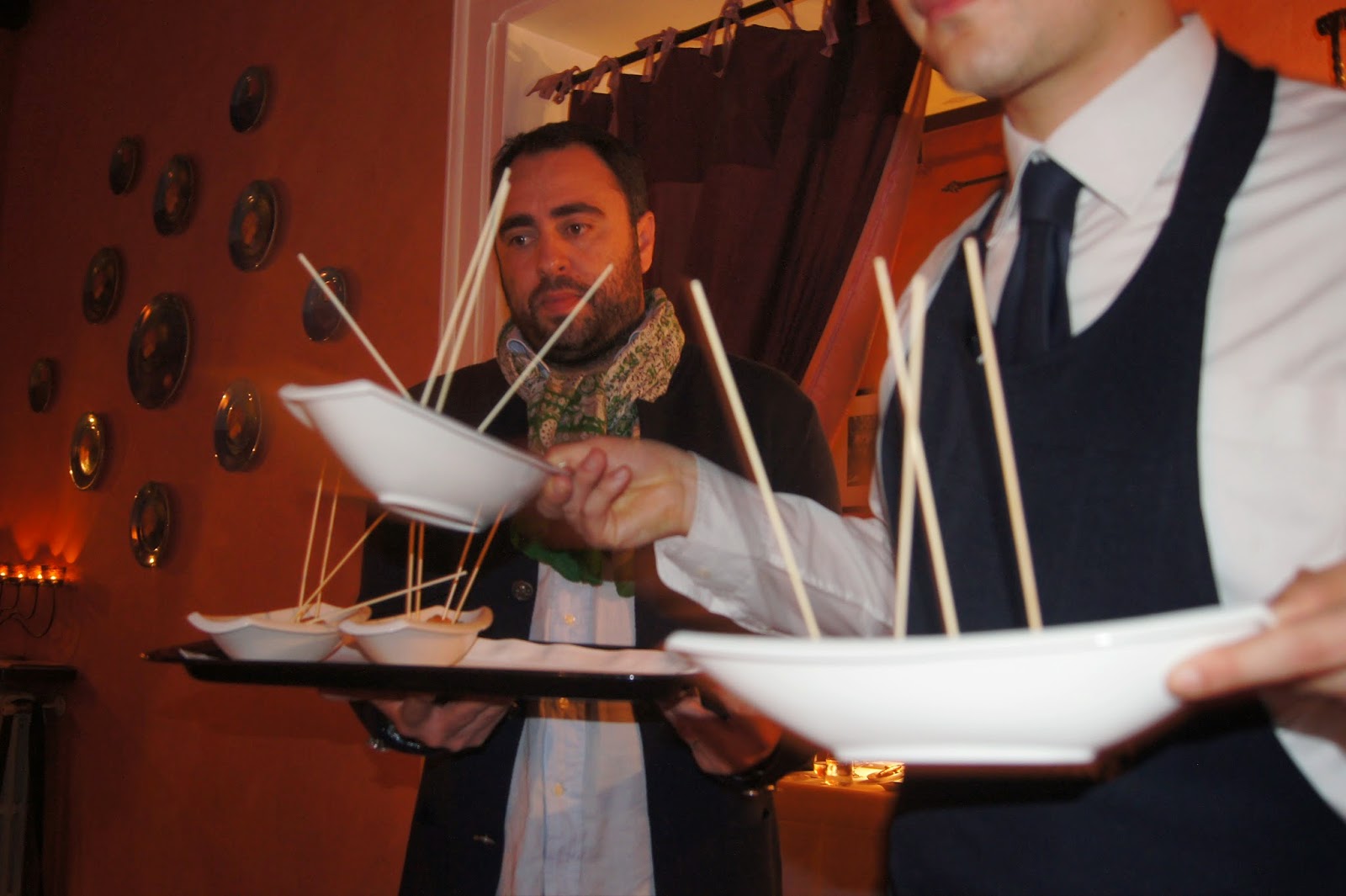 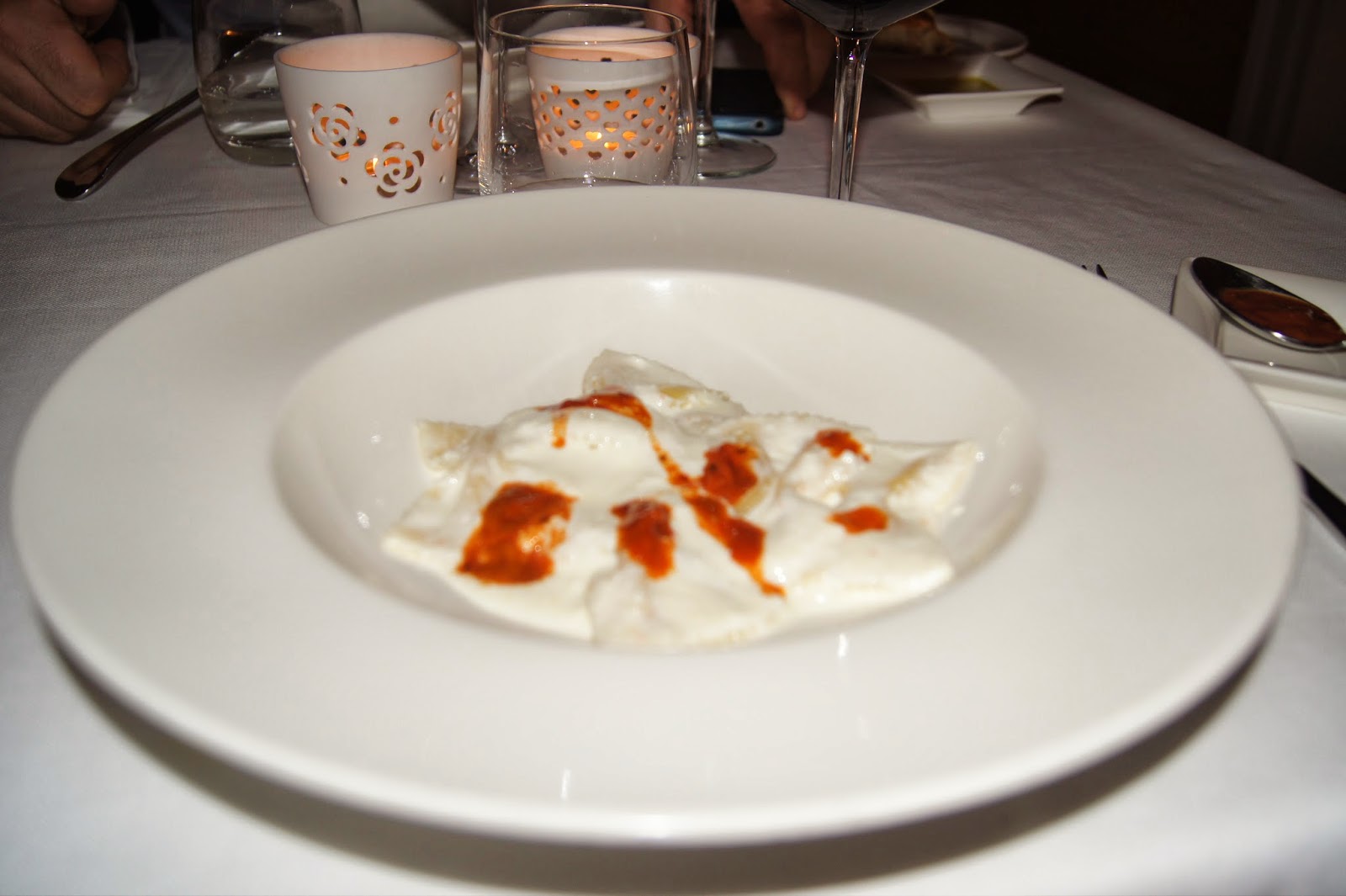 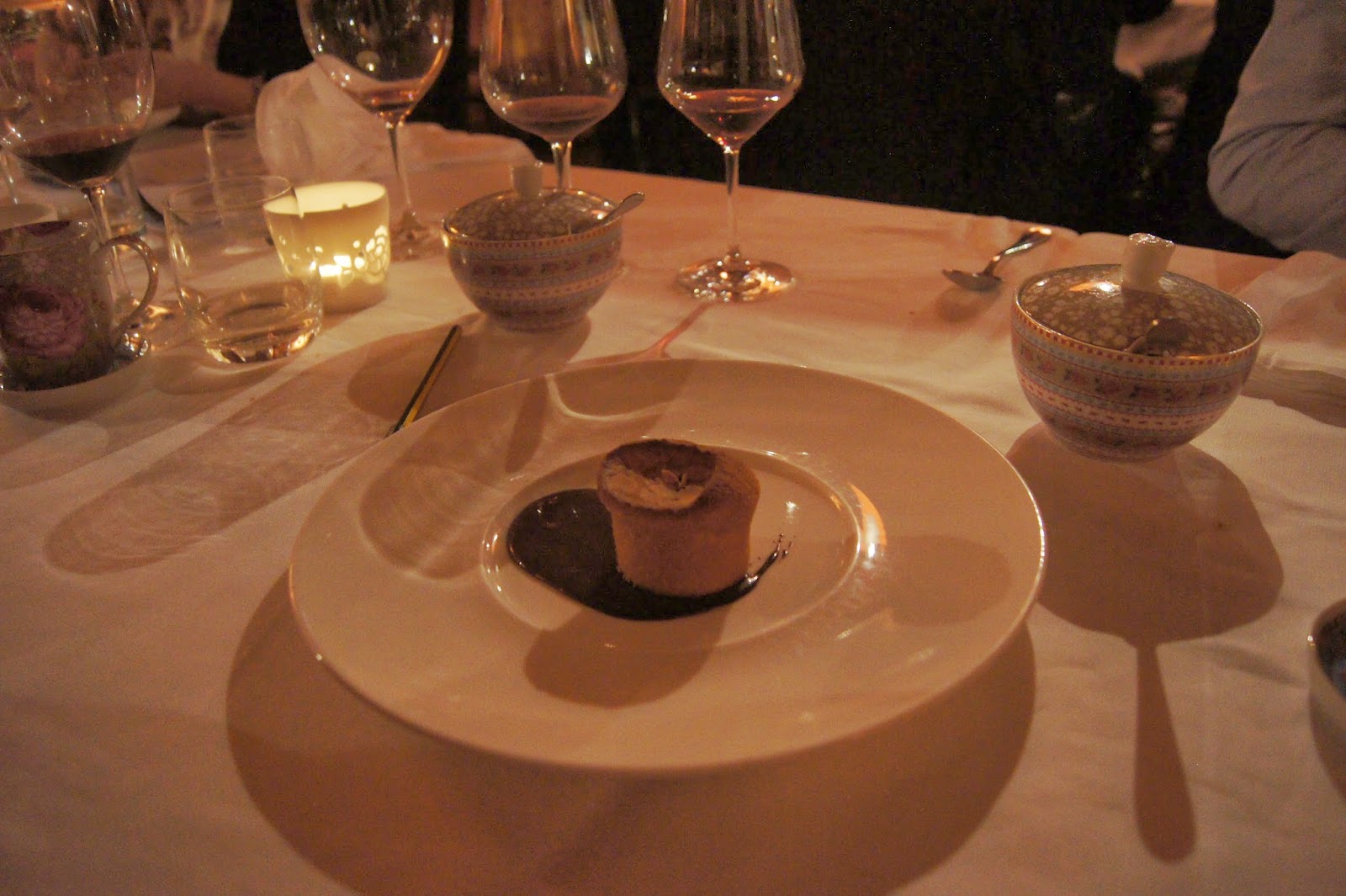 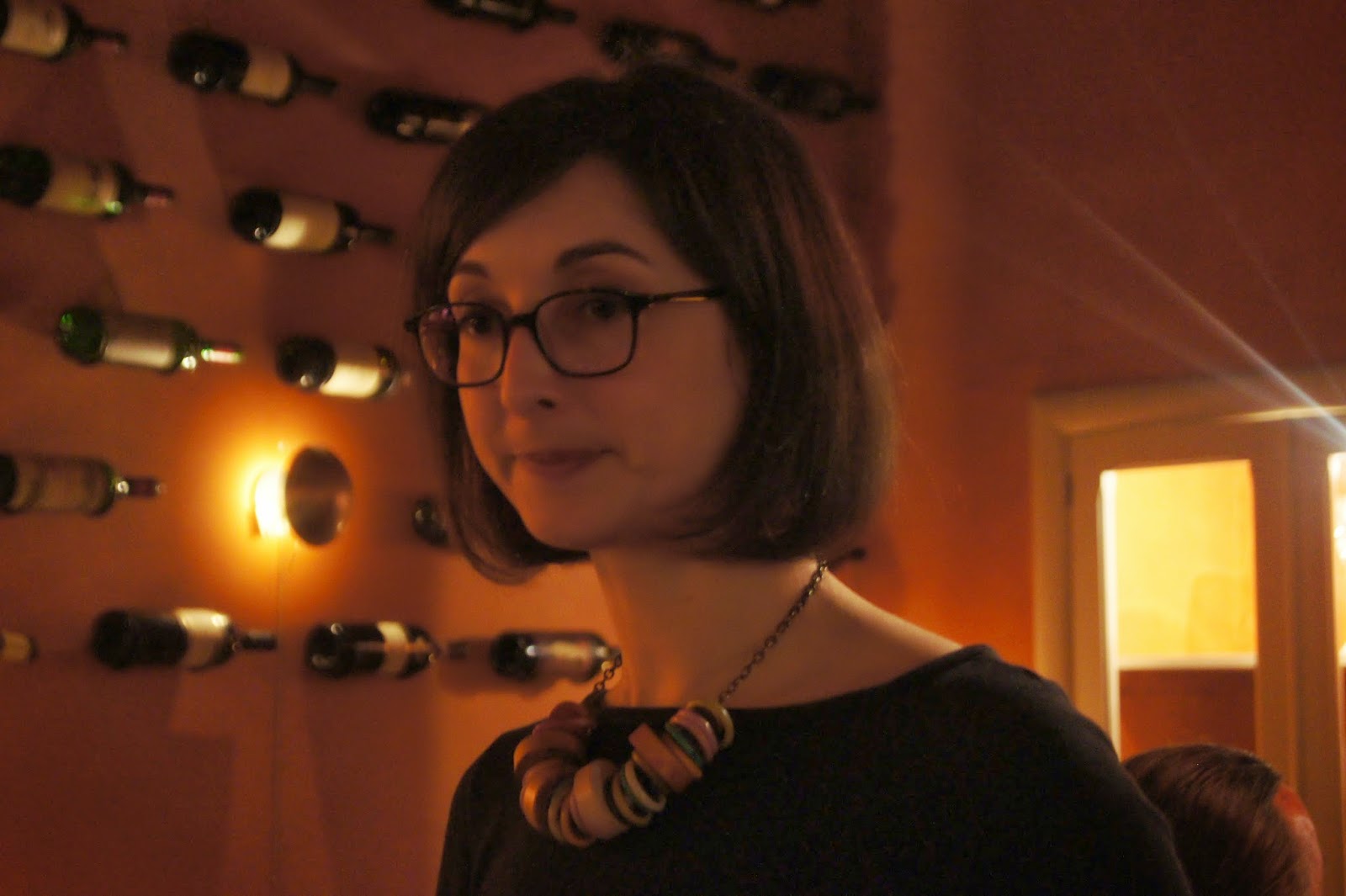 Smoke billowed from the plate as Antonello Magista' ceremoniously removed the white ceramic cones from the single-bite composed dish consisting of a Camomile brioche crouton, smoked stracciatella cheese, with anchovy and confit cherry tomatoes. The fresh forested wood smoke aroma and briny anchovy brought out the crushed violets and tart raspberry flavors of he luciously pink 100% Negroamaro blush wine, Santi Medici Rosato IGT-$19.  The wine from Salento is made from the indigenous red grape (literally translated as Black/black from both the ancient Greek and rustic Pugliesi languages to describe the color of the grape), the juice is left in contact with the skins for 12 hours to achieve the wine's distinctive color, then cold-femented in stainless steel tanks to achieve a perfect balance of fruit and acid.

I asked for, and received an extra helping o fresh-from-the-sea,  sea urchin to drape over my serving of toothsome handmade Farfalle pasta with creamy fresh local ricotta cheese nestled in march-mandarin orange fragrance. The dish was a perfect foil for the subsequent glass of Priante Rosso Salento GT-$25. The 50/50 blend of Negroamaro and Montepulciano grapes lent their juicy black fruit richness, with a hint of oak spices, to contrast nicely with the creamy mouthful and slightly sea mineral richness of the dish.

By far, the star dish of the evening was he locally sourced fresh roasted rabbit with asparagus smothered in freshly shaved white truffles. This deliciously decadent dish was dappled with a  rich glaze made with rabbit stock reduction. Accompanied by Cento Su Cento 100% Negroamro red wine- $35, this was a mouthfilling gastronomic adventure.

A puffy mound of individually made Almond and orange souffle with bitter chocolate was framed by the evening's special treat; Aleatico Passito Salento IGT-$45. The 100%   Aleatico grapes are laid out "passito" style to dry until they achieve a distinctive dried pruney flavor. The chewy licorice and tart plum flavors proved to be a heady experience. An approving nod to the waiter brought a second souffle. It pays to sit near the kitchen and smile a lot.   Abbondanza!

For more on Pasha, visit  http://www.pashaconversano.it/

Posted by Dwight the Connoisseur at 2:32 PM