A unique wine that lets the Napa Valley terroir "speak"

NAPA VALLEY, Ca.---When Robert Mondavi began in winery in Oakville more than 40 years ago, he forged a path grounded in the belief that, above all things, the wine he created should be "reflective of a sense of place." The French have a term for it, "Terroir." Like so many things French, it is an elusive concept, but, at its core meaning, it refers to the specific combination of climate, soil and overall growing conditions that give a wine its unique characteristics. Such a wine is Robert Mondavi 2012 Napa Valley Chardonnay, a magnificent example of Napa Valley terroir and an astonishing $19 a bottle.


Robert Mondavi Winery Director of Winemaking  Genevieve Janssens has masterfully applied her skills as a winemaker to create the winery's latest edition of its Chardonnay in a fashion that allows the terroir of the Napa Valley to speak in resounding fashion.

Robert Mondavi 2012 Napa Valley Chardonnay is only $19.00 a bottle, but the complexity and satisfaction level of its flavor and the extreme care that went into its creation, speaks to a wine many times the price.
This 100% Chardonnay is a perfect accompaniment to the type of easy-to-prepare, light  fare that speaks of spring and summer and endless opportunities for dining out-of-doors. Be it a sidewalk cafe in Chicago's Old Town or New York's SoHo, or a lavish suburban garden party or an infinite evening in the gazebo with fireflies buzzing around the heat lamp, Mondavi Napa Valley Chardonnay is a perfect table mate with its rich flavors of fresh peaches and burnt orange and a touch of toasted almond and hazelnut.
The wine is authentic in its Napa Valley pedigree in every way; 95% of the grapes are sourced there, with 50% coming from the famed Carneros district, known for its ideal growing conditions of warm, flavor-ripening days, and cool nights and mornings. Mild  conditions, coupled with a long growing season with a lack of ill-timed rain, allowed the grapes to mature slowly and evenly, thus ensuring their well balanced flavors. According to Janssens, "the blend is dominated by fruit from the cooler region in the southern end of the valley, where bay fog and breezes allow the grapes to ripen at a gradual, flavor-building pace while retaining refreshing, natural acidity." In addition to the Carneros grapes and grapes from East Napa and Oak Knoll, a small amount of grapes from the famed Stag's Leap district to give the blend just the right touch of opulence. Partial malolactic fermentation and hand stirring of the yeast lees (batonnage) gives the wine added complexity. Partial fermentation in French oak followed by nine months of aging resulted in a seamless integration of oak and fruit flavors. The wine has a rich, creamy finish that goes perfectly with food. The wine could be enjoyed as an aperitif, but its such a rich and opulent blend, its almost a shame not to have it with a good meal. A dish of chicken legs or thighs simmered in a cup or two of the wine with shallots, tarragon and dijon mustard with a few cherry tomatoes thrown in for color is an easy, one dish, summertime meal that would make for a perfect pairing. Bon Appetit!

Rinse chicken thighs in cold water, pat them dry and sprinkle them with flour, salt and pepper
Melt butter in a large, heavy-bottomed skillet and set over medium heat. When the butter foams, add the chicken in batches, browning it until crisp on all sides, set aside.

Add shallots to the pot saute until they begin to soften and caramelize, about 10 minutes, add the wine to deglaze the pot, add the mustard and tarragon, stirring with a large spoon, then add the chicken thighs. Cover and turn the heat down simmering for 30 minutes.

Add the cherry tomatoes, stirring lightly to combine. Serve with some crusty bakery-fresh french bread, pour the rest of the Robert Mondavi 2012 Chardonnay and enjoy. 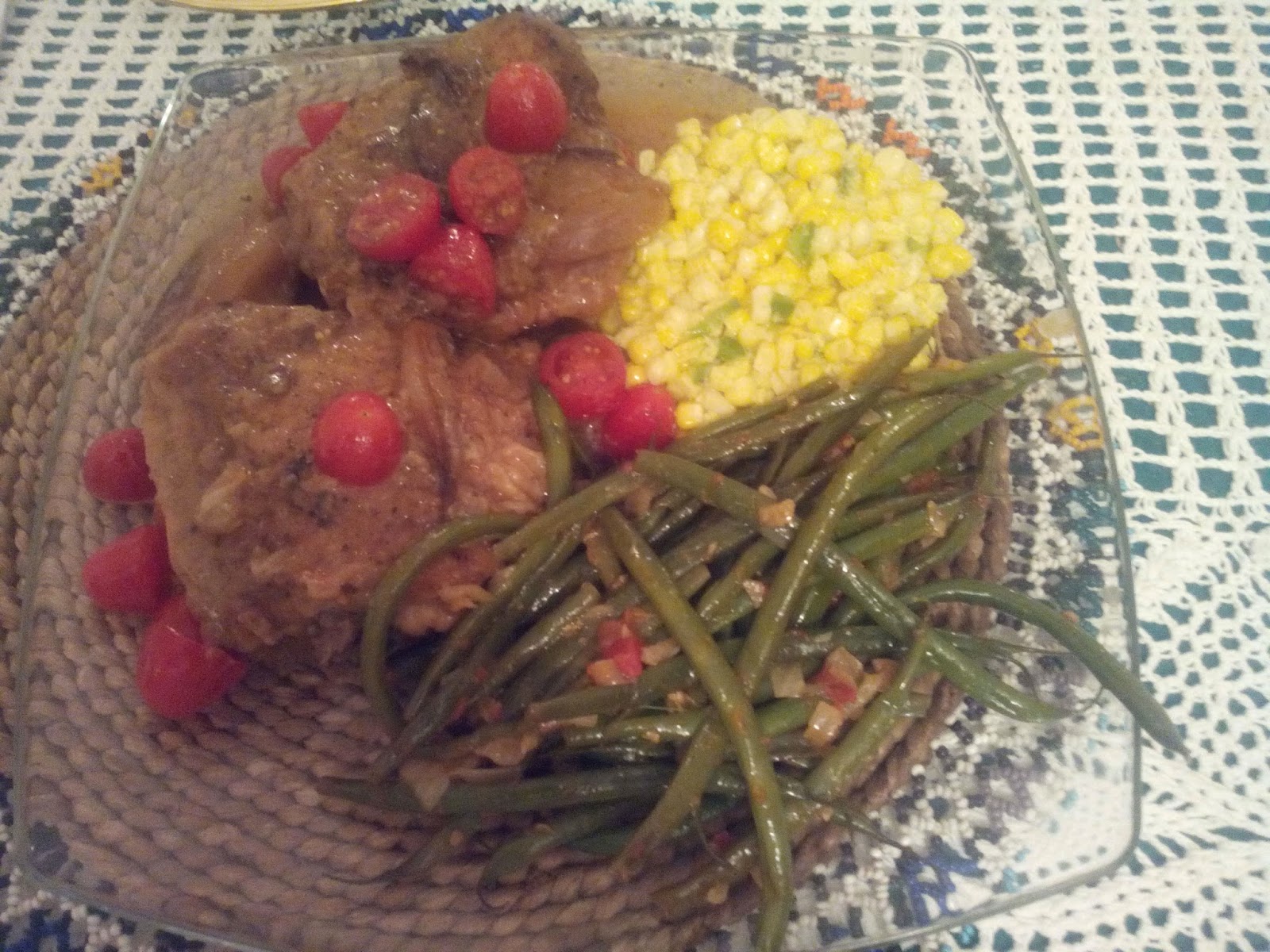 Posted by Dwight the Connoisseur at 6:51 AM