NEW YORK--The names of the wines and their producers may already be familiar to some wine lovers, but never before have the wine producers of the Veneto region of northern Italy embarked on such an ambitious tour to showcase the full depth and breadth of the wines offered by the region.
The Vignaiolo Venetic Wine Producer's Cooperative is currently on its first tour of the United States, following a world tour that started in the United Arab Emirates in December 2014, then moving on to South East Asia before coming to to the USA, stopping over in New York during the annual Fancy Food Show.

Speaking to an intimate gathering of journalists and wine bloggers in a private luncheon at the elegant Lincoln restaurant in Lincoln Center, Giulio Liut, Director of Vignaioli Veneti, emphasized that the primary mission of the cooperative is to promote their best-known brands in foreign markets. Speaking in Italian, with interpretation by Susannah Gold of Vignetto Communications, organizer of the event,  Director Liut went on to say that the great strength of the Cooperative is their ability to work together as a network to promote a territory by uniting producers who represent an entire range of Veneto products, including all of the major wine types, from the celebrated reds such as Amarone and Ripasso, as well as Valpolicella and Bardolino, right through to the whites, such as Lugana, Custoza, Soave and Prosecco. The luncheon gathering explored ten diverse wines from the cooperative, paired with the outstanding interpretations of modern Italian cuisine as presented by the chef and culinary staff at Lincoln Ristorante.


The presentation began with a brief introduction accompanied by an excellent Prosecco Superiore from Ca' Di Rajo of Treviso, the 2013 Valdobbiadene Millesima Extra Dry ($13.98). As an aperitif, this sparkling wine with its bright straw color, delicate and persistent prologue and intense flavors of ripe green apples, citrus and the aroma of Acacia flowers is a perfect prelude to an elegant meal, particularly one paired with such noteworthy wines.

The restaurant offered a choice of Antipasti and Secondi (entrees), including  first course offerings of Whole Grilled Salmon with Green Almonds and Peppers, Spaghettoni with Cherry Tomatoes and Ricotta Salata and Linguine with Poached Tuna, Olive Oil and Fennel with Orange and Chili.

A flight of five white wines were offered for pairing with the first course; Pieropan Calvarino 2013 ($22) from the Soave Classico DOC, Pieropan La Rocca ($30), also from the Soave Classico, Le Creete Lugana 2013 ($23),  made of 100% indigenous Trebbiano of Lugana grapes and described by our hosts as "the new Pinot Grigio," Molceo Lugana Superiore 2012 ($30), also made from Trebbiano di Lugana grapes, and, my absolute favorite of the flight, Ca' Di Rajo Sauvignon 2013 ($8), an estate grown Sauvignon IGT wine of unbelievable complexity and persistence relative to its price. Several of us at my table took turns sampling each other's plates and trying them with the wines. Of my favorites, the grilled tuna was fabulous with both the Ca' Di Rajo Sauvignon with its clear notes of pineapple, yellow pepper and a slight bitterness as you'd find in tomato leaves. There's just a hint of wood, although I believe the wine is aged in large, Slovenian type barrels, which impart little wood, if any, flavor. The smoky aftertaste may owe more to gravely soil and old vines more than anything. This is a beautifully structure wine, with nice acid astringency that draws the cheeks and a nice long aftertaste with dancing flavor notes on the palate. Likewise, the  Pieropan Calvarino 2013 ($22), the "Little Calvary," so named because of its rich, dense volcanic soil and steep hillside attitude which makes for a tortuous climb for harvesters. A blend of 70% local Garganega and 30% Trebbiano di Soave grapes, this is the second most highly rates wine of the Soave Classico region and consistently ranks as among the top 10 wines of the region. The hints of elder flower, lemon and cherry made it a perfect match with the Linguine with Poached Tuna.

The flight of red wines was served with a flourish. The wine stewards moved about the tables like the corps de ballet of  American Ballet Theatre-ABT,  at the neighboring Metropolitan Opera House. The first wine in the glass was La Fontana Valpolicella DOC which bears the designation Vino Biologica, which means Organic Wine ($15). The grapes are hand-picked and part of the grapes undergo a 15-20 day drying period, which gives the wine added richness. The next was La Fontanina Amarone Della Valpolicella DOCG, also Vino Biologica, or Organic ($54). The grapes are handpicked and only the ripest make the cut. They rest for 5-6 months in small wood crates before they are crushed and even then, they spend at least another month macerating on the skins. After fermenting in stainless steel tanks, the wine is then aged in small wooden barrels for 3-4 years. The result is a rich Ruby red wine with high alcohol content of 17%. This is a wine to serve with pheasant or venison and aged Gorgonzola It is also intended for aging for another year or two after purchase, but I can't imagine anyone bothering to do that. It's perfect now.  Arusnatico Valpolicella Classico Superiore Ripasso 2013 ($17) is a highly rated wine, with a relatively low price tag. Past vintages have earned the Decanter World Wine Awards, and while not as widely known as other wines from the region, has earned high scores from both Wine Enthusiast and the Wine Spectator. The grand finale was Morar Amazon della Valpolicella Classico 2007 ($58), a blend of 70% Corvina, 25% Corvinone and 5% Rondinella, all indigenous grapes that are late harvested in late September and early October and which go through a laborious hand-selection process in which only the best parts of the bunch are selected for drying for 90 days. The wines are left on the skins for 40 days before fermentation. The wine is then aged for a year in large Slovenian oak casks and then in small French oak barriques for another 18 months. After that, it is aged for another 6 months in the bottle. I can't tell you how rich and aromatic this wine is. You will have to experience it for yourself. a Prime Aged Steak or Venison steak come to mind, but I'd actually prefer it with an Obama-blessed Cuban cigar, preferably a Maduro!

The Secondi, or main courses included Pekin Duck Breast with a Confit of Duck Leg, Baked Peach, Mustard Greens, Green Peppercorn and a Cardamom glaze. This was, by far, the most successful pairing with these strong, aromatic wines. No one at my table ordered the Grilled American Wagyu Top Sirloin with Parsnip Puree and Spring Onion with an aged Balsamic glaze. I'm sure you can find a recipe online and do this one yourself at home. It might make for an interesting gourmet grilled dinner this summer. Eggplant Parmigiana with Bufala (water buffalo) Mozzarella was the hands-down winner. The nutty flavors of the eggplant melded perfectly with the wine and the dense tomato and earthy cheese coating only served to enhance the richness of the wine. Bravissimo!

Dolci (desserts) were an assortment of aged cheeses with apricot, dates, olives and Millefiori Honey and Fig-Mirto Conserva as condiments. It was accompanied by  a magnificent Hazelnut Bread which I must confess that I took  home and had  with a Decaf Cappuccino while watching late-night Frasier on cable. It doesn't get much better than that.  Abbondanza! 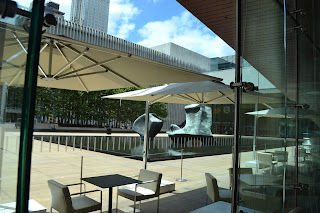 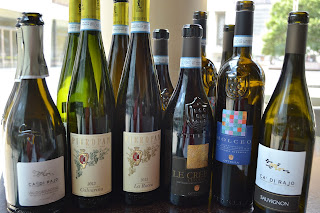 The wines of Vignaioli Veneti 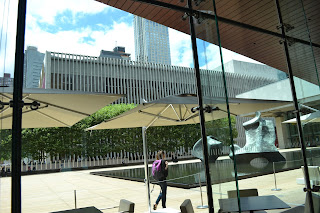 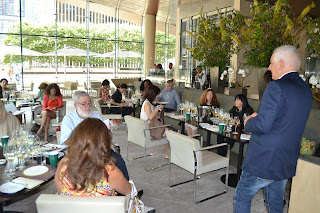 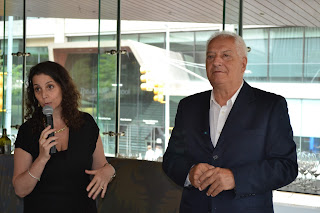 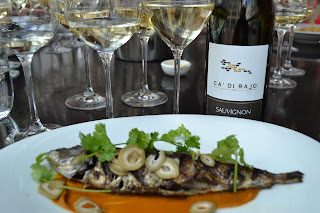 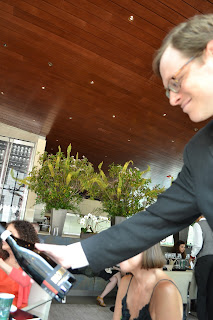 The almost balletic wine and food service at Lincoln Restaurant 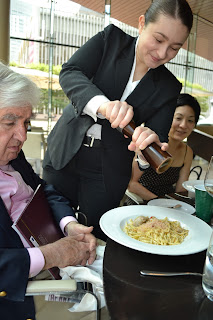 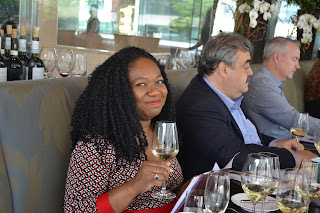 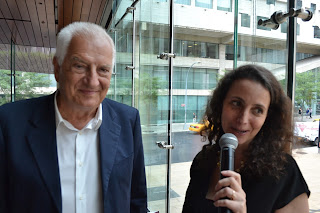 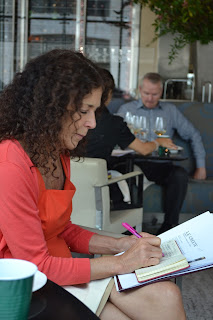 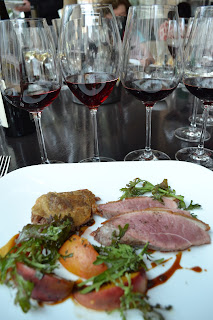 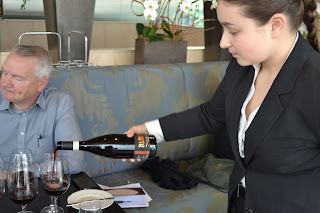 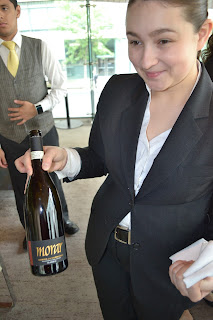 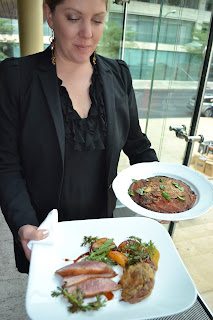 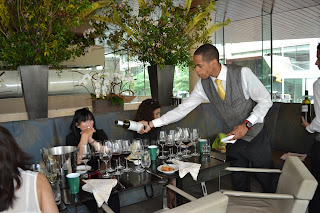 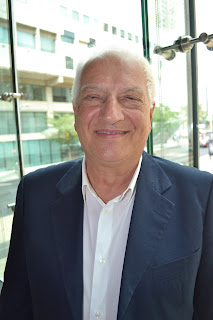 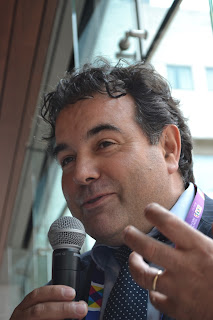 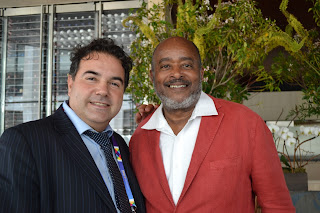 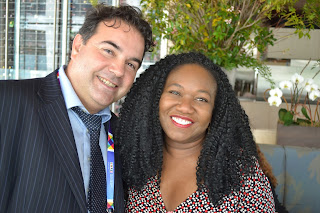 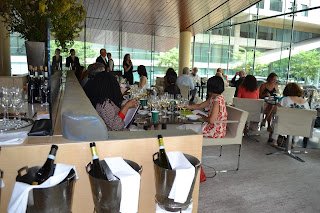 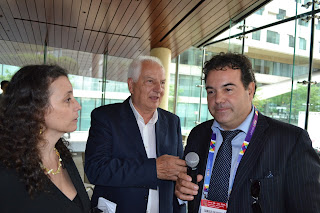 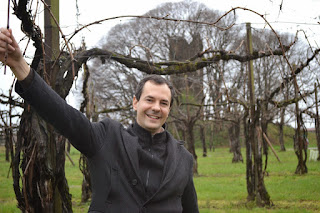 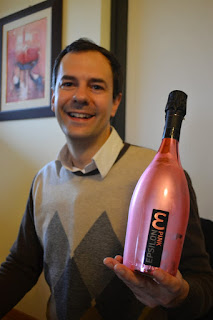 Luca Ortoncelli with his new Epsilon Sparkling Wine, just arriving in the U.S. 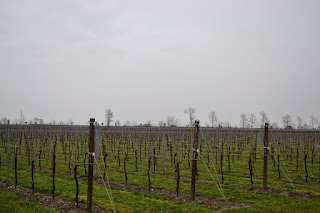 The vinedyards and (Below) 15th Century Church at Ca' Di Rajo 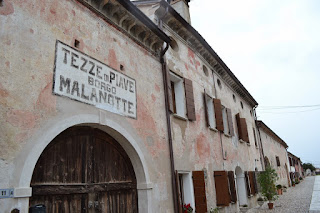 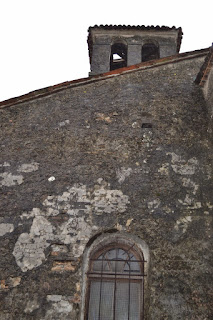 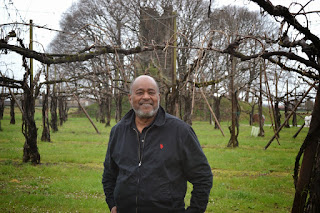 Dwight Casimere in the vineyards at Ca' Di Rajo in Treviso, Italy
Posted by Dwight the Connoisseur at 3:32 PM