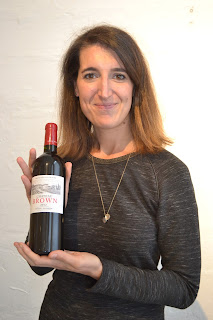 Below: The Estate at Chateau Brown in the Pessac-Leognan 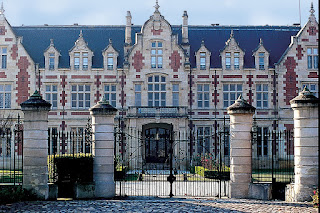 NEW YORK--Daniel Boulud's  flagship French restaurant DANIEL off Park Avenue was the elegant showcase for the premiere pouring of the new vintages of Les Vins De Graves at the start of their USA Tour 2015.

Graves is the birthplace of Bordeaux and its most important subregion. Situated on the Left Bank of the Garonne River, its vineyards date back to the Middle Ages. The wines, particularly the Reds, are marked by their distinctive flavors of concentrated fruit and underlying minerality, which derives from the unique oil The name Graves is literally derived from the region's intensely gravely soil. It is composed primarily of quartz deposits keft behind by glaciers from the Ice Age. The quartz can still be found in the soil of some of the top winemaking estates. Considered the birthplace of the red wine blend known as Claret, wines of the Graves are unmatched in their finesse and elegance.
Eighteen producers poured more than 40 spectacular wines. The whites (Blanc) were primarily blends of Semillon and  Sauvignon Blanc grapes, the Reds (Rouge) were primarily blends of Merlot, Cabernet Sauvignon and sometimes either Petit Verdot or Cabernet Franc. The winemakers each used varying methods of vinification; some wines were fermented in stainless steel, others in oak casks. Most were aged in new or used French oak barrels, but some winemakers opted for concrete of glass-lined concrete vessels for aging, in order to maintain the purity of the wine's fruit flavors. Each of the methodologies drew vastly different results, even though the wines may have been made from identical grapes. That's the beauty and the joy of attending a wine tasting such as this. It gives one a real opportunity to appreciate the craft of the winemaker, which is really an alchemic blend of art and science. 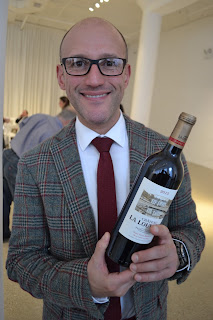 Laurent Belisaire of Chateau La Louviere with his 2012 Rouge 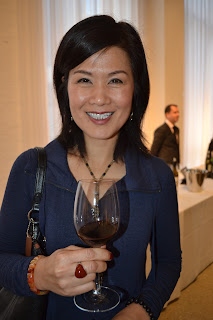 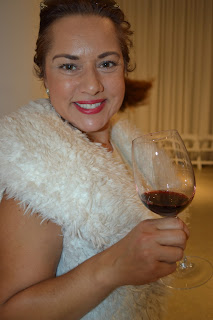 WINES OF PESSAC-LEOGNAN
In addiiton to presenting the new wines from Graves, the tasting tour featured wines from the Cru Classe de Graves and wines of the Pessac-Leognan appellation, the grouping of the ten communes to the North of the Graves region, created in 1987. 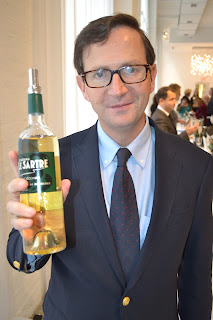 Eric Fourault representing Chateau Le Satre with their 2013 Blanc, a blend of Sauvignon Blanc and Semillon

All of the great names were there; Chateau De Chantegrive, Chateau Pont De Brion, Thomas Barton, Chateau Brown, Chateau Olivier. These are spectacular wines that were presented in equally spectacular settings, which showed off a kaleidoscope of flavors. 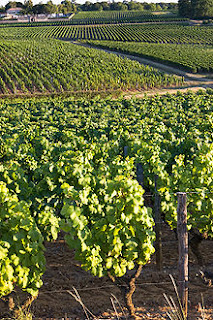 A Sauterne vineyard in the Graves 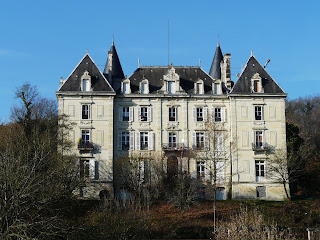 Chateau Roche Lalande in the Pessac-Leognan
Below: 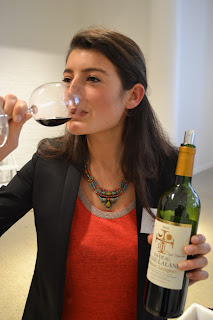 Lea Rodrigues-Lalande takes a sip of her 2010 Rouge blend of Merlot, Cabernet and Cab Franc

Some favorites: Chateau Brown 2004 Rouge-$65, a sumptuous elegant blend of  56 Cabernet, 40% Merlot and 4% Petit Verdot.  Aged for two years in small French oak barrels, the wine was rich and very well rounded with well integrated tanins. A lingering smoke and subtle flavors of baked apple spices made this a satisfying mouthful of wine that will pair greatly with aged Prime Steak, a Standing Rib Roast for the Holidays or roasted pheasant of goose.

Chatea La Louviere Blanc 2012, a blend of 90% Sauvignon Blanc and 10% Semillon-$29. This wine gets no oak aging and derives its rich flavor of ripe citrus and notes of pink grapefruit, beautiful white flowers and crisp acidity purely from the fruit which is fermented in stainless steel and held in glass-lined concrete vessels. Enjoy this wine with a variety of cheeses or a holiday platter of assorted crisp veggie crudite, ham and other charcuterie.

Posted by Dwight the Connoisseur at 9:45 AM