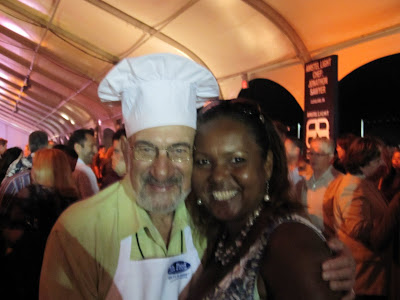 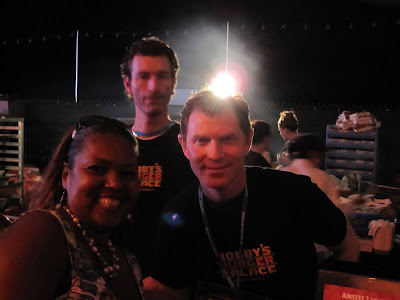 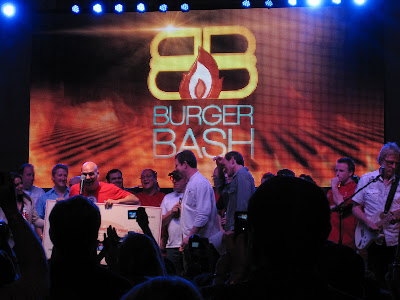 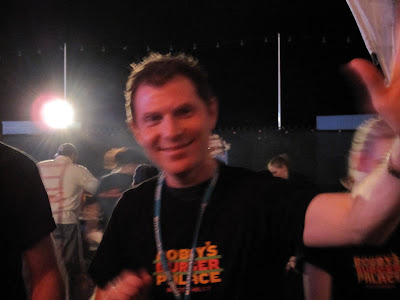 South Beach, Miami Beach, Florida—For four glorious days in this sun-drenched tropical paradise, the stars of the Food Network hovered over South Beach and its most luxurious resorts, like the celestial formations that hung in the brilliant nighttime sky.

I was privileged to have a front row seat (or Cabana, if you will) at some of the most star-studded events as special Guest Reporter for Dwight The Wine Doctor, who was called away on special assignment in the Napa Valley. I got to rub shoulders (and, in the case of the cuddly Mr. Food, cheek-to-cheek), with Food Network’s top names.

Racheal Ray celebrated her fifth year as host of the Amstel Light Burger Bash presented by Allen Brothers on the beach at the Ritz Carlton, South Beach. Food Network stars reigned supreme on the stages of the Wine & Food Festival tents, that dominated South Beach, and in the ballrooms and Great Halls of the region’s top resorts. The names of the locales are legendary, Ritz Carlton, Loews Miami Beach, W, Delano and Fontainebleau. The names of the presenters are equally legendary; Emeril, Paula Deen, Guy Fieri, Bobby Flay and Glada De Laurentiis, to name just a few, presided over the unprecedented events. This was truly the “Rolls Royce” of foodie events and Dwight The Wine Doctor, through yours truly, was front and center!

One of the ‘first nighter’ events and one of the most coveted tickets outside of the Burger Bash was the late nite “Let Them Eat Cake” event hosted by Emeril Lagasse and Martha Stewart. The pastry pandemonium was held at the architecturally stunning terrace and atrium of the Herzog & Mueron Building at 1111 Lincoln Road, the “Rodeo Drive” of South Beach. First of all, the views of the Miami Beach skyline from the open-air party venue, are stunning as were the dessert offerings. Martha Stewart, known for her impeccable taste, and Emeril Lagasse, known for his culinary artistry, designed a confectionary castle that would make even Marie Antoinette “lose her head” long before walking to the gallows!

There’s no other food and wine event in the world like the Food Network South Beach Wine & Food Festival, and this year’s was off the charts. The festival, with its billowing white tents, took over the virtual entirely of South Beach.

The sounds of glasses clinking and being filled with libations and elegant wines, echoes up and down the beach.
The sound of grills sizzling and smell of food being prepared by some of the nation’s and Miami’s top chefs, greeted attendees as the snaked their way through the multiple tents. The aroma in the air was intoxicating. The lingering sensations and the lasting savor of the many tastes and palate pleasantries will remain in memory long after the tents have been folded away. I don’t know about you, but I’ve already reserved my place at next year’s festival!

Posted by Dwight the Connoisseur at 9:53 PM