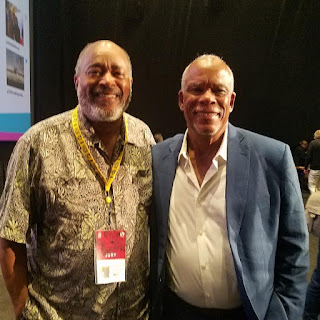 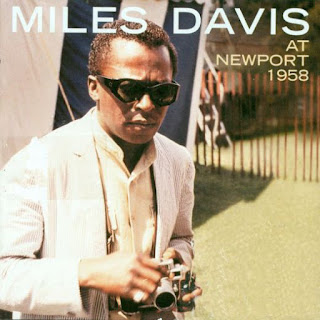 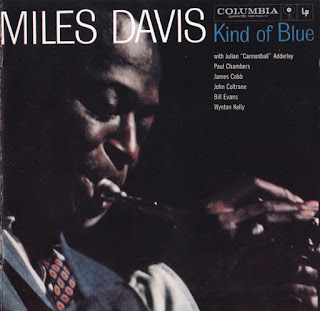 Director Stanley Nelson (The Black Panthers: Vanguard of the Revolution) casts a filmmaker's Kleigl light on one of the most enigmatic and enduring musical figures of the last century in Miles Davis: Birth of the Cool, which had its Florida Premiere at the Miami Film Festival.

With numerous never-before-seen video and still images of the 'Picasso of Modern Jazz" interlaced with revealing interviews by entimes  such as long-time wife and muse Francis Taylor Davis, who at 80, offered the most illuminating insights into his prismatic character, the French chanteuse Juliette Greco, an early flame during his life-changing matriculation in Paris, to musical historian Stanley Crouch, jazz impresario George Wein and fellow musical compatriots and collaborators Wayne Shorter and Herbie Hancock, among others. The film is a vivid portrait of an artist who defies category, yet remains one of the most significant cultural signposts of modern times.

Miles Davis has won more Grammy Awards than any jazz musician in history. With 23 nominations, he has won 16 Grammys, including 7 Grammy Hall of Fame awards and two Grammy Lifetime Achievement Awards. Only the great Duke Ellington comes even close.

Born in Alton, Illinois in 1926, to a father who, as a dentist and farmer, was the second richest man in Illinois, Black or White, Miles Dewey Davis seemed destined for greatness. An early stint  with the Billy Eckstine Orchestra introduced him to Charlie Parker and Dizzy Gillespie, and that set the dynamics in motion that propelled him to 52nd Street in New York, ground zero for the new musical art form known as bee-bop.

Davi's' mother had wanted him to study the violin, but, thankfully, his father won over with the trumpet. His father's intention for young Miles to attend Julliard came to an abrupt end, after the fledgling student cried 'foul' to his composition instructor who had launched into a lengthy diatribe on the roots of black jazz in the agony of the slave hollers of the South. Without hesitation, Davis shouted from the back of the classroom "You're a damed liar!!!" Thus an otherwise promising tenure at Julliard flamed into ashes.

52nd Street welcomed Miles with open arms and his career flourished. An appearance at the Newport Jazz Festival, in which he introduced his novel technique of nestling his muted horn directly into the microphone, thus creating a hushed, intimate sound that was both arresting and mystical, caught the attention of Columbia Record executives who instantly signed him. His subsequent recordings, featuring never-before conceived multi instrumental aggregates wit the likes of John Coltrane,  including orchestral settings with the legendary arranger Gil Evans, that bordered on the Classical, quickly catapulted Davis into the mainstream. These recordings became the genesis of the Birth of the Cool, a series of landmark recording sessions that featured arrangements that borrowed more from the likes of French Impressionist composers like Eric Satie and Claude Debussy than the jazz arrangers of the time. The albums featured a virtual whose who of current musical stars, who were celebrated arrangers and composers in their own right; Pete Rugolo produced the sessions (You might remember him as the composer for that great 1960s TV series The Fugitive with David Janssen). Other luminaries onboard included the great pianist and composer John Lewis,  who lent several of his arrangements. Likewise, Gil Evans, baritone saxophone master Gerry Mulligan, Lee Konitz, Kai Winding, Kenny Clark on drums, were all part of the rotating cast of musical greats. The recordings were instant sensations and changed the direction of jazz. There had been nothing like the Miles Davis nonet seen before or since.

Further collaboration with Gil Evans on the Porgy and Bess and Sketches of Spain albums,  melded Davis' jazz artistry with orchestral embellishment, which again, crossed all musical boundaries.

Miles was a mountain of contradictions. He was the epitome of cool with his bespoke Brooks Brothers suits and incandescent colored Feraris. He was also brutal, beating his wives and lovers with the regularity of a metronome beat.

Delving deeply into Davis's labyrinth of a psyche, including his addiction to pain killers following  life-altering encounter with hip surgery and later bouts with lethal combinations of whiskey (and milk), illegal drugs and prescription pills compounded by insane jealousy and spousal abuse, the film holds no bars. Frances Davis recounts one particularly crushing encounter with the famous Davis temper and domestic violence when she innocently commented how handsome his friend and fellow-musician Quincy Jones was. That resulted in a floor-embracing smack-down, that signaled the beginning of the end for their relationship. She also tells how she had been cast by the great Jerome Robbins as the front line dancer for the original production of West Side Story. The male chauvinist in Miles couldn't allow her to outshine him on the Broadway stage and he made her choose between the production and him and their family. She did so reluctantly. In the film she talked of how every opportunity she had to get away from the kids, she would run upstairs to their bedroom to caress her dancing shoes.

An early vignette focused on his perspective-changing trip to Paris in the 1940s, where he basked in the glory of life without racial prejudice. There is footage of his alchemy. The film shows him scoring the music to Jeanne Moreau's film "Elevator  to the Gallows (L'ascenseur pour l'echafaud). Miles stands in the darkened screening room,trumpet in hand, while  the film's images unfold before him on the screen. He plays  impromptu, while watching the footage of Moreau walking down a darkened street toward some undetermined fate. This is the essence of a  creative genius in action!

His mysterious 'retirement' for more than a half dozen years is also dealt with as well as his reemergence as a cult icon with the hard rock and electro-funk explosion of Bitches Brew, which many consider the bedrock of Hip Hop and Fusion Jazz. Jazz historian Stanley Crouch does his best to debunk the album in his interview, but history and public opinion say otherwise.

The film also shows another surprising element of Davis' life, his sudden passion for painting and expressionistic art, that also was connected with is pursuit of  was his final life-mate, the artist Jo Gelbard, whom he pursued, in her words, "like the Vampire suddenly coming to your door."  She shares the gripping details of his final moments during which she was with him at his last breath.

Miles Davis: Birth of the Cool is an unvarnished look at a genius who is both famed and flawed. Who was at once Promethean and self destructive  and who,  like Icarus, took the wings of genius beyond reasonable limits and  flew too close to the sun.

Miles Davis: Birth of the Cool, covers far more ground concerning the musician than this review can reflect. You have to see the film to appreciate the full breadth and depth of this man's astounding life. There's one moment, for example, when, just on the eve of t he release of Birth of The Cool, Miles is beaten to a bloody pulp by a racist cop for standing and smoking a cigarette outside the Blue Note, where he was performing. He had just escorted a white female fan and patron to a cab (which I'm sure the cop saw, much to his chagrin), and was promptly told by the cop to move along. Davis, of course, refused, pointing to the club marquee with his name on it. His beating and subsequent arrest drew headlines. Beyond the notoriety, it served to do more. It crystalized in Davis' mind his racial cynicism.


The documentary is voiced by actor Carl Lumbly, best known for TVs NYPD and Cagney and Lacey. He does a credible job of mimicking Davis' characteristic raspy voice, which was brought on by the musician's refusal to remain silent following surgery to remove a non-cancers malignancy from his throat. In addition to duplicating Davis' voice, the actor bears an uncanny facial resemblance to his subject.

The film is being distributed by the BBC and will make its way to PBS and American movie theaters sometime in June, according to director Nelson. It is both instructive and revealing, but above all, riveting. Don't miss it.

Posted by Dwight the Connoisseur at 4:09 PM