WINES OF THE WEEK-THE WINES OF MOSCATO D'ASTI ON ZOOM 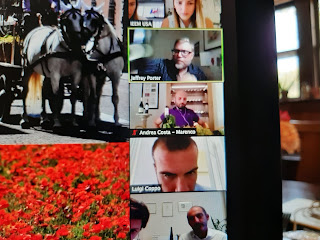 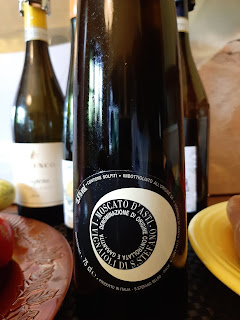 Some of the Wines of Moscato d'Asti that were presented

Moscato is most likely the first wine that many people experience in life either at a wedding reception or other family gathering, as a gift, or on a first date. As one wine writer surmised, “it’s the gateway drug of the wine industry and, fortunately, one that we just can’t stop drinking.”

That fact was brought out with uncompromising clarity in a recent Zoom conference with five producers from the Moscato D’ Asti DOCG coordinated by IEEM (International Event and Exhibition Management), the agency specializing in marketing, organizing and managing events, exhibitions and public relations for the wine industry.

All of the wines were from the Moscato d’Asti, a wine region in northwest Italy, produced primarily in the province of Asti. The wine is also produced in the smaller nearby provinces of Alessandria and Cuneo.

Located in the Montferrat of Piedmont, it is an area dotted with Medieval castles and steep hillside vineyards, most of which can only be navigated on foot. The ancient Tower of Montferrat looms over the region like an ancient sentinel guarding its storied treasures and dark secrets.

Winemaking goes back to the time of the ancient Romans, who called the area Apiana.

“The word for bees in Italian is Ah-pay (ape),” proffered Luigi Coppo of Coppo 1892.  “The grape that is now called Muscato Bianco was first planted in the 12th Century. In Latin language, it was called Muscatellum. The region was called Ape (bees) because the bees would hover on top of the grape clusters because of their unique aroma.”

Moscato bianco is the grape from which Moscato d’ Asti is made. It is one of the oldest grapes grown in the area. The sweet, low alcohol wine (usually around 5% alcohol) was originally reserved for the workers to refresh themselves during their midday meals or for just after the workday was done. The low alcohol wine could be had at any time of day without slowing the pace of the workers. Moscato d’Asti was also the wine of choice for the traditionally long, multicourse evening meals. The wine both cleansed the palate and stimulated the appetite for dessert.

The tasting session was a revelation. Although the wines were made from one grape, those from each of the five producers were distinct. The tasting proved the versatility of Moscato d’Asti and its ability to be paired with a diverse array of cuisines, from soft cheeses, to seafood, pastas and spicy dishes. The choice is as widely varied as your imagination will allow.

One of the journalists who participated in the conference was wine and travel writer Julia Coney of JuliaConey.com. She recalled our media trip to the Langhe in December, 2018. We were hosted by Eduardo Vilarino Gancia-owner of the Gancia Castle at Canelli. There, we had a marvelous luncheon overlooking the valley. It consisted of Gancia Moscato d’Asti Secco and housemade 23 egg-yolk pasta covered in shaved white Truffles, which were offered at the height of Truffle Season. It remains to this day, the most exquisite meal I’ve ever had. Simple. But oh, so elegant! More on Gancia and its place in the Moscato firmament later.

“Moscato d’ Asti is the most widely consumed sweet wine in the world,” Coppo emphasized. “The DOCG is also one of the largest and most diverse in the world. Moscato d’Asti is not only consumed as a dessert wine, it is also an everyday wine.”

Moscato’s popularity began to soar in the 1990s and continued to do so into the Millenium. From 2011 to 2014, Moscato d’Asti sales in the U.S. increased 73%. Consumers under the age of 45 have been the motivating force behind the sales increase that has hovered around a 10-15% increase each year.

The reason is simple. The wines are both approachable and affordable. Inexplicably, the wine has also become the darling of hip-hop culture, with Trey Songz and Drake referring to Moscato in their 2009 hit “I Invented Sex.” Granted, Moscato d’Asti has been credited with sparking many a romance, but I’m not quite sure that its producers had that in mind when they started out!

Coppo Moncalvina 2019 ($18.99) is the winery’s flagship wine. “Moncalvina is the name of our countryside home in St.  Antonio. It is an important place in (the subzone)  Canelli. Only 22 of the 52 townships can carry the denomination Moscato DOCG and we are located in one of them.”

The history of Coppo and Moncalvina extends well into antiquity.  “The estate was founded by my great-grandfather in 1892. We have remained true to his search for a wine with balance and freshness and just the right acidity. Mint and herbal notes are characteristic of that side of Canelli. That makes it a more serious wine, intended for food.”

La Cadrina from Romano Dogliotti ($10.99) was next. “My father was one of the first of the small growers to bottle his own wine,” said Marco Dogliotti. “Our wine is really in demand, especially during the Holidays. The secret is to stop the fermentation at just the right time and maintain very cool temperatures to maintain the freshness. The wine develops a floral profile, with flavors of ripe peach.”

Gaining the coveted DOCG denomination is no mean feat. “The wine goes before a panel of experts before it can receive DOCG.”

Stefano Chiarlo of Michele Chiarlo suggested we savor in concert his marvelous sweet wine Nivole. At $19.99 the half bottle, it was the priciest of all of the day’s offerings. It certainly outweighed its price point in flavor and value. “I consider this the ‘sorbet’ of wines,” Stefano beamed. “It is difficult to produce a wine like this that has just the right balance of flavor and texture.

The great and legendary Michael Broadbent, Director of Christie’s in London and Master of Wine’s President, declared Michele Chiarlo “the Best dessert wine in the world. Nivole is constantly the best.”

After the grapes are harvested by hand, the grapes are softly whole-pressed and fermented at controlled temperature to achieve an alcohol content of 5%. A part of the natural carbon dioxide that is developed is ‘entrapped,’ giving the wine a delicate effervescence. A process of micro-filtration gives the wine clarity and purity, evident in its brilliant straw yellow color and delicate floral aromas. Creamy and fragrant with a refreshing finish, this is one to savor after a satisfying meal.

Giacomo Pondini-Director of Consorzio d’Asti described the next participant, Marenco Scrapona ($20.99) as ”the cherry on the cake,” both for the quality of the wine and its location in a World Heritage Site. Winemaker Andrea Costa spoke of “the beauty of the hills” and the commitment of the winery to “protect the connection between the territory and man in
Piemonte.”

Marenco Scrapona is blended from Moscato grapes that are selected through a traditional technique that has been used for decades. It is an aromatic wine, with the perfume of the Moscato grape and a mouth nurturing blend of ripe fruit flavors including white peaches, a touch of tangerine and Asian pear with notes of brioche toast and a hint of mint.

Marenco Scrapona is equally at home with a Spicy Tuna Roll, a zippy seafood gumbo or a frothy, creamy Zabaglione. A rarity among white wines, it is capable of aging for up to two years revealing even more of its kaleidoscopic complexity. 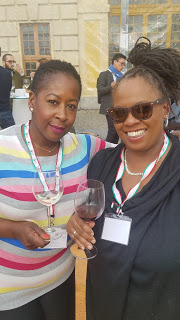 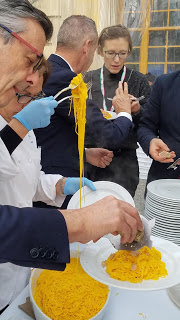 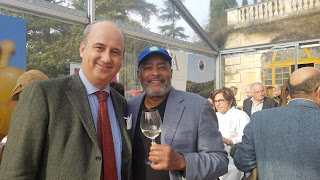 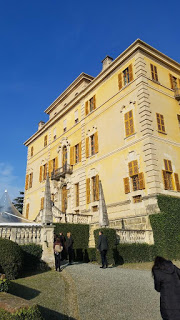 The Gancia Castle at Canelli

“The Moscato grape plays an important role in the UNESCO story,” Andrea Costa explained.  “There’s so much history in wine and Marenco Scrapona wine is a big part of it.”

Costa also had a surprise for the gathering. “You are the first to see our new label. The wine inside is still the same, but the label has changed.”

In charting the preeminence of the Moscato grape, Costa referenced the work of legendary winemaker Carlo Gancia in Turin, considered the father of Italian sparkling wine. “Carlo Gancia turned the wine world on its head in 1865, when he took all of that study he did in Champagne and after 15 years of trials and error, he began the production of the first commercial sparkling wine on a large scale.” Premium Asti DOCG is still produced using the same method today.

The Ceretto brothers founded the winery in 1976 in the actual birthplace of their father, Riccardo. With the passing of Giancarlo Scavino in 1995, his sons Gianpiero and Andrea took the reigns.

Careful and painstaking pruning, bunch thinning and sorting, all done by hand, during the harvest, are the cornerstones of the work in the vineyard. Further decanting, fining and filtration are done at the minimum to enhance the aromatic quality of the wine.

The image of the wine, with the designer label and bottle by one of Italy’s most celebrated designers, Giacomo Bersanetti, created in 1987, further sets this wine in a class by itself.

“One grape. Five wines. Five producers. Yet, each wine is singular and poignant,” moderator Jeffrey Porter concluded. It was a fittingly evocative statement that perfectly defined the sentiment of the afternoon. For more information on Moscato d’Asti, visit astidocg.it.

Posted by Dwight the Connoisseur at 11:37 PM