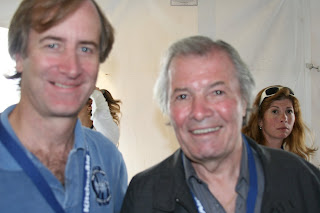 “My father has champagne every morning, because he finds orange juice boring!” That revelation from Bartholomew Broadbent, head of Broadbent Selections and son of Michael Broadbent, founder of Christie’s Wine Auctions in London, brought a gasp from the packed house of participants in the first session of Reserve Wine Tastings at the Aspen Wine Classic.It was nine a.m. and facing each of us, bleary-eyed from a night of hospitality suite hopping the night before, was a daunting row of rare champagnes from the house of Veuve Clicquot, Reims, France. Seated at Broadbent’s left was Samantha Barnes , U.S Business Director, Veuve Clicquot at Louis Vuitton Moet Hennessy.“Madame Clicquot was widowed and a rarity at the time, a woman running a business in France in the 1800’s. She innovated champagne as we know it today,” Barnes said. “She invented riddling to make champagne clear. Prior to that, it was cloudy. The original riddling table was her kitchen table. She cut slanted holes in the legs in order to test the riddling process,”­­­­­­We tasted through ten vintages, including Veuve Clicquot NV Yellow Label, Vintage Rose 2002, Vintage Rose 1985, among others. The stars of the morning were Veuve Clicquot Rare Vintage 1988, Vintage Rose 1978, La Grande Dame 1998 and La Grande Dame 1990. A surprise addition was 1983 aged Non Vintage Yellow Label which Bartholomew brought from his private cellars. “That means the grapes would have been vinified in the ‘70s!”“Unlike most non-vintage champagne, Barnes emphasized, Veuve Clicquot is aged 3 years in our cellars and 18 months more in the bottle. Vueve Clicquot is proof positive that you can ‘have your cake and eat it too.’ Its rich and creamy with a length of finish. It also has good apple and great orange notes!”The NV Rose and Vintage Rose 2002 were revelations. “2002 was Five Star vintage, Broadbent declared. “There’s been a real renaissance in sparkling rose of late. It has a layer of structure that’s almost dry and tannic. There’s also a real lengthening on the finish. This is truly a champagne that can go with anything in terms of food.”Samantha Barnes chimed in with a brief history of rose champagne. “Vueve Clicquot was the first house, in 1775, to make Rose Champagne. It is the sister of Yellow Label and comes from the same basic blend with a little red wine added at the end.”Bartholomew Broadbent added the final grace note, saying “It’s wide, juicy and vibrant. It certainly makes a sensible morning drink!” As the old saying goes, ‘The apple does not fall far from the tree.’
Posted by Dwight the Connoisseur at 10:58 AM