A timeless Classic in Aspen 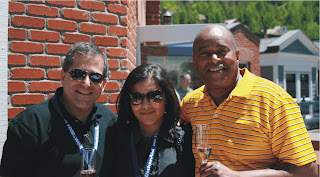 A Timeless Classic In Aspen
I flew into beautiful Aspen on a gloriously sunny day. The snow capped peaks and lush green of the Rockies below were spread out before me in bas relief like a Robert Wood landscape.
Cole, my affable driver from Lincolnshire, Illinois (looks just like Aspen! he joked) whisked the courtesy van to my two bedroom luxury condo at The Gant, a stunning resort snuggled into the base of Aspen mountain. Settling in, I had Cole light a crackling fire and cracked open a bottle of the Jacob's Creek Chardonnay from last week's trip to the Barossa that I'd brought along for the ride. Sitting on the balcony in the advancing afternoon sun, I watched as tennis players half-heartedly lobbed shots across the net under the watchful presence of Aspen mountain. As I sipped the lemony, silky Chardonnay, I watched as the gondolas inched their way to the top of the mountain. In less than 24 hours, more than 6,000 foodies and wine enthusiasts from across the country and around the globe would descend upon this quiet, mountain retreat, a number nearly equal to the entire population of Aspen, for the 27th Annual Aspen Wine Classic sponsored by Food & Wine Magazine and American Express.

Arriving at Aspen's puddle jump of an airport, I was fortunate to hook up with John Terlato Vice Chairman of Terlato Wine Group and Terlato Wines International of Lake Bluff, Illinois, north of Chicago, one of the presenters at the Grand Tasting tents of the Classic. He will also be hosting a pair of hospitality events at The Grand Hyatt for industry leaders and the media, pairing dishes prepared by Terlato Wines Executive Chef Colin Crowley with a portfolio presentation of Champagne Bollinger on Friday and Santa Margherita wines on Saturday.

"My father started doing this kind of thing 25 years ago, " Terlato confided in me as we waited by the baggage carousel. "He's always had a strong belief that the only way to truly present the wines was in a setting where the consumer would have an 'aha!' moment. The best way to experience our wines is with food. So often we're asked to host wine dinners with the restaurants that carry our wines. Invariably, the best chefs are open to collaborating with us to come up with the best combinations of flavors and cuisine to showcase the wines. It's interesting, for example, to have a single Pinot Noir paired with four very different preparations of salmon. You might cover one with a sharp-tasting mustard sauce, another with a soy sesame glaze, still another with a drizzle of balsamic. Conversely, its also a challenge to see how four very different pinots will stand up against a single preparation of a delicately flavored dish. The combinations are endless, but the goal is always the same. Wine belongs with food and its our mission at Terlato wines to make consumers aware of the many splendid options that are out there."

Later in the day, I spoke with Bartholomew Broadbent, son of Michael Broadbent, the founder of the rare wine collection at London's famed auction house, Christie's. I made friends with the senior Broadbent when he presided over the Napa Valley Wine Auction some years ago and was even hosted by him in London for a fabulous session of afternoon tea at his private club in St. James.
I crossed paths with Bartholomew at an exclusive tasting of his portfolio of vintage Ports at Chicago's Ritz Carlton last Spring and promised to catch up with him for a more lengthy interview at the first opportunity. Here we are together in Aspen. We've scheduled to meet at The Little Nell for cocktails after his Reserve Wine Tastings, one of the featured events at the Classic. I'll be attending the early morning tastings, Four Decades of Veuve Clicquot Champagnes and later, Greatness Continued: Remoissenet Clos Vougeot Since 1952, which are sold out. If there's time, Michael promised to sneak me into the tasting of Masi's Historical Amarone Campolongo di Torbe and Mazzano. What a nightcap! I'm scheduled to attend the Aspen Jazz Festival with Smokey Robinson celebrating 50 Years of Motown later that evening. With such rare and heady libations swirling in my head, I may not need Smokey's silky sounds to dance far into the night!
Posted by Dwight the Connoisseur at 11:14 AM