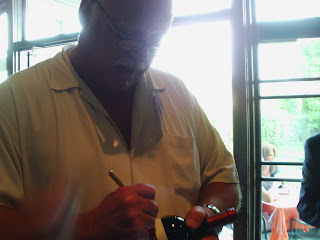 Michael Martini is the upholder of a unique legacy. “My family is part of a proud tradition of Italian Americans that saved the City of San Francisco during the Great Earthquake of 1906,” he said during an Evening with Michael Martini of Louis M. Martini Winery in the beautiful private dining rooms and gardens of Carlucci Restaurant in Downers Grove. “That was the year my grandfather began making wine in the Napa Valley. When the fires began to rage after the earthquake, the families that lived in Little Italy near Fisherman’s Wharf covered their homes with mattresses and soaked them with the wine they had in their cellars. That saved Little Italy. That’s not a myth,” he said emphatically. “That’s a true story.”

Thus began an enduring legacy. “Louis M. Martini is the oldest continually operating family winery in the Napa Valley. I’ve been the winemaker there for 32 years; my father was the winemaker for 33 years before that. My grandfather kept making wine right through Prohibition, supplying it to the Catholic churches.”

Standing in the outdoor terraces of the restaurant, with an ornate Roman fountain gushing its celebratory waters, Martini held court for a crowd of 50 wine enthusiasts who had arrived to sample seven of his latest vintages, including 2006 Louis M. Martini Napa Valley Chardonnay, 2006 Alexander Valley Cabernet, 2006 Gnarly Vines Zinfandel, Monte Rosso and the star of the evening, Lot 1 Cabernet Sauvignon, a single vineyard, 100 per cent Cabernet offering. While signing a label with a flourish for one collector who had purchased a bottle, Martini talked about what it was like to grow up as part of a winemaking dynasty in the nation’s most storied winegrowing region.

“I didn’t think of it that way growing up,” he said, while sipping a glass of Lot 1 in the garden terrace.” When I wasn’t in school, I was always working at the winery, doing everything from harvesting the grapes to tending to the wine in the cellars.”

After graduating from the world-renowned winemaking program at U.C. Davis, Mike worked alongside his father before taking over as winemaker in 1977.

“We’ve become known over the years for our unique treatment of Cabernet Sauvignon. We’ve recently received another superior rating from Robert Parker and have been invited back, once gain, to the Wine Spectator’s Wine Experience in New York. You have to score 90 and above in order to get invited to participate, and we’ve been asked to come back year after year.”

Carlucci restaurant set out a dazzling array of Italian American specialties to accompany the superb wines, including their signature Crispy fried Calamari, Traditional Italian Sausage and Sweet Peppers over Soft Polenta and an assortment of thin crust pizzas, done in the restaurant’s rustic wood-burning brick ovens.

“We pride ourselves on our focus on Cabernet,” he said. “Everyone talks about massive Cabernets, but what we’ve been able to do is show how this wonderful grape can express that power with elegance, grace and finesse.”

Mike honed his winemaking skills further by studying winemaking techniques first-hand in Bordeaux and Burgundy, He’s been applying what he learned in the micro-winery he had built just outside his office in St. Helena, in the heart of the Napa Valley. “We’ve got some great wines coming from those small plots. Lot 1, which we’re pouring tonight, is the culmination of a blending from five different plots. You can taste the full expression of the Cabernet grape in the blend, from a strong, almost ‘old vines’ characteristic on the palette to an herbaceous quality from some of the newer vines on the nose.” A tradition lives.

Posted by Dwight the Connoisseur at 10:32 PM