The (Olive) Hills are alive, with the sound of the Doobies! 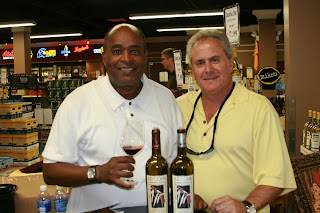 “Our 2006 Silver Label Cabernet is aged in French Oak for one year,” Bruce Cohn, owner of Sonoma County’s B. R. Cohn Winery of Glenn Ellen, California said proudly. “ And the wine sells for only $17.99. You won’t find too many winemakers who make cabernet at that price who use French Oak!”

Cohn was pouring his 2006 Silver Label Cab and the more expensive 2006 Sonoma Valley Olive Hill Estate Vineyards Cabernet Sauvignon to a small, but enthusiastic gathering of wine aficionados at Binny’s South Loop location in Chicago. The informal tasting was part of his national tour to introduce consumers to the label that has become a staple in many fine restaurants.

“All of the great steak houses have my wine,” he said while posing for a photographer. “Morton’s, Gibson’s, The Palm. Jerry Kleiner loves my wines and has them in all of his restaurants, including Carnivale, Gioco and Via Ventuno, the old Room 21.

What makes my wines unique is that I’m trying to show that Cabernet can be well balanced and drinkable now as well as something that can age gracefully for years to come. So many wines are either or. They may have great aging potential, but they’re nothing you can bring to the table now. My winemaker, Tom Montgomery, is a master as crafting wines that are drinkable now, but have that aging potential.”

Tom Montgomery brings curriculum vitae to his current position as winemaker to B.R. Cohn that would be the envy of anyone in the wine business. Having grown up in the rich agricultural basin of central California, he earned his degree in enology from Cal State University. He then spent five years in the Napa Valley where he worked for the original Napa Cellars. He then moved to San Luis Obispo where he served in the dual roles of winemaker and vineyard manager. He then returned to Napa, first to Cosentino winery and then, in 1997, to Conn Creek for six vintages, where he produced the landmark Bordeaux blend ‘Anthology’ which garnered numerous awards and critical acclaim. After earning his MBA, he came to B.R. Cohn with the goal of creating consistent high quality Cabernet Sauvignon. Just one taste of the magnificent Olive Hill Estate Cabernet brings to mind the words “Mission Accomplished!”

Bruce Cohn is no slouch in the wine background department either. He brings 35 years of wine country wisdom to his role as proprietor of the B.R. Cohn Winery, founded in 1984 in the heart of Sonoma Valley.

Cohn also possesses another asset that is unique among all winery owners, he has for years guided the ascendancy of one of the most successful popular music groups of all time, The Doobie Brothers. Cohn continues to fuel his passion for music through his work with the multi-platinum band. They’ve even made their way onto a B.R. Cohn wine label, the Doobie Red Series, with proceeds benefiting the National Veterans Foundation. In fact, The Doobie Brothers will be performing at the winery Saturday, October 3, on a bill with Pablo Cruise and Little Feat (am I getting a flashback to old Fillmore Street days in San Francisco?), with proceeds benefiting the Veterans Foundation and various children’s charities. On the evening prior to the Binny’s tasting, The Doobie Brothers headlined a concert at Ravinia Festival on Chicago’s lakefront in suburban Highland Park, one of many national appearances the group will make this year. For more information, visit www.brcohn.com.

Posted by Dwight the Connoisseur at 1:30 AM