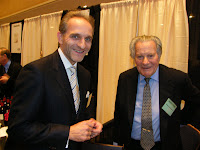 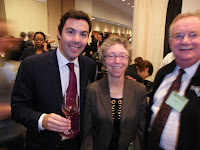 For a single night, Chicago was the heart of Bordeaux, France. The Chicago Wine Company introduced the 2007 Bordeaux Vintage in an exclusive event at the Ritz-Carlton Hotel, Chicago.

Over a glass of Champagne Duval-Leroy, Cuvee Paris, the Guests of Honors discussed the importance of this premiere event, which as been held in Chicago for the past 18 years, attracting Bordeaux lovers from throughout the Mid-West area.

“ Wine is Bordeaux. Bordeaux is Wine!” declared Anthony Barton, who at 80 years old describes himself as “theoretically retired, but still very involved with the company in one capacity or another.

“This is an annual event in which we present the most recent vintage that we’ve bottled. We’re encouraging people to not only buy the wine, but to drink it and enjoy it,” Barton continued. “So far its been shown that there’s still a demand for expensive wines. There are a number of people that if they put their money in wines that they love, its better than putting it in the bank. They figure its safer putting their money into wines that it is putting it in the bank. I don’t know another investment where, even if it goes down, you can drink and enjoy it!”

“While our focus is on the 2007, we also use this opportunity to showcase some of our older vintages,” according to Jean-Charles Cazes of Chateau Lynch Bages. “The 2000 vintage is considered one of the best vintages ever. That makes this event a real attraction for wine lovers. Also, we’re presenting the 1990 vintage, which is also considered one of the most outstanding from the Bordeaux. Last year, we were here in October, right at the beginning of the world economic crisis. We had a good turnout then and we have an even better turnout this year. There’s still a lot of interest in fine wine, in spite of the economy.”

Cazes’ assertion was borne out by the capacity crowd of diners who attended the event. The Wine Doctor spoke with one couple that has been coming to the event every year from St. Louis from its inception.

“This has been a long-term relationship for us,” said Devon Warner of The Chicago Wine Company. “The tickets to this event practically sell themselves because these are wines which have names that are known by everyone who is seriously into wines and in many ways, the names are legendary. Even in these economic times, the demand for these wines is still unabated.”

Chef Payne’s menu focused on the unique characteristics of Bordeaux wines, from its bright floral nose to its complex flavors with hints of berries and dried fruit and hints of tobacco and truffle on the finish. Rabbit Cassoulet with Pumpkin and Matsutake Mushrooms and the following course of Herb Marinated Rack of Lamb Chop with Yukon Gold and Black Truffle Shepherd’s Pie showcased the wines and their elegant character beautifully.

A key element that contributes to the unique flavor of Bordeaux wines is their complex character, which is almost unequaled in any other wine. “This unique character comes from the soil, or ‘terroir,’” declared Anthony Barton. “The Bordeaux has a complexity of soil types and minerality that is unlike anywhere else. That’s what makes the wines so distinct and so sought after.” One taste of his 2007 Chateau Montrose, St. Estephe, was all it took to prove the point. It was light and easy to drink with a well-balanced structure. It also had enough backbone that it lingered long on the palette for a long, smooth finish. These wines can be pricey, but for a special occasion, that perfect Holiday meal or a special gift to someone you know who appreciates the finer things of life, there’s nothing quite like the great wines of Bordeaux.

Posted by Dwight the Connoisseur at 1:15 PM