Passport to France-the Holidays are here! 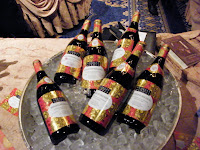 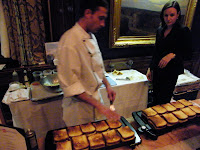 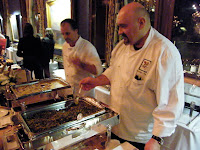 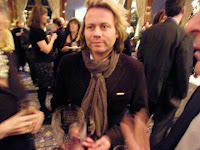 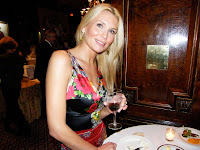 Francophiles entering the chandeliered Grand Salon of the elegant Union League Club were handed a souvenir glass and a dark brown ‘passport’ document, their official entry to the 25th Annual Passport to France. Each year, the French-American Chamber of Commerce celebrates the arrival of the 2009 harvest of Beaujolais Nouveau.

Sponsored by Deloitte, Veolia Environment, First American Bank, Fragomen and Schneider Electric the event is one of two annual fundraisers for the FACC-Chicago. Its an opportunity to showcase the bounty of the season for wine lovers and for Featured Restaurants to shine.

Wine selections included the star of the evening, 2009 George Duboeuf Beaujolais Nouveau, provided by W.J. Deutsch & Sons, Ltd. This year’s vintage is among the best in recent memory. The wine has a fuller expression of the grape varietal, with top notes of raspberries and a bit of spice on the nose. When paired with a number of the excellent and substantial dishes presented by the chefs, it held up surprisingly well and showed itself to be an excellent accompaniment to flavorful meats such as veal and short ribs of beef. Additional wine selections included a superb 2005 Chateau La Tonnelle provided by H2Vino. The ’05 was a superlative vintage year and this wine captured the essence of its greatness. With just a touch of oak to give it body and structure, it had a smooth, mellow, round feel in the mouth.

Chef Dominique Tougne stole the culinary show with his Blanquette of Veal Cheek and Wild Rice. The dish, flavored with a bit of cognac, melted in your mouth and had that homey, yummy mouth feel that the Japanese call umami. It creates a phenomenon where you keep on eating the dish even though you’re full to the gills. I’ll have to visit Bistro 110 to sample this one up close and personal Chef Dominque just gave a sly grin when asked to divulge the recipe!

Close behind were the Grilled Cheese sandwiches offered by Chef Martial Noguier of Café des Architectes. These were not your school cafeteria’s grilled cheese. Instead they were composed of Brie cheese on freshly made brioche bread with truffle butter and roasted hazelnuts. I had a least a half dozen slices of this sinful concoction and made my own version at home the next day. Hats off to Chef Noguier for an original spin on a timeworn classic.

The Union League Club of Chicago came through with a solid rendition of an old-reliable that has quickly become a holiday staple, Braised Short Ribs of Beef with Mashed Parsnips, Natural Jus and Crisp Onions. I snagged a glass of Bodega Monteviejo Festiva Malbec from Rougefort (Vignobles Pere-Verge
) and Bob Bofman Selections. The hefty Malbec was the perfect partner to tackle the flavorful short ribs. He finished things off with arguably the best hand-made chocolates on earth from Visages Haut-Chocolate. I was delighted to see my old friend Nikolina, who I remembered from the store’s original location on Armitage in Lincoln Park near the DePaul campus. “We‘re still there,” she told me in her lilting voice. There’s also now a location on the Magnificent Mile. As Michael Jackson would have said, “I’ll Be There!”

A final glass of 2007 Helfrich Riesling from Underdog Wine Merchants, one of my old standbys when I was a young club-hopper living at Sandburg Village in the go-go ‘70s and I was out into the night and an evening concert of Brahms at the CSO. A little German wine, a little German night music. Not exactly French, but Wundebar non-the-less!

Posted by Dwight the Connoisseur at 5:03 PM