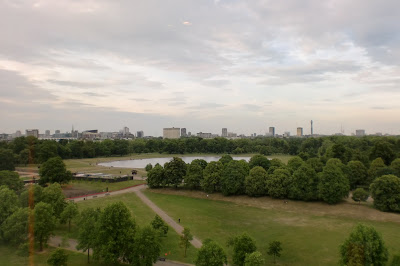 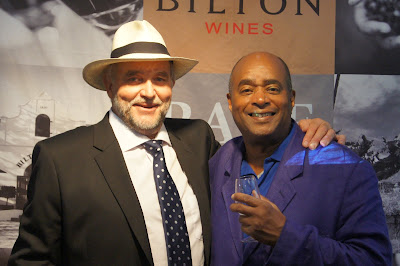 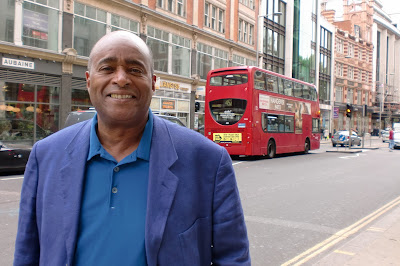 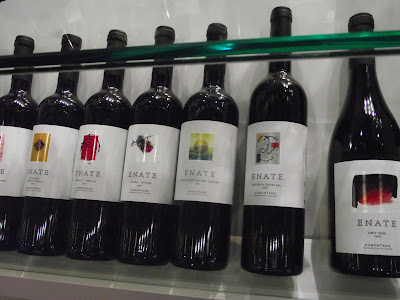 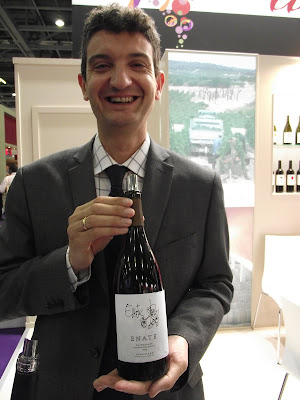 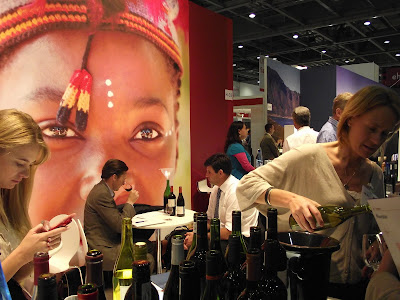 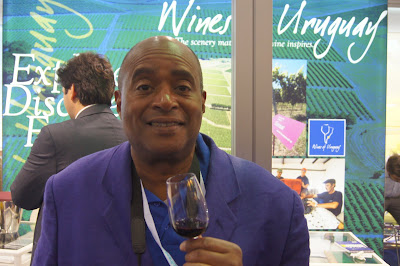 1. Sunset over Kensington Gardens from the rooftop restaurant Min Jiang at the Royal Garden Hotel, London

4. Original art graces the labels of ENATE wines of Spain

5. Export Area Manager Tomas Arribas shows off an ENATE label selected for display in an exhibit at the San Francisco Museum of Modern Art

7. At the Uruguay tasting pavilion

London, England--London is in full bloom as the sight and smell of Daphnes, Magnolia and Camellia fills the air in this misty and magical city.

The 31st London International Wine Fair kicked off at Excel London convention center with a dizzying round of tasting events and more than 20,000 wines and spirits being poured for industry professionals, including importers, merchants, producers, agents, restaurateurs, wholesalers, sommeliers and wine journalists. Some 100,000 people are expected to make their way among the breathtaking array of tasting booths and to attend focused tastings and seminars.

Preceding the fair was the announcement of the winners of the International Wine Competition. France came in first, with 1,932 medals. Australia took second place with just over a thousand and France garnered 979 medals to come in third.

"There is significant commercial advantage for wines bearing the IWC logo and medal recognition," event director Chris Ashton said in a statement issued as results were announced yesterday.

"The competition generates considerable global media coverage for all IWC award-winners, and this in turn increases sales by strengthening a wine's credibility with consumers."

Innovation is the key as winemakers experiment with new varietals and make key changes in the profile of their existing portfolio to capture market share in the tectonic slip and slide of today’s ever-fluid market. Younger, inexperienced wine drinkers and women are target markets as producers offer lighter, more fruit forward and food friendly wines that are both easy to drink and easier on the pocketbook.

Fusion of wine and art is the calling card of ENATE wines of Spain. “If you look at our labels, each one is an original work of art. The owner is an avid art collector and we wanted to someone represent that in the wine,” said Export Area Manager Tomas Arribas. “One of our wine labels has been selected as part of an exhibit on the relationship of wine to art by the San Francisco Museum of Modern Art,” he said with pride.

Mark Bilton, of Bilton Wines, Stellenbosch, South Africa, in his characteristic jaunty Panama, greeted me with a warm handshake and a glass of his distinctive 2006 Gold medal winning Cabernet Sauvignon ($20). The elegant, stylish wine is redolent with flavors of cinnamon and cloves. This is a masculine wine with complex layers of fruit, balanced with touches of black olives and truffles. A grilled steak or hearty beef bourguignon are the recommended mains, but it’s versatile enough to pair with a variety of mildly spicy exotic cuisine. The outstanding balance and style of this wine has re-defined perceptions of quality among South African wines.

Wines of France, Spain, Italy, Argentina and Chile occupied prime spots on the floor of the Excel, with new players, such as Lebanon, Croatia and Russia, vying for attention. These “newcomers” actually bring with them a history of winemaking that practically goes back to the dawn of civilization. While their wines are consumed with relish within their own borders and are known to a handful of intrepid world travelers, this is their first time presenting on the world stage. Their presence makes for an intriguing and interesting London International Wine Fair. Cheers!

Posted by Dwight the Connoisseur at 2:14 AM