VERONA, ITALY—Matteo Bruno Lunelli’s enthusiasm is uncontainable. He has recently been named Chairman of Cantine Ferrari, one of the most storied names in Italian sparkling wine. In his upper floor, temporary private office and tasting room in the Ferrari Pavilion in the massive Veronafiere convention complex at Vinitaly 2012, he shared his vision for the company, while also sharing tastes of his superior Trentodoc Metodo Classico Wines in celebration of the 110th anniversary of the Winery while presiding over a special luncheon of specialties prepared by their Michelin-starred chef, Alfio Ghezzi of Locanda Margon.

Prior to the luncheon, Matteo Lunelli made a major address to the media at the OperaWine news conference, a gathering of Italy’s top 100 winemakers held in conjunction with Wine Spectator Magazine. OperaWine was the premiere event of  Vinitaly,  the world’s largest gathering of wine producers, distributors and industry professionals with its more than 4,000 exhibitors and 150,000 participants from 94 countries. In his statements at OperaWine and during this personal luncheon and interview at his pavilion, Lunelli showed that he is fully aware of his newly gained stature at the helm of one of the most revered names among European sparkling wines.

The words Champagne and Italian and not words that you would normally associate. In fact, by law, it is not possible, but that is precisely where the roots of Ferrari sparkling wines are germinated. At the dawn of the last century, it was Giulio Ferrari’s vision to create an Italian wine that could compete with the best French Champagne.

“He went to France, to the famous School of Viticulture in Montpellier to learn how to make Champagne,” Lunelli tells the story, while an assistant pours 2001 Giulio Ferrari Riserva del Fondatore , Trentino, Italy ($100).
“In 1902, there were only 400 bottles produced after he smuggled  Chardonnay grapes back to his native Trentino.”

Ferrari’s sparkling wines gained a small, but loyal following. It was in 1952, that the destiny of Ferrari changed when he sold the winery to Bruno Lunelli, who owned the most famous bar in the city of Trentino. “ He and my great grandfather were great friends. Giulio Ferrari continued to work at the winery until his death and in the present day, his sons Gino, Franco and Mauro continued to work at the winery.”

Matteo is the third generation of the Lunelli family to run the winery. With his appointment as Chairman at 38 years of age, this marks the affirmation of  the winery’s continued primacy in the industry.

Many years ago, a wine critic described Ferrari spumante as the “Rolls Royce of Italian sparkling wines. “  Crafted only from Pinot Noir and Chardonnay grapes that are grown on restricted soils, the wines are “champagne” in all but its name and place of origin.

“This comes from the founder, Giulio Ferrari, who started a small production with an obsession for quality,” Matteo explained. “In that day, he was a pioneer. Nowadays, everyone speaks about quality of wine, but Giulio Ferrari did it in 1942. In fact, he started at the beginning of the 20th century, when wine was sold as bulk wine. Then, it was considered more of a food than a pleasure.

“ He also had a strong knowledge of viticulture. He maintained a vineyard just for nursing vines. There’s a nice anecdote about the fact that Giulio Ferrari sold some Cabernet Sauvignon vines to the founder of Marchesi Antinori to use for their Tignanello (2008 Antinori Tignanello-$79.99).

“So, at the heart of our company is a culture for the quality of our products. We control the production of our wine from the soil to the table. We don’t buy our wine grapes from just anyone. We cultivate our grapes at our own estate and when we do buy grapes, we buy them from providers that we know and whom we constantly monitor.”

Lunelli maintains that because of this link to the small growers in the region, “there’s a strong bond between Ferarri and  the people of Trentino.”

Ferrari remains, essentially, a family operation. With the baton of chairmanship officially passed from patriarch Gino Lunelli, to his nephew Matteo, a legacy continues. Cousins Marcello, the oenologist, is head of production and vice-chairman. Camilla Lunelli is in charge of communications and external relations, while Alesandro heads the technical area and planning and has become a member of the board of directors of Ferrari and of the other companies in the group. While Gruppo Lunelli has been opened to external contributions at the highest level, the company maintains the features of a family-run firm, with regard to ownership and governance. 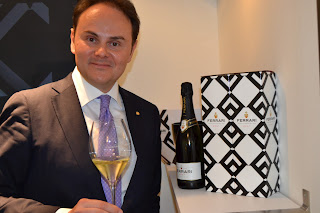 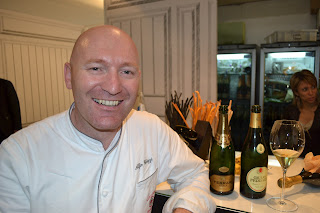 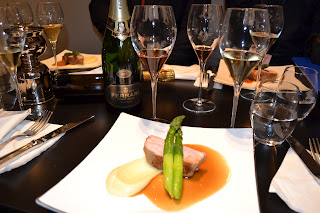 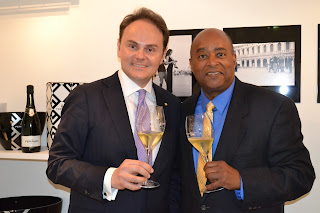 The stories of Ferrari sparkling wines and the Ferrari and Lunelli family legacies are only the beginning. There is a vision for the future that is evident in the dazzling array of Ferrari wines, both sparkling and still, that were unveiled in a private media tasting at the Ferrari Pavilion within the Trentino Hall at Vinitaly 2012.  More in Part Two.