The wine known as "the liquid of the gods" is steeped in history, myth and the land

Pantelleria, Sicily--The flight into Pantelleria's mountaintop airport was urged on by the powerful winds that give this tiny island just north of Tunisia on the North African coast, its name. Upon check-in at the gate at Rome airport, the boarding agent breathlessly announced that the day's single flight to this island paradise would be departing as scheduled, a tentative proposition owing to frequent cancellations caused by the island's windy conditions.


The view was breathtaking as the plane, which doubles as a mail plane for the local postal service, made its forceful landing on the airport's single landing strip. The most striking visual element; the lack of sandy beaches on the coastline ringed with aqua-marine waters that sparkle as if sprinkled with diamonds. The coastline's outcroppings of black rock and boulders look more like the surface of the moon than the topography of a tropical island.

Pantellaria is steeped in myth and ancient history. The Greeks settled here, as did the Spanish, the Romans, the Turks and the Byzantines. The Greeks set many of their myths in the swind-swept setting of Pantelleria. It is here that Odysseus faced some of his greatest obstacles and where, according to legend, the goddess Tanit won Apollo's love by offering him a glass of Passito, the local wine. In later years, the legendary lover, Giacomo Casanova lured his romantic prey into his Venetian lair by offering them a glass of the intensely sweet potion.

In spite of the many footprints that have trod these rocky slopes, it is that of the Arabs, that has made the most lasting  imprint. Their influence can be seen everywhere, from the names of local towns, Mueggen, Gadir, Bukkuram and Khamma, home to Donnafugata winery the subject of the day's visit to the local cuisine, underscored with its use of couscous and aromatic and savory spices. The journey over narrow winding roads led to the town of Khamma, home to Donnafugata winery,  to observe the Zibbibo grape harvest and the drying process known as "Passito," from which the name of the local wine is derived. The Arab influence is  seen everywhere, but most strikingly in a subsequent architectural tour of the island's many stone buildings, known as "dommus"  built by Arab and Byzantine architects and artisans.

Unlike Sarah Palin's bogus claims of being able to "see Alaska from my kitchen window (sic)." you really can see Tunisia and the coast of North Africa from Pantelleria. The continent is only 37 miles away and is entirely visible on a clear day.

It follows that the wine industry in Pantelleria is firmly rooted in the cultural history of North Africa. The Zibbibo grape, from which it's famous Passito wine is made, was the favored grape of Egypt and was said to have been brought here by the ancient Phoenicians. The grape is uniquely suited to thrive in the island's volcanic soil and high winds; shielding itself by growing close to the ground, nearly burrowing itself into the sandy clay soil. This ancient grape, also known as Muscat of Alexandria (Muscat d'Alexandrie) is one of the oldest genetically unmodified vines still in existence.

The grapes are all hand harvesed. It's back-breaking work, with workers carefully examining each bunch and discarding the spoiled fruit and meticulously removing the stems  by hand. Winds whipping across the vineyards, stirring up mouthfuls of dust, (of which I swallowed more than my fair share) make the work that much more arduous.

Donnafugata winery has been making Passito since its inception. It's award-winning wine is called Ben Rye (pronounced ben ree-ay). The name means "born of the wind."

The wine is produced using a centuries-old process, involving drying the grapes on mats in a long shed in the open air and under the hot sun to create a wine that is concentrated with intense flavors and aromas and a high level of sugar. Even though Donnafugata is a thoroughly modern facility in every way, the method in which it makes its Ben Rye is derived from its pre-industrial past.

Standing amidst 120 year old vines, winemaker and technical director Antonio Rallo describes the labor-intensive process. "We're trying to create a flavor and aroma that is completely different from that of fresh grapes. We're not trying to preserve aromas of the fresh grape, but to find new aromas from the dried grape. We get this completely new flavor and aroma from the sun and the wind that is unique to this place."

Walking through the football-field lengths of drying sheds, one can see the grapes at various stages of the passito process, from fresh, plump, fleshy grapes, to dried fruit that almost look like raisins. But, instead of having a tart, mouth-puckering flavor, these dried grapes are ultra-sweet.

Later that evening, after swallowing a mouthful of dust and developing several charley horses on the back of my calves from the day's strenuous trek through the vineyards, it was time to celebrate back at the winery "Big House" in Khamma. Passito wine flowed like water as tray up tray of the island's prized "Gambero Rosso," the Ruby-red shrimp that feed on the island's coral reefs, were served. A sideboard of local cheeses and platters of olives and the popular dish, caponata, featuring the island's native capers begged further inspection. Meanwhile,  mounds of sugary sweet pastries, with their mouth crunchy layers of flaky, delicate layered pastry and marzipan covered cakes, jokingly called "the virgin's breast," were quaffed down with the heavenly golden Passito wine. This was truly a Feast for the Gods in a place they call "The Land of Liquid Prayers." 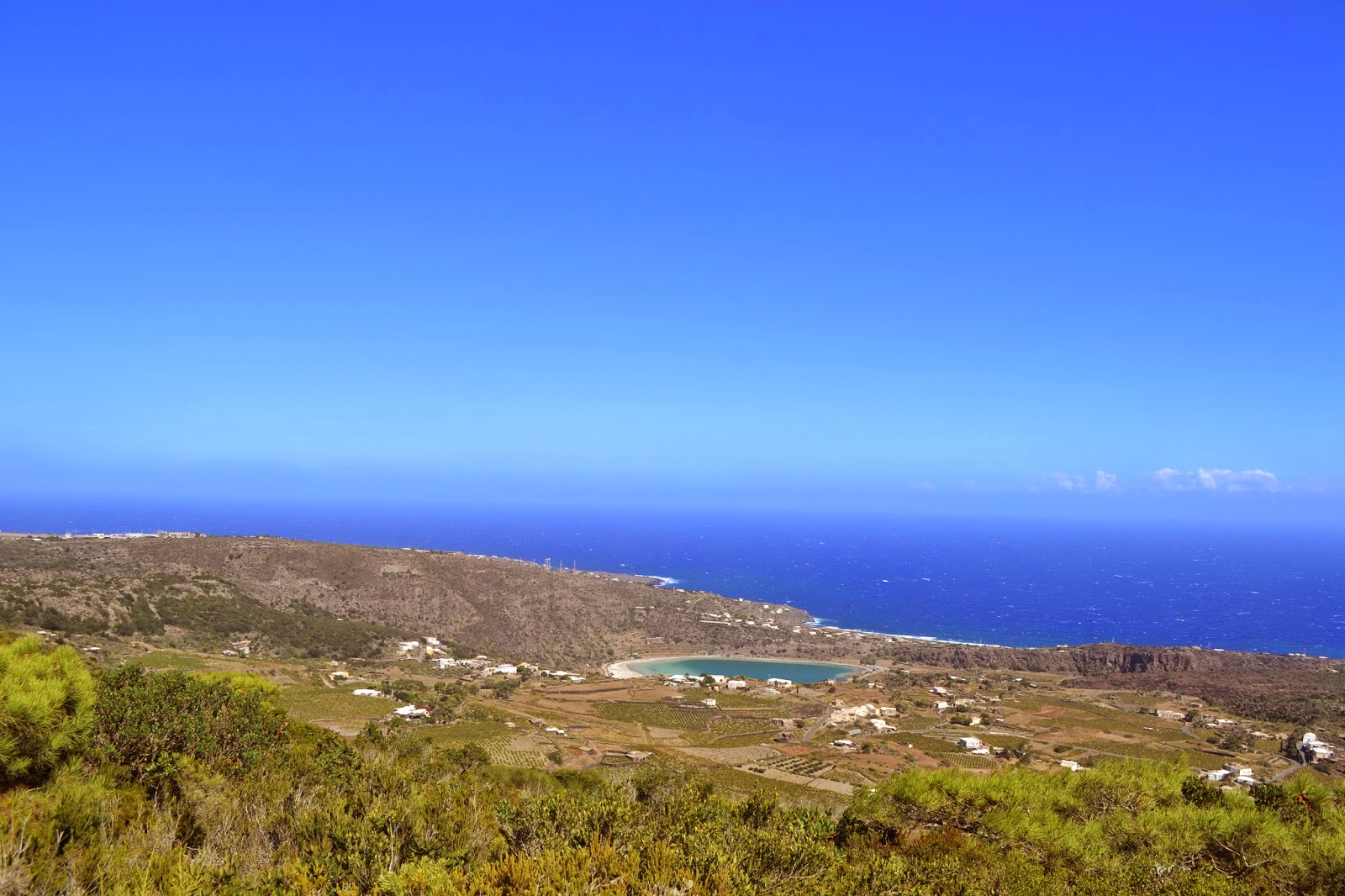 The windswept coastline and azure Mediterranean Sea of Pantelleria 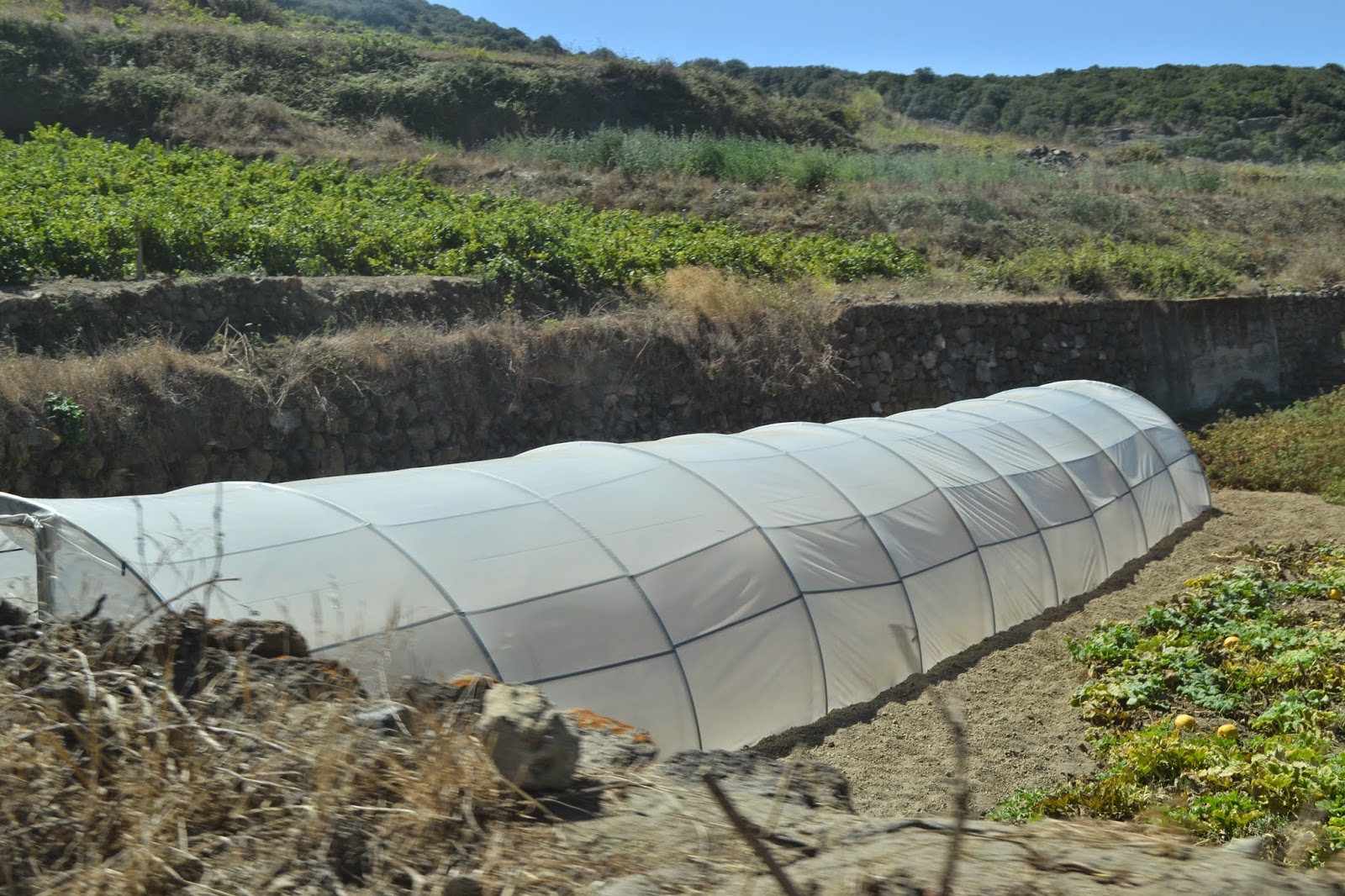 The golden hue of Passito wines 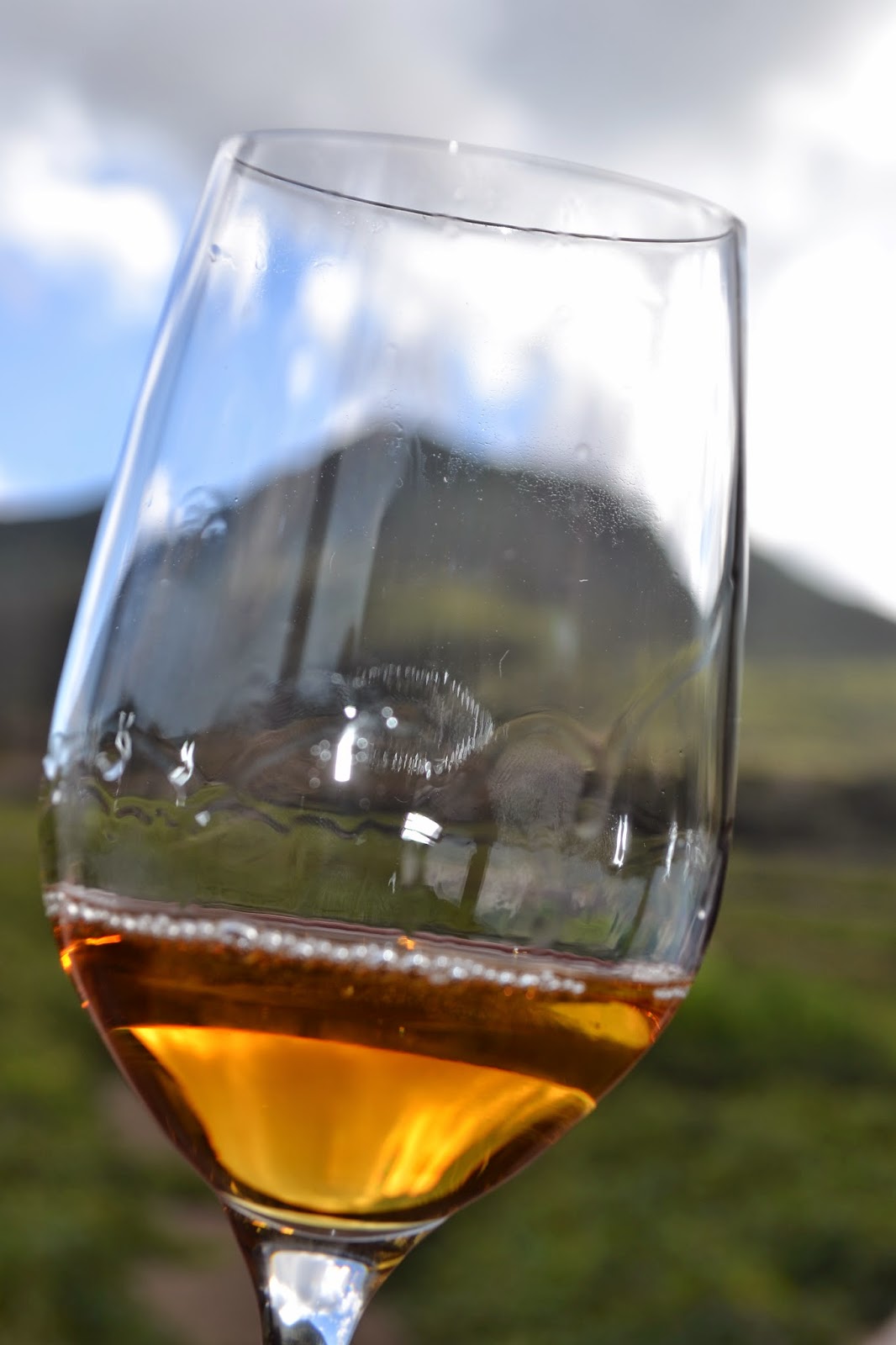 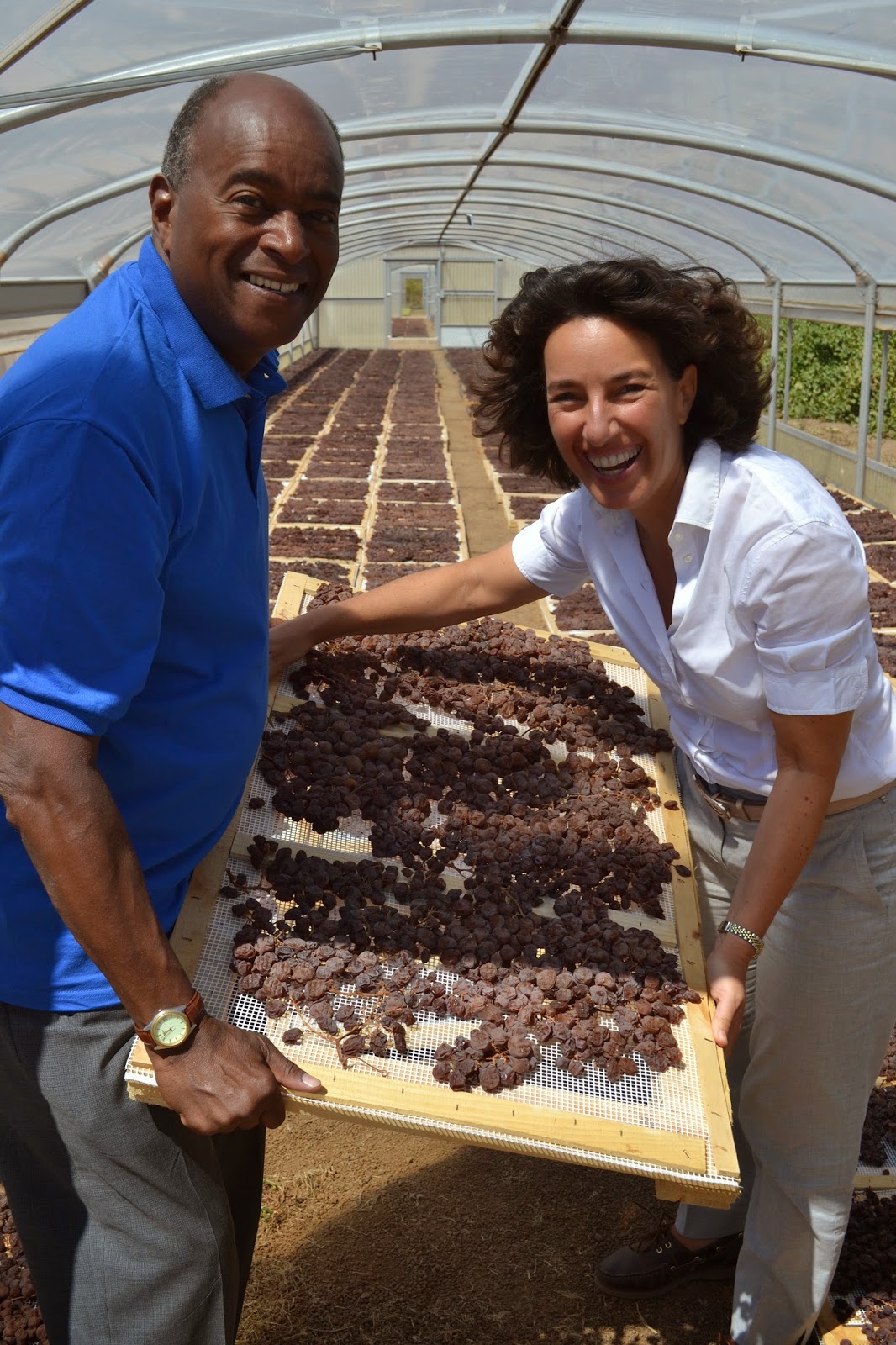 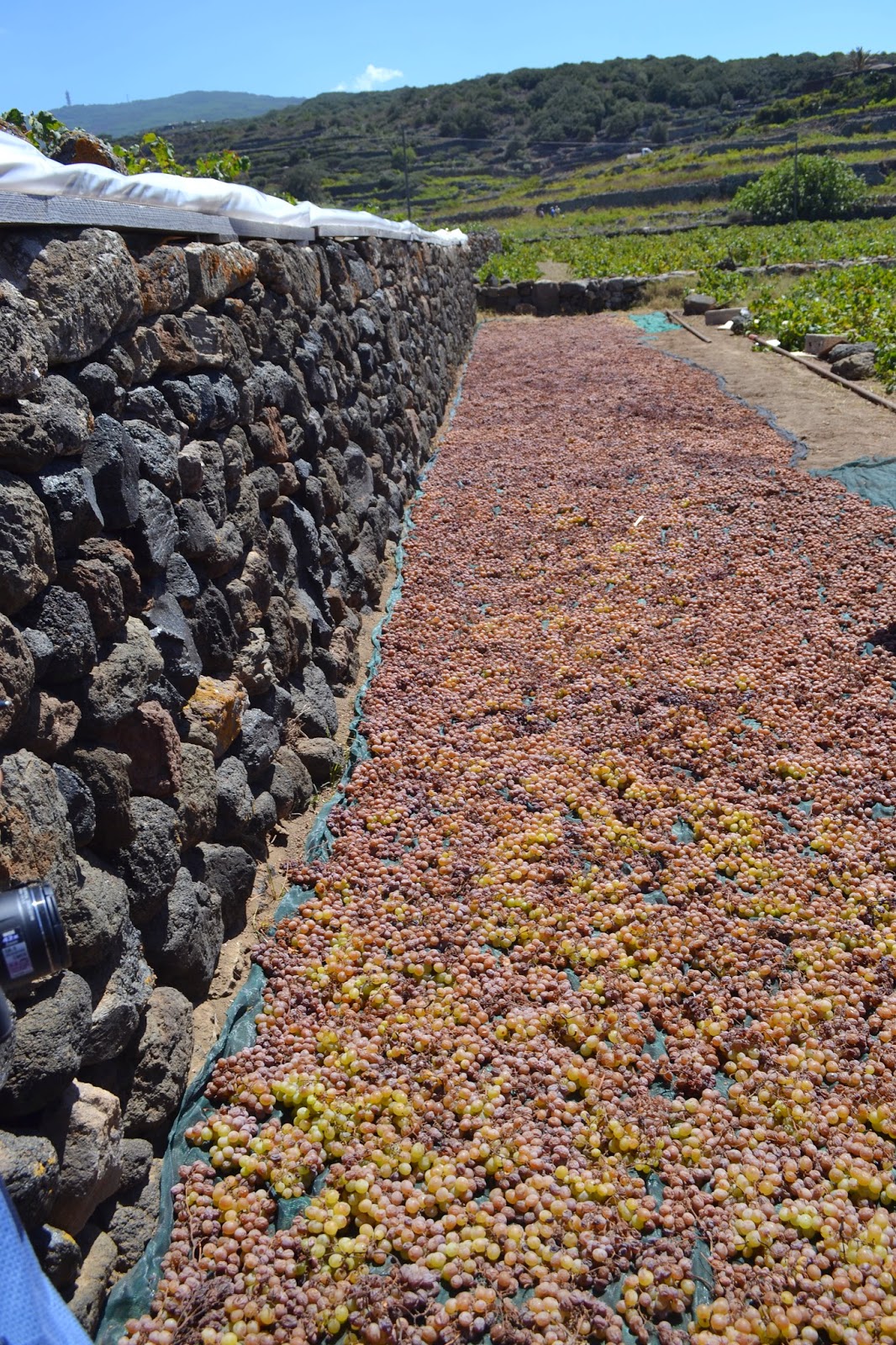 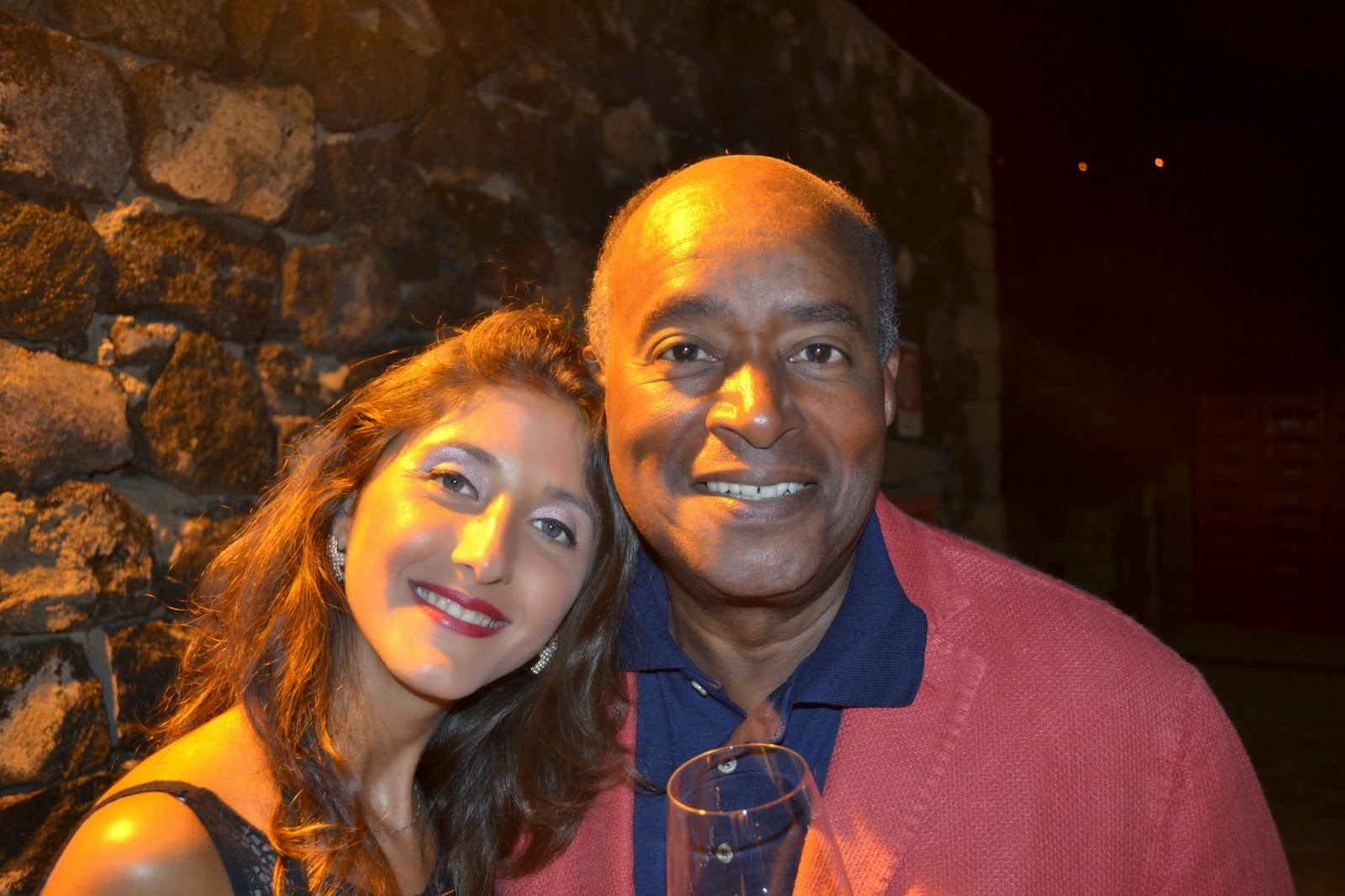 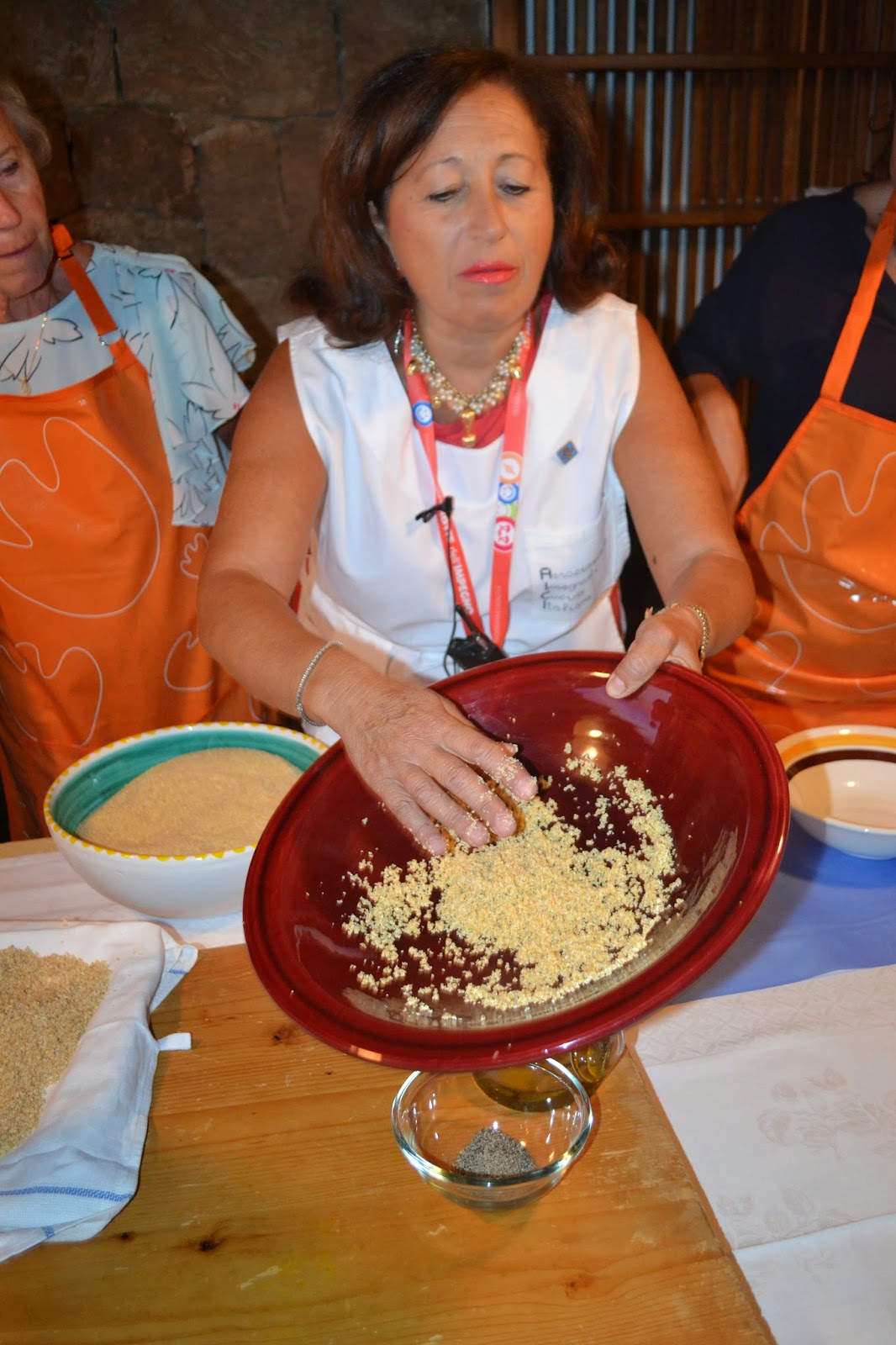 Native couscous is prepared in the traditional manner by hand 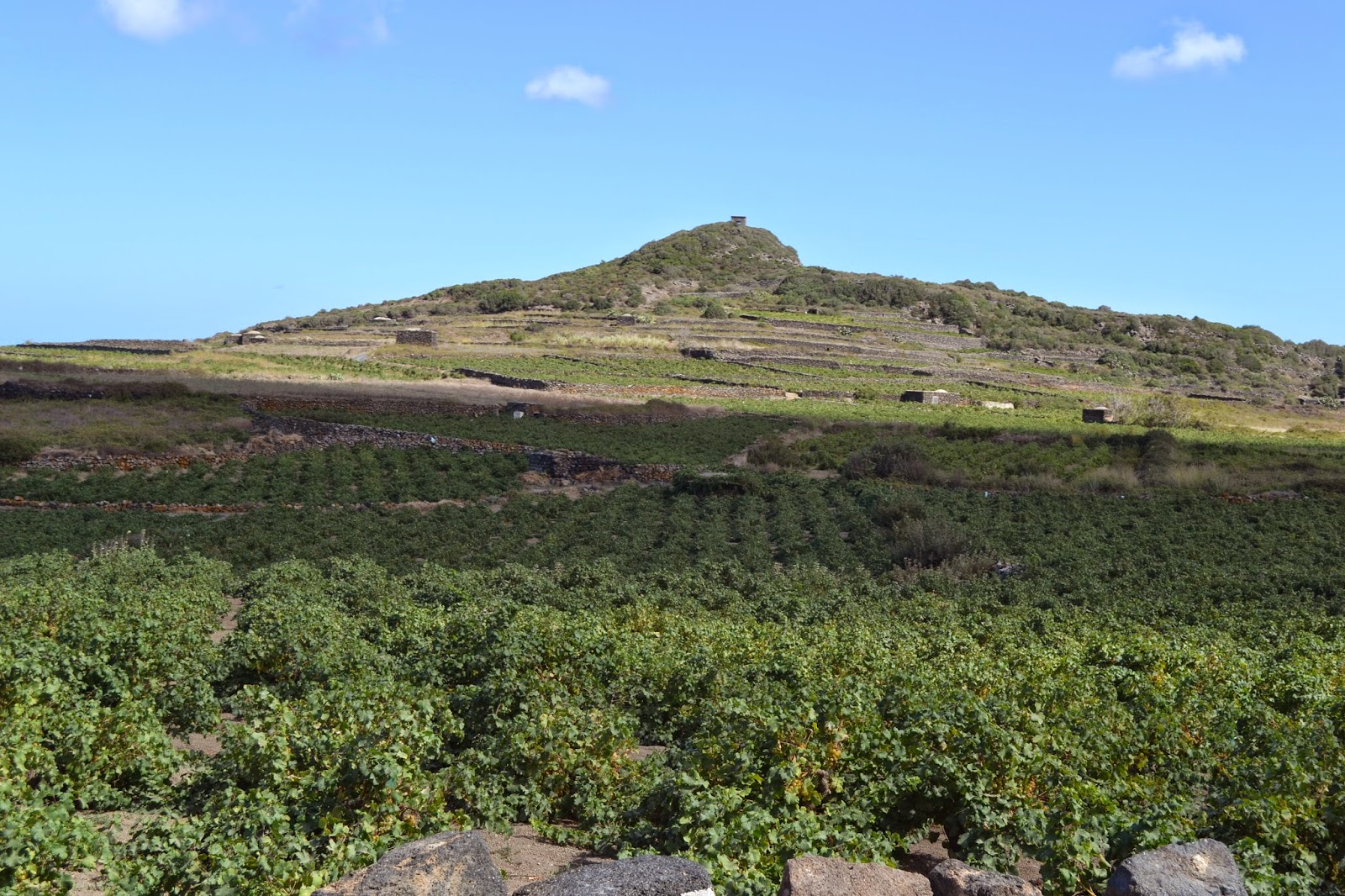 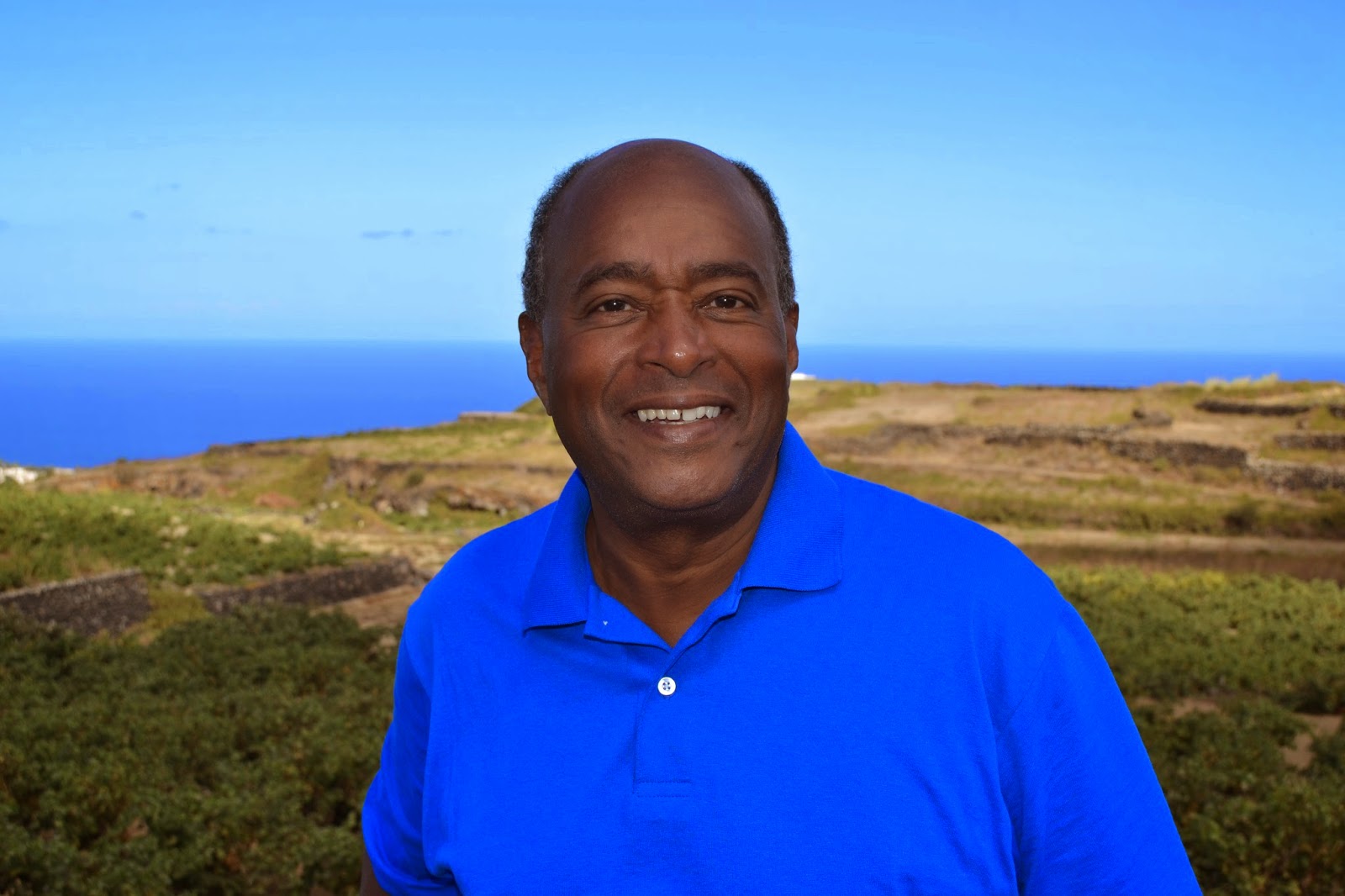 Just another one of the field hands! 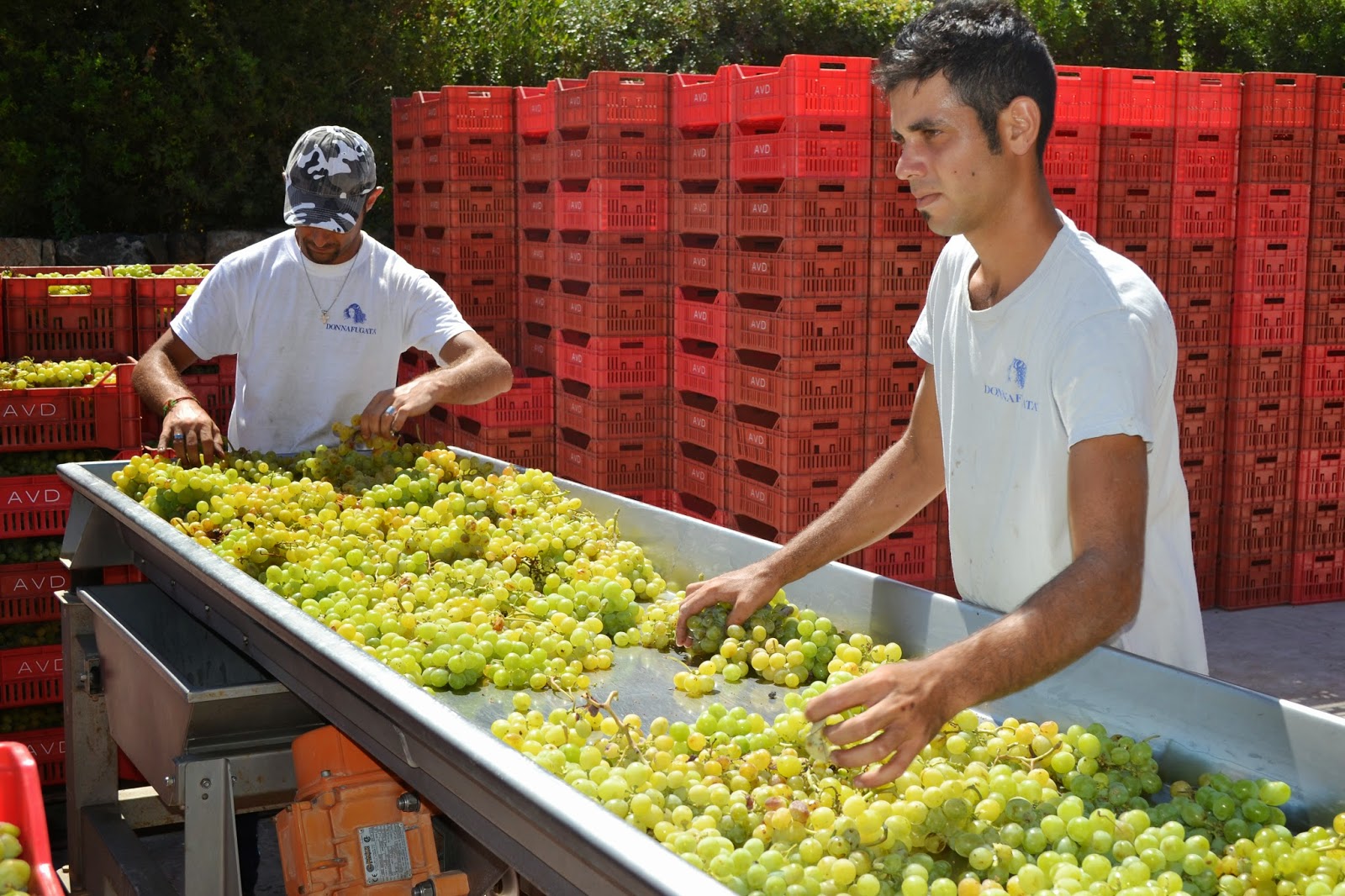 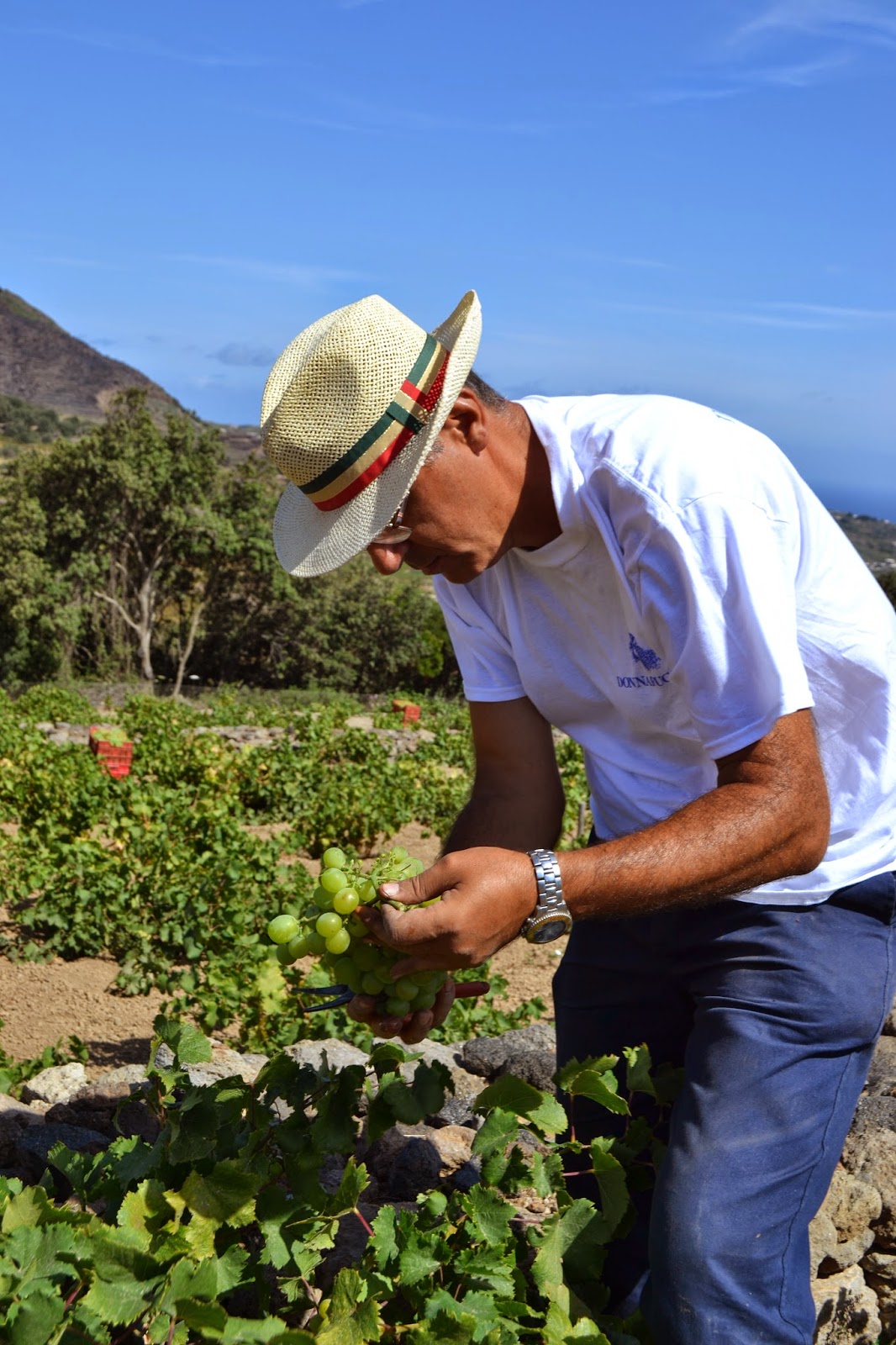 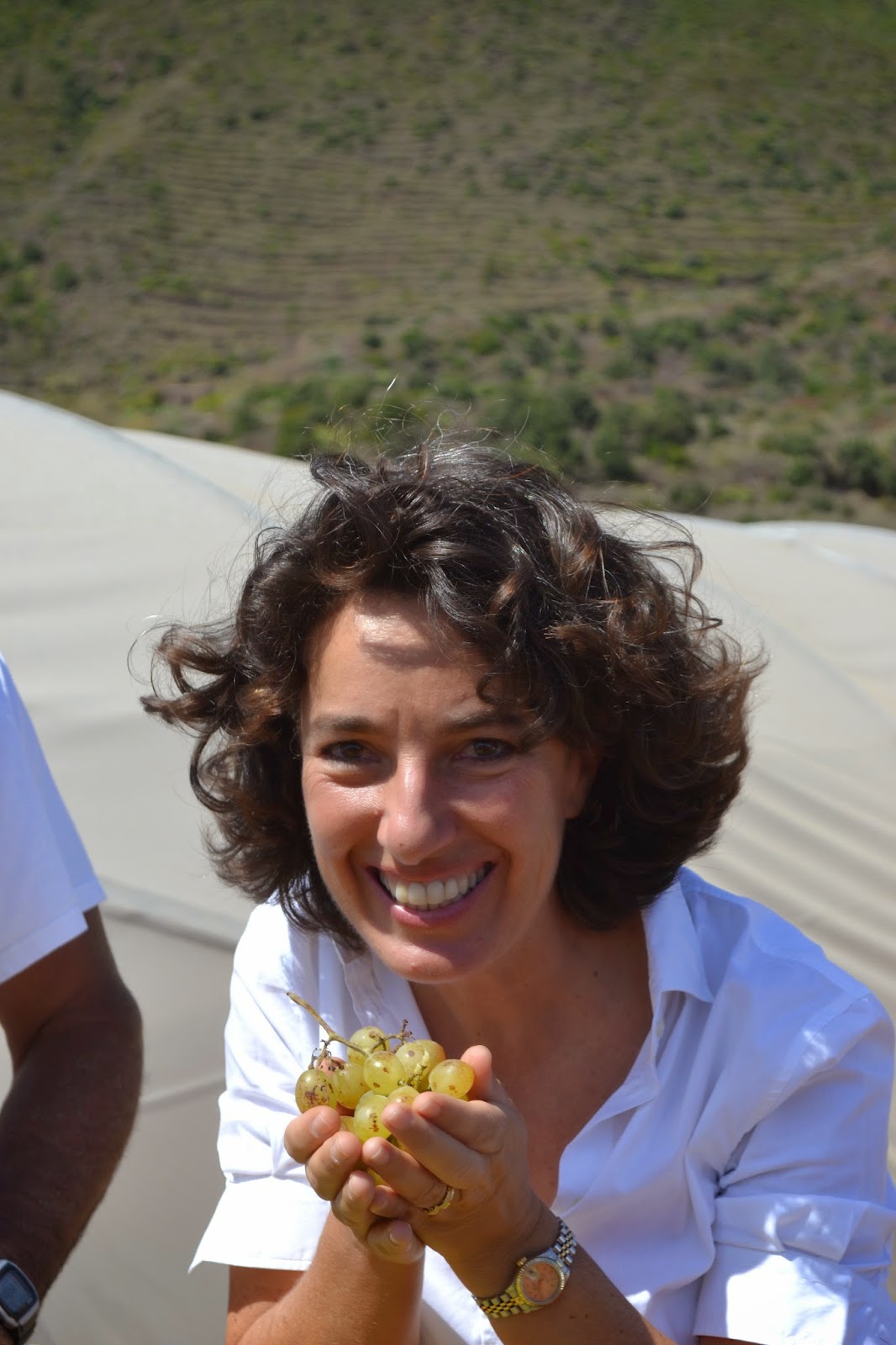 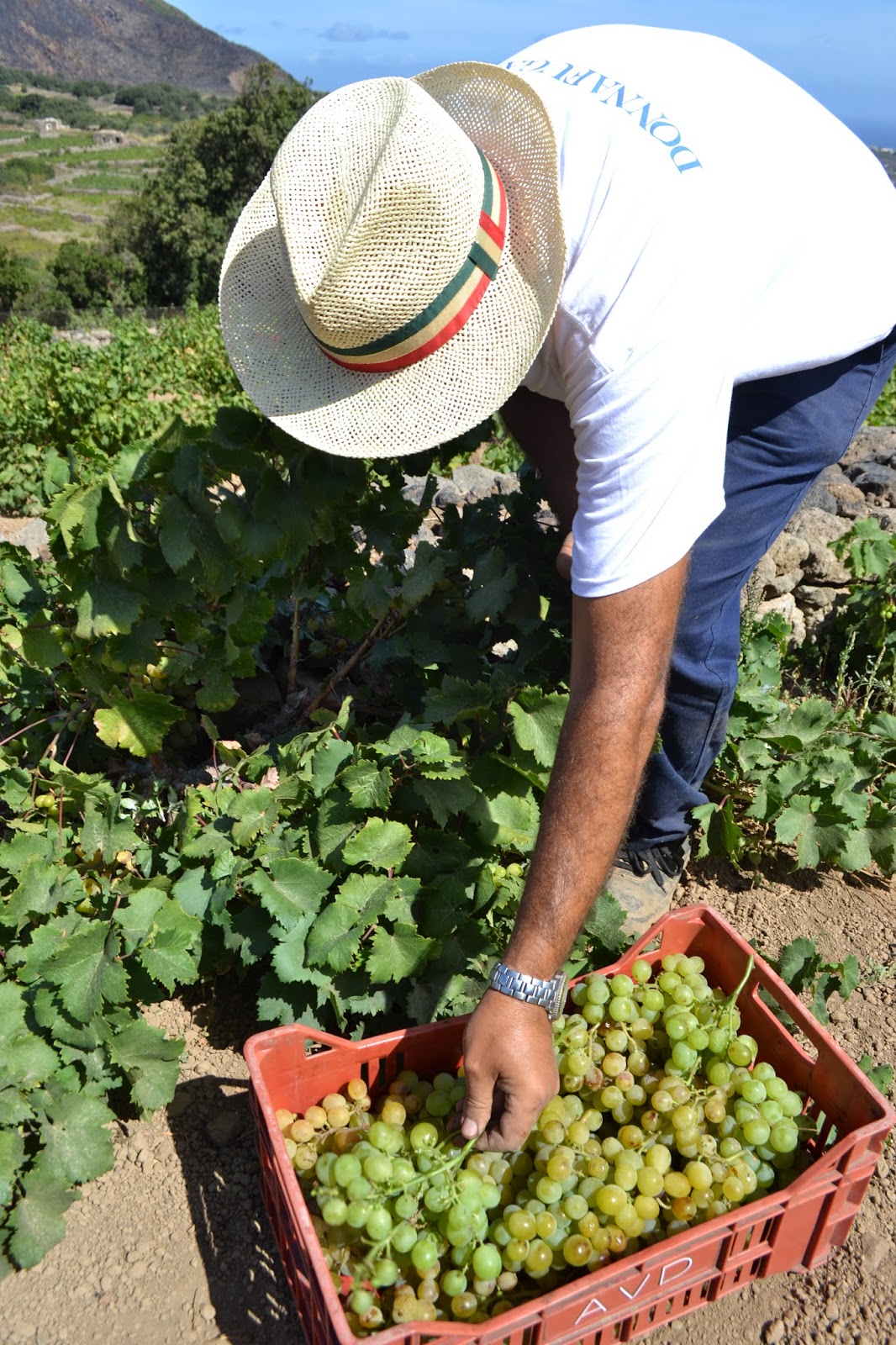 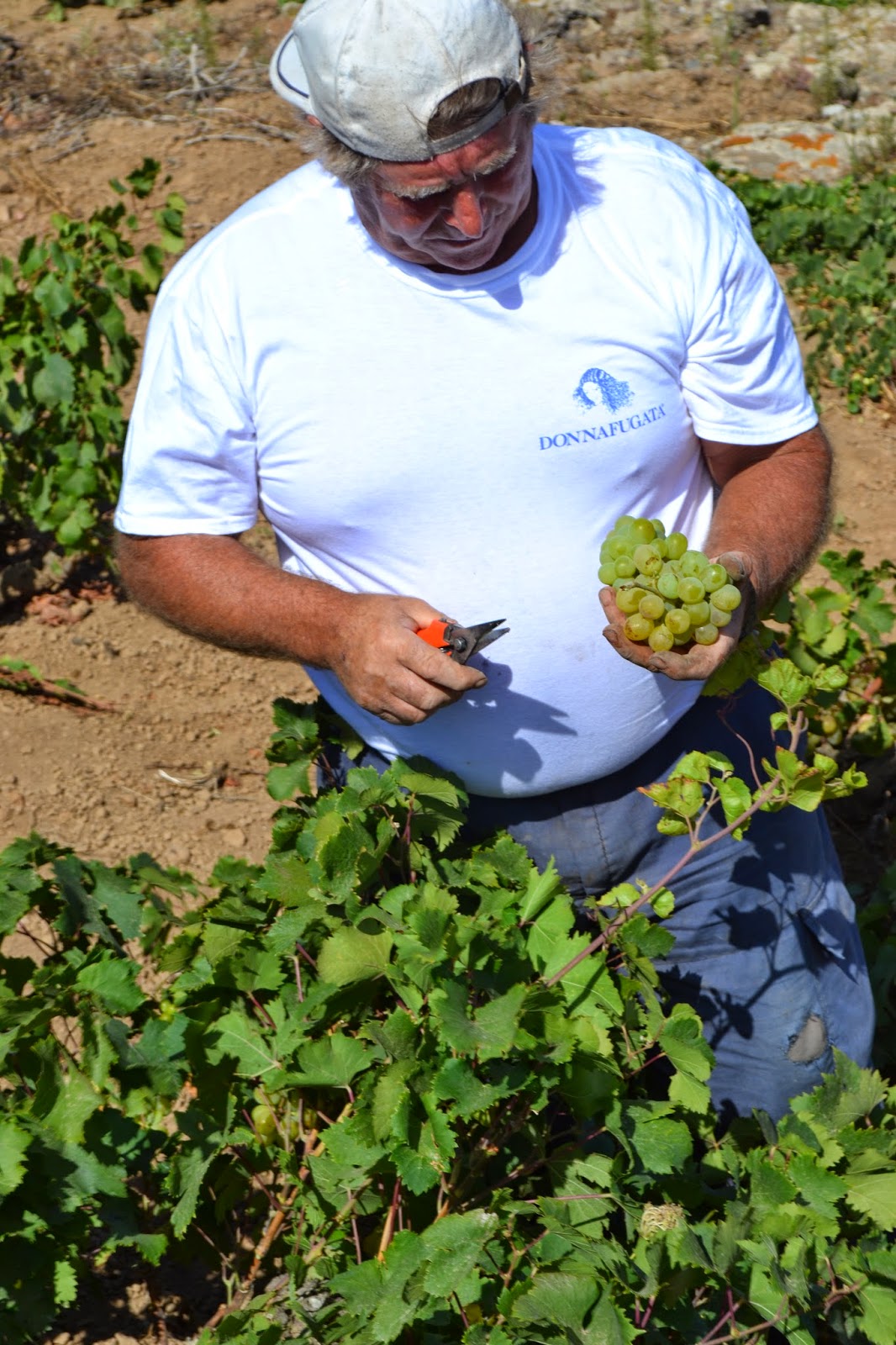 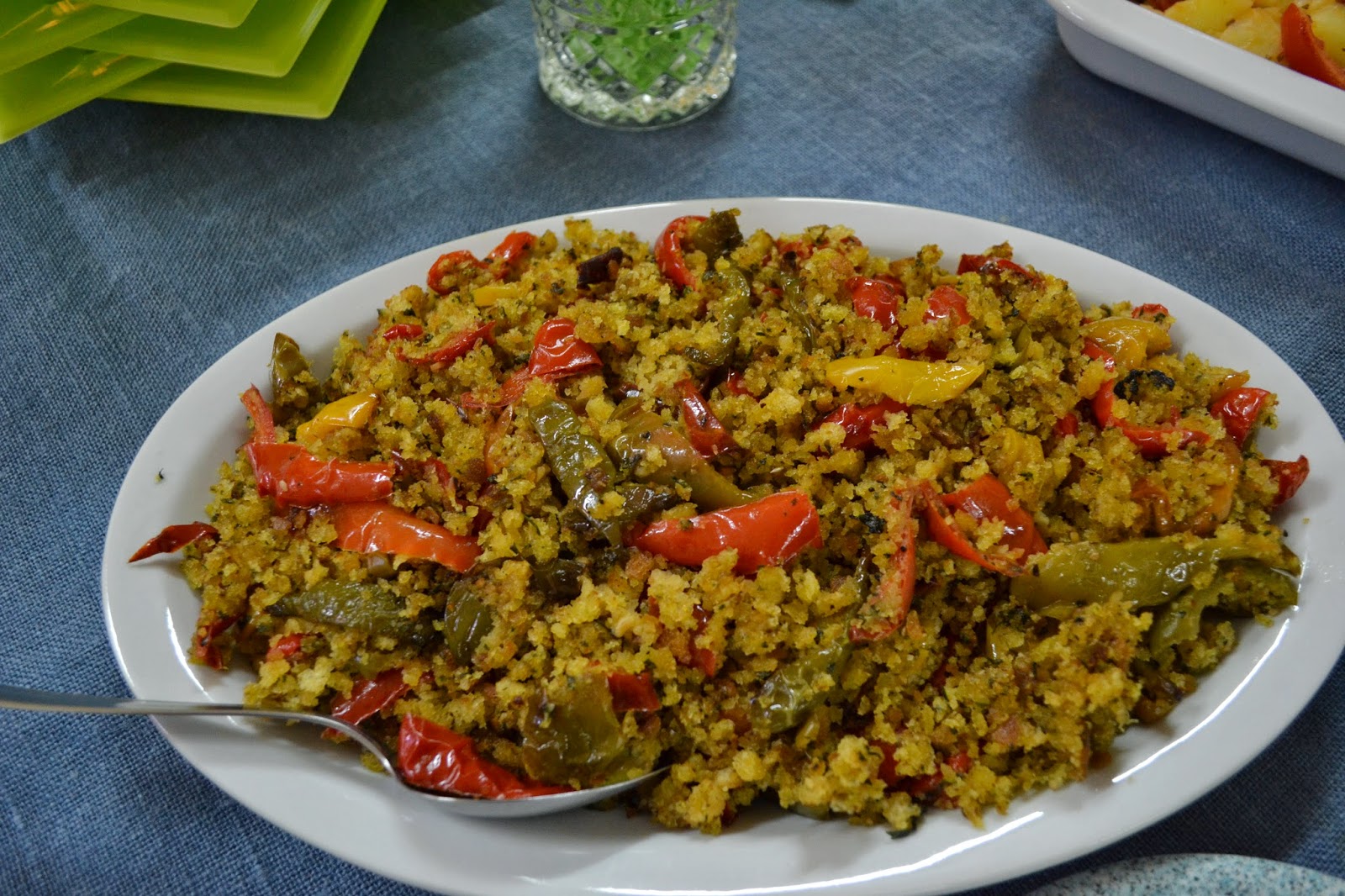 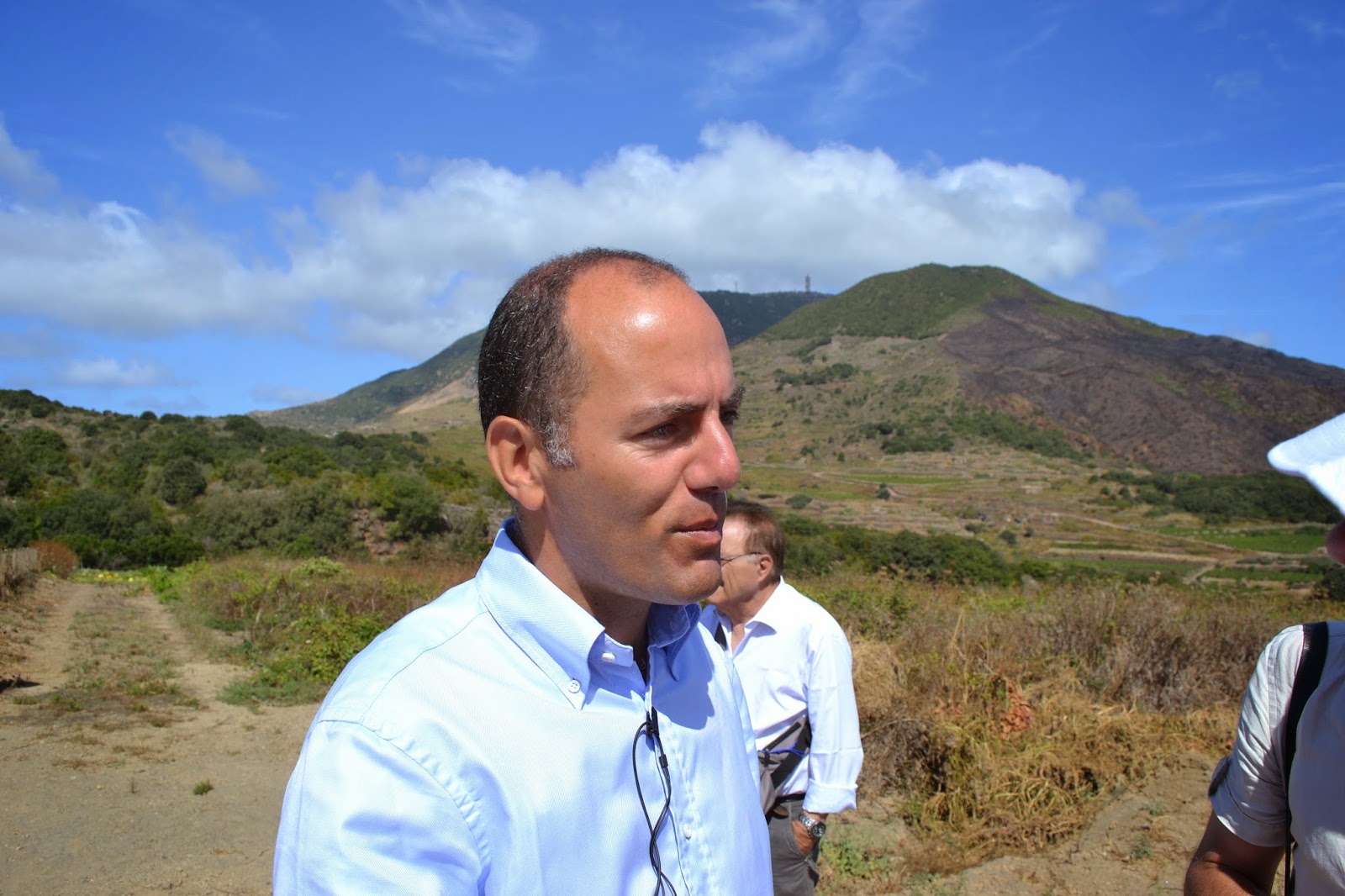 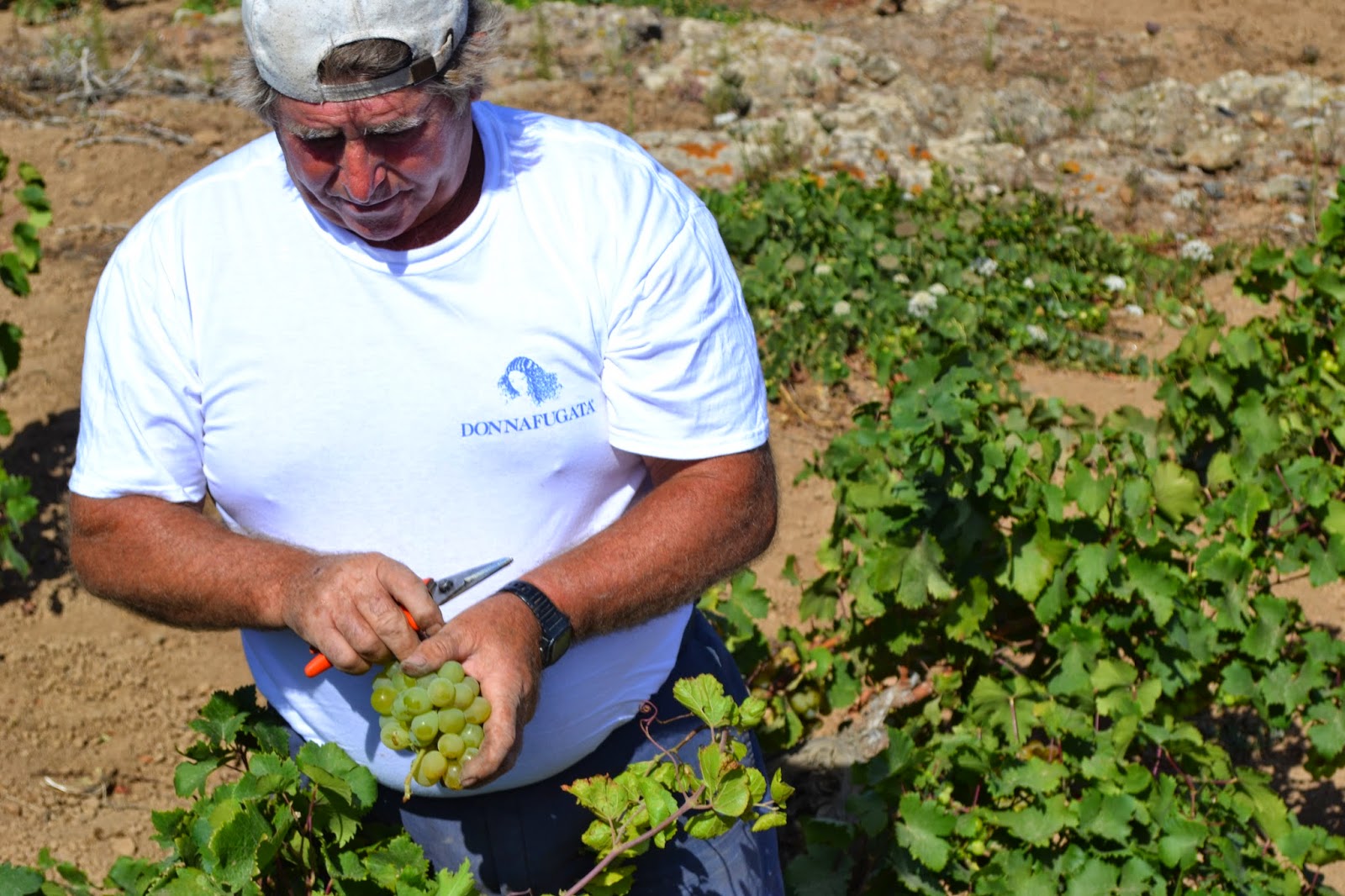 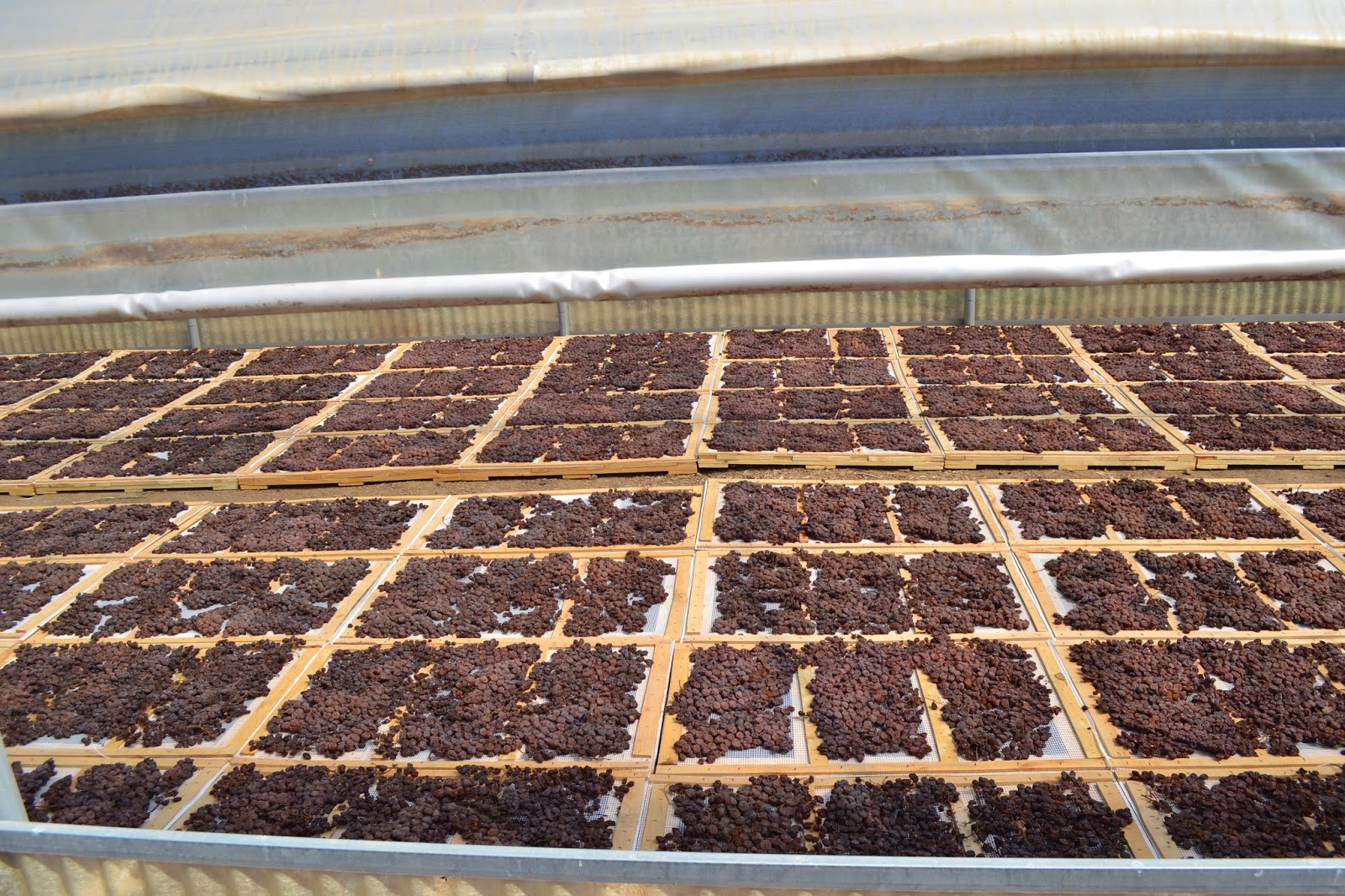 Zibbibo grapes drying "in passito" in the drying sheds at Donnafugata 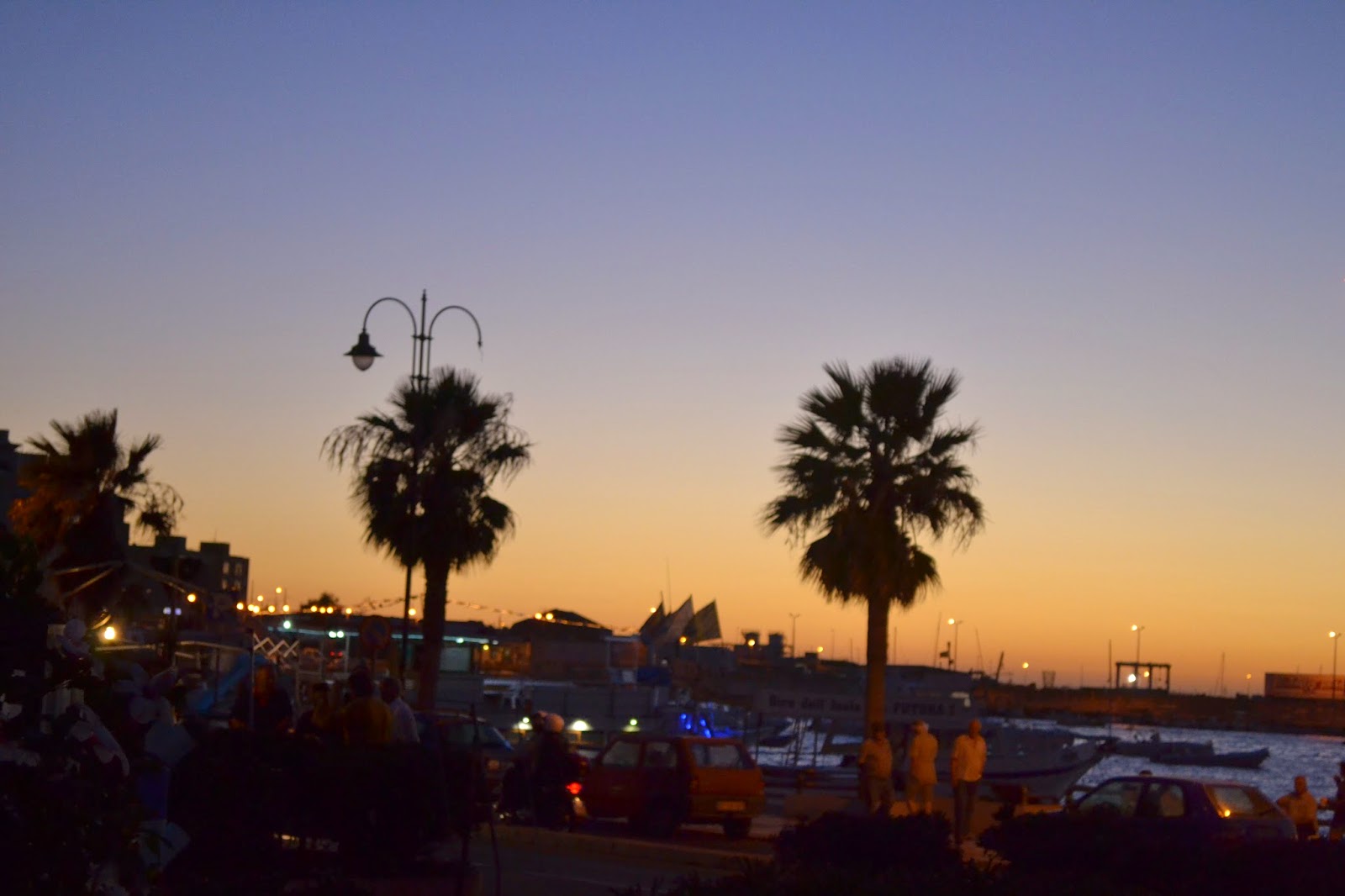 Sunset over the Pantelleria harbor outside Castello Barbacane 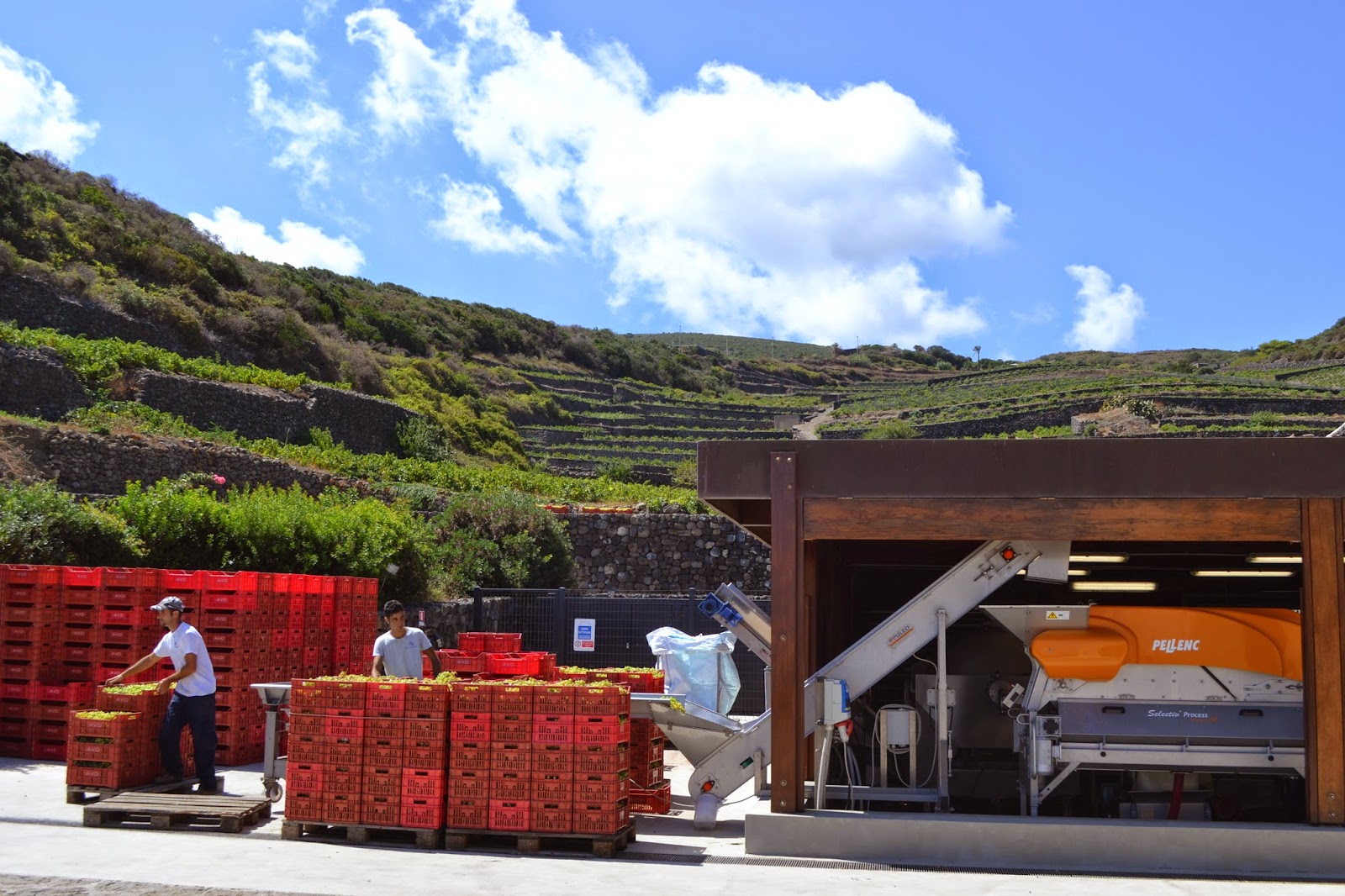 The crushing facility and conveyor belt at Donnafugata's Pantelleria facility 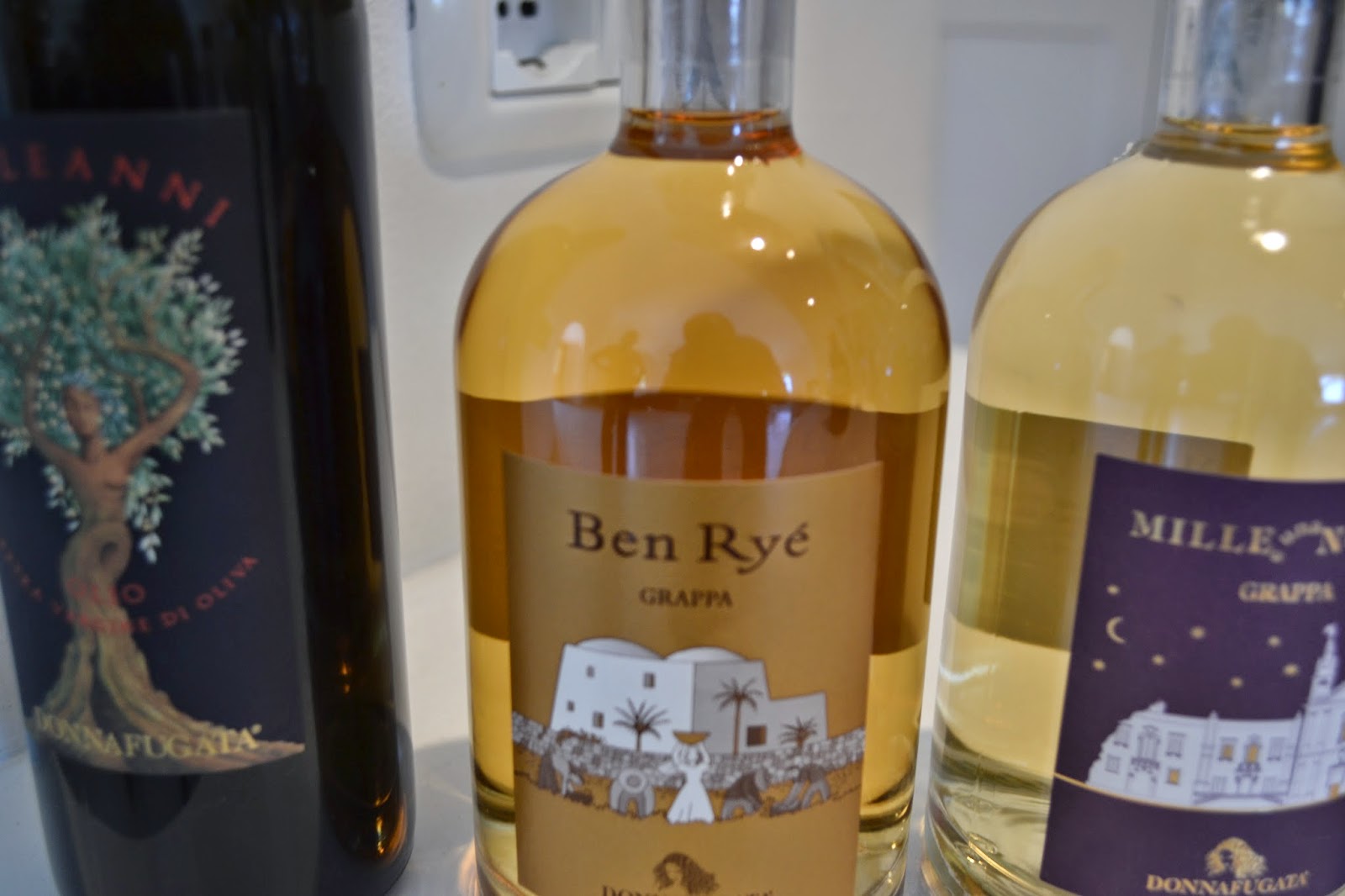 The award-winning Ben Rye of Donnafugata 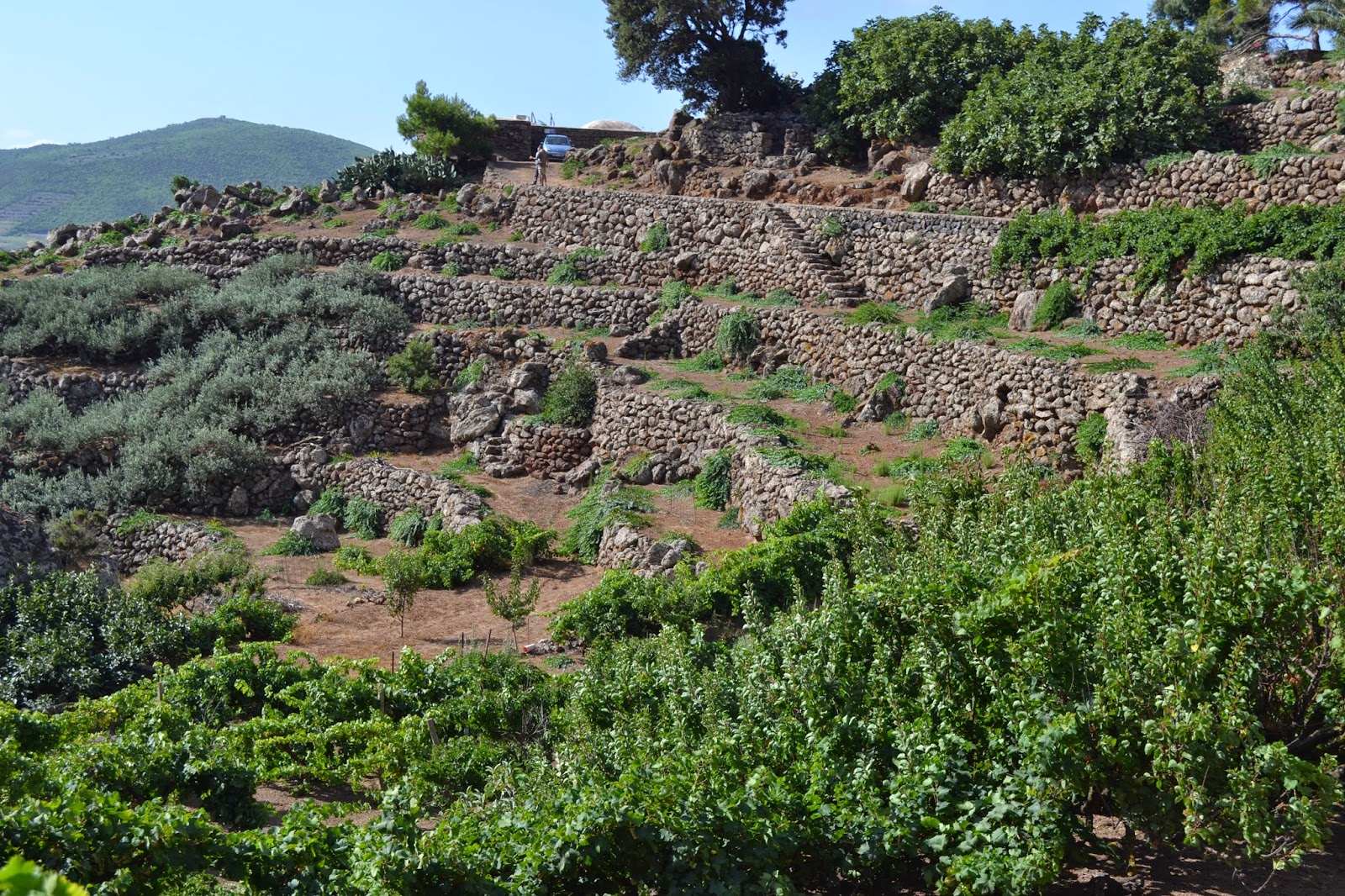 Capers grow wild across the island. Here, they are cultivated by farmers on terraced slopes 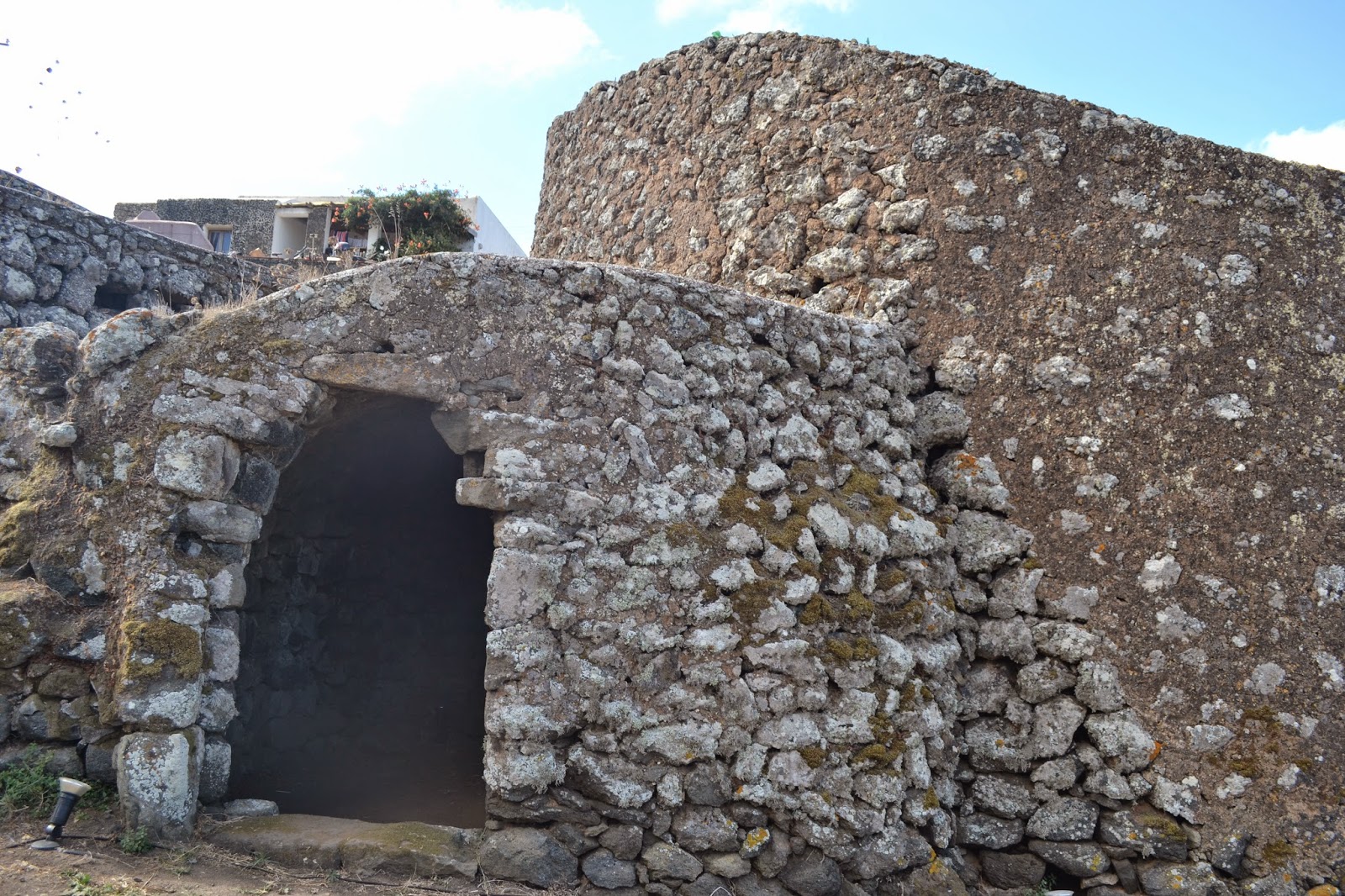 An ancient Bizantine stone house known as Pantelleria Dammuso
Below: Sunset over the island of Pantelleria From August 31 to September 4, the Island of Pantelleria hosted the first edition of the festival Passitaly 2014, dedicated to the naturally sweet wines of the Mediterranean. Organized tastings, tours of wineries, a talk show, a musical and cultural tours highlighted this five day discovery of the wonders of the island.  Pantelleria's Regional Minister of Agriculture, Rural Development an Mediterranean Fisheries,  Ezichia Paolo Reale pointed to the island's importance as a "symbol of the civilization of the vine throughout the Mediterranean area and the nomination of the Zibbibo training system-Pantelleria alberello-in order that is protected and included on the UNESCO Intangible Cultural Heritage of
Humanity List."  The Mayor of Pantelleria, Salvatore Gabriele described the island and its agricultural and viticultural heritage as "one of the finest and most delicate territories in the Mediterranean." With regards to the impetus behind Passitaly 2014, Gabriele said, "We want to affirm the value of an heoic viticulture based on the work of the Pantellerian farmer and their ability to manage the environment and nature in harmony and balance."
Posted by Dwight the Connoisseur at 7:31 AM