WINES OF NAVARRA SPAIN BRING A TASTE OF SUMMER TO CHICAGO AND THE U.S. 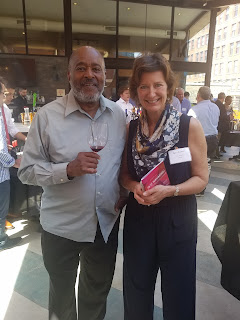 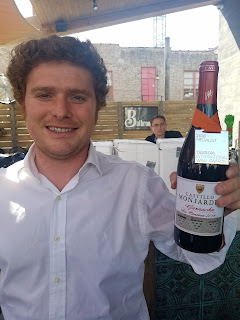 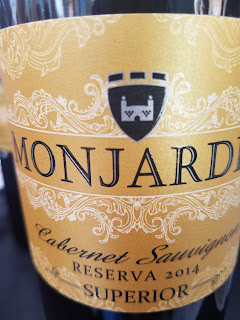 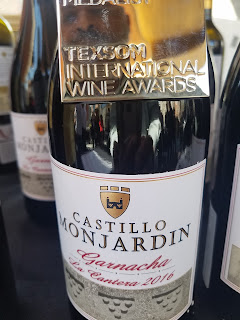 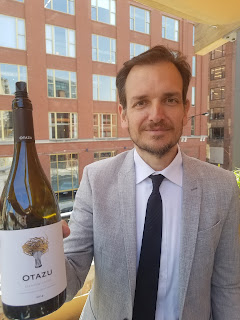 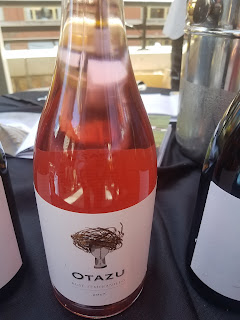 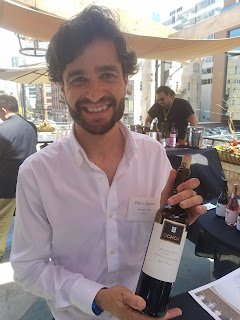 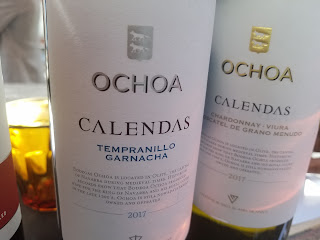 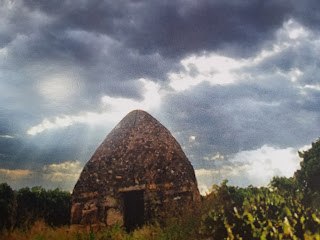 An ancient structure in a vineyard in Navarra 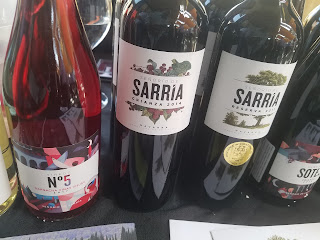 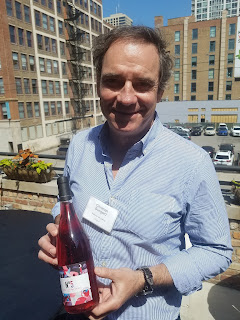 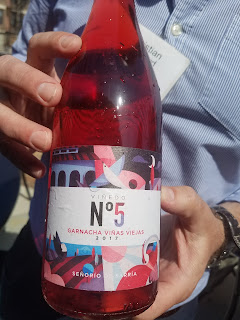 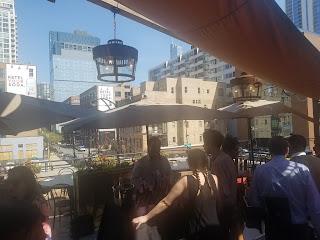 The rooftop deck at Bernie's Lunch and Supper River North 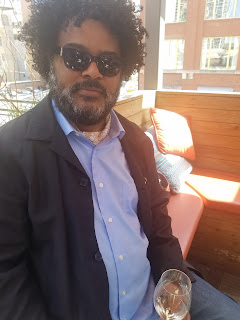 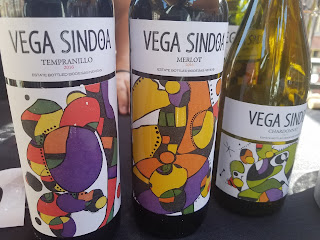 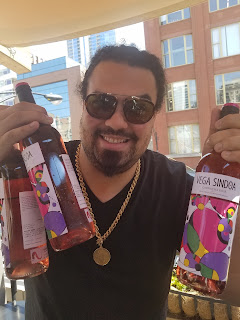 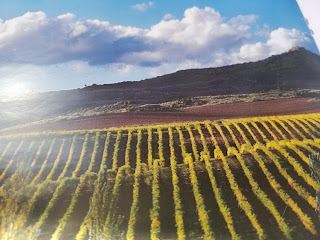 Summer season's most intriguing wines come from one of Spain's undiscovered areas: Navarra. Located in the north of SpaIn just outside of Madrid, its provincial capital is Pamplona, made famous by the Ernest Hemingway novel "The Sun Also Rises" and the festival at the town of Los Sanfermines and the celebrated annual running of the bulls.

The sheer variety and complexity of the wines, not to mention the exceptional value, makes these wines perfect for summer and the wide variety of dishes to be served at garden parties, al fresco cafes and barbecues. The wines are exceptional and selling at bargain prices. Get in on the fun or lose out once they catch on and prices start to skyrocket as in all things worthy!

Chicago's Bernie's Lunch and Supper rooftop deck in the restaurant mecca of River North was the setting for a lavish Grand Tasting of wines from a Baker's Dozen of wineries from D.O. Navarra, Spain. The wines ran the gamut from crisp, fruity Chardonnays to robust Crianza's.

Navarra is known as "the garden of Spain." Made famous by its quality produce and sheep's milk cheeses, it is also praised for its superb vineyards, cultivated for more than 300 years since the arrival of monks during the Crusades of the Middle Ages. Multiple micro climates and a confluence of unique terroir produced vineyards that create an abundance of 'international' grape varieties such as Cabernet Sauvignon and Chardonnay as well as hearty and flavorful local varieties such as  Tempranillo and Garnacha (Grenache).

Wine makers from Navarra were at the rooftop lounge at Bernie's Lunch and Supper in River North to present their wines. Among them were such historic vineyards as  Castilla de Monjardin. Tucked away in the foothills of the Pyrenees along France's border, the winery was founded in 1988 by the Del Villar-Olano family. Wine maker Victor del Villar Olano was on hand to personally pour his selection of wines, ranging from his unoaked 2017 El Cerezo Chardonnay ($12.99) to 2014 Reserva Cabernet ($14.99) . The wines displayed exceptional character, particularly the 2017 La Cantera Garnacha Old Vines. This jammy, red wine displayed all of the bright fruit and balanced structure that belies its youth. With flavors of ripe red cherries and raspberries backed by a hint of spiciness, the wines are a perfect match for grilled meats and barbecue.  I defy you to find another  red wine of such depth and complexity at this price.

Winemaker Giuliano Rosi was a revelation with his Bodega Otazu wines and his recounting of the storied history of the winery and its unique setting and holdings.

"Bodega Otazu is unique," winemaker Rosi explained. " First of all, it is one of 14 wineries in Spain to have the recognition of Vino de Pago, which is the highest category a vineyard can obtain."  Located in Spain's most northern red wine producing area, its setting in a forest is magical. The winery houses one of Spain's largest private museums of art history, with more than 250 pieces of priceless artworks, dating to the Middle Ages. The Manor (Senorio) itself consists of two sixteenth century palaces and a fourteenth century dovecote, intended to house pigeons and doves for their eggs and as a source of food, and a twelfth-century church. Next to all of this is a most modern winery with state of the art equipment and an avant grade underground cellar.

Winemaker Giuliano Rosi described one of the winery's technical processes.  "We have worked very hard, hand-in-hand with the University to develop modern methods of monitoring the humidity and our soil composition. We have sensors placed at various soil depths that tell us exactly when moisture is required for maximum growth potential. This information is carefully recorded and factored in at every stage of the growing process."

Otazu's vineyards are ideally situated with a microclimate of both Atlantic and Mediterranean influences. A blend of alluvial clay terraces, pebbles and rocky terrain create grapes of unique character and complexity resulting in wines of distinction. Otazu 2017 Chardonnay is a fruit forward white wine with bristling flavors of ripe melons, tropical fruits and zesty lemon. The wine is cold fermented under constant temperatures and aged unoaked to preserve its fresh fruit flavor. The wine is very clean and bright with flavors of apple peels, lemon, pineapple and a touch of ripe peaches. Grilled fish and chicken, ripe cheeses and assorted summer salads are the perfect pairing. Have plenty on hand for your next garden party and at less than $10 a bottle, you can't go wrong. Order a case!

Bodegas Ochoa is an exceptional winery from the northernmost village of Olite in the Ribera Alta. Its family history dates back to 1845. Following a long tradition of wine production from the field to the bottle and, ultimately, marketing and selling. the winery remains in the hands of the original family. The married couple of Javier Ochoa and Marivi Aleman are the winery's sole proprietors and their daughters Adriana and Beatriz serve as the winemaker and marketing and sales director respectively.

Everything is done on premises, from the harvesting to bottling. Sales and marketing strategies are conducted and executed in-house. This wholistic approach is evident in the quality of the wines. Ochoa Grand Riserva 2010 can be had for under $20 and is probably one of the great wine buys of the year.

Exceptionally sophisticated and complex, with concentrated  ripe red fruit flavors and hints of baking spice and smoke, this is the wine to drink with your favorite meal of grilled aged Porterhouse or Rib Eye steak and a side of garlic mashed potatoes and grilled asparagus.

NAVARRA WINES ARE THE HISTORY OF SPAIN IN A GLASS

Although the winery was founded in 1953, the history of Senorio De Sarria of Navarra goes back to the 13th century. Located in the heart of the pilgrim's route to Santiago in Puente la Reina, its sun drenched slopes offer the perfect climate and soil conditions for a full range of top-quality wines. Each of its grape varieties is able to find its perfect place in its 247 acres of vineyards. Light, humidity and temperature conditions are carefully monitored to allow the wines to express their uniqueness of terroir to their fullest. Winemaker and Technical Director Milagros Rodriguez has honed a philosophy of harmony. "For me, a good wine is a wine that is able to express by itself. It is able to speak about the soil, the region and the climate from which it comes. This is a wine where all of the grape varieties combine to form an harmonious whole."

Bodega De Sarria's Marketing Director Christian Bungard poured six wines from the current portfolio; Senorio de Sarria Chardonnay 2017,  Senorio de Serra No.5 Rose  2017, Crianza 2014 Red, Vinedo Sotes 2014 Red, Riserva Especial 2012 Red and Riserva 2011 Red. The wines are all in the $8 to $10 range and represent terrific value. The Sardinia No. 5 Rosada, for example, is 100% Garnacha (Grenache) and is a crisp, dry rose brimming with bright, candied fruit flavors; ripe red wild strawberries, raspberries, pomegranate and a hint of tarragon. The wine sells for an astonishing $6 in most retail shops. Great with grilled salmon or herb  stuffed Branzino. The latter is a delicious Mediterranean fish also known as "Greek Sea Bass." It is typically roasted whole, slathered with lemon juice  and olive oil and thrown on the grill.  You can accomplish the same result in a super hot oven, but over the open fire is how they roll in Spain. Save some Bodega De Sarria wine to sip with some ripe Manchego cheese by the fire pit as you watch the sun set in blazing tones that will have you thinking that you're gazing at the Pyrenees.

Posted by Dwight the Connoisseur at 11:21 PM