DAY ONE: A VISIT TO COLLE MASSARI, A TOURIST'S OASIS IN THE HEART OF MONTECUCCO 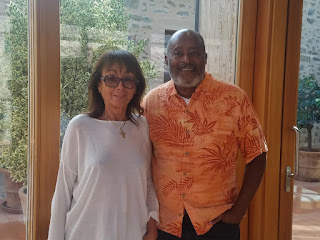 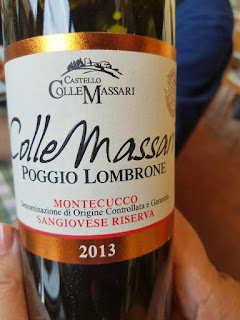 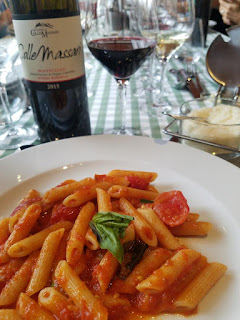 With homemade pasta and basil/tomato sauce from locally sourced ingredients 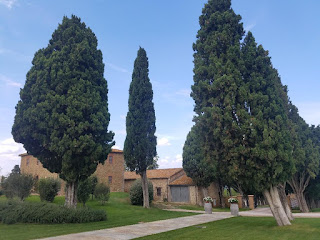 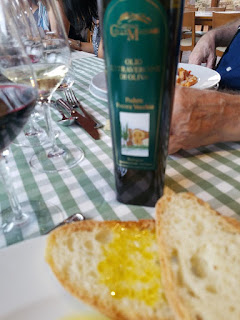 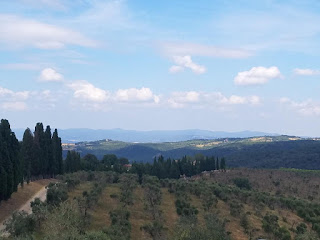 The vineyards of Colle Massari from a terrace view 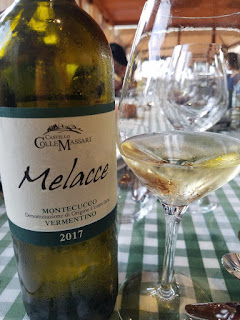 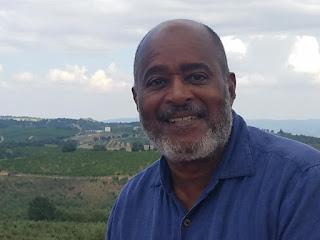 Poggi del Sasso, Grosetto, Italy--Move over Brunello di Montalcino and Chianti Classico, there's a new star in Tuscany, Italy's most celebrated wine region. Its Montecucco, a new wine region in Southern Tuscany that just made DOCG (Controlled and Guaranteed Designation of Origin), Italy's highest wine classification. Bordering on the famous DOCG of Brunello di Montalcino, on the far side of the Maremma, it is one of the region's most dramatically beautiful areas with its vineyards in  nestled in the shadow of the ancient and extinct volcano Mt. Amiata, which protects the vines.

Vineyards located in the rolling foothills are planted in soil that is  a combination of clay and sand. Wine in the Montecucco is primarily 100% Sangiovese, Italy's premiere native grape. Some producers choose to blend their wines, often combining them with revived versions of local grape varieties that have gone extant. Still others are combining local grapes with international varieties, to stunning result.

When Maria Iris and brother Claudio Tipa founded Colle Massari in 1998, their goal was to create a true "Domaine" in Tuscany. Their ensuing efforts created Grattamacco in 2002 and Poggio id Soto Estate in 2011.

Cole Massari is ideally situated in upper Maremma territory in the foothills of Mount Amiata. The vineyards gain the benefit of low lying morning fog that bathes the grapes in moisture before giving way to blazing afternoon sun and gentle mistral breezes from the Tyrrhenian coast. The farm features olive trees, from which the winery creates its own virgin olive oil as well as various mixed crops of organic and sustainably grown fruits and vegetables.

The wine is carefully harvested and the grapes are sorted on a vibrating table and then in a rotation device. Fermentation then begins at very low temperatures stainless steel tanks, while the reserve wines will be routed through cone shaped vats and then punched down by hand to extract all of the full natural fruit flavor of the grapes. Aging then begins in giant Slavonian oak barrels before being transferred to smaller French oak barrels for 10-24 months of aging, depending on the type of wine.

All of the wines are aged to preserve the unique character of the grapes. They are all designed to go with that varied local cuisine, which was brought out in stunning detail at a gala dinner. Among the menu items was a soup of local cannelloni beans with crunchy bacon and rosemary roasted bread, followed by homemade Tagliatelle pasta with local organic Porcini mushrooms, followed by a main course of sliced grilled locally sourced steak with red radicchio and Pecorina cheese served with roasted potatoes.

The wines ranged from Colle Massari Mentecucco 100% Vermentino DOC to Monteccuco Rosso Riserva, a blend of 80% Sangiovese, 10% ciliegolo and 10% Cabernet Sauvignon to Grappa Colle Masari made from a blend of Sangiovese, ciligiolo and montepuciano with that all time favorite Italian dessert, Tiramisu.

Cole Massari is the ideal place to being an ecotourist's excursion of the Montecucco. Its spacious apartments with private kitchens, terraces with views of the mountains and vineyards and amenities such as a swimming pool and full service spa for massages, facials, manicures and other corporal treatments, is the ideal way to explore the lifestyle of the Montecucco.

Posted by Dwight the Connoisseur at 3:43 PM