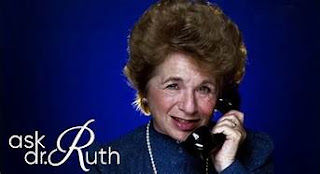 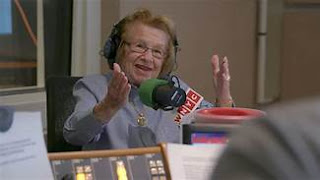 Dr. Ruth Westheimer is perhaps the most recognizable personality on the planet. In fact, she was the first celebrity  to be known simply by her first name; Dr. Ruth. She's done everything but fly into outer space. She's been to the White House, spoken before the United Nation's, was sung to by Kermit The Frog on Sesame Street. She's even been parodied on Seinfeld.  But, for someone who is so ubiquitous, very little is known about her  life. Who is the real Dr. Ruth? She says it just as  bluntly as she discusses sex on the nation's airwaves in the unflinching documentar, Ask Dr. Ruth, now in theatres everywhere; "I am an orphan of the Holocaust, not a Holocaust survivor"

Documentary filmmaker Ryan White rolls back the covers to reveal the true, unvarnished story behind this diminutive dynamo. With her distinctive thick German accent and elf-like personage, Dr. Ruth has afixed herself for all time in the nation's bedrooms. Few who have heard her call-in radio show or seen her on syndicated TV know her real story. Ask Dr. Ruth lets her tell her own story, as only she can. Combined with White's unblinking camera, mixed with archival footage, TV and radio broadcasts, photos and brilliantly conceived animation, it is one of most wholly satisfying and thorough biographical films of its type.

White's camera follows her in the days leading up to her 90th birthday. Born Karola Ruth Siegel in 1928 in  Weisenfeld, a tiny idyllic burg outside Frankfurt, Germany, she was sent to a safe-haven in Switzerland as part of the Kindertransport after her father was taken by the Nazis. She lived in and was schooled at a orphanage there, keeping in touch with her parents via letters. When the letters stopped coming in 1941, she feared the worst, but persevered. It was not until much later that she learned that her parents had been murdered in the Holocaust, possibly at Aushwitz.

One little unknown fact about Dr. Ruth is revealed in the film, the diminutive 92 year old was once a sniper! Having emigrated to British controlled Palestine after the War, she was recruited into the Haganah in Jerusalem, where she was trained as a scout and crack sniper. She was severely wounded in an explosion during the Israeli War of Independence in 1948 and had to learn to walk all over again. From there, she emigrated to France, where she studied and taught psychology at the University of Paris. Armed with a 1,500 dollar stipend from the World Bank earmarked for the Kindertransport high school graduates from the orphanage, Westheimer used the money to secure transport on a ship bound for New York. As the sight of the iconic Statue of Liberty came into view, an harmonic conversion of events were set in motion that created the nation's first pop sex therapist.

It was after receiving a Master Degree at the New School and earning a Doctorate at Columbia's Teachers College, that lightning struck. She came under the tutelage of the famed  Dr. Helen Singer Kaplan, whose pioneering research virtually invented the discipline of sex therapy. The rest, as they say, is history.

After giving a riveting lecture to New York educators on the need for sex education, she was offered a 15 minute radio show on public radio station WYNY after no one else on the faculty wanted to do it.The show, which ran after midnight on Sundays, became an overnight (literally)  hit. It wasn't long before she would move from a  local public radio station to national radio syndication which evolved into television. Thus, a national sex therapy institution was born.

Ask Dr. Ruth is a film that both informs and inspires. At 92 years old, Dr. Ruth is more recognizable than the Pope, published some 40 books with more on the way, and has a lecture and TV appearance schedule that would exhaust a person a third her age.  Its a film rich in visual texture and substantive message. Take the family. They may want to even sit through it more than once. Its that good.

.
Posted by Dwight the Connoisseur at 4:32 AM