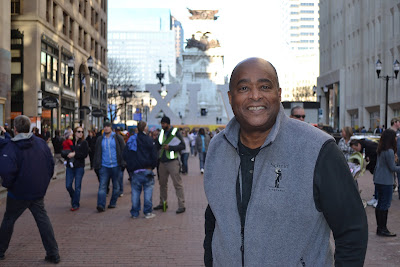 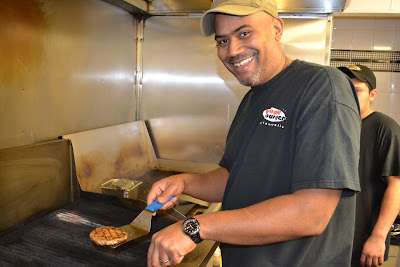 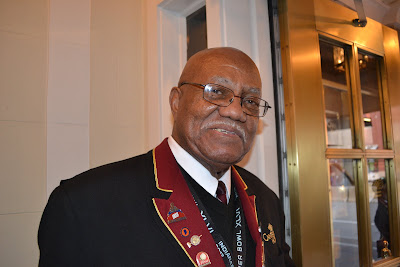 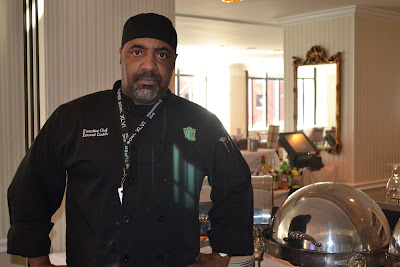 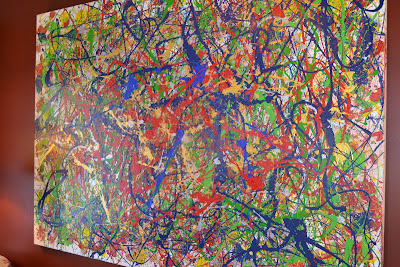 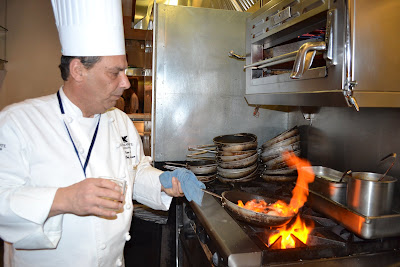 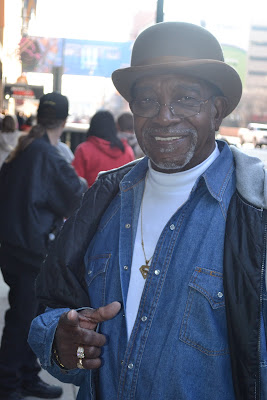 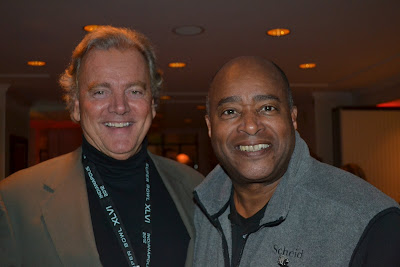 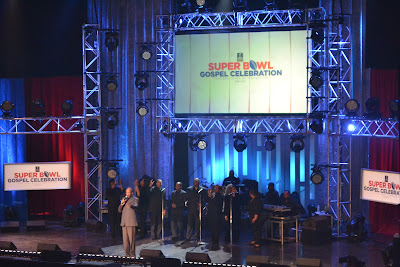 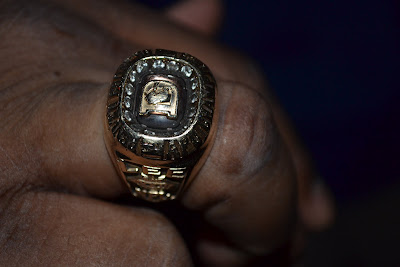 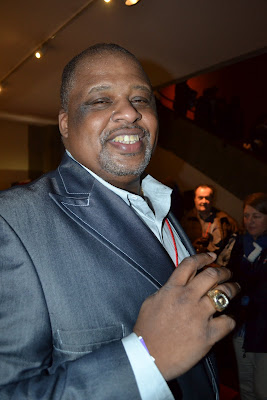 Photo essay and story by Dwight Casimere
1. Dwight The Wine Doctor at Monument Circle, downtown Indianapolis
2. Mark Radford and his Boogie Burger
3. John Gibson, an Indianapolis institution, greets visitors to the Canterbury Hotel
4. Canterbury Executive Chef Erenst Luster mans the VIP Lounge in Diann's
5. A Turner Woodard original
6. A denizen of Super Bowl Village comes out in his party regalia
7. Canterbury Hotel creator and artist Turner Woodard with Dwight The Wine Doctor
8. Donny McClurkin and the NFL Player's Choir at the Super Bowl Gospel Celebration
9. This is what it's all about, a Super Bowl Ring
10. Larry Lee, Colts '87, shows off his hardware
Indianapolis---From riding the first-ever urban Zip Line 14 stories above Super Bowl Village, to rubbing shoulders with NFL Legends proudly displaying their Super Bowl rings and sharing their stories of past gridiron glories, to dining on fine Tuscan inspired cuisin one night and then on the world's most massive burger the next, Super Bowl XLVI is a showcase for contrasts in this historic, yet vibrant city.
Sitting in the VIP lounge of the Canterbury Hotel, overlooking the main plaza of Super Bowl Village, owner Turner Woodard reflected on the city's efforts to restore and revive its many monuments and historic buildings, while still keeping pace with modern times through the many soaring highrises that are monuments to the art of architecture. Turner, a developer who specializes in restoring and renovating historic properties is also a gifted artist who began his career as a teen-aged prodigy. His artwork hangs throughout the Canterbury Hotel, formerly the Warren Hotel, which he purchased and lovingly restored to its original grandeur."This is just a small part of what we're all about in Indianapolis. We're a great repository for the past, but, what we're showing here by hosting the Super Bowl, is that we're a terrific, modern city that's capable of orchestrating an event like this, while still portraying the hospitality and genuineness that we're known for."
Executive Chef Rino Bagilo of Osteria Pronto in Super Bowl headquarters JW Marriott hotel took diners on a culinary tour of his native Lake Como, Italy with his outstanding interpretation of nuevo Tuscan cuisine. "I do everything with a passion, especially when it comes to all things Italian, " he told me after flambeing an order of his Calamari Fritti in olive oil and flavored with pepperoncini, capolini onion and garlic aioli, followed by an exquisitely fresh Insalata Giglio, a composed salad of Bib lettuce, yellow and red heirloom tomatoes, cucumber, and white balsamic vinegar reduction. The offerings reached a fever pitch with his Canalonis (Italian crepes) of braised, pulled pork stuffed with spinach and a creamy velloute white sauce, similar to a Bechamel followed by white and black ink raviolis stuffed with lobster and served with a roasted lobster tail cooked in Chardonnary, butter and lobster reduction. The Chianti Classico wine and bubbly Prossecco were the perfect accompaniments in this oasis just off the lobby of the Super Bowl Media Center and the Host Committee headquarters.
On the other end of the spetrum, a visit to the nearby trendy Broad Ripple district, brought a stop at Boogie Burger, an upscale eatery that specializes in custom bourmet burgers. Owner/Chef Mark Radford, an Indianapolis native, began nurturing the concept as a young executive for a major pharmaceutical company while living in New York. "I've always loved food. I started, watching my grandmother cook and then, when I live in New York, my aunt, Valerie Jo Bradley, at her brownstone in Harlem. I opened a catering company that provided light fare and sandwiches to corporate clients at the companies where my friends in the industry worked and it grew from there. When I left New York and that industry, I moved back home to Indianapolis and started lying the groundwork for what you see here. This has always been my drean and as you can see, its starting to bear fruit." Radford got behind the grill and made the larges burger this reviewer has ever had-the Monster Burger, complete with bacon, pastrami, cheddar cheese, onion rings, and topped with a fried egg. It would take a Super Bowl-sized appetizer to finish it all at one sitting!
The following evening saw the unfolding of one of the premiere events of Super Bowl XLVI, Super Bowl Gospel Celebration at historic Clowes Memorial Hall on the beautiful Butler University campus. Hosted by Rev Run and CeCe Winans, it featured Fantasia, the soul-stirring resonant voice of Natalie Grant, the electrifying three-tie Grammy winning Donnie McClurkin with the NFL Players Choir (yes, the choir is composed of all present and former NFL players, and they can really sing!) and the off-the-charts finale, led by Bishop Hezekiah Walker. The VIP reception, which honored sponsors Comcast, Verizon and American Family Insurance and the NFL, offered an opportunity to mingle with NFL alumni, several of whom shared their personal testimony of struggle, sacrifice and ultimate triumph onstage and flashed their Super Bowl rings offstage. It was the prelude to the exciting hours leading up to Super Bowl XLVI.
Posted by Dwight the Connoisseur at 9:48 AM