Relative newcomers to the U.S. wine scene are the wines of Carignano del Sulcis, from the island of Sardinia in Italy. Sulcis is an area in southwestern Sardinia, an island best known for its spectacular beaches, moreso than its wine. Yet, within that breathtaking landscape, swept by wind and sand, lie the hearty, ancient vines from which grow the Carignano grape, which has its roots in antiquity. Thought to have been originated in Carinena, Aragon, this red wine grape is widely planted through France and Spain. At its inception, it was transplanted to Sardinia, Algeria, and much of the New World, where it quickly gained acceptance. In the mid-twentieth century, it was the driving force in jug wine production in California's Central Valley and figured prominently in the French Algerian War. Upon Algeria's independence in 1962, the French were cut off from their supply of Carignan wine and growers in Southern France were forcerd to plant their own vines for wine production. At its high point in 1988, Carignan was France's most widely planted grape variety.

Forged by Sardinia's relentless winds and cosseted by the islands' sandy soils, the Carignano grapes are cultivated through the use of the ancient "alberrllo latino," or Latin vine training system, which allow the vines, many of which are 65-70 years old, to thrive in the extreme climatic conditions of the territory. As a result of the rigors of the growing environment, the grapes accumulate an abundance of  sugars and secondary compounds that stimulate  tannins that give the grapes and the resulting wines a striking smoothness and complexity of flavor.

Tom Hyland, Italian wine enthusiast and author of the book "Beyond Barolo and Brunello: Italy's Most Distinctive Wines," presented an authoritative luncheon and seminar, showcasing five wines from the region, with two  winemakers from the Consorzio Carignano Del Sulcis, Marco Sartarelli of Santidi and Dino Dini of Sardus Pater,  present to assist in the presentation. The culinary team at Eataly's Baffo restaurant prepared a stunning menu that shed new light on the expansive pairing possibilities of these highly versatile red wines. Most retail in the $35-$45 range-a bit on the high end, but considering their food-friendly character and exotic beauty, they are well worth the price and will guarantee much lively conversation at the celebratory table.

Salumi Misti, a selection of house cured hams and pepper encrusted mortadella provided the first course along with a rather light, uncomplicated wine, Calasetta Tupei 2011. Made from 100 per cent Carignano grapes from the Island of Sant'Antioco, the wine is an intense garnet color with flavor to match. At once intense, and ethereal, it has warm notes of the Mediterranean breezes that nurtured it. There are hints of vanilla and an aftertaste of bright, red pomegranate juice that drips from the corners of your mouth and a touch of wild, black raspberries and a whiff of cardamom and allspice, from 6 months of aging in durmast barriques. This is an exotic beauty that, unfortunately, has yet to reach our shores. But, be on the lookout for its presence soon. It will be sure to excite your palate.

Mesa, Buio Buio 2010 ($45), pronounced Boo-yo, Boo-yo, is guaranteed to get the gourmet party started. With its simplistic, but distinctive label, which emulates the patterns of ancient Mediterranean rugs, the wine is dark and intense, A product of sand, clay and sub-alkaline rocky soils, this medium-bodied wine has a lush texture and beautiful balance. Hints of red berry and crushed violet blossoms mingle with balsamic vinegar and just an aftertaste of Mediterranean sea salt and garam marsala spices that lend a distinctive aftertaste on the palate. Farfalle (blow tie) pasta, combined with Rock Shrimp, set off with chili flakes and salty pancetta (Italian bacon) and tomato were the perfect accompaniments. All of the wines seemed to have a salty undercurrent to them, so dishes seasoned with ham or utilizing some type of seafood or tomatoes, which are inherently salted, all seemed to work best with the wines.

The third course, handmade pappardelle (free form wide, flat noodles) with a traditional meat sauce (ragu') from Bologna, was the logical companion for AgiPunica, Barrua 2011 ($35), an elegant, sophisticated wine made with 85 per cent Carignano and 15 per cent other varities for smoothness and balance. The typical brown soils, consisting of sand mixed with clay and limestone, give the wine its complex character, structure and body. Heavily laden with ripe, red fruit, its flavor can almost be discerned from its intense ruby-red color. There are layers of spices and fragrant herbs, such as sage or rosemary. There's even a hint of capers, which are also indigenous to the region.  This wine puts you in mind of the Holidays, because it surely captures the aromatic essence of frankincense and myrrh, the Original Gifts of Christmas. This is a wine that should be served a little bit chilled to gain its full expression. It's a big wine, with 14.5% alchohol content and a persistent flavor of red fruit and pepper that manages an harmonious finish in spite of its strength. Red meat and red sauces are best with this rich, red Mediterranean beauty.

"As you can see by my photographs, the vines of the Carignano grape are like no others," Hyland explained in his exceptional presentation. "These vines are all on the average of 70 years old, but, as you can see, the grapes seem to thrive in the stress of the high winds of well-drained soil. The fact that there's such intense sun during the day, combined with the cool winds and dense morning fog, lend the grapes their complex sugars and refined tannins."

Sardus Pater, Is Arenas 2009 ($45) was the centerpiece, with a show-stopping presentation of grilled lamb chops, presented on the long bone, covered in a balsamic glaze with an underpinning of eggplant and sprinkled all over with pine nuts, which further enhanced the salty undertone of the wine. This was a spectacular presentation, with flavor to match. It set the wine off as winemaker Dino Dini described the mistral winds of Sardinia. "The strong winds are as much a part of the wine as is the soil," he emphasized.

A final course of various local cheeses, marmalade and toasted almonds accompanied Santadi, Terre Brune Carignano Del Sulcis Superiore DOC 2010($55), gave free rein to this full-bodied wine. Grown from Old vines and made with 95% Carignano and 5% Bovaleddu, another local grape, this is a deep, ruby red wine with hints of garnet on the rim, an indicator of its high alcohol content. Complex flavors of deep purple, ripe plums, blueberries and hints of juniper and a handful of cinnamon bark and freshly shaved nutmeg dominate the nose and palate. There's also a distinct finish of dark chocolate and tobacco that makes one think of the library of a men's club with deep, red leather chairs trimmed with brass hobnails. Intense, yet elegant, this wine was aged 16-18 months in new, fine-grained French oak barrels. It is extremely cellar worthy and can age another 7-8 years. At 15% alcohol, the flavor is long-lasting and pleasant. this is a perfect way to end an evening. This wine almost doesn't need any accompaniment. It's a terrific meditation wine, best enjoyed by a roaring fire. 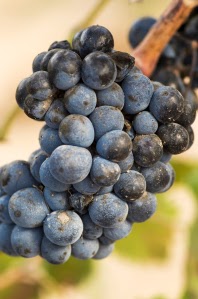 The Carignano grape in its natural habitat of sandy, rocky soil under intense sun 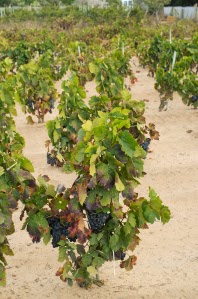 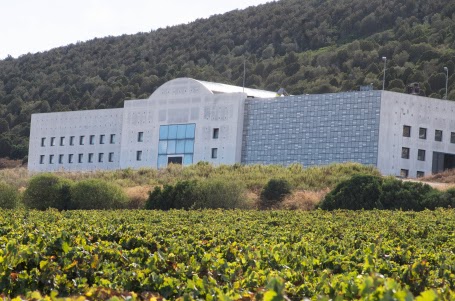 A modern production facility in the Carignano Del Sulcis 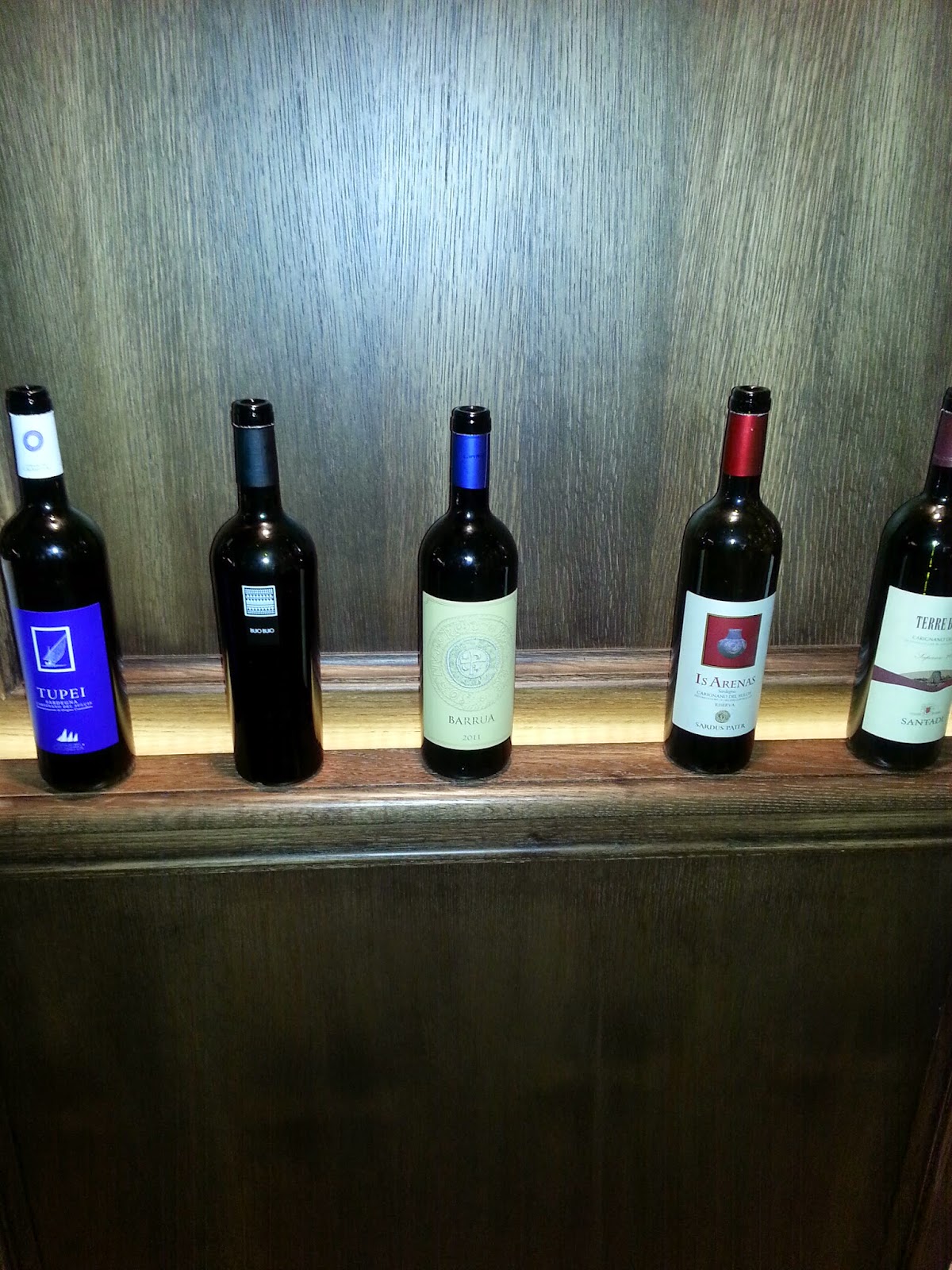 The wines of the Carignano Del Sulcis 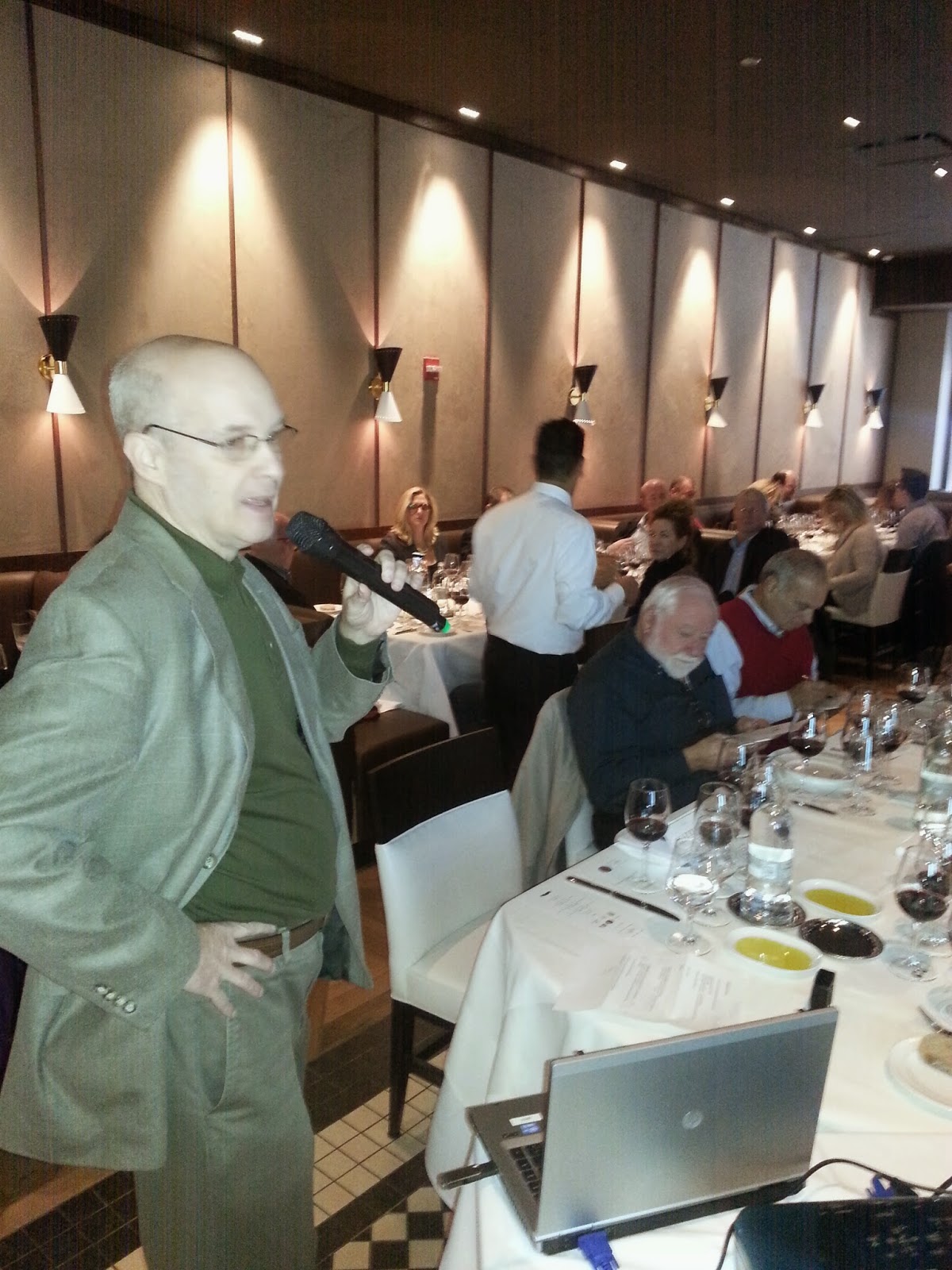 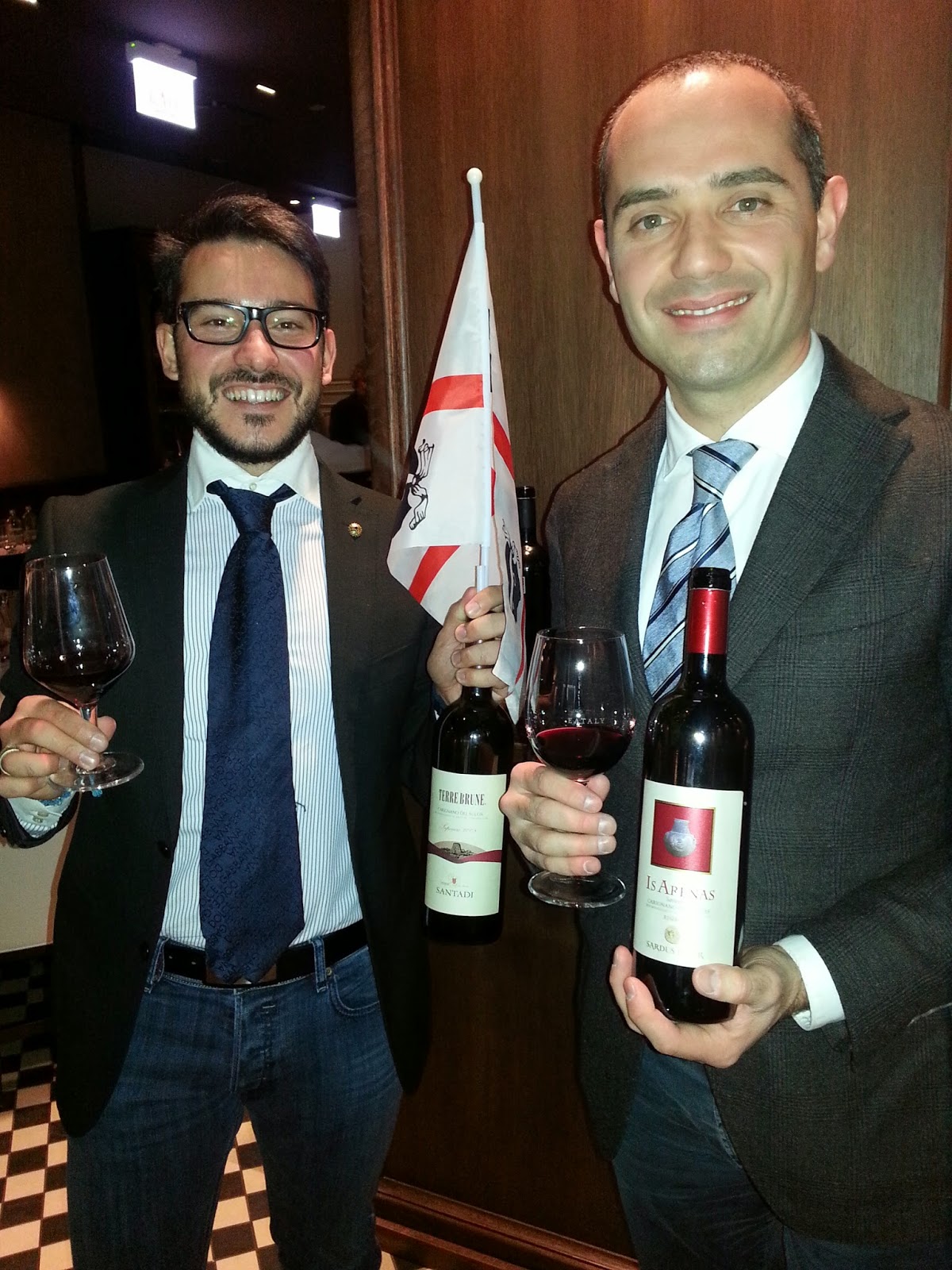 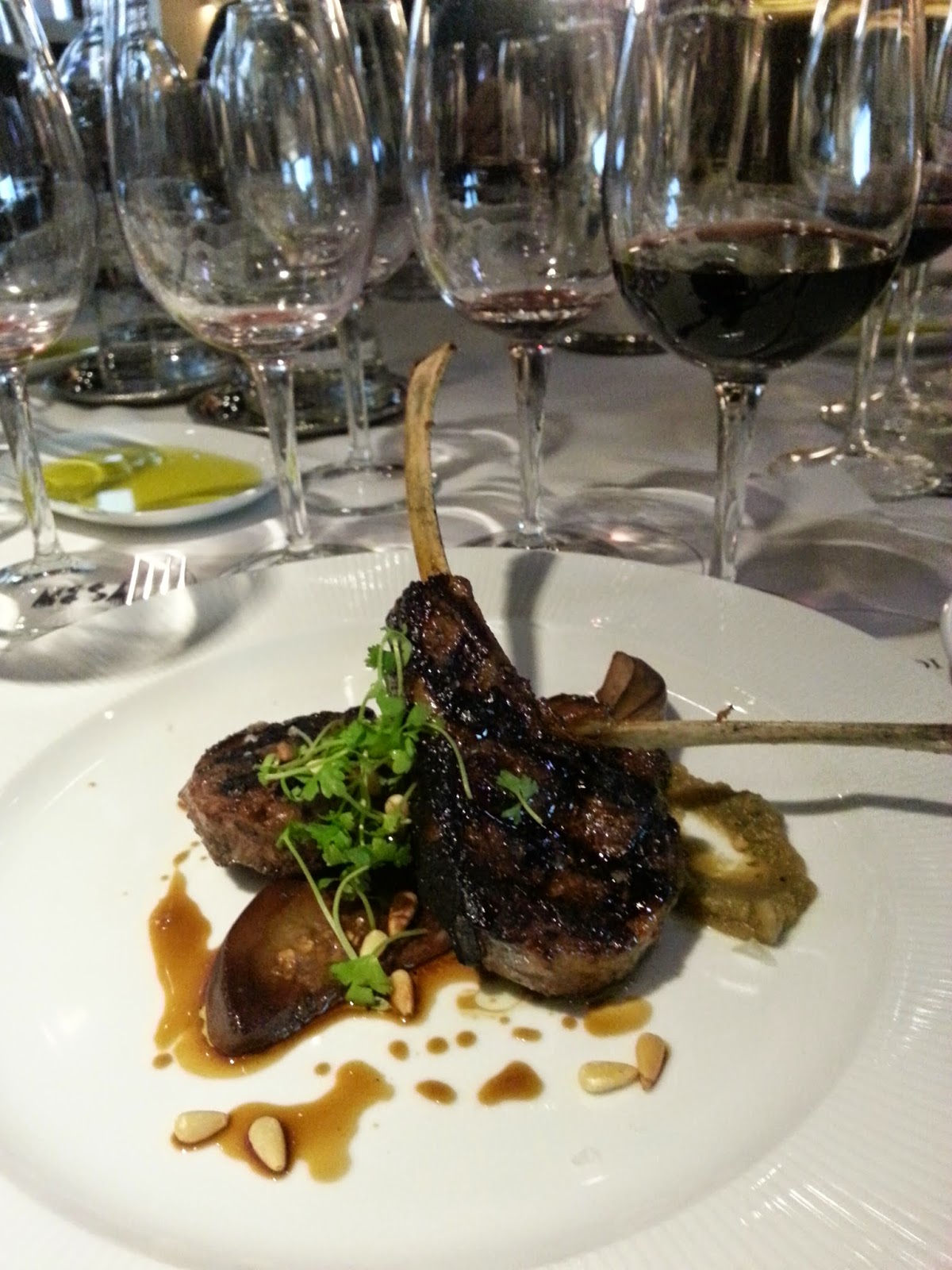 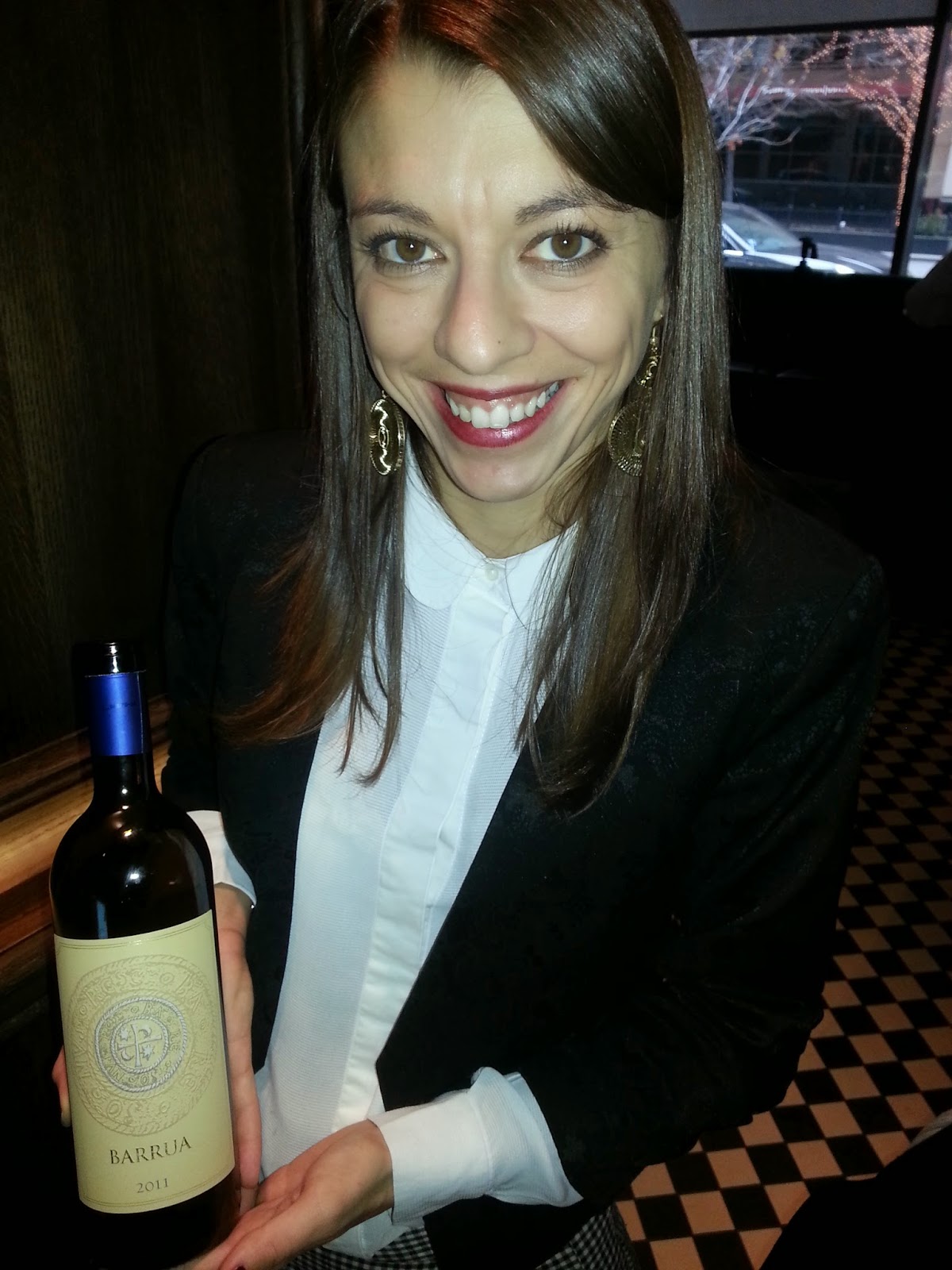 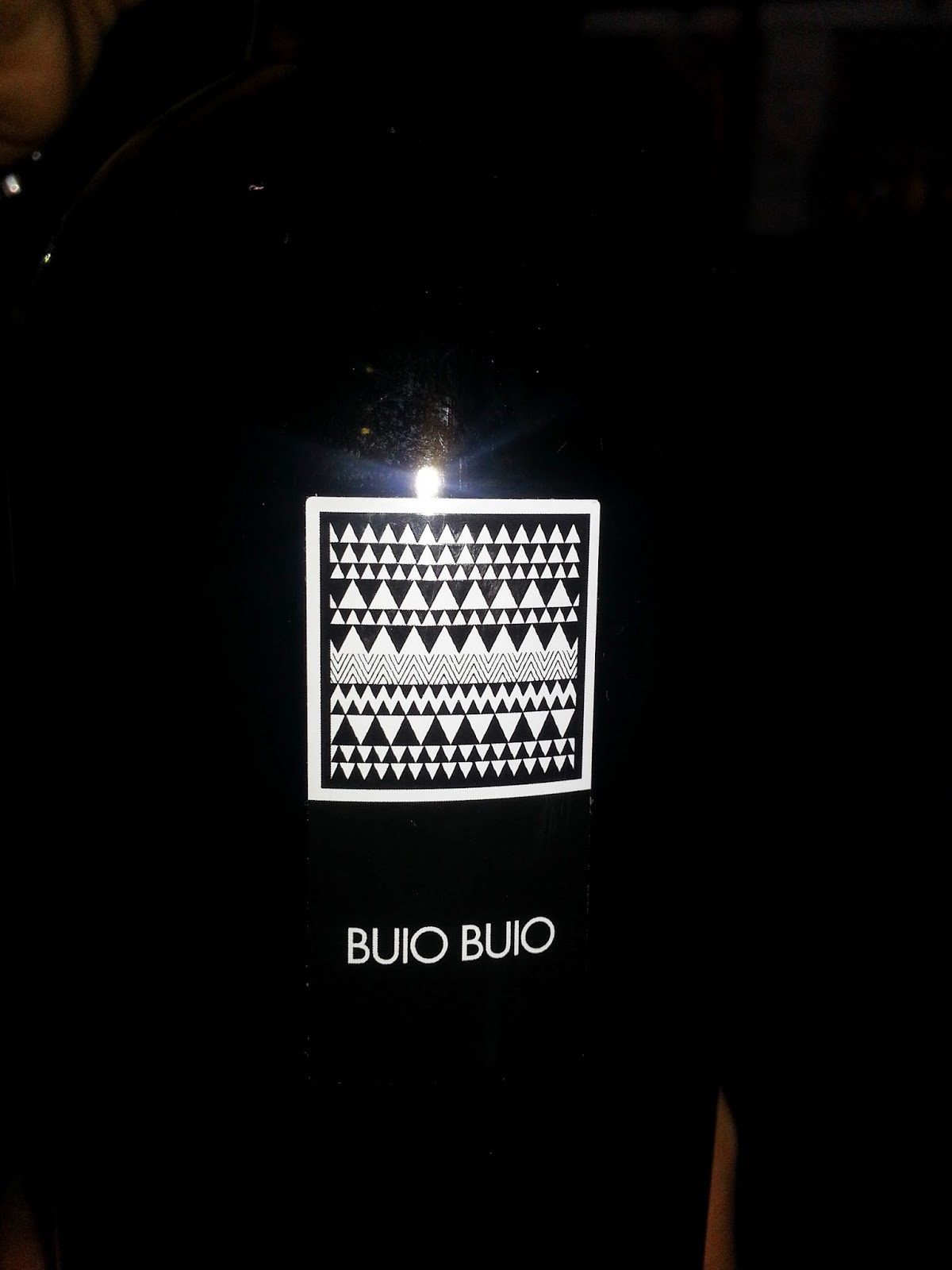 Farfalle (bow tie) pasta with Rock Shrimp (below)  is paired with Mesa, Buio Buio 2010 (above) 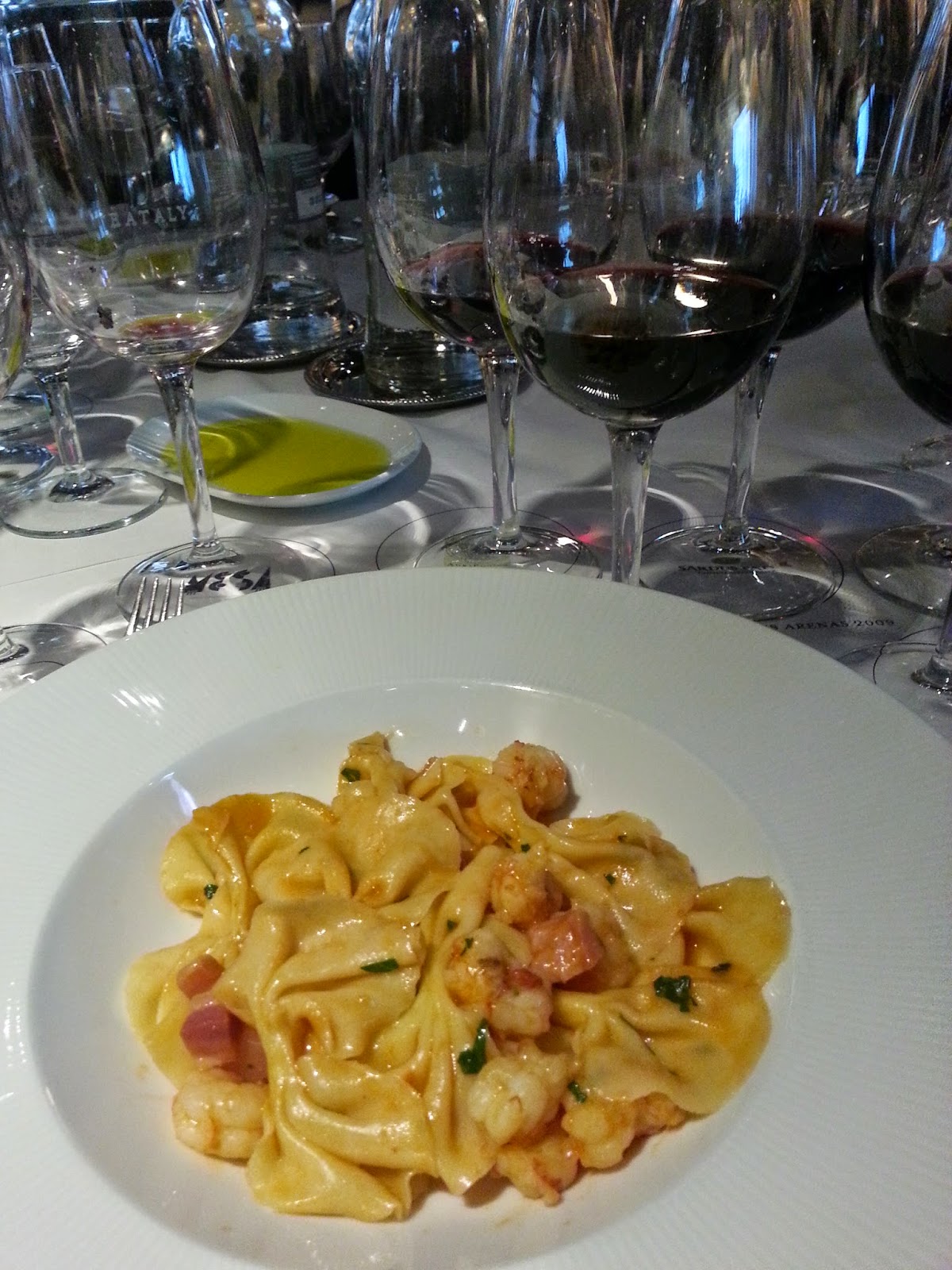 Below: Some of the outstanding wines of the Carignano Del Sulcis 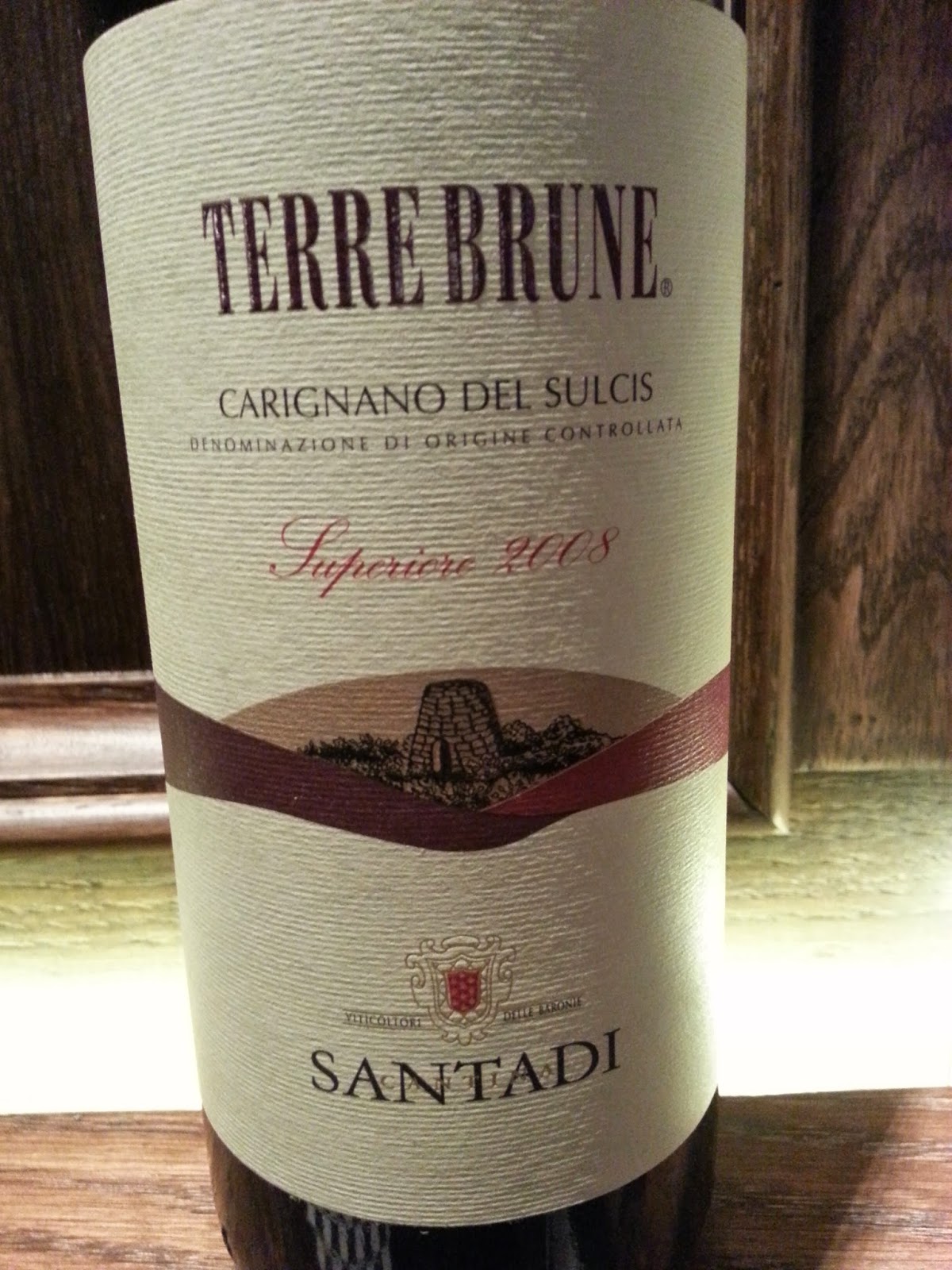 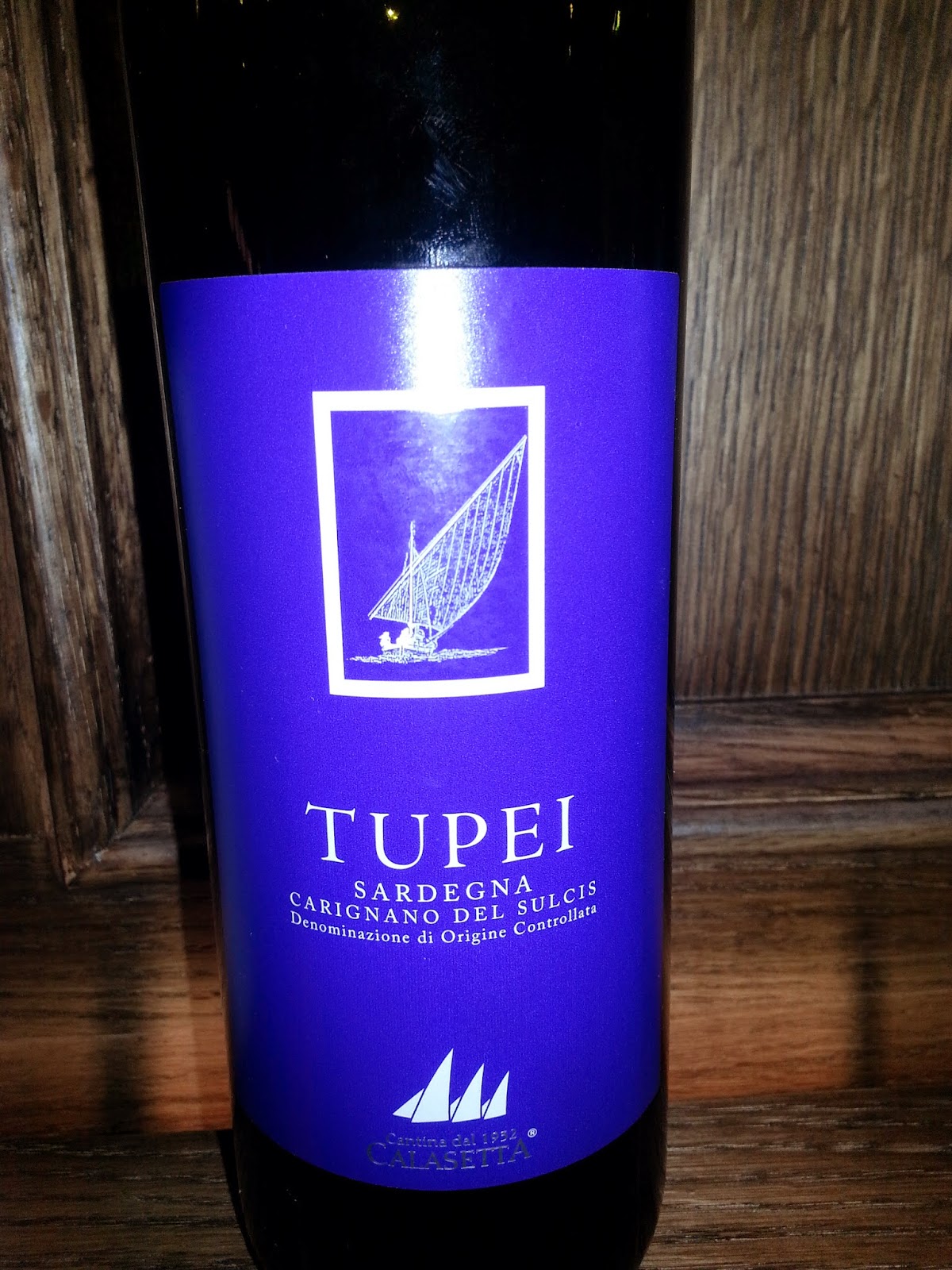 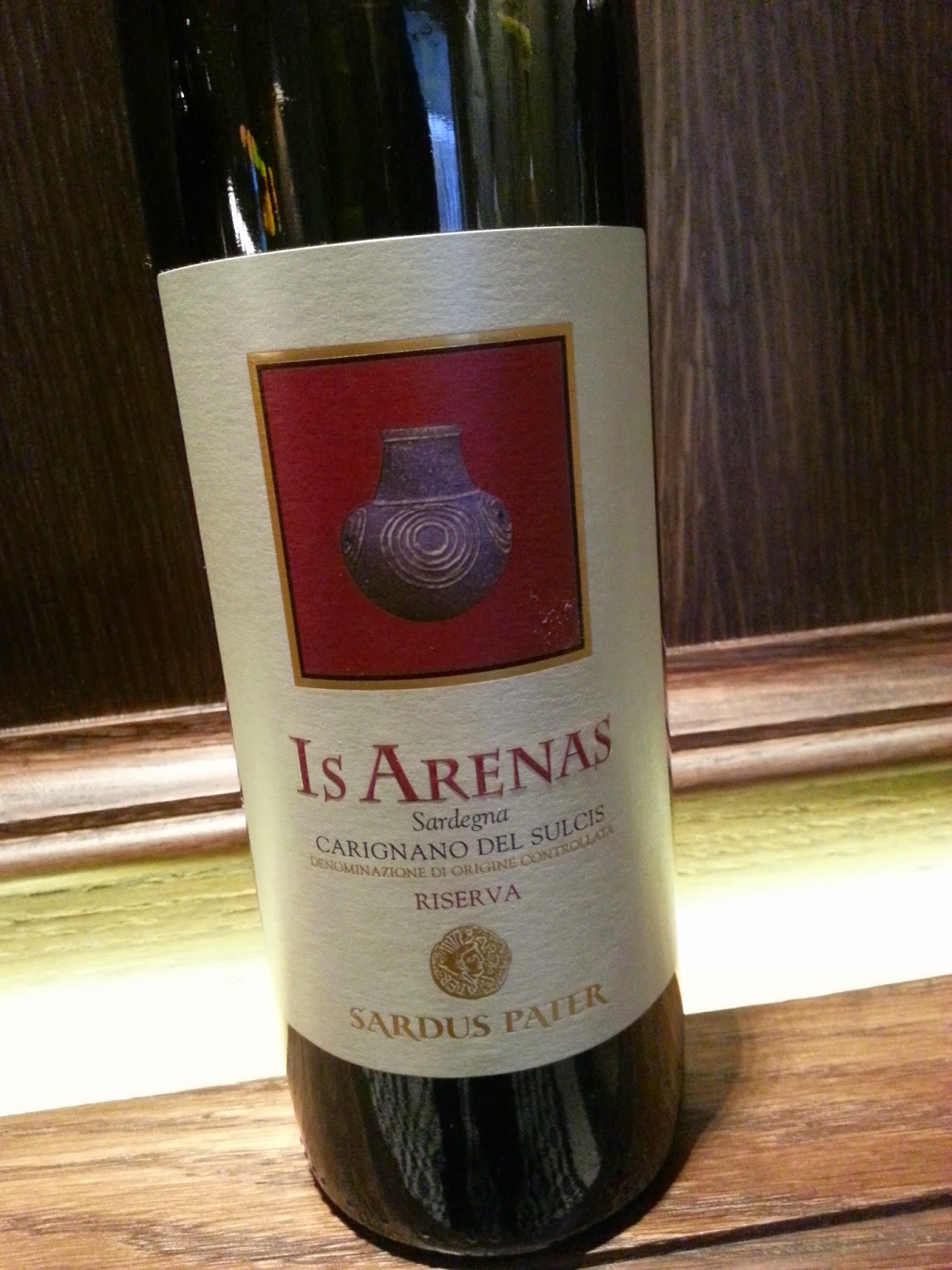 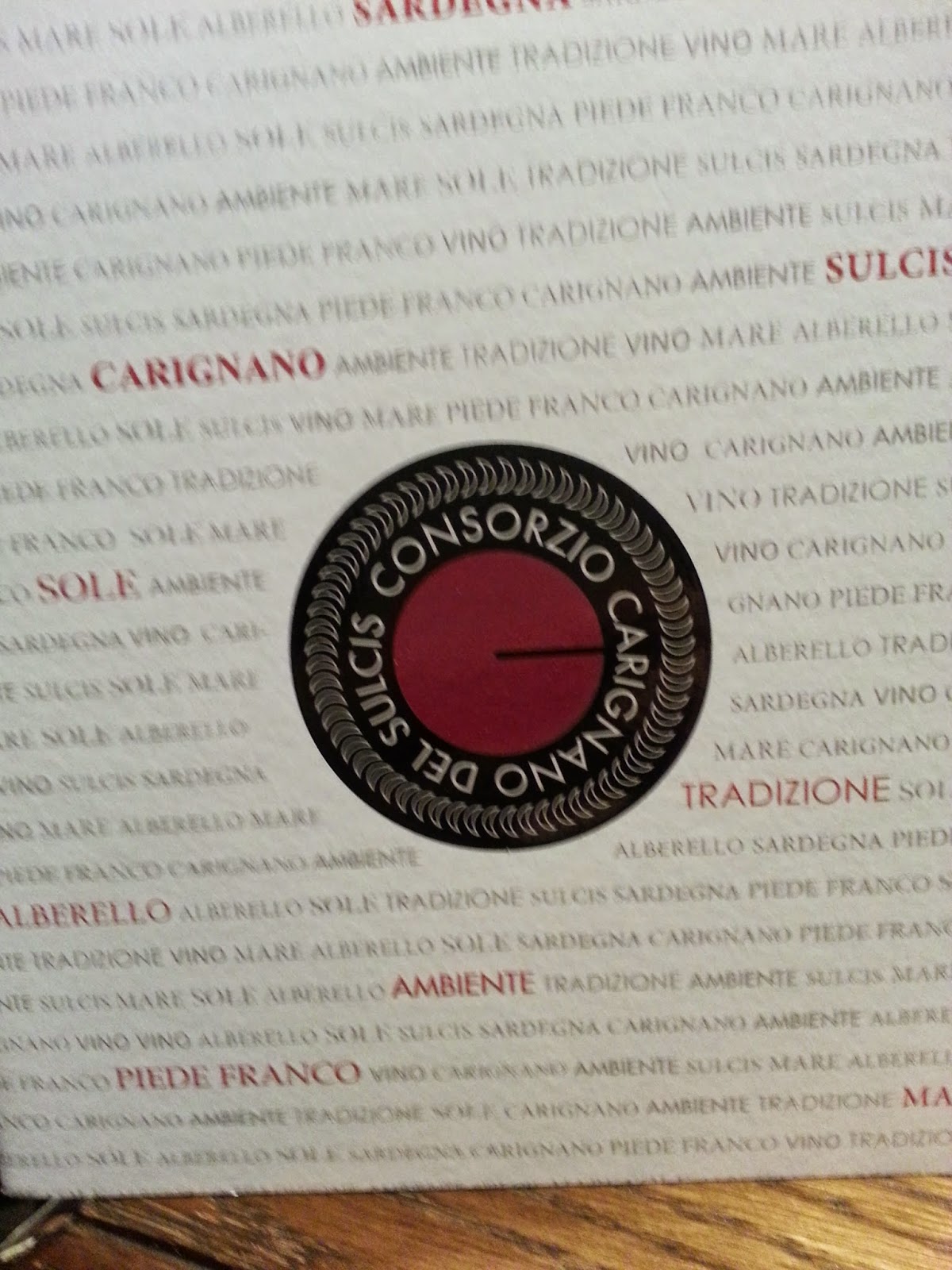 Posted by Dwight the Connoisseur at 9:42 PM