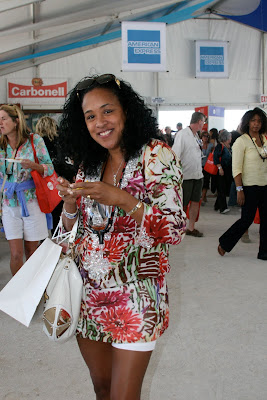 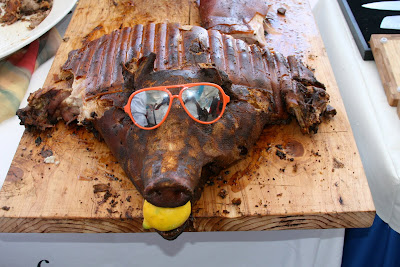 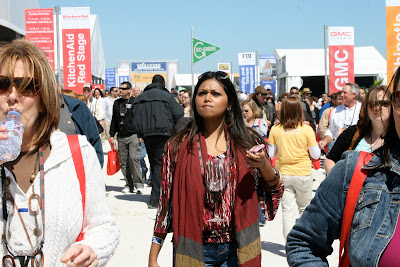 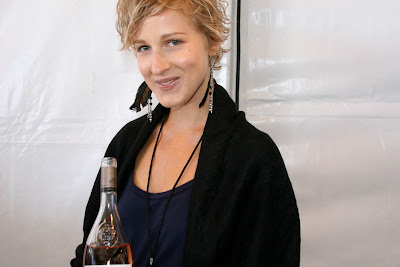 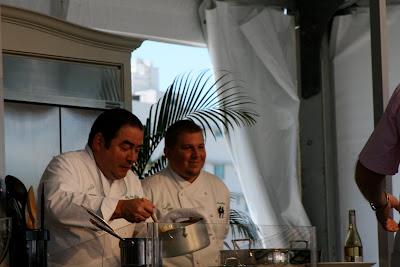 BAM! Emeril Lagasse added the verbal exclamation point to one of his signature recipes at a cooking demonstration cheered by thousands on the outdoor Kitchenaid Stage at the very entrance of the ninth annual Food Network South Beach Wine & Food Festival.

More than a hundred thousand foodies and wine connoisseurs crowded at the opening gate for the two day gourmet extravaganza like crowds waiting for the rushing of the bulls at Pamplona. Souvenir Waterford Crystal glassware in hand and orange goodie bags at their side, they were set to sample the best of Miami’s and the nation’s top chefs and wine and spirits offerings from the leading wine and beverage makers of the world.

Daniel Server of The Grill on the Alley, Aventura, Florida was one of the 60 chefs and restaurants that stirred, chopped, Chipotle’d and sautéed for enough greedy gourmands to fill a Super Bowl Stadium. “We wanted to do sort a Surf ‘n Turf ceviche. So, we’ve got a little bit of smoked rock shrimp, beef tenderloin and Aji Amarillo, a type of Peruvian yellow chili. When we decided to do the event, we thought it was going to be really hot, so we thought a nice, cool ceviche would work. The beef gives it a nice, rich flavor that will go with the wines. It’s South Florida, so you’ve got to have some (Latin) ceviche going on. The rock shrimp are native to Florida, so we thought it would be something nice to do to give it a local glair!”

France was well represented with the French Ambassador to the United States, the Honorable Pierre Vimont, presiding over the ribbon cutting, which opened the three-day festival. Ross Wasserman represents the wines of the Loire Valley in France. “We’re a range of Loire Valley wines. It’s a very large region with very diverse climates and terroir. We have Muscadet from the coastal area around Nance; we have Sancerre, which is Sauvignon Blance, from the birthplace of Sauvignon Blanc, which is a definitive Sauvignon Blanc. We have Vouvray, which is Chenin Blanc from the Turin region. A then we have two reds. We have a red Sancerre. Sancerre is best known for its white wine, but they also make an excellent red. We have Chignon, which is an unblended Cabernet Franc and finally, we have an off-dry Haut Medoc. We basically, have a wine here for every dish that is being served. They’re very food-friendly wines that are not oaked. Oak tends to make wine very heavy and these are very light. For ceviches and any of the shellfish they are serving, the Sancerre and the Puilly Fume would be perfect. For the richer foods, like crab or lobster or grilled meals, the reds would be perfect. The reds would also go perfect with grilled salmon.”

There was more food than could possibly be eaten in a single afternoon. To top things off, volunteers were passing out samples of desserts, spices, coffees and condiments to take home. Barilla pasta handed out packets of its signature pasta sauces. Bertolli olive oil gave out a really handy plastic cutting board that was lightweight and versatile and colorful as well.
Paula Deen passed out samples of her new line of frozen entrees and Southern-inspired side dishes, due in grocery stores in the Spring. She got the catfish just right. Now for a power walk on the beach for the mile and a half trek home!

Posted by Dwight the Connoisseur at 4:14 PM