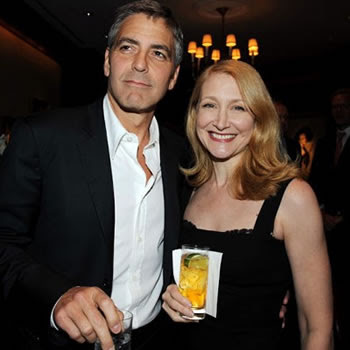 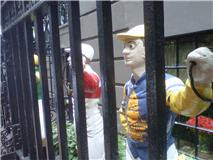 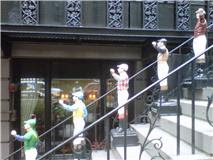 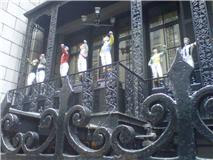 Story and photos #3-5 by Dwight Casimere

1-the main Bar and Dining Salon with legendary ceiling 'decor'

3-5-the famed 'jockeys' greet diners outside the restaurant

New York City-The last time I had lunch at ‘21’ was in 1981. I was in the company of the esteemed CBS correspondent Ed Bradley, who had just been named part of the 60 Minutes team. The luncheon meeting had been arranged months earlier through a mutual friend in Chicago, only now, it turned out to be a celebratory occasion. How fitting that we were lunching at ‘21’’.

Since that time, the restaurant has gone through several facelifts and a host of restaurant changes. Some things remain the same. It is still ‘the’ place to have a special lunch or dinner. The signature décor; from the multi-colored jockeys that line the staircase and wrought iron balcony and the bric-a-brac that hangs from the ceiling in the main dining salon, all remain the same. Its still a favored spot for celebrity watching, especially during lunch, and the ‘21’ Burger served on that scrumptious Parker House bun, is still one of the best to be had anywhere. What has stepped up has been the level of cuisine, which diners visiting New York can experience at extremely affordable prices as ‘21’ continues New York’s famed Summer Restaurant Week values through October 31st. It’s an opportunity to sample a rotating selection of specials from the restaurants menu at near-bargain prices. Luncheon is $24.07 and Dinner $35.00 pre fixe for a three-course meal, beverage, tax and tip not included. The restaurants encyclopedic Grand Award winning wine list features over 125 selections under $60.

The affable wine steward, dressed regally in formal morning coat and white tie, presented the leather-bound wine list with a flourish. Wine Spectator Magazine recently honored ‘21’ with its highest award, the Grand Award in 2010, making the restaurant one of a handful in New York and indeed the nation, to receive the award on multiple occasions, in the case of ‘21’, consecutively from 2003-2010. The award is given to those restaurants that show “an uncompromising passionate devotion to quality….exceptional harmony with the menu, superior organization and presentation and 1,250 or more selections. The ‘21’ wine list has just been updated July 19, 2010.

’21’ dazzles on all counts. I was impressed by the wine list and the quality of the food. The atmosphere was convivial and didn’t at all feel contrived. In fact, the place was packed, going through two complete seatings while I was there. There was a good mix of locals and out of towners and a number of parties celebrating birthdays and business ventures. One man, an obvious local known to all of the seasoned waiters, sat oblivious to it all, reading his paper and sucking silently on his martini, as he awaited his steak dinner.

The service was seamless and unobtrusive. Not once did I feel rushed. Bread and water were replenished without asking and the dishes arrived swiftly. Fresh Malpeque oysters arrived in all their pristine glory. Malpeque’s are hard to find and a connoisseur’s delight because they have a sweet-sour characteristic that makes them irresistible. I eschewed the accompanying horseradish, lemon and cocktail sauce and chose to slather them down with only their sweet/briny natural juice. A glass of non-vintage Laurent-Perrier Brut got things rolling in dandy fashion. The slight mineral and toast aftertaste of the champagne melded perfectly with the sea-salt and foam flavor of the succulent pillows of oyster flesh.

One cannot visit ‘21’ and not have the signature “Speakeasy” Steak Tartare. Executive Chef John Greeley has been careful to update the menu while still preserving well-loved ‘21’ Classics. I’m so happy he decided to keep this one. It was exquisite.

A second course of perfectly cooked sautéed Dover Sole with a simple lemon –brown butter sauce was served tableside, the delicate flesh expertly extracted from the spiny skeleton by the waiter, using only a spook and fork. It was a masterful performance to behold! The wine steward suggested a crisp French Pouilly-Fuisse “Gilles Morat” from Domaine Chataignerale-Laborier, which, the steward explained, had recently undergone a change in name and label. He assured me that the quality of the wine was the same as ever. True to his word, it was superb, especially accompanied by the tender, perfectly cooked sole.

Although I was thoroughly satiated by the Dover Sole, I forged ahead with a main course of 21 Day Dry Aged Sirloin served with morel mushrooms (my passionate favorite), asparagus and grilled sweet onions all in a bordelaise reduction. The waiter suggested a side order of another ‘21’ signature Classic, the French Fries, which arrive here like crispy, air-puffed pillows devoid of any sign of cooking oil and light as a feather. They made for a delightful flavor and texture experience and prompted a cry for seconds. A half bottle of an old stand-by, Stags Leap Wine Cellars “Fay” Vineyard Cabernet 2006, sounded the correct grace note to a symphony of flavors.

The waiter sent word that Chef Greeley would be sending a surprise for dessert, which turned out to be a sampling of all of the night’s featured offerings. I can’t decide which I liked better. It was a toss-up between the Vanilla Crème Brulee and Milk Chocolate Tart. Had I room, I would have asked for another round so I could make a definitive decision!

My ‘21’ experience didn’t end with the meal. As I freshened up in the men’s room before heading home, the friendly restroom steward handed me a fresh towel and offered a splash of cologne, a mint and a warm smile. I walked into the summer night with the feeling that I had dined in the shadow of legends and had been treated as one of their equals.

Posted by Dwight the Connoisseur at 8:43 PM