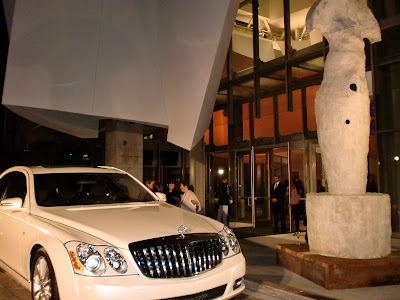 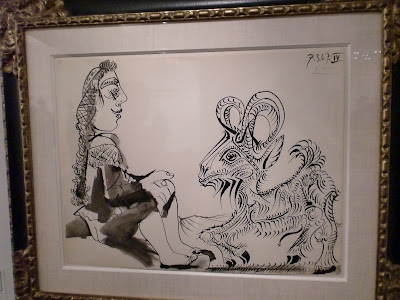 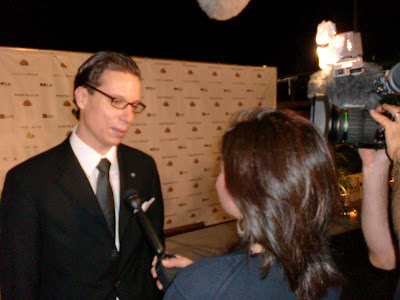 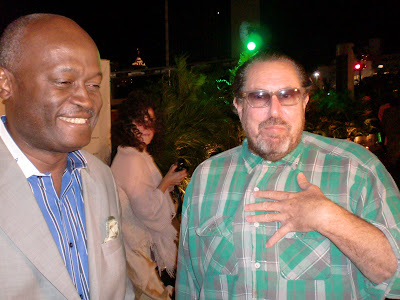 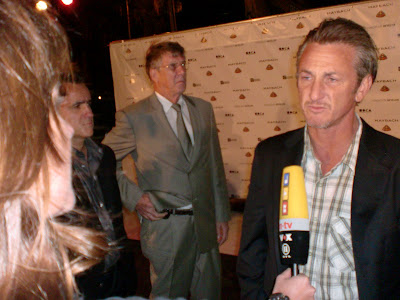 1. The 2011 Maybach juxtaposed with Julian Schnabel's "Queenqueq--The Maybach Sculpture" at Art Basel in South Beach, Miami
2. A Picasso etching valued at $1.9 MIL from Landau Fine Art at Art Basel
3. Patrick Marinoff, Global Brand Manager of Maybach speaks with the media
4. Sculptor and film director Julian Schnabel speaks about his work with actor Nkolo Jean-Victor
5. An exhausted Sean Penn speaks with the German media after a late-night flight from Haiti to Miami

Miami Beach—Art Basel Miami 2010 was a heady cocktail mix of Champagne, celebrities, high-rolling art curators and a dash of bitter reality thrown in for good measure. From exhibitors, pitching everything from million dollar Picasso’s and time shares in private jets to one of the biggest names in Hollywood pleading the cause for Haitian relief, Art Basel covered the gamut, from glam to gloom, all played out against the backdrop of America’s most celestially beautiful city.

The hottest ticket in town was for Maybach Night for Haiti, benefiting Oscar-winning actor Sean Penn’s J/P HRO (J/P Haitian Relief Organisation) Foundation. The world-famous actor flew in from Haiti moments before the event at Miami Beach’s dazzling New World Symphony campus and auditorium, designed by exalted architect Frank Gehry, who famously designed the Guggenheim Museum in New York 50 years ago. The blaze of construction torches could be seen in the background as an exhausted Penn pleaded passionately for money and resources to be directed toward Haiti. Penn had also acted as an observer during Haiti’s recent tumultuous national election.

Maybach enabled the benefit with the support of the Beyeler Foundation and Museum of Contemporary Art Los Angeles. The proceeds will go toward rapid and effective aid for Haiti and support of a village of 50,000 people.

“The devastation is mounting daily and its just getting worse the longer people try to ignore it. We’re looking at an impact that is now far worse than anything caused by any natural disaster. People are dying of cholera every day and the government and every citizen needs to wake up and recognize the need to pour money and resources into Haiti.”

Presented by Maybach, the Stuttgart, Germany-based luxury automobile manufacturer, the evening featured not only a showing of the world’s most expensive car, the Maybach, but the unveiling of a massive sculpture by renowned painter, sculptor and filmmaker Julian Schnabel in the world premiere of “Queenqueq—The Maybach Sculpture” at Art Basel. The evening marked the kick off of a two-year partnership between Maybach and the artist.

A contingency of reporters from the German press was on hand to cover the event. Participants were interviewed in both German and English languages, with the help of interpreters, for broadcast in the U.S. and in Germany.

Schnabel’s sculpture towers nearly 20 feet into the air. It weighs nearly two tons. Juxtaposed against the sleek lines of the Maybach, it is an imposing sight.

Patrick Marinoff, Global Brand Manager of Maybach, characterized the genesis of the evening as growing out of a deep personal relationship between the artist and the actor. “Sean and Julian have been close friends for a very long time, and they’ve talked often about ways that they can combine the resources of both of their artistic capabilities and their standing in the world artistic community to enrich a humanitarian cause. As you may know, both were among those in advance of the celebrity tidal wave in support of Haiti.

“This seemed like a natural partnership for Maybach. The cooperation between Julian and Maybach is also significant because it is based on our shared principles. It also marks the first engagement on behalf of a brand within Julian’s brilliant career.”

Preceding the celebrity-studded reception, guests viewed a film directed by Schnabel entitled MIRAL, which opens in the United States March 25, 2011. MIRAL tells the story of a young girl growing up in a landscape of conflict. Schnabel also presented a short film documenting the Maybach brand and its long-term partnerships in artistic and humanitarian causes.

As of 2011, Maybach is also the first and exclusive automotive partner of the world famous Louvre Museum in Paris, supporting contemporary art installations beneath the I.M. Pei glass pyramid. The pyramid will feature a rotating series of artwork by internationally known, Maybach supported contemporary artists and sculptors.

The evening culminated in a champagne dinner and auction of Schnabel’s artwork inside the dazzling confines of the New World Symphony to benefit Penn’s organization for Haitian relief.

Posted by Dwight the Connoisseur at 1:54 PM