Cantinetta Piero and Hotel Luca: The road to Tuscany winds through Napa Valley 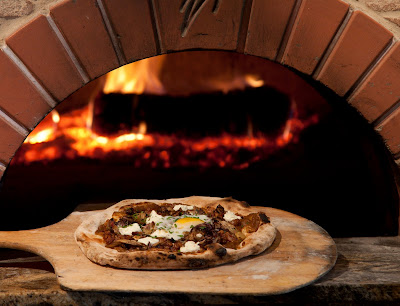 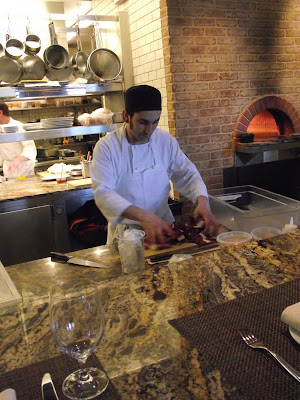 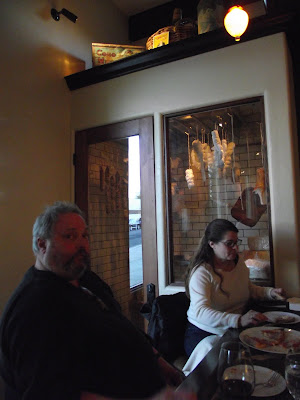 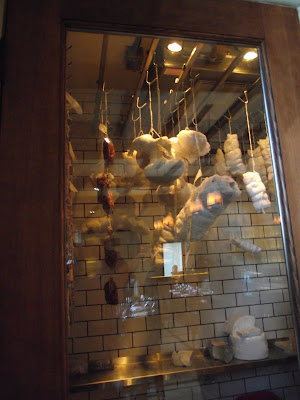 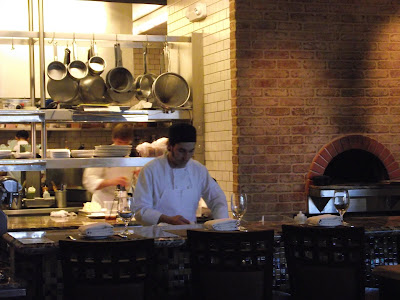 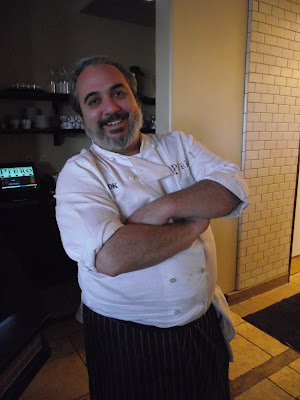 Napa Valley—Cantinetta Piero restaurant in Hotel Luca is one of those off-the-beaten path finds that will have you scratching your head and wondering if you hadn’t entered some kind of time and space warp and landed in the heart of Tuscany. The hotel and restaurant, although relatively new boasts 200 year old Italian roof tiles and 300 year old Italian courtyard floor tiles as part of its construction, and the kitchen, ably headed by master Chef de Cuisine Craig di Fonzo, is an alchemist’s laboratory where local fresh produce, meats and seafood are transformed into tastes and smells that conjure up daydreams of basking in fields of fresh rosemary under the Tuscan sun.

I knew I was in Roman heaven when I noticed the wood burning brick oven and proceeded to find freshly braised octopus with house made Calabrese sausage and toasted couscous as a starter, a variation of a dish I had not experienced since my last sojourn to the region to attend VinItaly wine expo in nearby Verona. “The octopus are special ones that I import from Italy,” Chef di Fonzo told me in a later interview. “They’re slow braised in Muscadine grape juice and then served with toasted Italian couscous.” Italian Prosecco (I guess that was redundant), Non-Vintage by Villa Sandi ($12.99) had just the right combination of bright fruit and an elegant finish that allowed the rich flavors of the octopus and the slight nutty flavor of the couscous to shine through.

A second Antipasti of Cozze al Forno, pristinely fresh mussels, roasted in the aforementioned brick oven, with white wine, garlic, parsley and a smattering of chili was a perfect melding of texture and flavor. The silky mussels with the whiff of fresh sea air and smoke lingering over the rich broth were just the right consistency for sopping with crusty, house made Italian bread. I was tempted to cry Abbondanza! (Enough), but the promise of scaling further culinary heights proved too tempting.

The remainder of the meal with its accompanying wines from the restaurant’s expansive yet focused list of Napa Valley and Italian vintages, was a tour de force of the art of the chef.

Next came a true marvel, a Chef’s Selection of house made and imported Salume, aged meats, which could be seen hanging in a specially constructed glass enclosed aging locker which dominated the wall on the southern end of the elegant restaurant. I was most intrigued by the Wild Boar, which was locally sourced and the Speck, imported from Sudtirol, Italy and Prosciutto imported from San Daniele, Italy. Black Stallion Napa Valley 2009 Chardonnay ($38), with its layered aromas of citrus blossom, white chocolate and flavor notes of toasted almonds and apricot, was the perfect accompaniment to the rich, full bodied flavor of the meats. The wine, from the nearby Oak Knoll District, is a perfect example of the elegant, well-balanced Chardonnays that make the Napa Valley world famous.

The Gran Vino pan roasted Whole Fish was the specialty of the day and arrived in the pan with Tuscan Kale, roasted beets and baby carrots. Sonoma Duck Breast, roasted in the brick oven, was bathed in sour Amarena cherry reduction with caramelized Jerusalem artichokes and carrots simmered in orange juice, then pureed. Groth Napa Valley Pinot Noir 2009 ($29.99) has the type of subtlety and perfume that lets the wine, and the accompanying food, speak for themselves. The aroma and complexity allows the flavors of pure raspberry, bitter cherry and a touch of red licorice to shine beyond the silky, lush finish. There was a bit of creaminess on the palate that worked well with the slightly gamey Sonoma duck.

I was quite full after the copious main dishes, but couldn’t resist diving into one of Chef di Fonzo’s creations, Chocolate Budino, a Sicilian bread pudding made with fresh shaved and melted chocolate, house made caramel and Sicilian sea salt, topped with whipped crème fraiche. I could have used a room at the intimate Hotel Luca, but they were all booked for the weekend. Next time!

Posted by Dwight the Connoisseur at 5:22 PM