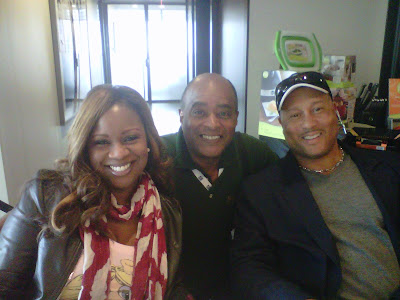 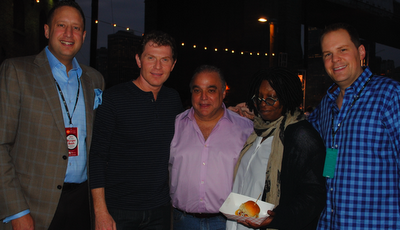 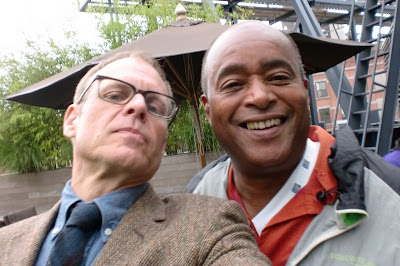 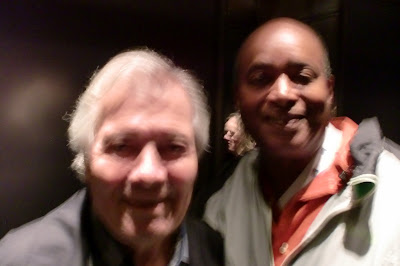 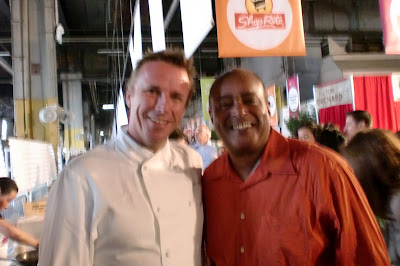 1. Pat and Gina Neely with Dwight The Wine Doctor

3. Iron Chef’s Alton Brown hams it up in the Kohls Rooftop Hospitality Lounge

6. Chopped Judge Marc Murphy with Dwight The Wine Doctor at the Grand Tasting

NEW YORK---“It’s New York ‘WINE’ and food festival” a member of the PR team corrected a young freelance writer who had incorrectly labeled the title in an article on the 2011 Food Network New York City Wine & Food Festival held all over New York’s meatpacking district in lower Manhattan. The exchange in the Festival Rooftop Hospitality sponsored by Kohl’s underscored the preeminence of wine in the four day event that brought together a record crowd of foodies and wine enthusiasts to taste, learn and mingle with Food Network Chefs and program hosts with 100% of the net proceeds benefiting the Food Bank for New York City and Share Our Strength ®.

All of the great wine producers of America and the world were present, pouring in tandem with mouth-watering cuisine prepared on site by scores of New York’s and the nation’s greatest chefs. Exclusive provider of Wine & Spirits to the Festival is Southern Wine & Spirits of America, whose Vice President, Corporate Communications and National Events, Lee Brian Schrager, is the Founder of the New York City Wine & Food Festival.

Celebrity chef sightings were as plentiful as foie gras at festival events. With minutes of my arrival at the Kohl’s Hospitality Suite, I ran into Pat and Gina Neely, popular hosts of Food Network’s Down Home with the Neelys. The two are also co-owners of Neely’s Bar-B-Que in Memphis and have just opened Neely’s BBQ Parlor on the Upper East Side. Their family style Jazz Brunch was the official unveiling of the new establishment at 62nd Street & 1st Avenue with The Neely’s Brunch presented by Tropicana, one of the featured events at the festival. “Our event is completely sold out,” Pat told me over a steaming Lily cappuccino. “I don’t even think I can get some of my family members in, who came along with me to the festival.” The overwhelming response should not be any surprise. The show, filmed in their Memphis home, surrounded by family and friends, airs multiple times throughout the week on Food Network and their first cookbook, “Down Home with the Neelys (Knopf, 2009), quickly earned them a place on the New York Times best-seller list. Their second book, “The Neelys Celebration Cookbook: Down Home Meals for Every Occasion, (also Knopf), is due out in November.

Walking through the Chelsea Market during Thursday night’s event, Bank of American presents Chelsea Market After Dark, I heard a familiar exclamation, “BAM!!” among the din of the techno-rock music emanating from the Macy’s Lounge. It was Emeril Lagasse, in his first appearance at the Festival. Chelsea Market, home to the Food Network, stays open late night in order to serve samplings of the delicacies from its 30 shops and a heady selection of the finest wines & spirits. Working out of his own storefront, Super Nova Chef Emeril, whose new series, The Originals w/Emeril, airs on Thursdays at 10:30pm on Cooking Channel hosted his own Signature Lounge featuring delicious bites and seasonal goodies right out of the pages of his new book “Sizzling Skillets and other one-pot wonders, which he signed for fans.

After tasting delicacies from 30 purveyors at the Chelsea Market, including Bowery Kitchens, The Lobster Place, which had the best clam chowder and lobster bisque I’d ever had and Jacques Torres Chocolates, where I almost o.d.’d on white chocolate overload, and an afternoon of wine tasting at the Beverage Media Trade Tasting at the Grand Tasting Pavilion, plus the heady experience of mingling with some of Food Network and Cooking Channel’s top celebrity chefs, that my appetites were thoroughly satiated.

Posted by Dwight the Connoisseur at 4:36 PM