Brugal 1888 perfect for ringing in the New Year 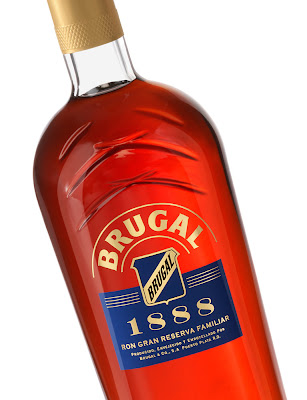 Ring in the New Year with premium spirits

It’s no secret that wine lovers also enjoy premium spirits. After a Christmas Holiday filled with endless Champagne toasts and dinners with a dizzying myriad of wines, indulging in premium spirits such as a single malt scotch or a fine rum or tequila is a nice change of pace. In addition to the sheer joy of appreciating the fine craftsmanship that goes into making a premium spirit, there’s also the sense of adventure that can be created by a skilled mixologist. With a little practice and the right bottle of libation, even an amateur can make any number of flavorful and imaginative drinks that can make toasting the New Year a night to remember.

One of the newest imports in the premium rum category is Brugal 1888 Grand Reserva Rum ($49) from the Dominican Republic. A true expression of great Caribbean rum, Brugal 1888 is double distilled and double aged, giving it a unique, upscale flavor comparable to drinking a fine cognac. Selected from the finest rums, it is skillfully aged first in American white oak for up to eight years, and then matured in European oak casks previously used for aging Sherry for another six to eight years. Master Distiller Don Gustavo Ortega Zeller Brugal is a 5th generation family member, delivering a true expression of the Brugal legacy.

Overall, Brugal is the top-selling rum in the Dominican Republic. Spain has traditionally been its largest foreign market, but as of this fall Brugal has hit American shores with a tsunami of acceptance, particularly in the New York market. Over the past few months, it has been expanding its reach nationwide with a series of promotional events. Brugal 1888 is a new, limited-edition premium beverage that references the year of origin of the family’s rum-making tradition.

Casks used in Brugal 1888 aging aren’t any run-of-the-mill affair. Handpicked or handcrafted under the guidance of George Espe, The Macallan Master of Wood, these special Brugal 1888 casks are arranged horizontally during the aging process in a specially designed cellar. They are grouped together in batches of 68 units, to a maximum of 14,000 bottles. The final blend contains rums that have been aged anywhere from 5 to 14 years. The result is stunning luxury rum that reflects 120 years of blending experience.

With its deep amber color and complex nose of scented bouquets and hints of spice, cinnamon and dried fruit and back notes of chocolate, licorice and roasted coffee, it’s a terrific flavor adventure on its own. Brugal 1888 invites long evenings of sipping by the fire. It’s also great as either an aperitif or after-dinner drink.

Increasingly, premium spirits are finding their way into the mixologist’s lexicon. On the club scene, it’s almost de rigueur as a go-to ingredient for great cocktails. The Old Fashioned is a popular wintertime drink that is a classic. It’s been updated with the introduction of the Rum Old Fashioned. Although usually made with Bourbon or Rye whisky, made with Brugal 1888, it’s sure to become a wintertime favorite and a great way to toast the New Year in style! Here’s the recipe:

In a large cocktail blender pour over ice and combine:

Stir, then strain and pour into a wide-mouthed cocktail or champagne glass

Rub a cut lemon or orange around the rim

Cut a thin slice of lemon or orange rind and curl it around the cocktail stirrer and add to the finished cocktail. Garnish with a maraschino cherry and enjoy!

Posted by Dwight the Connoisseur at 1:50 AM