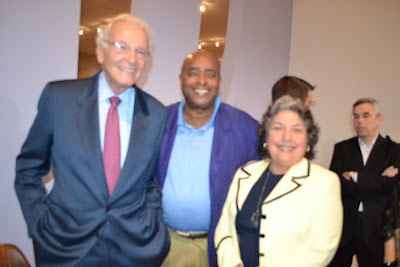 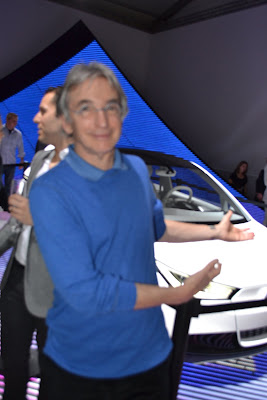 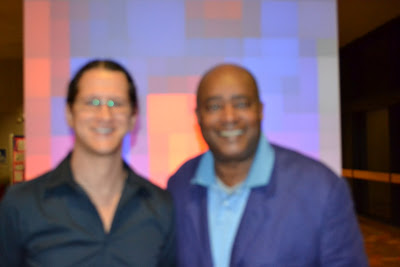 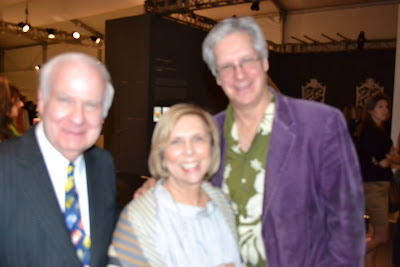 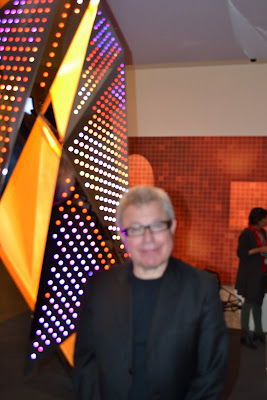 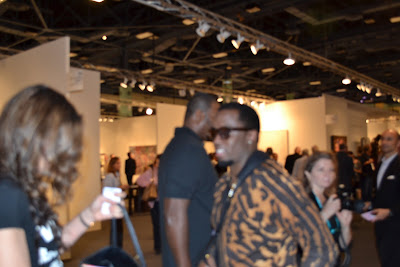 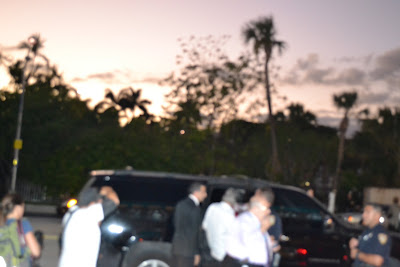 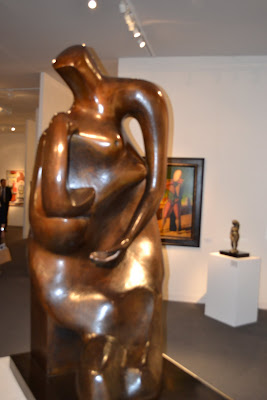 If we are in the midst of a global recession, there’s no sign of it in this sun-drenched paradise of a city that has become one big art gallery for the week. At the Vernissage opening night parties in the Miami Beach Convention Center and the temporary exhibition hall space of the Design Center across the street, artists, well-heeled collectors and art lovers mingled with celebrities and heads of companies pitching luxury cars, jewelry champagne and corporate jets.

Outside the Vernissage party, there was Michael Douglas and wife, Catherine Zeta Jones being muscled by security guards past a phalanx of paparazzi and adoring fans into a waiting Escalade. Over in the Design Center, Maestro Michael Tilson Thomas, head of Miami Beach’s New World Symphony, was drooling over Audi’s Car of the Future at a Veuve Clicquot Champagne reception. At the Fendi lounge, world-renowned artist Christopher Janney was touting his new Interactive Art Installation, Harmonic Convergence that had just been dedicated at Miami International Airport to billionaire collector George Kravis whose Design Collection just got its own pavilion at the Philbrook Museum of Art in Tulsa, Oklahoma.

Sean “Puffy” Combs was getting the VIP treatment at the Art Collector Lounge as the Ruinart Champagne flowed to the tune of $100 a bottle and over at the Culture Club, a “pop-up” gallery hosted by Picnic Magazine and the Mayor of Tel Aviv, Architect Michael Arad, designer of the 9/11 Memorial at the site of the World Trade Center terrorist attack in New York, held forth with a probing discussion of the creative process behind his design.

And, Oh Yes, there’s art! By the container ship load. Huge art pieces have been erected in public spaces, such as parks and vacant lots throughout Miami. Hotel lobbies, poolside cabanas and even entire floors of rooms and suites have been converted into instant art galleries. Even intermodal steel containers, like the very ones used to ship many of the art pieces from overseas by air, ocean and highway, have been similarly turned into “pop-up” galleries. In the chic Design District, once a crumbling aggregate of run down warehouses, a caravan of tricked out Mini Coopers have been turned into moving canvases by local artists and a convoy of mobile homes, cum art galleries, have become the home-away-from-home for a contingent of nomadic outside artists. Miami Beach’s Collins Park has been transformed with a record number of 24 public art works.

No space is left untouched by art. The bland Stephen P. Clark Government Center is now awash with dazzling color thanks to a new installation by visual artist Ivan Toth Depena. The installation, Reflect, was commissioned by the Miami-Dade County’s Art In Public Places. It uses infrared cameras to respond to a visitor’s movements and then creates light-based abstractions from those images in real time. Depena created specially designed software to retain a “memory” of previous user activity to create a constantly evolving artwork that elaborates the ideas of time and memory in space.

Interactive is the operative word at Christopher Janney’s other big project in the Design District, where his gallery has become a showcase of light and sound with the installations “Architecture of the Air” and “Touch My Building.”

Back at the Art Collector Lounge, internationally celebrated design architect Daniel Libeskind of Studio Daniel Libeskind, was holding a news conference with a collection of international art publication journalists on his new masterpiece eL, developed in collaboration with Zumtobel. Libeskind is best known for his dramatic addition to the Royal Ontario Museum in Toronto and the lavish sets he designs for opera, most recently for Deutsche Oper Berlin’s production of Messiaen’s Saint Francis of Assisi.

“eL is new because it affirms the idea that light is not just for ornamentation or effect. It ‘is’ the structure. It becomes an essential design element and redefines its relation to art as a means of conveying emotion,” Libeskind elaborated.

Besides setting records for the value of art sold, this year’s number of both exhibitors and attendees has made the 10th Art Basel Miami Beach the largest ever.

Posted by Dwight the Connoisseur at 7:51 AM