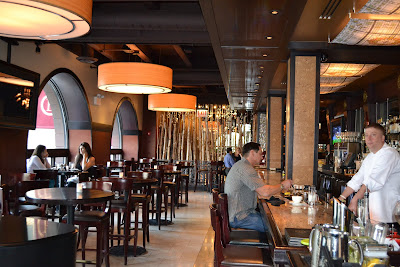 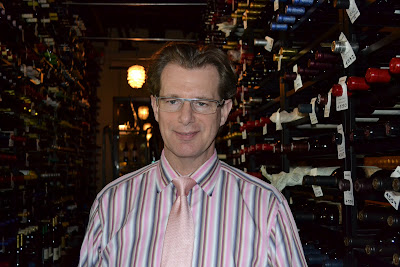 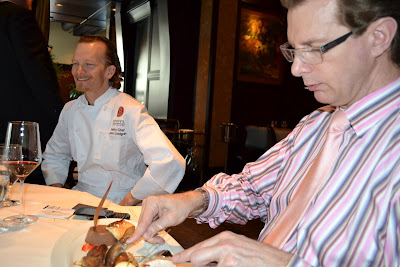 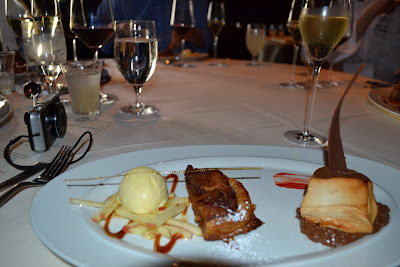 Benny’s Chop House: A cut above

CHICAGO---There must be an aura that descends upon anything located in the shadow of Trump Tower. Sometimes, just walking by the place, I feel awash in wealth, prestige and power. The same feeling must have possessed the creators of Benny’s Chop House, the latest addition to the Windy City’s laundry list of steak houses.

Everything you’d expect to find on the menu of a typical steak house is on the menu at Benny’s. There’s one huge exception; the food that is served, the method of service and the presentation are head and shoulders above anything you have experienced before. The oysters are fresher, the shrimp bigger, the salad crisper and the steaks-more on that later!

A recent sampling of the restaurant’s spring menu revealed that Benny’s has internalized the concept of the Chicago steak house and elevated it to a new and higher level. From the start, steakhouse classics, such as the shrimp cocktail, for example, have been supplanted by something far superior. A seafood sampler included Jumbo Prawns. The term “prawn”, which I learned while residing in Sausalito, on San Francisco Bay, is used to reference ultra-large shrimp that approach the size of South African lobster tails. There’s nothing quite like them. Melted butter served on the side is unnecessary, they have a mouth pleasing texture and buttery taste all their own. The Japanese call the flavor sensation “Umami.” Perhaps that’s where occidentals derived the term “Yummy.”

An accompanying glass of superior Pierre Moncuit Champagne ($28 and Wine Spectator rated 90 points out of a possible 100, with its creamy mouth-feel and crisp notes of peach and Meyer lemons, was the perfect foil. This is what French Champagne is all about, and is a sterling example of the care and discriminating taste that goes into creating Benny’s wine list of some 1300-1500 labels.

A grouping of “Oyster Wednesday” selections highlighted an exotic mix of fresh oysters, which arrive fresh daily from waters far and near. “”We have a roster of outstanding seafood purveyors who fly these in fresh for us everyday,” said

Director of Operations Mitchell Schmieding. A veteran of eighteen years with the eponymous Charlie Trotter, Schmieding brings with him a meticulous sense of style, order and quality. With the opening of the original Charlie Trotter’s at the MGM Grand in Las Vegas to his credit, its no surprise that Benny’s Chop House is well-orchestrated production. In keeping with that ‘dining-as-entertainment’ concept, Benny’s Chop House features a Live Entertainment Schedule with the incomparable International Music Festival winner Greta Pope and Paul Coscino performing in the North Lounge, with a lively repertoire of music from Brazil to Broadway, a complimentary view of the aforementioned Trump Tower is included through the lounge’s arched floor-to-ceiling windows.

I digress. Now, back to the food. A pleasant variation on the traditional steakhouse lettuce wedge arrived in the form of a grilled Romaine Lettuce stalk slathered in a tangy lemon-garlic vinaigrette accompanied by a couple of wooden pizza spatulas covered with crispy flatbreads topped with wild mushrooms and truffles and another with house-made Italian sausage and Bell peppers. I would have been perfectly satisfied if the meal had stopped there. I loved the grilled Romaine; in fact, I tried some on my own on my garden grill. What an imaginative twist!

Next came the piece de resistance and the raison d’etre of Benny’s very existence, the USDA Prime Natural Filet Mignon. Howell Mountain 2006 Cabernet Sauvignon, with its distinctive rich flavor of volcanic mineral soil and deep, bramble, old vines dark berries and smooth tannins underscored the rich mineral flavor of this prime aged steak. I tasted this exquisite wine from the barrel at the recent Premiere Weekend in Napa Valley. This wine is strictly allocated and can be found only at the winery or in the cellars of the most discriminating collectors and a few specialty wine shops. The fact that Benny’s has it on its wine list is further testament to the restaurant’s stature.

According to Schmieding, the restaurant has its own beef production program which ensures that it will always have high-quality USDA Prime Steak, from a reliable source at all times. “The problem with many steak houses is that they have to rely on several suppliers to meet the high demand. That means the steaks may not always be of uniform quality and type. Sometimes what happens is that in party of six each person may wind up having a different steak from an entirely different source. That can make a huge difference in the dining experience that each person will have.”

The steak was served with Home-made Cured Maple Bacon. I have personally sworn off bacon for dietary reasons, but you weren't there to watch me as I devoured every morsel. The Blue Cheese Croquette was a stroke of culinary genius as were the accompanying Tri-Colored Spring Carrots. A nice touch!

Pastry chef Aaron Lundgren provided a fitting postscript to the afternoon, with a poet’s assemble of delicacies, Michigan Apple Pie with fresh Vanilla Bean Cream and my personal favorite, killer Milk Chocolate S’mores with Graham Cracker, a favorite of my daughter’s. She used to cook them over an open fire on the beach in Lake Tahoe. Yes, my mind was transported back to those Halcyon days as I took another sip of Howell Mountain along with a final, heavenly bite of dessert. As I walked past Trump Tower on my way across the Wabash Avenue Bridge, I barely looked toward the imposing structure. I had already experienced the pinnacle of perfection.

Posted by Dwight the Connoisseur at 12:55 PM