NEW YORK--Federico Terenzi was in a joyous mood as he entered the Michelin-starred dining room of A Voce restaurant, Columbus Circle in midtown Manhattan. The previous day, he had been recognized for his skill at winemaking with the Tre Bicchieri award from Gambero Rosso, the famed culinary institute in Rome, for his Morellino di Scansano Madrechiesa Riserva 2010 wine from Tuscany at the Grand Tasting at New York's  Metropolitan Pavilion. In recognition of the honored guest, the Maitre d' seated him at the best seat in the house, facing the sweeping panorama of Columbus Circle and Central Park and the awe-inspiring Midtown skyline. 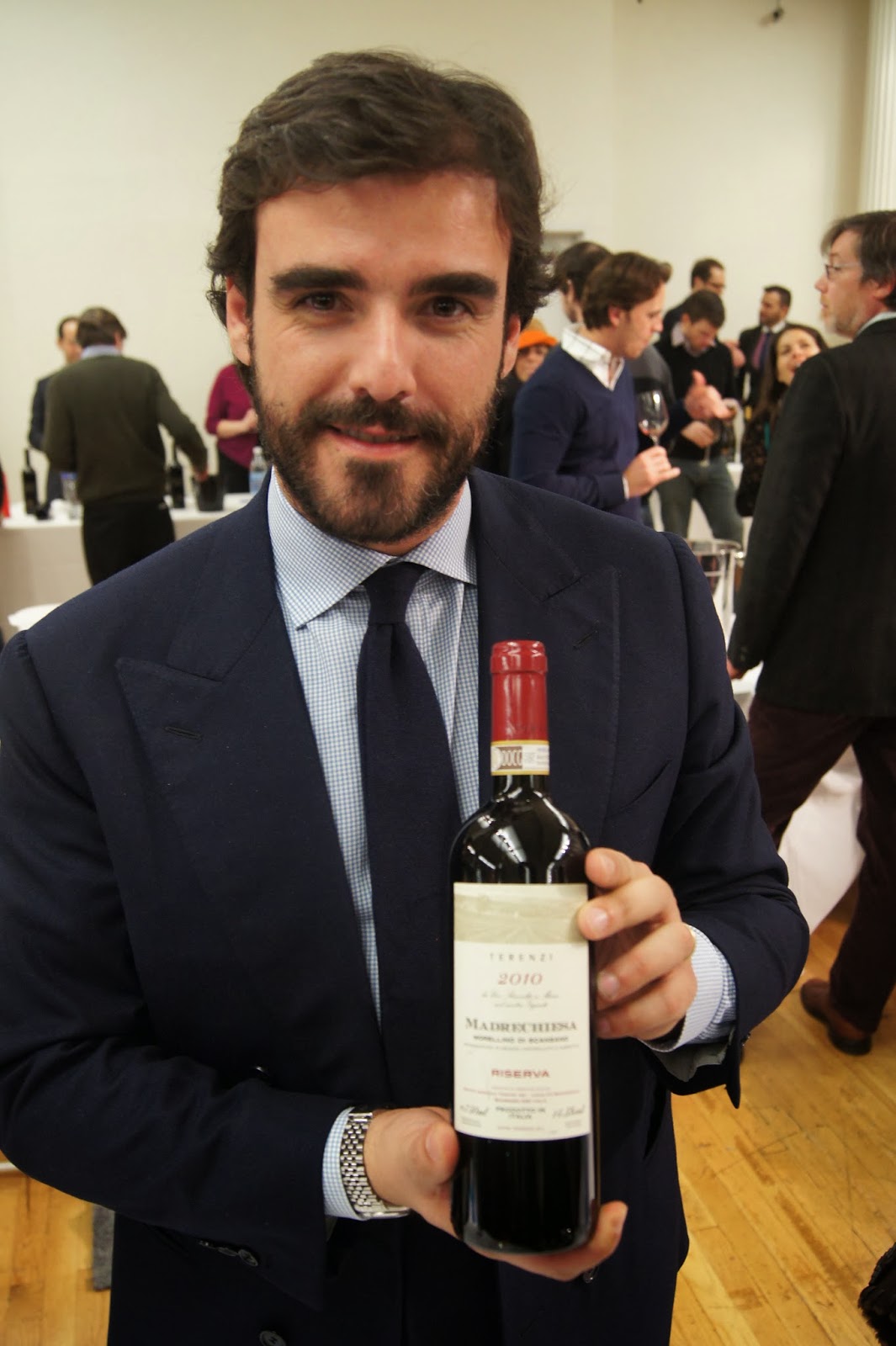 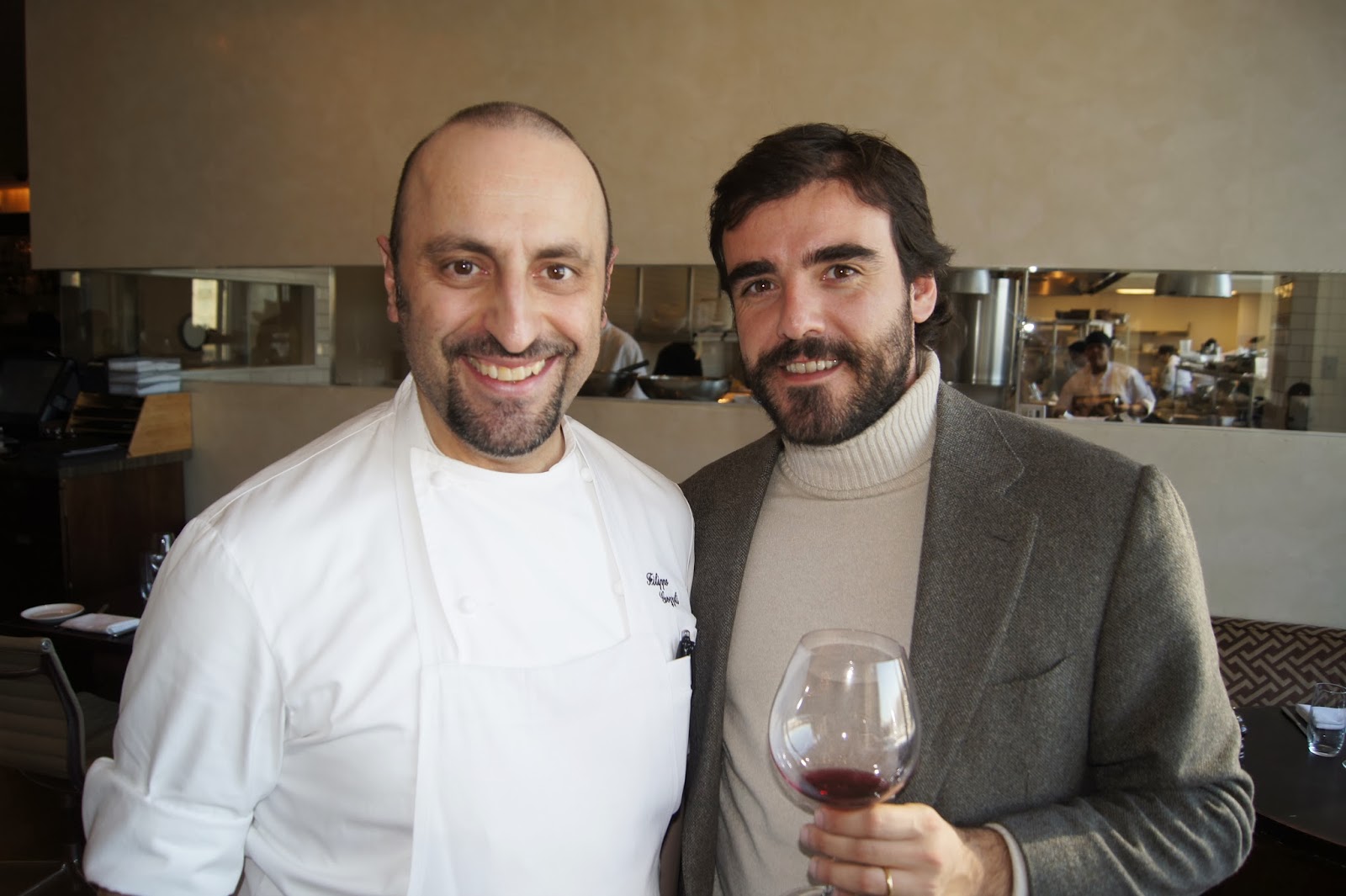 The winemaker with A Voce Executive Chef Filippo Gozolli 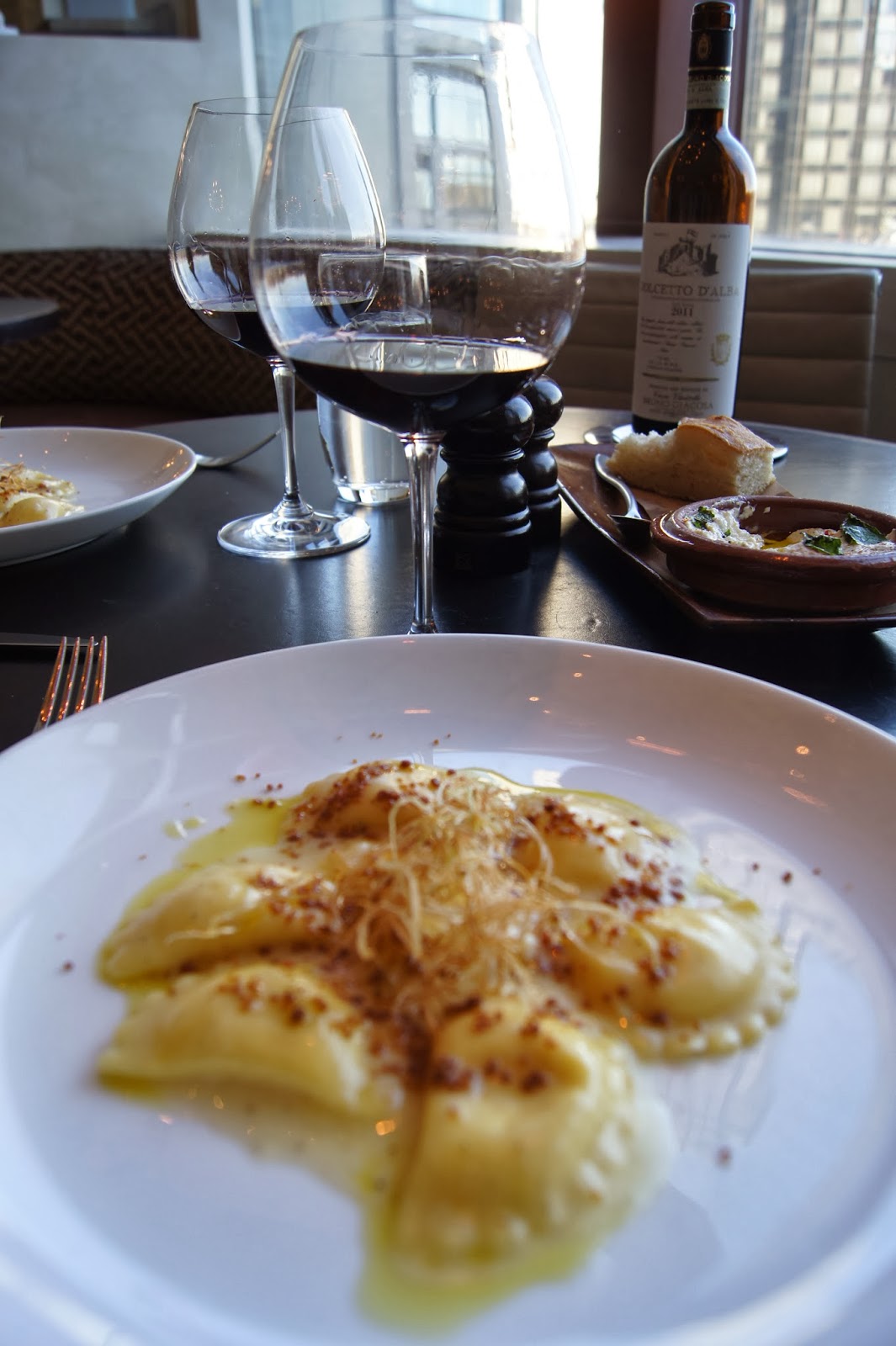 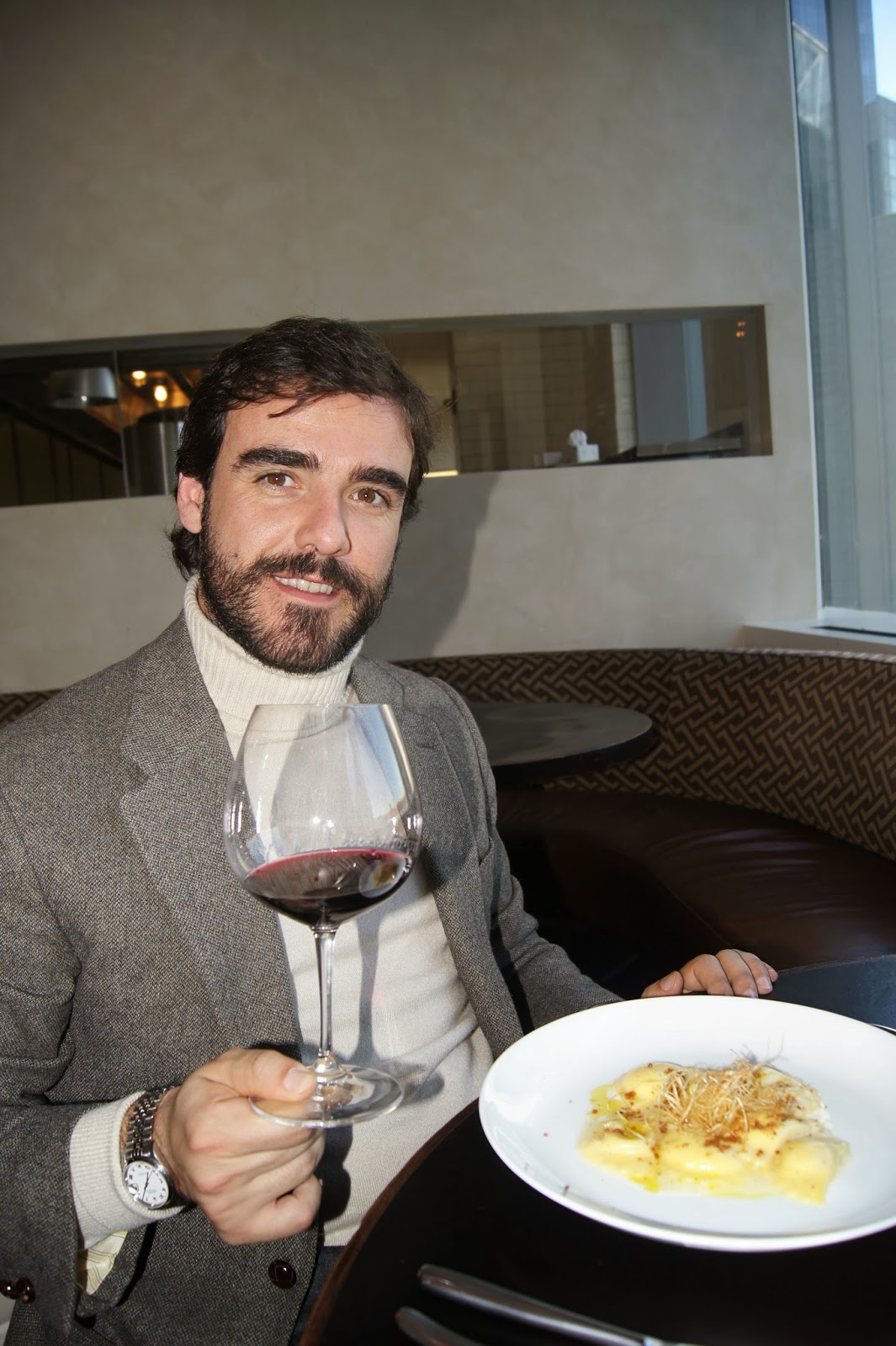 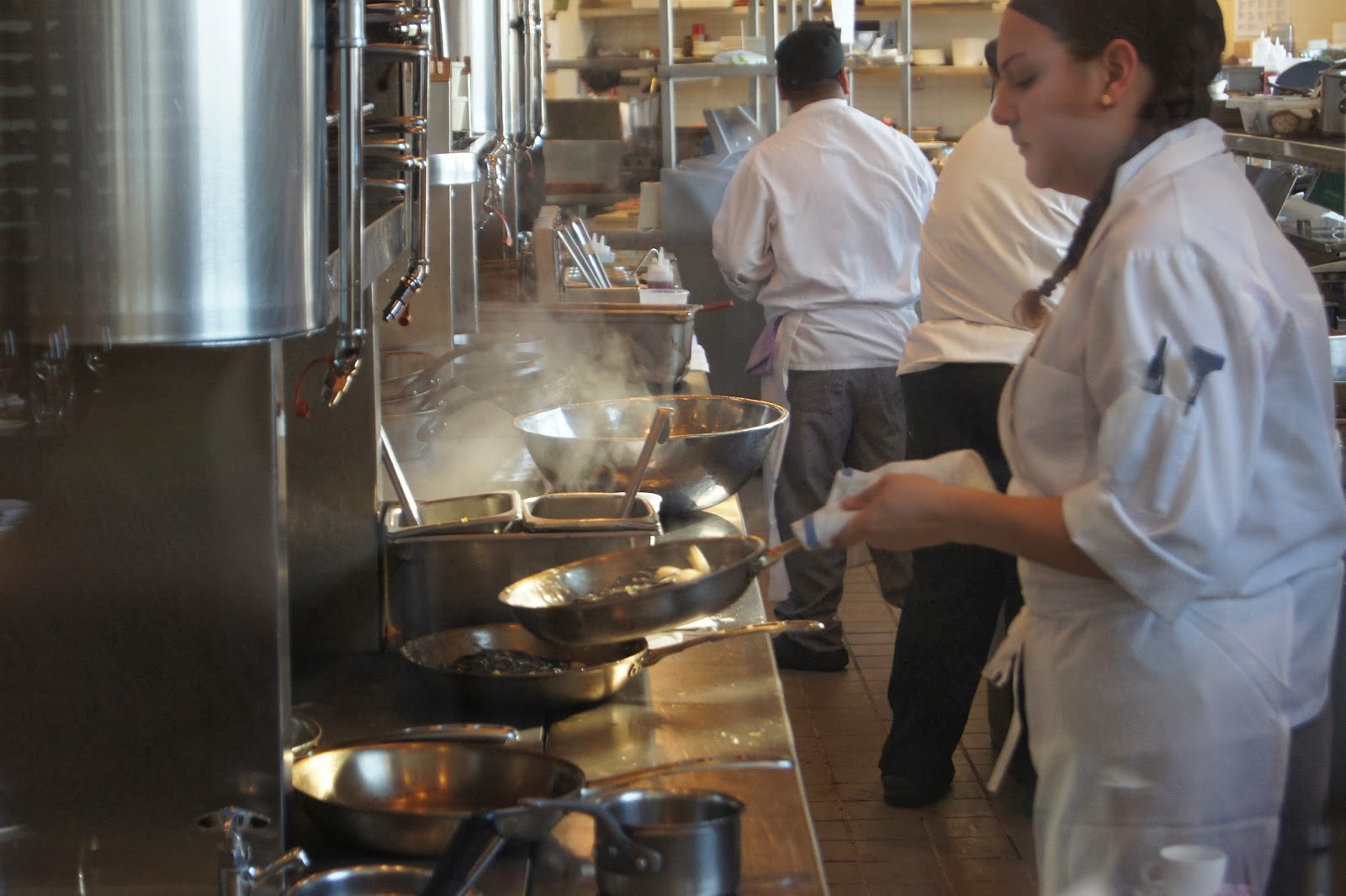 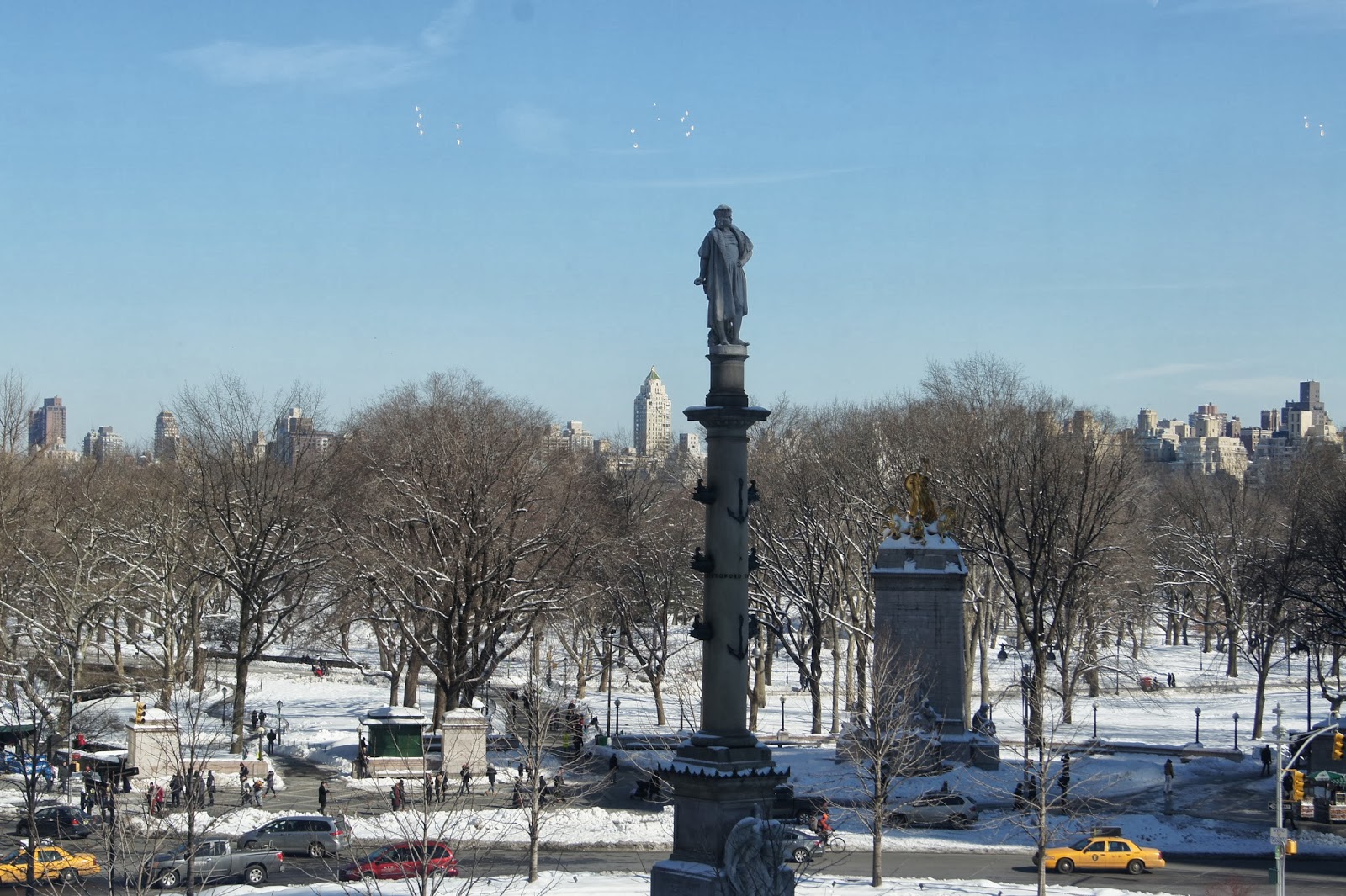 Relaxing over a luncheon  plate of Taleggio-filled Ravioli with toasted leeks  from the special Fashion Week menu.Terenzi reflected on the meaning of the Gambero Rosso recognition for the wine from his beloved district, Morellino di Scansano.

"My family has one of the best known wineries in the region of Scansano, which is in the south of Tuscany, so this is a very great honor, not just for us, but also for the entire region. It is especially so for us here in the United States, where it is not so well known as a region. Most people know the wines of Chianti, for example, but little is known about the Morellino di Scansano. So this is a great opportunity for us to become more well known in the United States and for both of us to grow up together.
The DOCG (official government wine quality designation), is new, so this is our chance to make Morellino di Scansano more well known to American consumers."

Although official recognition for Morellino di Scansano is quite new, Terenzi says the winery itself is quite traditional. "We're a very small winery by American standards, only about 150 acres. The nice thing about being small is that we are very open to anyone who wants to come visit us and to see our operation. Every year, we have about 5,000 people who pass through the winery. We have a small guest house to accommodate overnight guests who want to experience the winery in a very personal way. They get to stay with us and see how we work and the care that we use in every process to reach absolute quality in our wine."

Wine tourism, he says, has become a growing part of his business. "It's one of the best ways that people have been getting to know us in the United States. When they come to visit and taste our wines, the first thing they ask is where can they get them at home. Now, with this recognition from Tre Bicchieri, we will become even more well known and develop many more friends in the United States. It helps us to win more followers, not just for my wine, but for the wines of the entire region of Morellino di Scansano."

Tiramisu with espresso mascarpone was the next and final course, bringing our interview to a conclusion. As a celebratory finale, A Voce Sommelier Marco Fusato brought over a complimentary glass of one of the finest wines from the restaurant's vast cellar, 2006 Cicala Barolo, poured from the bottle with the new Coravin 1000 System, which allows restaurants to pour wine by the glass directly from the bottle without pulling the cork.  This allows restaurants to expand their by-the-glass offerings by providing their guests with unique vertical and horizontal wine tastings and pairings. "No air gets into the wine," Fusato explained, "so we can keep this bottle in our cellar for months, even years, just as we do all of our wines, and there's not one change in its quality or taste. This gives our guests unlimited access to our cellar. We can elevate their dining experience by offering them tastes and single glasses of countless wines from our vast cellar without compromising the wine quality or taste. We can offer tastes of  rare wines, such as this  Barolo, that they would otherwise never expect to see sold by the glass ." It was a fitting end to a stellar afternoon. 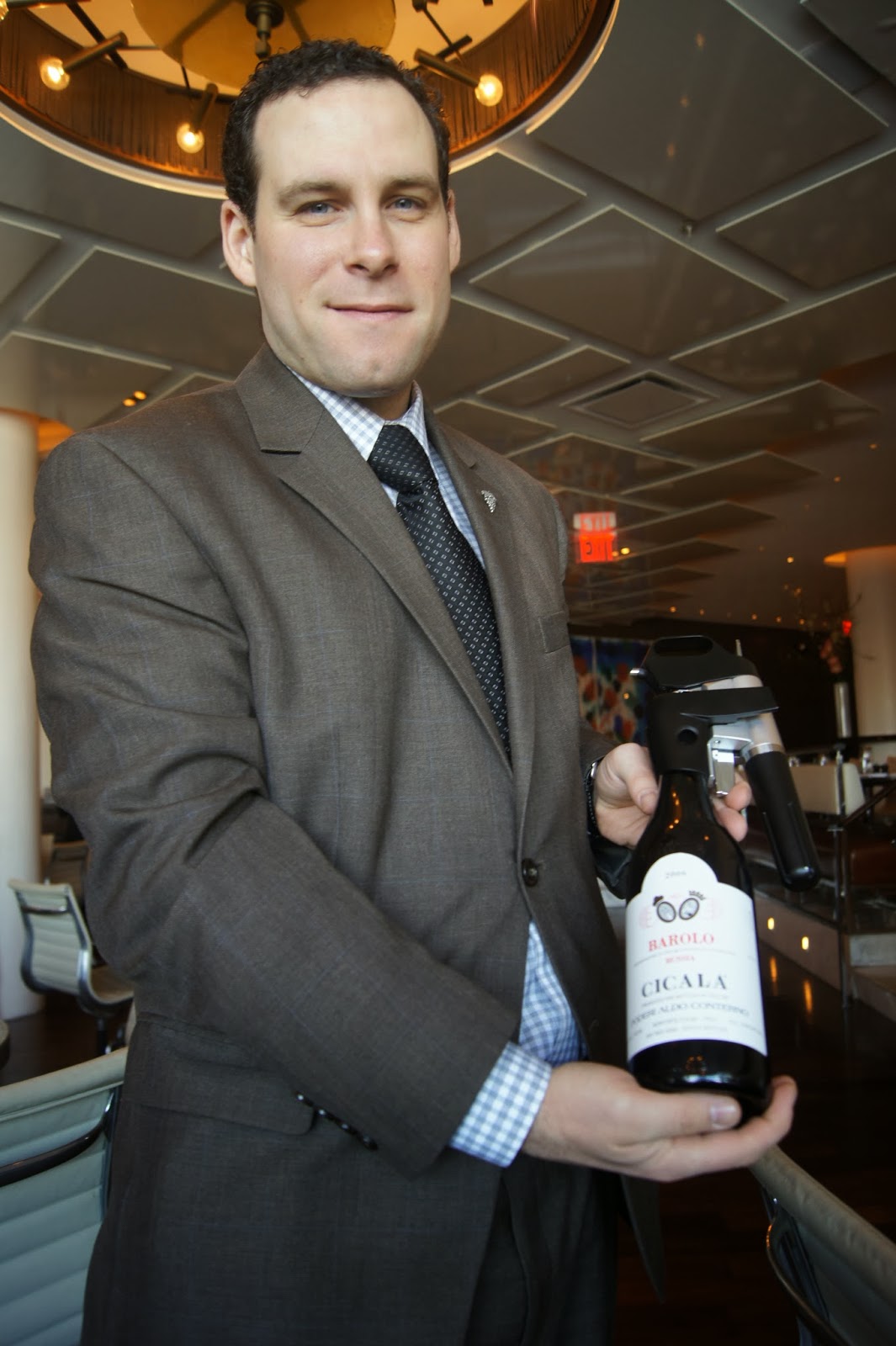 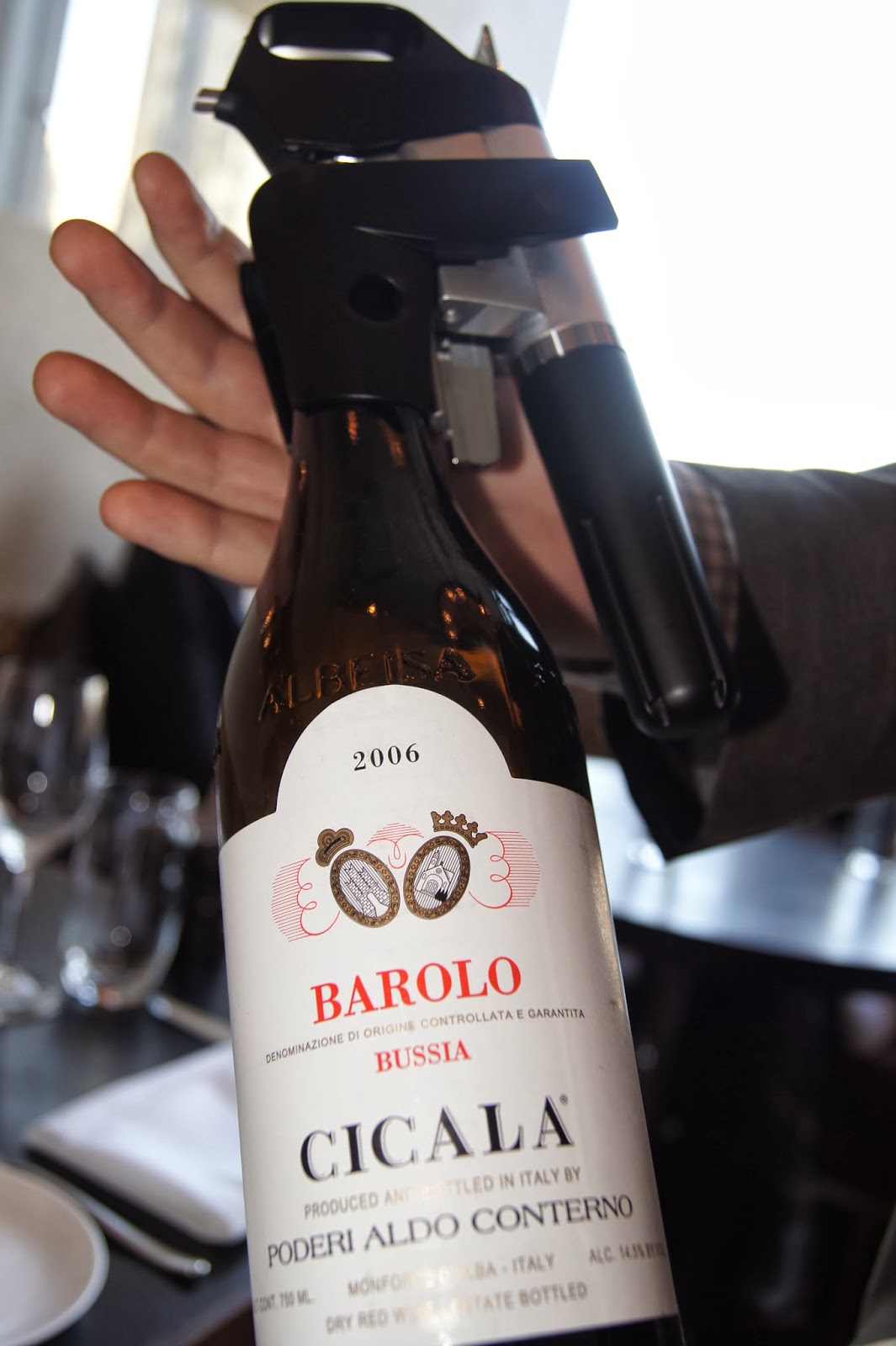 Posted by Dwight the Connoisseur at 8:01 AM