Four Seasons around the world with Rhone Valley Wines 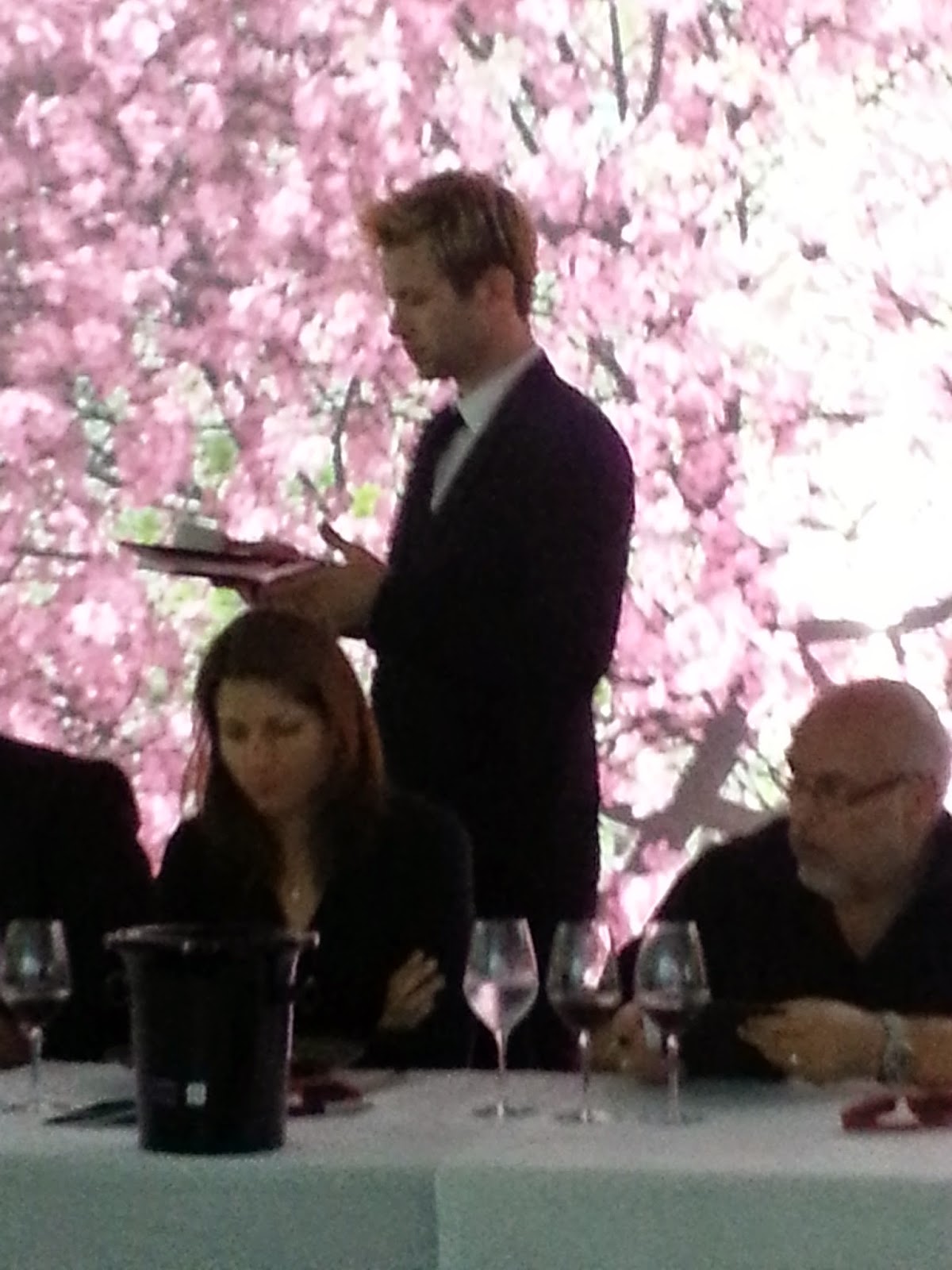 Service among the Cherry Blossoms of Japan/Spring 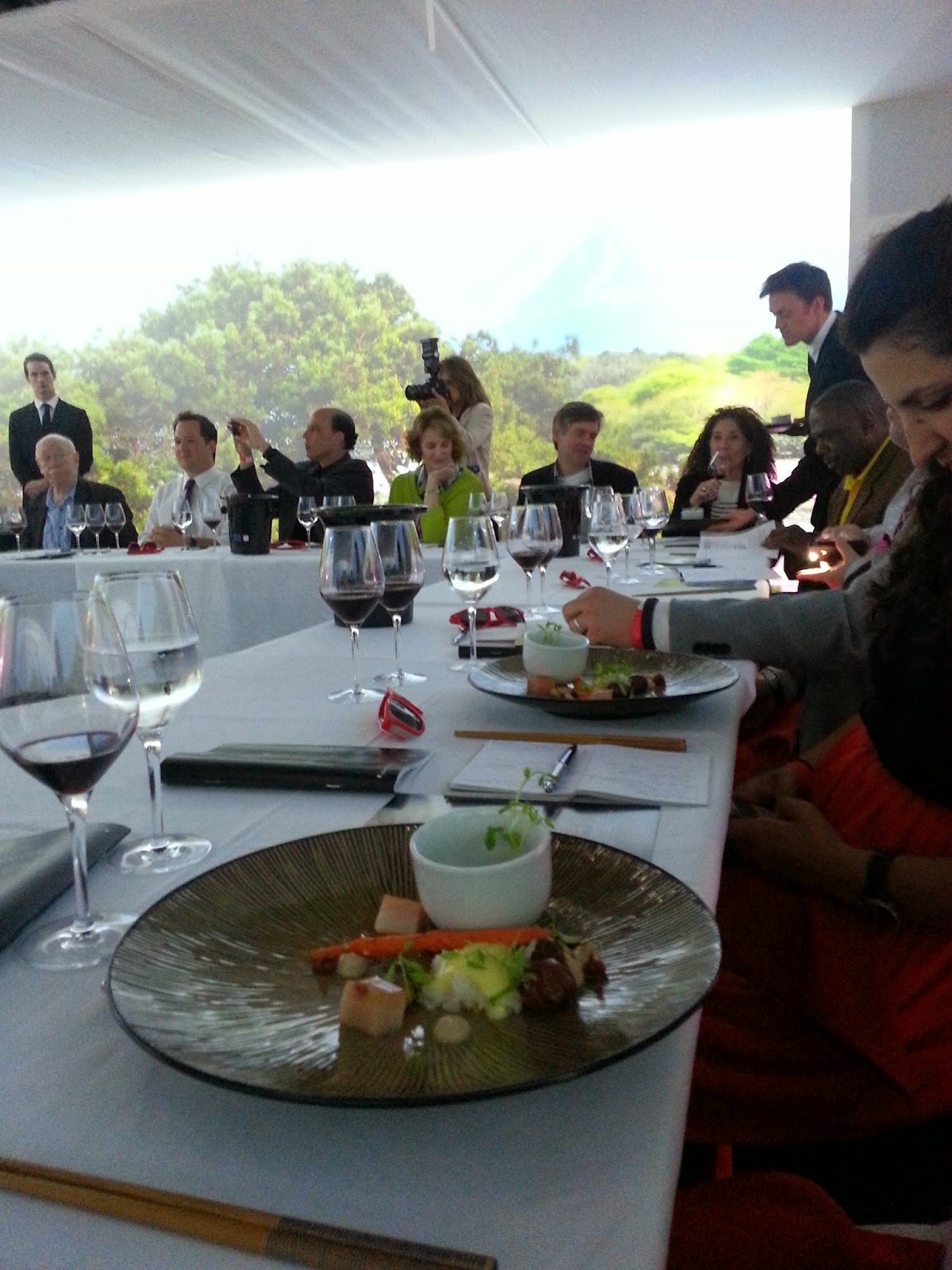 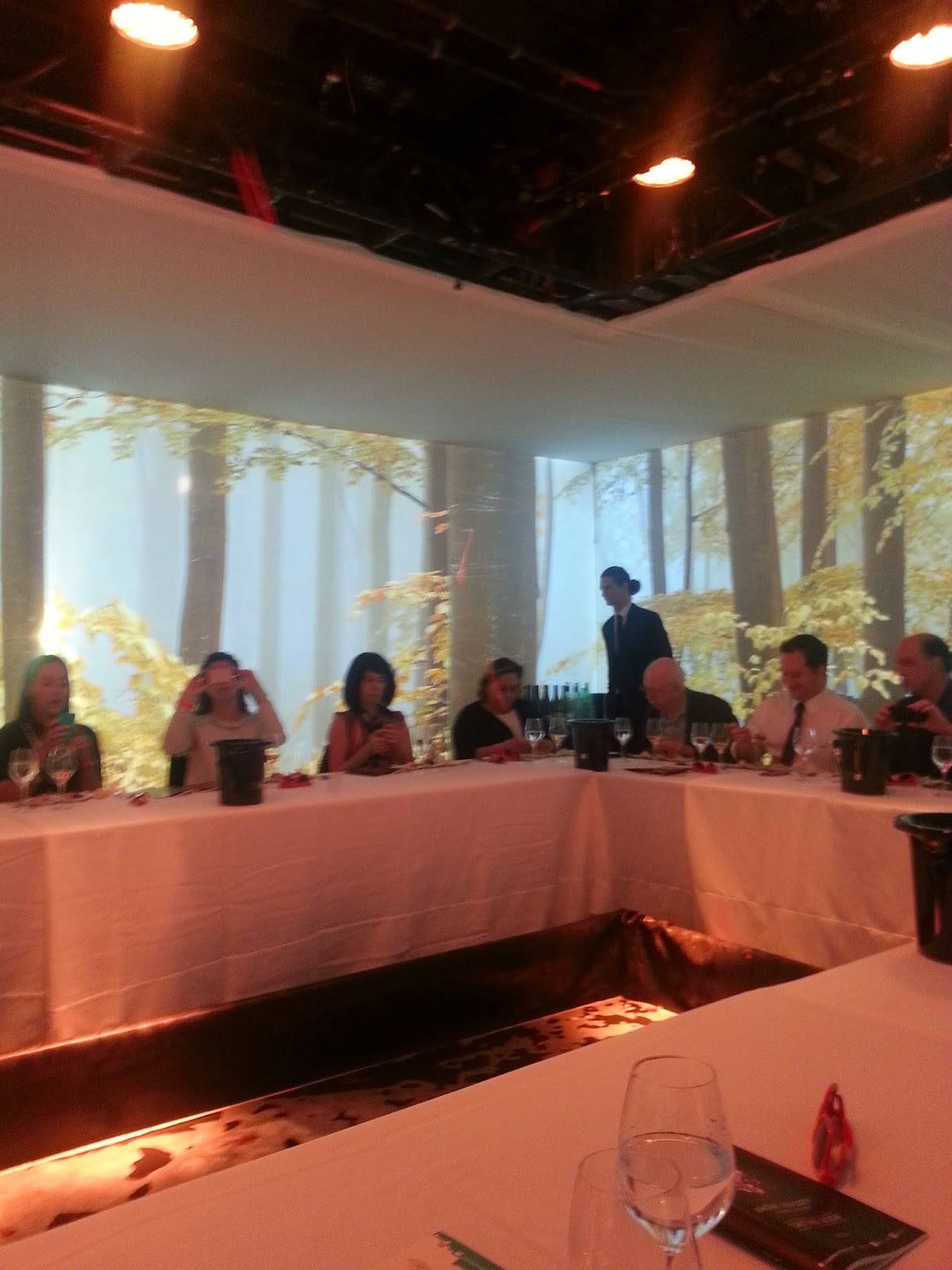 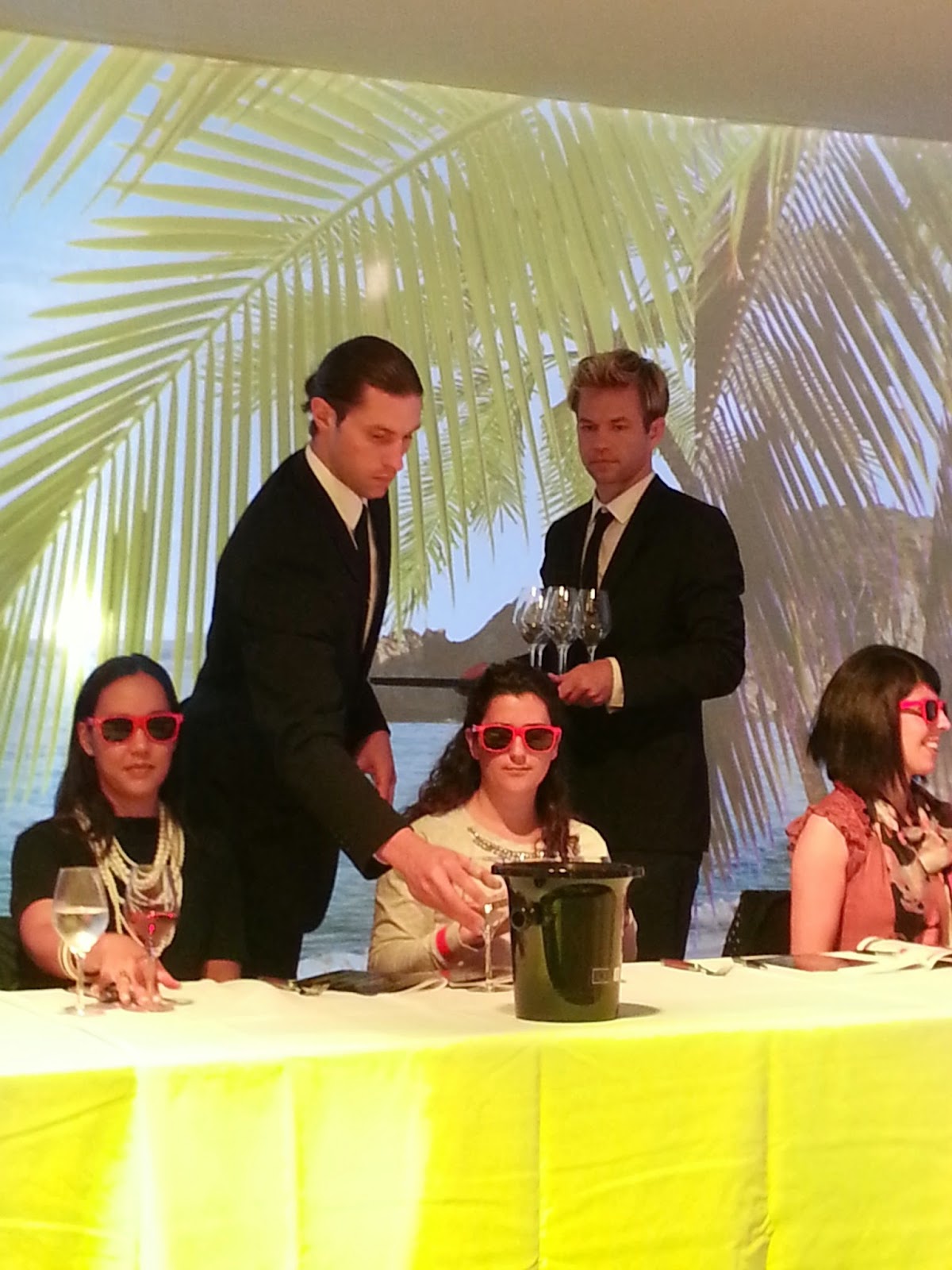 The blazing hot Mexico/Summer with Deconstructed Mole (below) 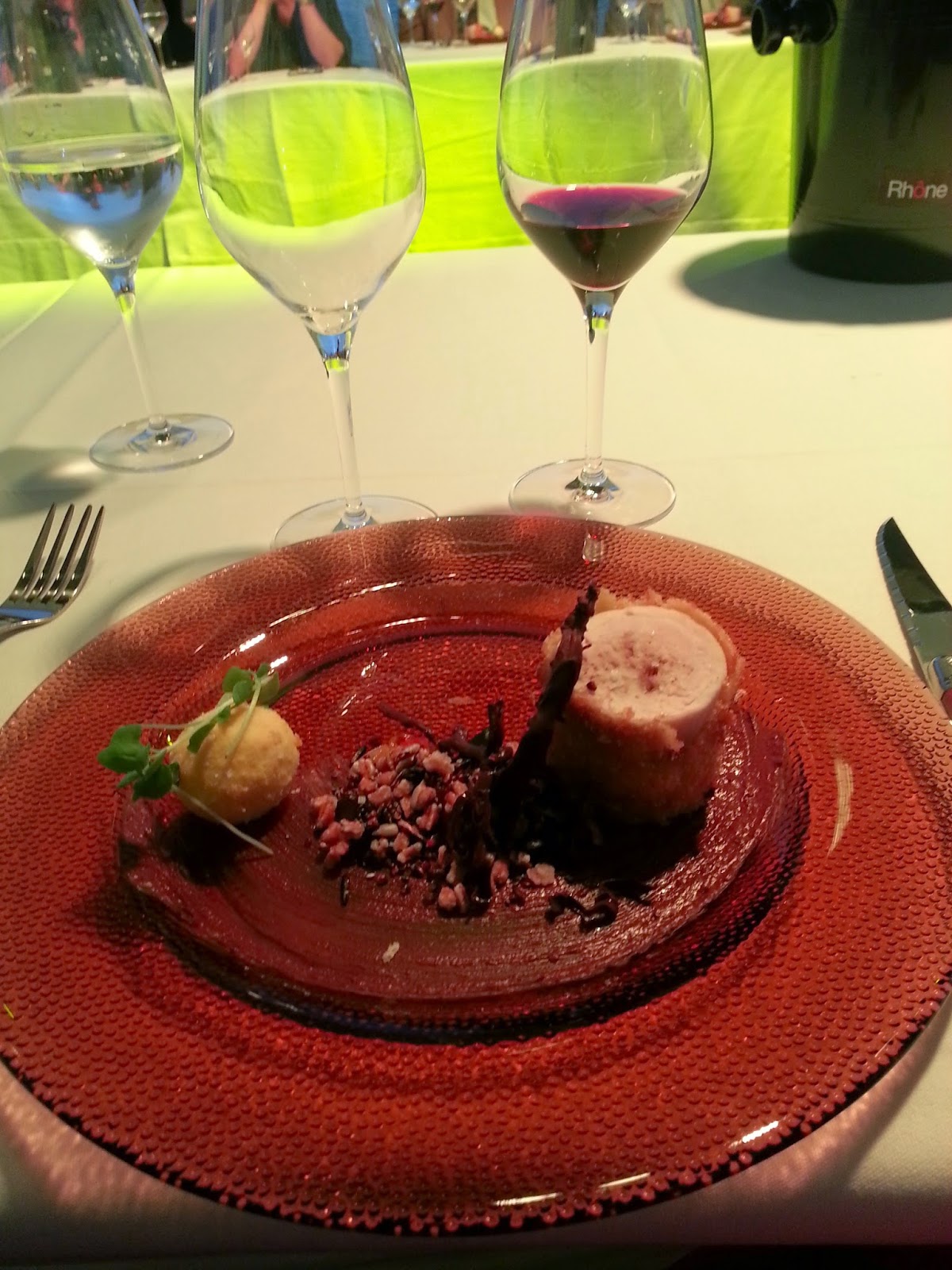 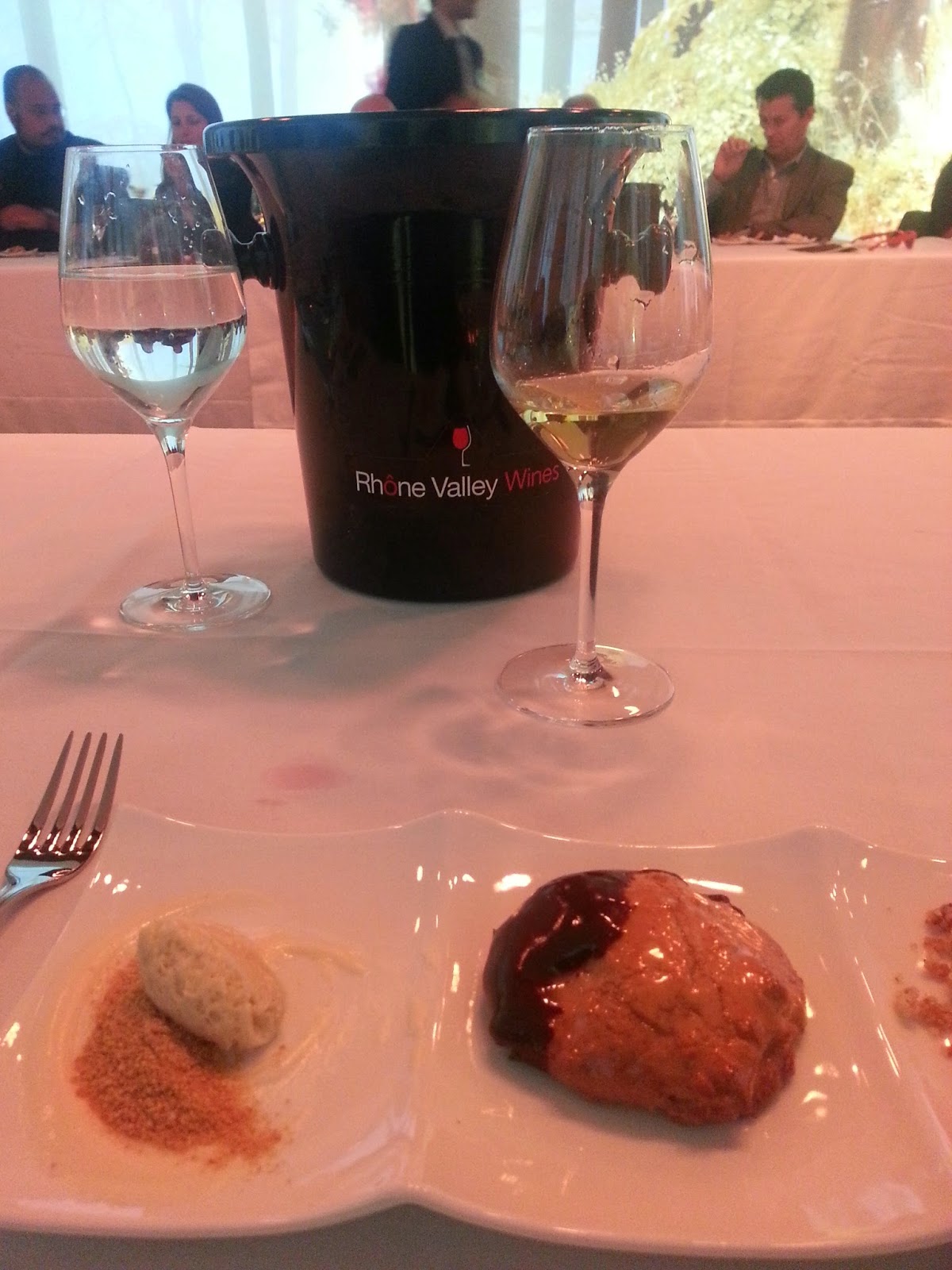 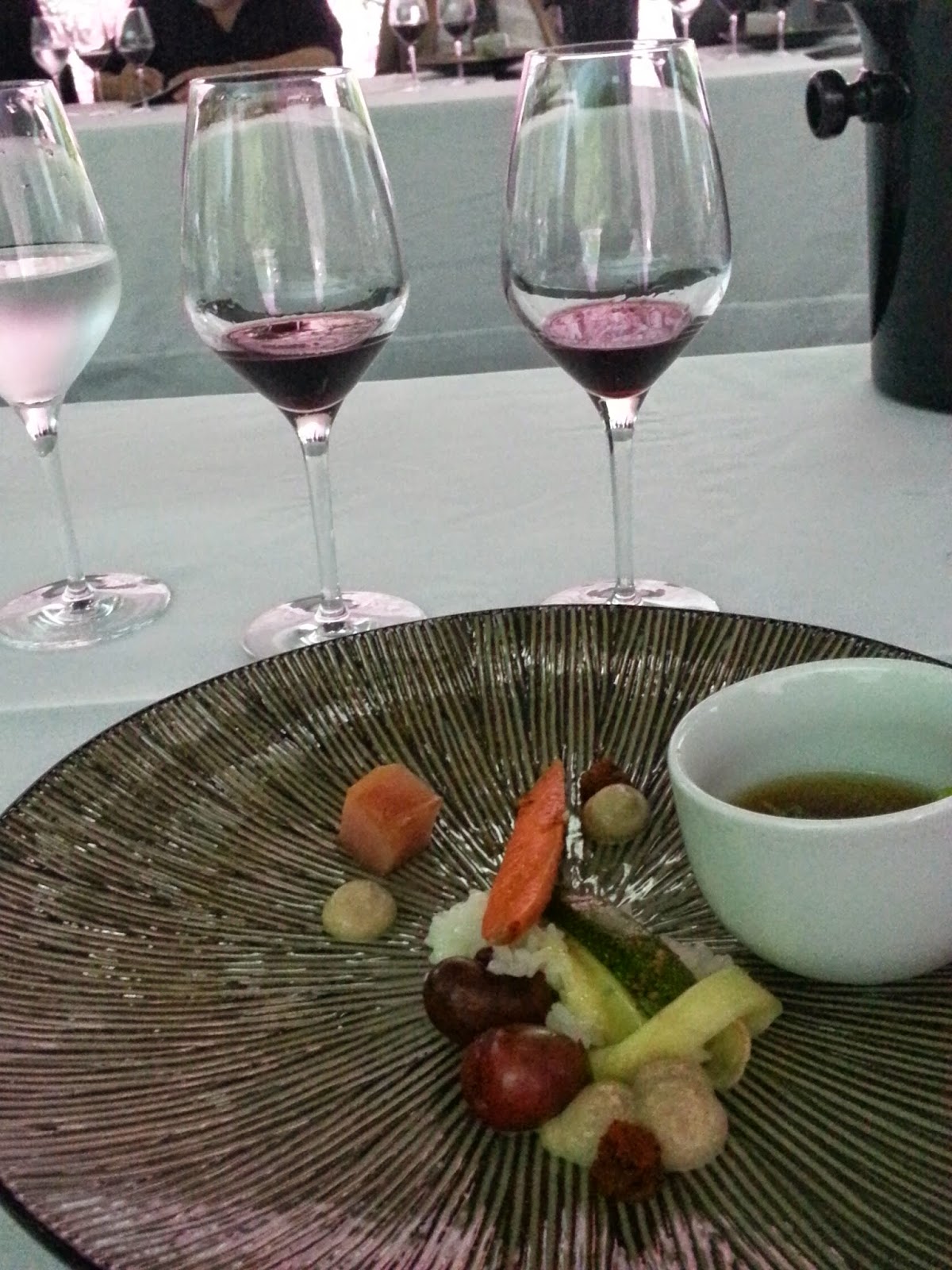 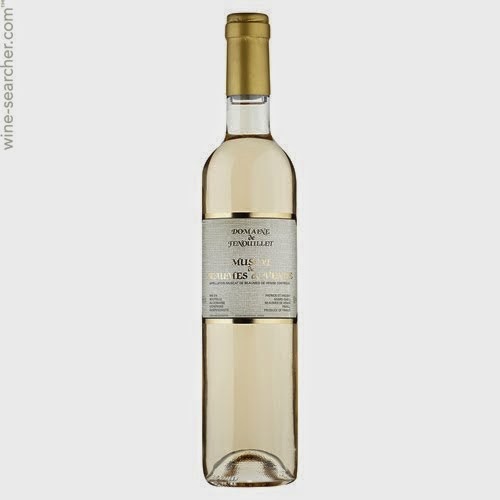 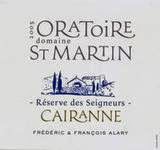 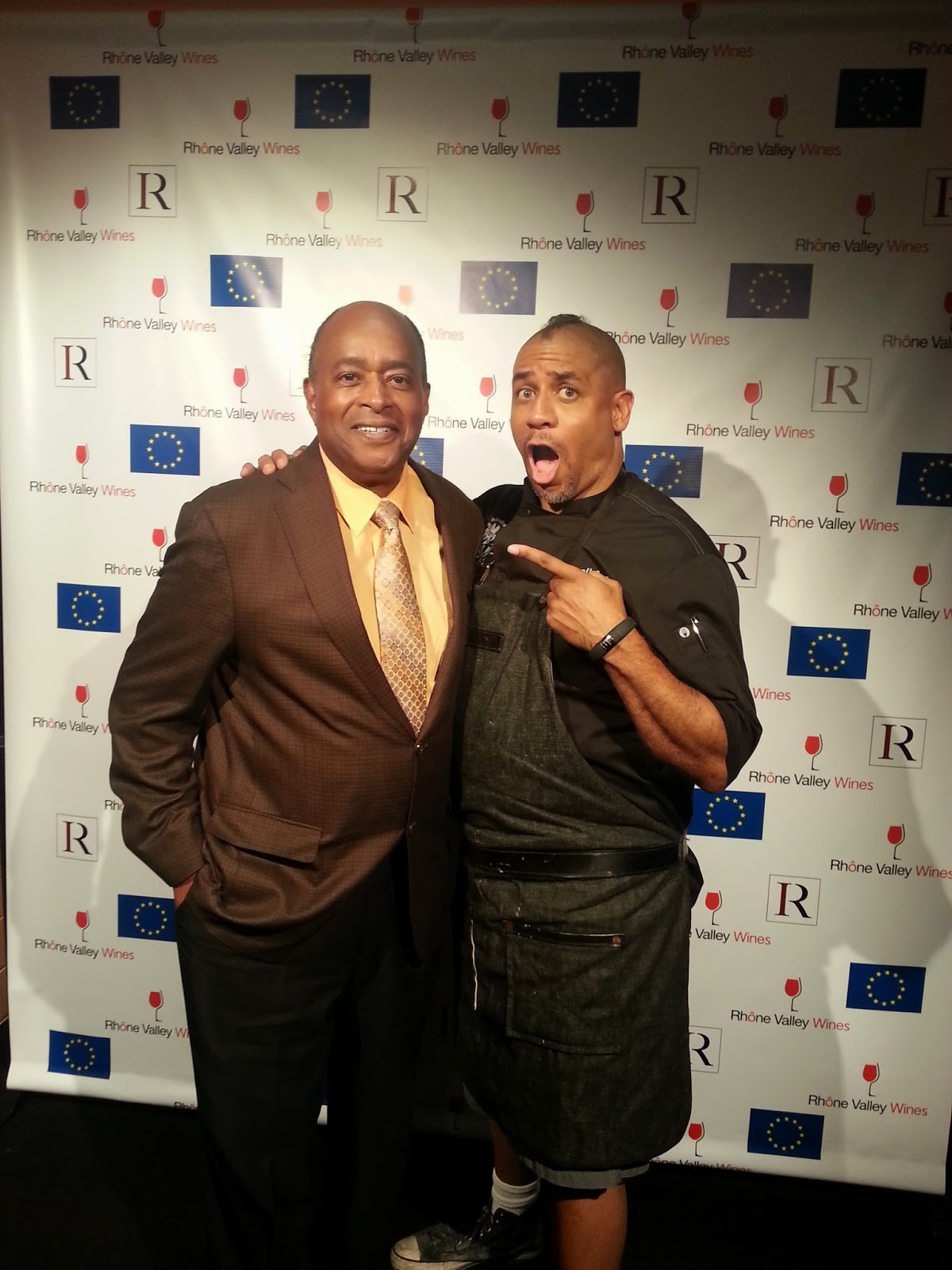 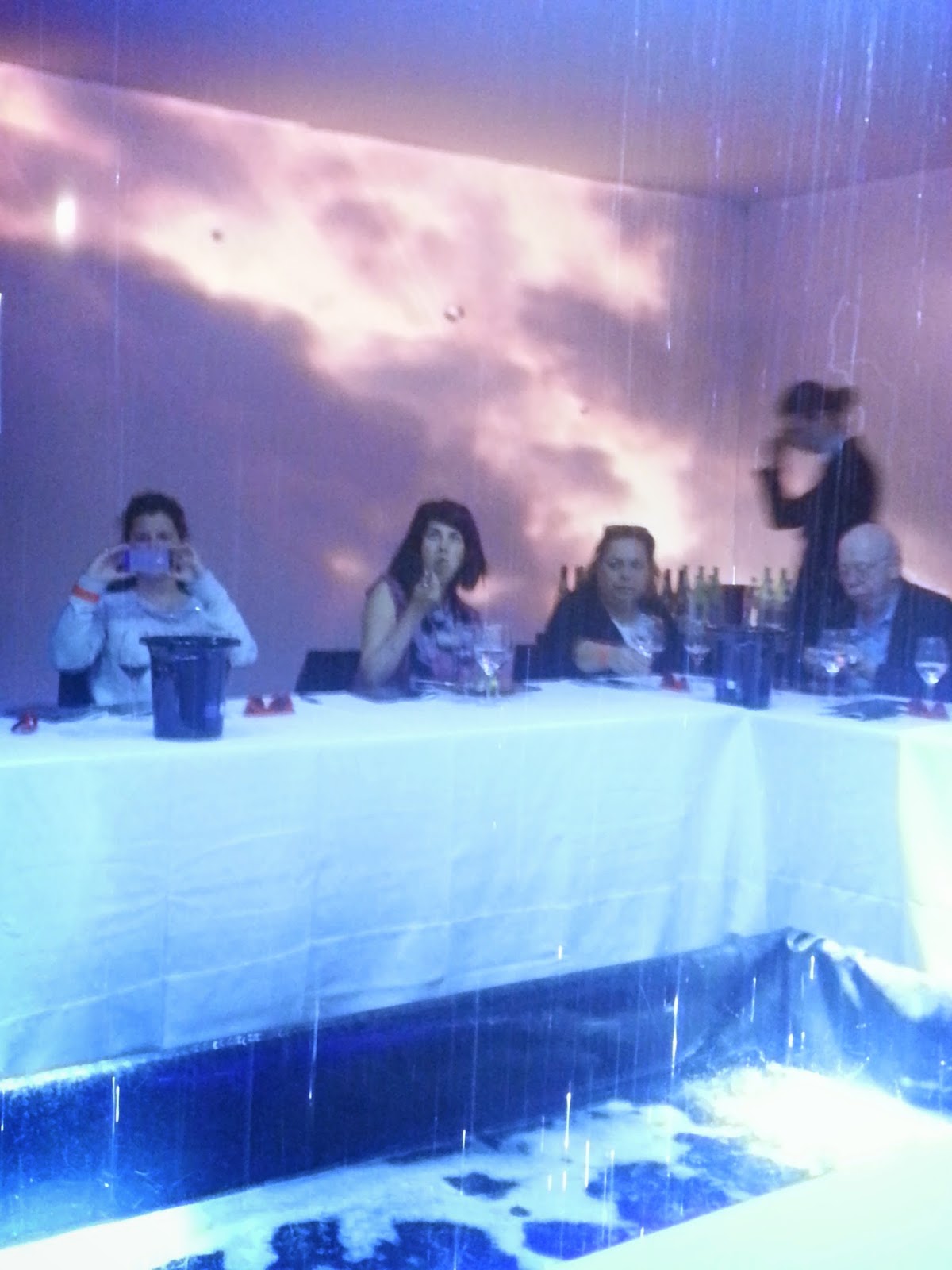 "Rain" during the Japan/Spring  sushi course 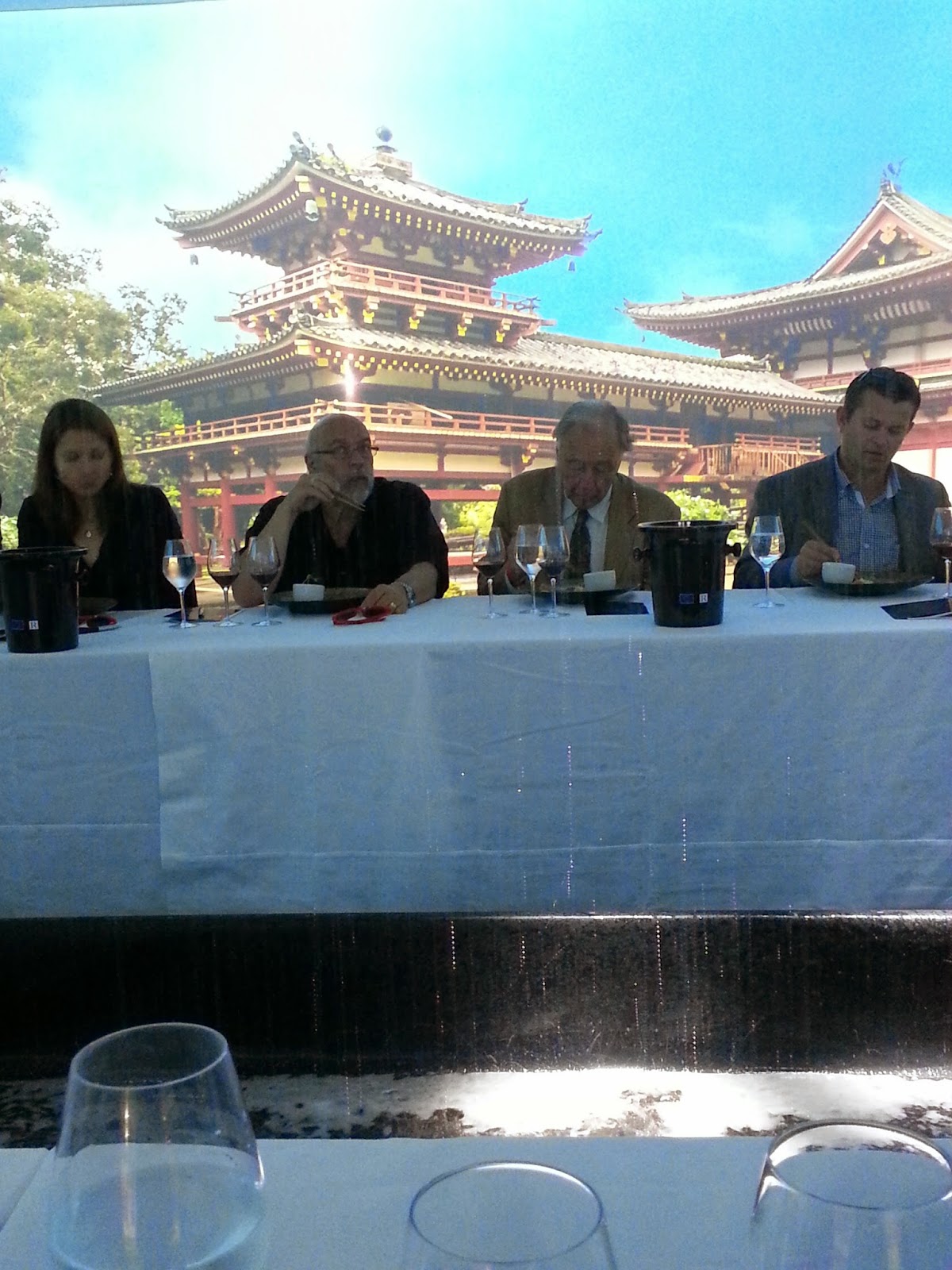 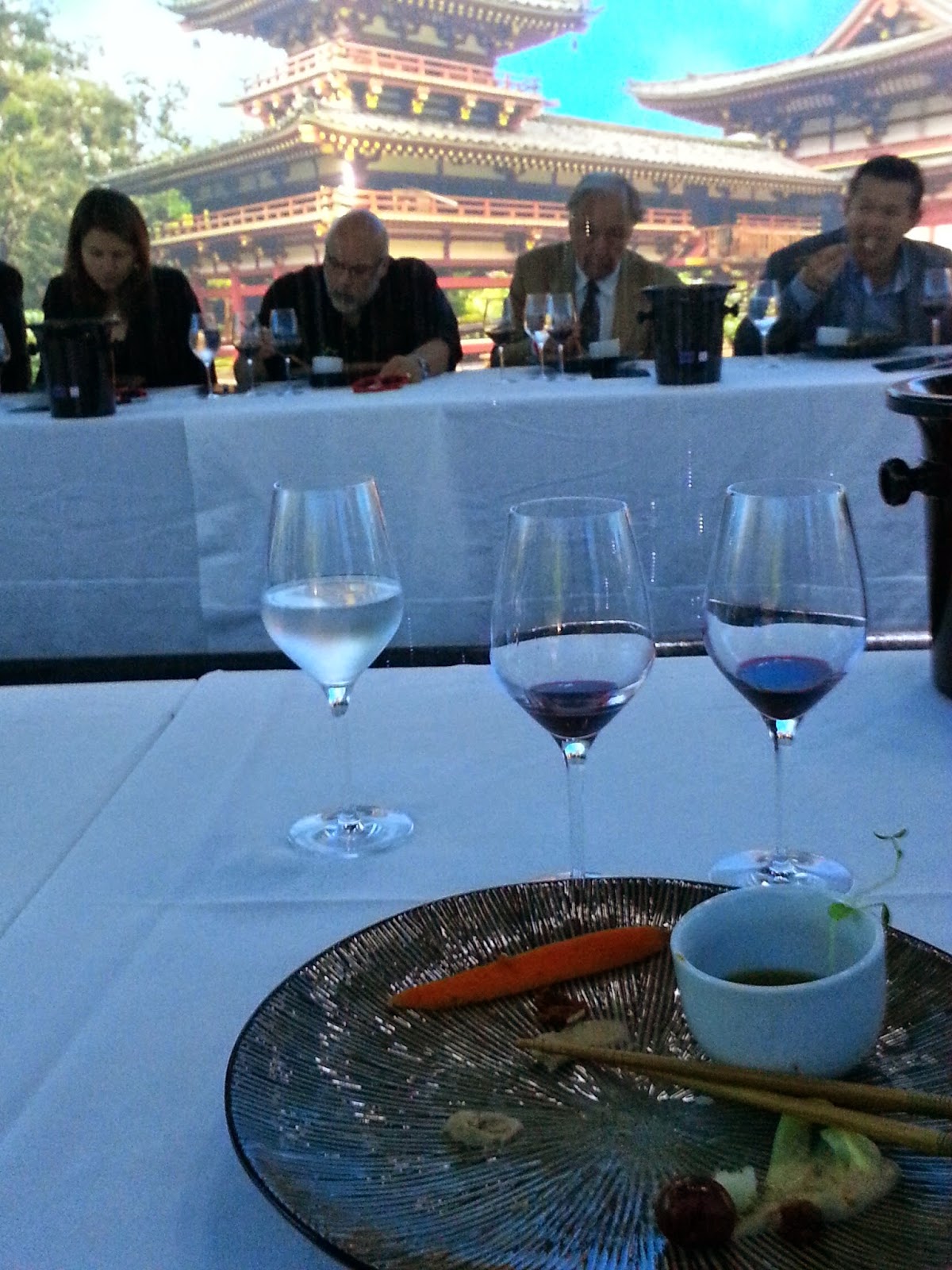 NEW YORK--How does this sound for a summertime lunch experience;  appetizers amid the snow-capped fjords of Sandinavia, cured fish sashimi cubes and pickled vegetables in the gardens of a Japanese temple amidst cherry blossoms and a gentle spring shower, a deconstructed roasted chicken mole amidst the Mayan ruins on a  sizzling Mexican summer afternoon and finally, Maple Brandied Cured Apple and Cinnamon Crumble pie  for dessert amidst towering trees in a New York forest with cascades of brightly colored dried leaves falling all around you.  It isn't a figment of the imagination or a mythical magic carpet ride. It' s a tasting experience put on by Rhone Valley Wines of France entitled Rhone Odyssey-A Sensorial Experience.
The unique presentation was held in SoHo's Old School Gymnasium on Mulberry Street and featured an overview of Cotes Du Rhone and Cotes Du Rhone Villages wines guided by Head Sommelier Michael Madrigale of New York's famed Bar Boulud along with imaginative cuisine prepared by Chef Russell Jackson of The Next Food Network Star fame.
Among the wines presented were Chateau Beauchene Grande Reserve 2013 White-$12, Barton and Guestier Passeport, 2012 Red-$15, Ogier Heritage 2012 Red-$14, Lirac, Notre Dame De Cousignac-$15, 2012 Red and Vacqueyras, Le Trois Couronnes, 2011 Red-$18, among a host of other terrific wines, some 50 in all.
The tasting was held in a black box theatre with tasting tables arranged in an open rectangle. The space was walled with floor to ceiling screens, upon which scenes of a Scandinavian Winter, Japanese Spring, Mexican Summer and New York Fall, and also featured some surprises; rainfall and artificial snow cascading from the ceiling above to a rubberized floor below. Guests were asked to don sunglasses placed at each setting for the Mexico/Summer portion.
Scandinavia/Winter was an Amuse PreSet with Rye and Bulgar Crisp, Butter and "Ash" and Malted Wheat "Dirt" and Pickled Carrots and Brussels followed by a Poached Egg, with Parsnip, Nettle Whey and Farmsted Cheese with a tasting of Crozes-Hermitage Maison M. Chapoutier La Petite Ruche, 2012 White-$22 and Barton and Guestier B26 Passeport 2012 Red-$15. This is where the "snow shower" came in. The Crozes-Hermitage is clean and fresh with a long finish that reveals the 100% Marsanne grape's source in gravelly, alluvial soil. The honeysuckle, pear and spice flavors melded perfectly with the flavors of the two dishes.
Japan/Spring featured Komby Cured Tuna along with Pickled Vegetables, Nori and Smoked Kombu Broth, which went spectacularly with the Cotes Du rhone Villages Cairanne "Reserve Des Seigneurs," 2011 Red-$17 from Domaine L'Oretoire Saint Martin. Enter projections of myriad cherry blossoms and a light "spring rain" cascading from water jets affixed to the ceiling. Lavau Rasteau 2012 Red--also $17, went best with the Komby Cured Tuna.
The Ban Rays came out for Mexico/Summer and the deconstructed mole with Poultry Roulade, Smoked Grains and Tcho Bitter Chocolate and Pepper Raja. This, in my opinion was the most successful wine  pairing of the afternoon with Cote- Rotie "Ampodium" Rostaing 2010 Red and Gigondas Lavau 2012 Red-$75 (and worth every penny).
The Modern Apple Pie rounded things out for the NYC Fall with Wood's Hudson Bourbon Barreled Maple Brandied Cured Apples, Cinnamon Crumble, Modern Cheese Cake with Vanilla Bean Gel and SCDNYC Almond Black and White Cookie with a special treat; Muscat de Beumes de Venise Fenouillet 2012, White-$34.  Beaumes de Venise is a lightly sweet, golden colored dessert wine made from the Muscat grape, which is probably the oldest grape that is  vinified. The wine is delicate and flavorful and a perfect ending to a great meal. Also, it's not served that often. Probably because it is not always readily available. Fortunately, with this tasting, the folks from Rhone Wine will make sure that there's plenty to be distributed to your local wine shop or favorite restaurant. It's a dessert treat not to be missed.
Posted by Dwight the Connoisseur at 12:13 PM