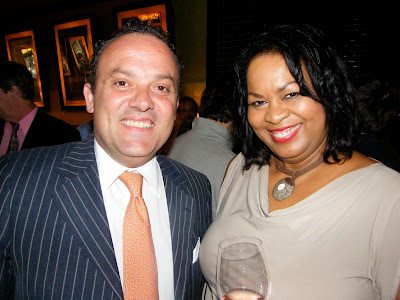 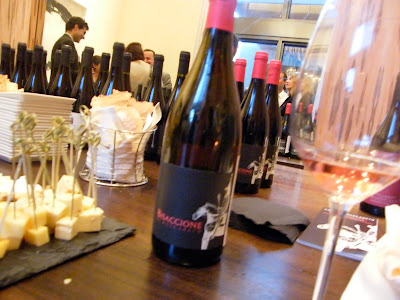 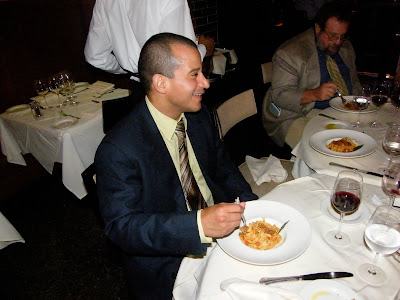 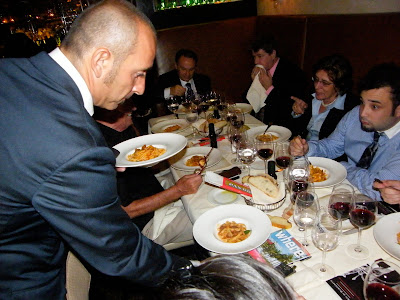 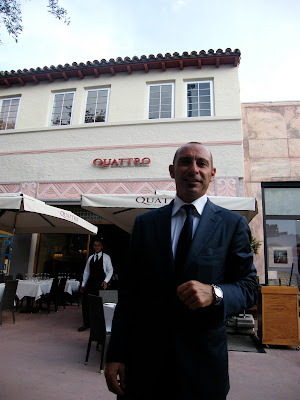 Enrico Giacomelli and Claudio Gabellini, co-owners of Conti Di Buscareto winery of Italy, were ebullient as they greeted a select group of wine media in their premiere Press Dinner, Hidden Treasures from the Hills of the Marche Region held at South Beach, Miami’s Quattro Gastronomia Italiana restaurant.

“These wines achieve their best expression when in the presence of food,” Giacomelli enthused while sipping a glass of sparkling Rose Brut made from the Lacrima Nera grape, which is unique to Le Marche.

Accompanied by an Antipasto of tuna tartar with capers, diced tomatoes, mustard and mache green salad, the fortunate diners dove into the most famous wine of the Marche region, Verdicchio, which was presented in two vintages; Verdicchio dei Castellii de Jesi DOC 2009 and Ammazzaconte, Verdicchio dei Castelli di Jesi Sellection DOC 2007. The two wines provided contrasting perspectives. The Castelli Di Jesi was floral, fruity and full of fresh, green apple flavor. The Ammazzaconte was more refined and complex with a slight bitter-almond aftertaste and hints of the French Oak barrels in which it was aged for 6 months.

The first course, Risotto with shrimp and asparagus provided the perfect accompaniment to the Ammazzaconte. The gentle brine flavor of the shrimp and the green minerality of the asparagus acting as counterpoints to the acidity present in the wine. The creaminess of the risotto made for a nice, cozy “umami” feel in the mouth. This is the kind of ‘comfort food’ they typically enjoy in the Marche and Quattro’s Chefs de Cuisine approximated the experience perfectly!

The House made tagliatelle with lamb ragu was an outstanding dish. I tasted the silky noodles prior to their being bathed in a shaving of fresh Parmesan. They were revelatory. There is nothing quite like the taste of fresh, handmade pasta. The taste is without comparison. The accompanying wines, Lacrima di Moro d’Alba DOC 2008 and Compagnia Della Rosa, Lacrima di Moro d’Alba DOC 2005 made for a Technicolor dining experience.

The Lacrima variety, “it means teardrop in Italian,” sales manager Claudio Luconi explained as servers brought out the First Course. “It is called that because of the appearance of a drop of the juice that breaks through the skin as it is harvested.” This early flowering, aromatic grape is brought to the essence of refinement in large oak vats for 8 months of refining. In the Morro d’Alba 2008 wine, the result is an intense, aromatic experience that brings out both the fruitiness and the fresh aftertaste. A light tomato sauce and the nutty flavor of the cheese made the wine literally dance on the palate.

I lingered over the Compagnia Della Rosa long after the pasta was cleared away in order to enjoy its lingering complexity. Aged in small oak barrels, it displayed delicate tannins and a pronounced fruity aftertaste mingled with spice and sensations of withered rose petals. The equipoise of delicate floral notes on the nose and deep red berries and oak at the back of the mouth made tasting the wine an intriguing experience.

All the culinary gloves were off in the next stellar course; thin, almost Carpaccio-like slices of the rarest Prime Beef Tenderloin, presented in their most pristine state with shavings of Parmesan cheese, slices of green pepper, a few capers and a sprig of fresh rosemary, which I broke by hand into tiny pieces to be chewed in concert with each bite. Combined with the Rosso Piceno DOC 2007 and the elegant Bisaccione, Marche Rosso IGT 2007 wines, it made for an absorbing dining experience that could easily have encompassed an entire evening. With each bite, I experienced a different quality from each of the wines. I found myself making a flurry of tasting notes on my Blackberry as I ate.

The best was saved for last. Verdicchio Dei Castelli Di Jesi Passito is made from Verdicchio grapes that have been affected by the Botrytis Cinerea, the ‘noble rot’, which occurs when the grapes are affected by cool temperatures after a hot day. This phenomenon usually occurs toward the end of the harvest. In Le Marche, it occurs in the first week of November. The wine then undergoes a soft pressing and is fermented in both small French oak barrels and stainless steel tanks for a total of 24 months. The wine is then aged in the bottle for 6 months. The resulting wine is unique and stunning. It possesses a bright, golden color with an intense bouquet and flavors of citrus, candied and dried fruits, honey and chamomile. It is a carnival in the mouth.

The kitchen wisely prepared a dessert that was not too sweet. It was a savory tart composed of almonds, figs and ricotta cheese. This more laid back approach to dessert allowed the wine to shine through. In hindsight, the wine could have stood alone as a dessert course. It can speak for itself.

Those who attended the dinner at Quattro experienced a singular event that will not soon be duplicated. Some of the wines introduced at the dinner will make their way into fine wine shops around the country. Others, because of their limited production, will only have been enjoyed by the lucky few assembled this night. The opportunity to attend this U.S. Premiere event will live long in memory. Arrive Derce Marche!

Posted by Dwight the Connoisseur at 10:19 AM