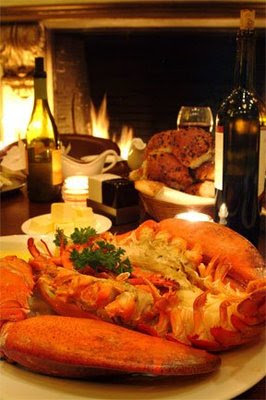 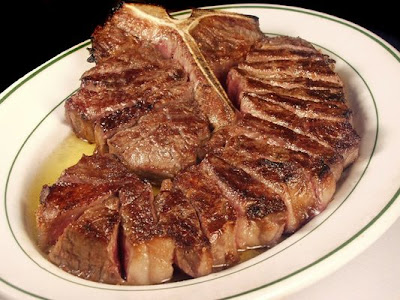 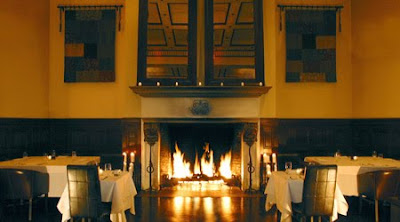 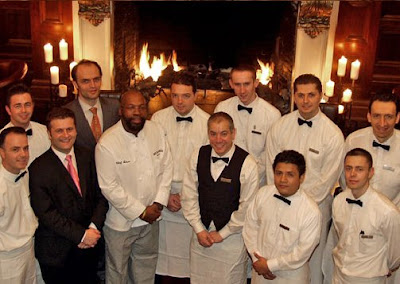 New York-Gotham is famous for its steak houses and none is more renowned than Benjamin’s Steak House. Located discreetly at the rear of the Dylan Hotel in the city’s toney Murray Hill area, downtown, the restaurant has become a virtual institution in its short life. Opened in October, 2006,
Benjamin’s, with its clubby atmosphere and cozy, fireside setting, seems as if its been there forever.

Perhaps the fact that Executive Chef and Partner, Arturo McLeod, a 20-year veteran of Peter Luger’s legendary steakhouse in New York, has brought with him an air of authenticity and creativity that is unparalled. His menu is simple, yet very straightforward. He adheres to the basics, but with his own personal stamp that makes each bite a memorable flavor and texture adventure. There is only one way to do great steak, and that is the correct way. Chef McLeod scores a winning goal with each plate that he serves. It is especially evident when the meal is served with great wine as Dwight The Wine Doctor experienced on a recent visit with he and his exceptional staff in New York.

Brought along for the culinary ride were a couple of bottles of superlative Italian wines, RoccaSveva Suave Classico 2008 of Verona ($19.99) and Frescobaldi Remole ($10.99), a joint venture of the scions of an Italian American (Michael Mondavi of Napa Valley, California) and an Italian dynasty (Lamberto Frescobaldi of Marchessi de Frescobaldi, Tuscany). The two wines paired perfectly with Chef McLeod’s cuisine.

Speaking in the delightfully lilting accent of his native Panama, Chef McLeod explained how care in preparation was the key to the dining experience at Benjamin’s.

“The secret to our steaks is in the dry-aging,” he declared. “We age our meats for no less than 28 days. I also serve our steaks with my secret sauce, which has become a landmark in New York.” Chef McLeod would not reveal the recipe, but I can say with certainty that it is absolutely delicious and like no other steak sauce I have ever had, and I have had them all! The flavor of the sauce complements the mineral undertones of the meat without overpowering it. The taste definitely warrants a return trip on my next visit to the Big Apple!

I was pleasantly surprised by the quality of the crabmeat in the over-sized crab cake appetizer and the succulent quality and size of the shrimp in the traditional shrimp cocktail. These ‘starters’ provided the flavor template for the exquisite RossaSveva Soave Classico. With its inviting nose of fresh peaches, lavender and olive oil it created an almost creamy sensation on the tongue when combined with seafood. It carried right over to the sea bass, which was the largest and thickest piece of this type of fish I’ve ever had. It was also the freshest tasting. Grilled simply with a slathering of fresh, creamy butter, it was an unforgettable flavor experience. Combined with the wine, the buttery flavor lingered long in the mouth and married with the wine in the back of the throat with a combination of light almond extract and a hint of fresh minerals that made it a nice alternative to your typical summer wine. This wine really held up to the food, but still had a lightness and feminine quality that made it seductive.

Steak at the Benjamin takes center stage, like a Broadway tenor bringing the house down in the second act of Lend Me A Tenor. The Frescobaldi Remole supported the strong mineral flavor brought out by the careful aging of the steak. The texture was fork-tender and the sensation in the mouth was explosive when combined with Chef McLeod’s secret sauce. I was so overwhelmed by the flavor combination that I reserved a good portion of the steak to take back to my suite at the Affinia 50, which contained a kitchen, allowing me to attempt to replicate my dining experience with a bit of left over Remole. Bravissimo, Chef McLeod!

Posted by Dwight the Connoisseur at 2:14 PM