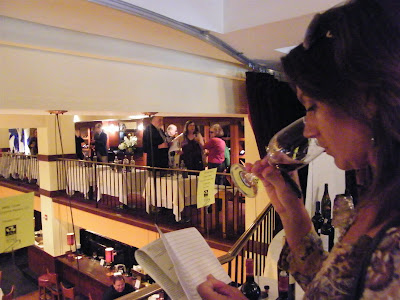 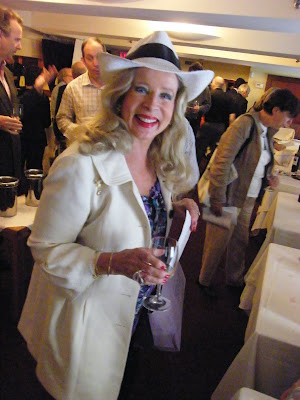 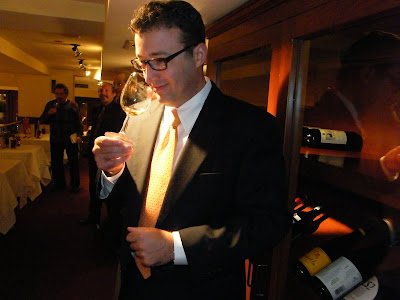 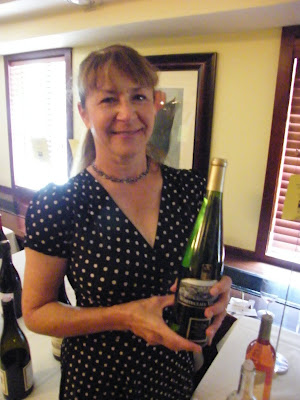 The wood-paneled loft wine library of mid-town Manhattan’s Beacon Restaurant was the scene for the east coast road trip for the 2010 San Francisco International Wine Competition Double Gold medal winners. In many ways, the New York showing was a bit more comprehensive than the one in Chicago and presented some different and unique gems. Among them, the winner of the Best In Show white wine, Whitecliff Vineyard 2007 Riesling ($15) from a tiny, family-owned winery in upstate New York.

Unless you visit the winery in its obscure, remote location on McKinstry Road in Gardiner, New York a couple of hours outside Manhattan, or dine at the trendy American Nouveau restaurant, Gramercy Tavern in the Flatiron District on East 20th, near Park Avenue South, you will not have an opportunity to taste this most luscious of golden-colored wines. The winery has a total production of less than 4,000 cases a year. A pitance, even by boutique winery standards.

Owner Yancey Stanforth-Migliore and her husband Michael started the winery thirty years ago, in what was then an empty field. Their objective, all along, was to develop artisan wines that honored both the agricultural traditions of the Hudson Valley and the European style of producing complex, yet approachable wines. Never in her wildest dreams, did Yancey, who was on hand to personally pour the wines at the Beacon tasting, imagine that her wine would walk away with a prize at a top international wine competition, much less, one of its highest honors.

“We’re really tiny in the scheme of things, so you can imagine that my jaw dropped when they called and told me that we had won best of show.”

As if to corroborate the declaration, one of the journalists attending the tasting chimed in; “you won in a blind tasting of 1,200 wines!” That put the exclamation on a point well made.

“We don’t like to enter our wines into competition, so we entered the San Francisco competition reluctantly,” she said. “Sure enough, we got a call from UPS that our entry bottles were completely crushed and were sent back to us. We were already at the deadline, but when we called the competition, they said they would still consider us if we could overnight the bottles.”

From that inauspicious beginning, a Double Gold, Best of Show award was born.

Michael Migliore has an impressive pedigree and seemed destined from birth to live a life in wine. He studied for a master’s degree in organic chemistry at SUNY, New Paltz. In 1978 he started work at IBM as a chemical engineer in semiconductor manufacturing, and soon after began experimenting with grape growing as a natural expression of his background and his skills in chemistry. Wine had figured prominently in his upbringing: his German and Italian grandfathers both made wine at home, and it was part of every family dinner.

His wife, Yancey joined in the planting soon after they met—through rock climbing on the Shawangunk Ridge—and married in the early 80’s. While she doesn’t bring technical skills to the business like Michael, she has developed the ability to teach about wine that contributes to Whitecliff’s Tasting Room.

Today Michael works closely with Cornell Cooperative Extension testing new grape varieties, and pushing the envelope on the quality of grape growing in the region. In that capacity he also serves as president of the Hudson Valley Wine and Grape Association.

I poured myself a healthy glass of the golden-colored Riesling and settled into one of the Beacon’s cushy leather library chairs and savored the wine along with a fistful of Laura Chenel’s superb, creamy American Chevre goat milk cheese from Sonoma County, California. It was a heavenly match with the slight tang of the goat’s milk tempered against the fruity ebullience of the wine. The cheese acted as a sort of automatic palate cleanser between sips of wine.

In spite of its effusive fruit, there was a hint of restraint in the wine. That’s probably what impressed the judges. I know that it nearly knocked me off my feet. There was a perfect balance of acid, fruit and a little bit of terroir coming through on the finish. This was a perfectly executed Riesling. I was reminded of the first encounter I had with German Riesling. It was a Rudesheimer Riesling Spatlese. I had purchased it from the old Chalet wine shop in Chicago’s Sandburg Village. I was just learning about wine at the time and the shop steward, a distinguished-looking grey-haired gentleman of German ancestry, was quick to point me in the direction of the wines of his homeland. He even opened a bottle and poured me a copious taste. It was liquid gold. Tasting the Whitecliff Riesling reminded me of that experience. Yet, it was something quite different. It was not quite as austere as the German wine. It was also very expressive, with overtones of the region and the soil it came from. You could almost imagine the wine-swept vistas of the Hudson Valley in every sip. In every way, it was a picturesque wine.

Posted by Dwight the Connoisseur at 12:10 PM