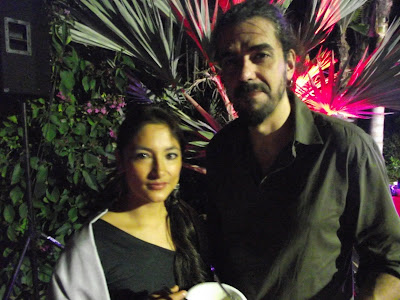 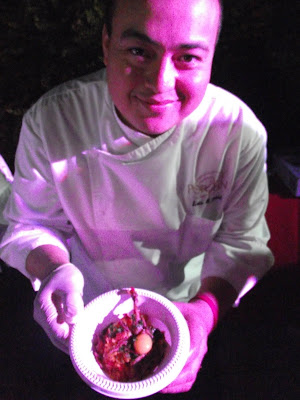 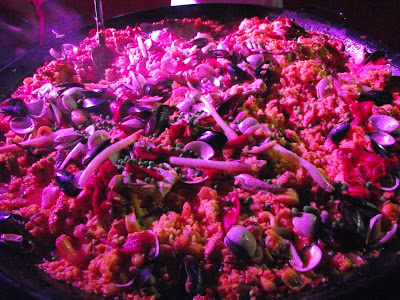 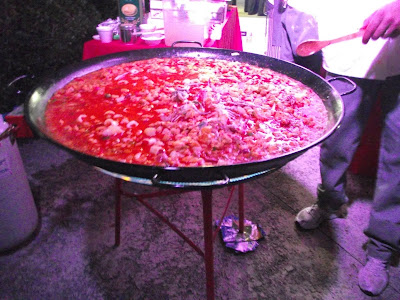 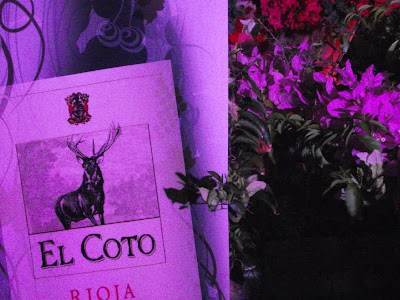 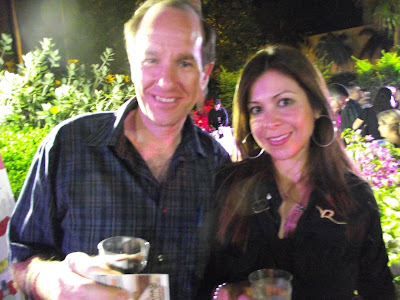 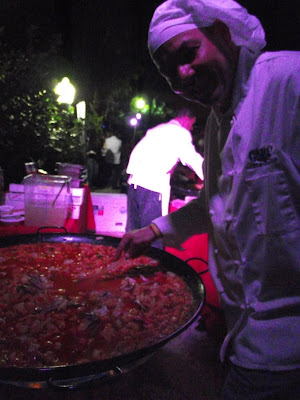 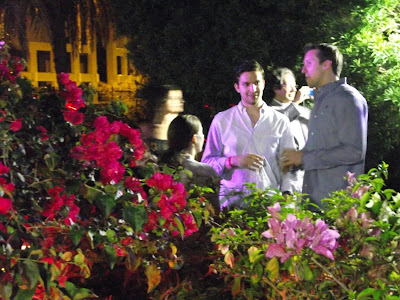 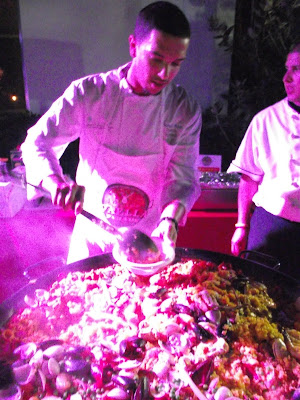 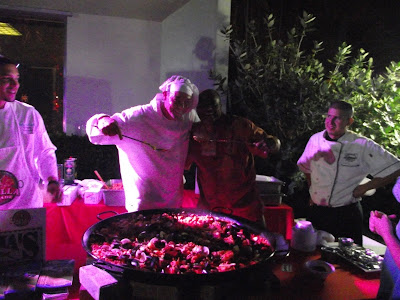 Amador: North American Premiere examines estrangement and the afterlife with a touch of Saffron and Rioja

SOUTH BEACH, MIAMI BEACH, FLORIDA—Amador, the Spanish-language film (with English subtitles) from Spain, in its North American Premiere, was the centerpiece of a night dedicated to the food, wine and moral and ethical sensibilities of Spanish culture. Amador is in World Competition at the festival.

The film, a sixth outing for the award-winning Madrid-based screenwriter and director, Fernando Leon de Aranoa, who last appeared at the Miami Film Festival seven years ago with his film Princesses (Princesas). Amador examines the issues of loneliness, prejudices regarding immigration, and emotional attachment to departed loved ones, in this case, bordering on necrophilia. Add to the mix the overlay of a thematic story line that follows the arc of the life and death of flowers and their relation to human life and death and intimations of the after-life and you have the threads that director Leon weaves into the rich tapestry of this film.

The cinematographer immediately introduces us to the bleak landscape of suburban Madrid and the sub-culture of its immigrant flower merchants. He provides the perfect tableau for the ensuing moral drama to unfold. The pacing and the dialogue by Leon, who also co-wrote the script, are masterful, but it is the luminous actress Magaly Solier, whom I recognized from the Academy Award-nominated Peruvian film, “The Milk of Sorrow (La feta asustrada), who really knocks this film out of the cinematic park. If there were ever an Oscar for the pure art of acting, Solier would be the winner. She conveys more with a mere look; the quiver of a cheek, the arch of an eyebrow, a Mona Lisa-like smile, that conveys more meaning than all the words of Shakespeare.

As the impoverished immigrant, Marcela, she struggles to find some emotional connection to the world around her. There seems to be no relief from her overriding sense of loneliness and emotional abandonment.

In the film, she is seen living with her lout of a boyfriend, Ernesto, who only sees her as a sex object and a foil for his illegal business of selling stolen flowers in the streets of Madrid. He could get a normal job, but he refuses to. He’d much rather hang out with his cadre of street scum and chase his wild, and unproductive dreams.

Early in the film, Marcela learns that she is pregnant, but is afraid to tell him, because she is sure he will leave if he finds out. In order to bring some much-needed cash into the household and help her boyfriend pursue his misguided dream of expanding his flower business, she takes a job as caretaker to a dying man. The low-paying job is typical of those to which immigrant workers are relagated. She is payed a barely liveable wage under the table by the vainglorious Teresa, who could care less about her dying father, Amador.

Marcela grows attached to the taciturn old man and their platonic relationship deepens as they both express their loneliness. Each in their own way makes a vain attempt at finding meaning in a world that always seems to exist just beyond their grasp. Amador spends hours putting together the pieces of a puzzle as a distraction from his bedridden tedium. The puzzle becomes a metaphor for Marcela’s disjointed life and shattered relationship. (“In life, you are alone,” she says. “So you try to find someone to be with. But it stays the same. In the end, you are still alone!”)

The old man surmises that she is pregnant and asks to touch her swollen belly. He offers a half-hearted prayer. Speaking aloud to the unborn infant, he assures her child that there will be a place for him in this world. “You can take mine. I will save a place for you,” he declares. It is a touching moment.

Marcela demands that Teresa pay her in advance so she can put a down payment on the refrigerator her boyfriend wants to store flowers for his business. He calls the business “Marcela’s Flowers” and places multi-colored refrigerator magnet letters on the door that read “Floris Marcella.” Instead of delighting her, the garish display drives a knife through Marcela’s heart and makes her feel even more alone and unappreciated.

Just as things appear to be going along swimmingly, the old man dies. Marcela is in a quandary. Should she tell Teresa her father is dead and lose all of the money she so desperately needs? More importantly, should she give up the one relationship and emotional sanctuary, that has given meaning to her desolate life.

In the course of her dilemma, she seeks counsel from two disparate sources; her priest, who inadvertently convinces her to continue the deception, in the film’s most wildly hilarious scene, and from an aging hooker, who pays weekly conjugal visits to the old man.

Amador is a touching film that applies gentle humor to some touchy and uncomfortable subjects. It offers a new perspective on sudden death and belief in the afterlife and affirms the enduring power of love.

“I wanted someone who was really an outsider,” director Leon said in his post-screening comments, in which he appeared with the actress Solier at his side. “The character Marcela is from Ecuador or Chile, we never make it quite specific. But the important point is that she is estranged and feels somewhat detached from her immediate environment. We see it even more with her relationship with her boyfriend. Then, the point is really driven home when Amador dies. Her relationship with Amador turns out to be the only real anchor in her life.”

Later, the director and star segued with the entire audience to the Miami Beach Botanical Gardens for the Paella Parade, presented by El Coto de Rioja, the premium Spanish wine maker.

Presenting their outstanding wines, including El Coto Rosado, a refreshing Salmon-colored blush wine made from the perfect combination of 50% Granacha and 50% Tempranillo, the native premium grapes of Spain, El Coto Crianza, a Reserve wine made with 100% Tempranillo grapes that is aged 14 months in new American oak casks, and El Coto Blanco, a refreshing white wine made from 100% Viura grapes, another native varietal from Spain, which is fermented in stainless steel tanks to preserve its freshness and crispness.

The main event of the after-party was a parade of the most delicious Paellas imaginable, from the best chefs and restaurants Miami has to offer. Paella is a traditional rice casserole, prepared in a huge round, shallow pan with saffron rice, herbs and a hearty mixture of seafood, poultry and Spanish cured meats. The flavorings and varieties are left to the whim of the chef and each Paella experience is different. There was a contest to choose the most imaginative and delicious Paella. My personal favorites were the Quail Paella from Por Fin Restaurant & Lounge, which featured copious bits of fresh quail and was topped with raw quail eggs and fresh cilantro and the savory Seafood Paella created by Chef Steve Garcia of Garcia’s of Miami.

Over a dish of marvelous seafood Paella from El Carajo International Tapas & Wines, director Leon and actress Solier took time to share their thoughts on the film. “What I like about Magaly,” Leon said, referring to his lead actress, “is her ability to express so many emotions. Her face is like a diamond that catches the light in so many different ways. She is a powerful actress, yet she is still very subtle in that way.”

The evening was a combination of art from the cask, and from the culinary and cinematic arts. It made for the perfect blend for Dwight The Wine Doctor!

Posted by Dwight the Connoisseur at 5:31 AM