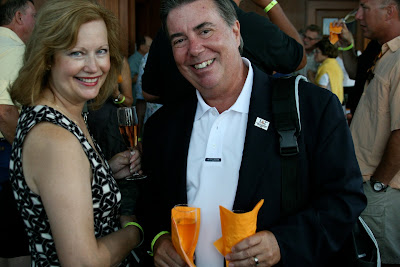 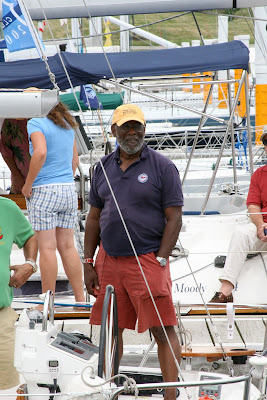 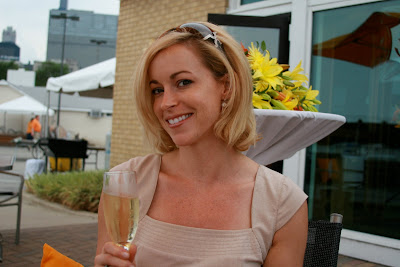 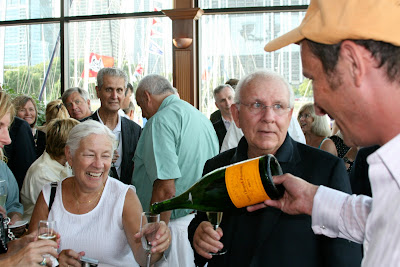 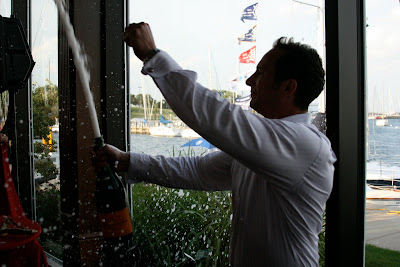 The skillful swoop of a sword lopped off the neck of a Magnum bottle of Veuve Clicquot Champagne providing the opening shot for the Warning Gun Reception to celebrate the 102nd Chicago Yacht Club Race to Mackinac.

“We can’t thank them enough for their support,” 2010 Race Chairman Greg Freeman said while sipping a glass of the fine bubbly on the terrace of the Chicago Yacht Club as racers readied their boats dockside. “You’ll be seeing a lot from and about Veuve Cliquot at the club and all around Chicago over the next few days. I understand they have some real surprises for the sailors when they reach the Island. “In many ways, this year’s race will be bigger and better thanks to their support.”

More than 3,500 sailors are competing in the 333-mile race on Lake Michigan, which is said to be the largest fresh water regatta in the U.S.

We’ve got sailors competing here from all over the world, including a team that’s here from Hong Kong. We’ve also got the largest boats competing along with our multi-hull division down to our smaller boats, making this the most diverse racing event in the world,” Freeman emphasized.

One of the outstanding features of the race will be online tracking by GPS. “We welcome IonEarth from Traverse City, Michigan as our new tracking supplier. “Online tracking is now an expected part of yacht racing. When we started it a few years ago, we were one of the first and now it’s become routine for people to be able to track our competitors in real time on their laptops. This is not an inexpensive proposition, but its all been made possible by the support of IonEarth and our Presenting Sponsor, Veuve Clicquot.”

Over the course of the evening, as the champagne flowed, including Veuve Clicquot’s newest version of Rose, harrowing tales from some of the Mac Race’s “ Island Old Goats”, seasoned veterans of 25 or more Macs, began to surface around the room.

“This will be my 29th Mac,” Tom McMahon of the Bang 36, Timberwolf told me dockside. “I’ve had every experience from dismasting in a storm to being cast adrift in the dark and stormy seas. Uncontrolled jibes are also very scary. One happened to me and my crew in the late ‘70s. It was pitch black. There was no starlight or anything. Suddenly, we lost control of the boat. It just rounded up and went over. We had the sail in the water, the boat was in the water and there was no indication that it was going to come up. There we were adrift in the middle of the night with no hope of ever getting up. By some miracle, something happened and we suddenly righted. When that kind of thing happens, you swear you’ll never race again. Once you finish the race, you’re so excited that you’re right back in it planning for next year’s race!”

There are othermoments of exhilaration. “It happened once when we were going through the northern straits. Suddenly, the wind started blowing and we were going 20 knots. That’s the fastest I’ve ever gone in a boat. We made it through in less than an hour. That was the most exciting race I’ve ever been in.”

s the champagne flowed, the stories got more elaborate. Tall tales are just a part of what the Mac is all about. There’ll be even more harrowing tales by the time the winner is handed a giant Nebuchadnezzar of Veuve Clicquot Champagne (named for the Babylonian King and which contains the equivalent of 20 standard bottles or 15 liters). Try lopping off the top of that one with a sword!

Posted by Dwight the Connoisseur at 4:46 AM