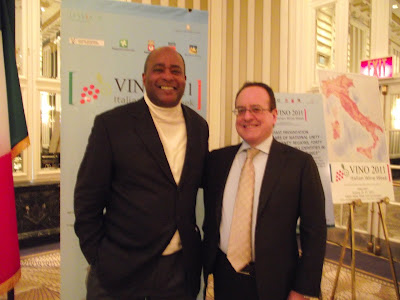 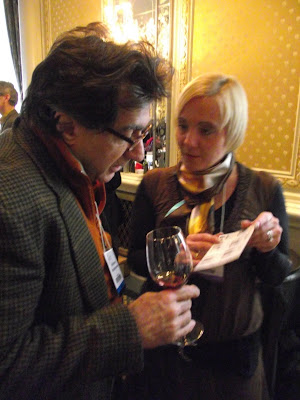 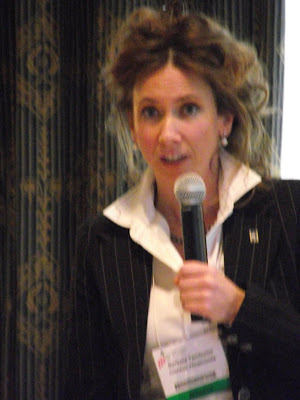 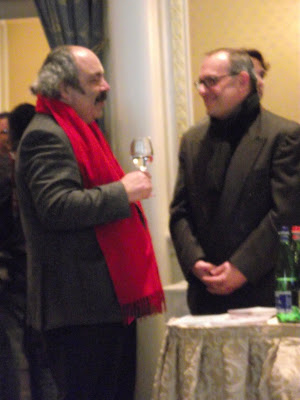 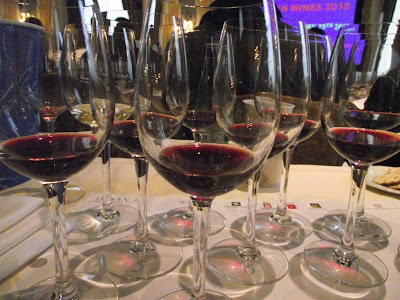 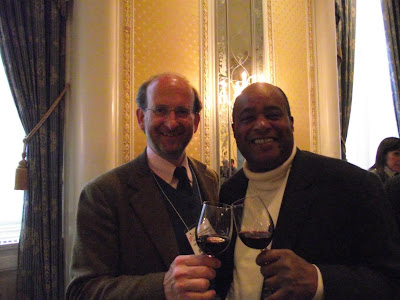 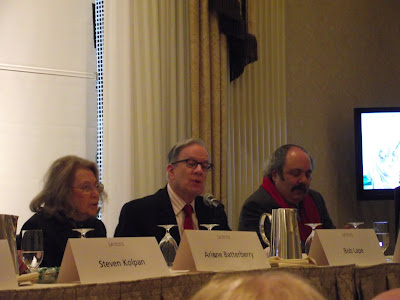 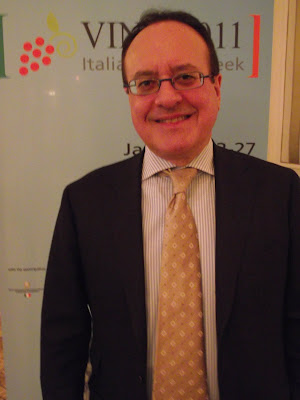 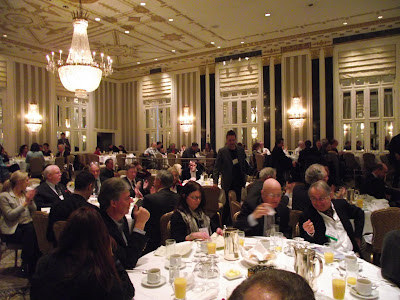 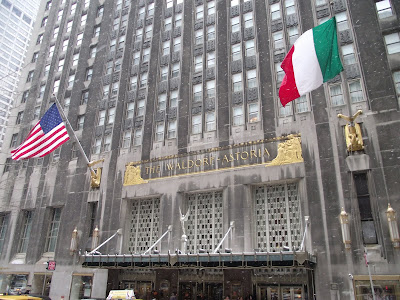 7. Fred Plotkin-Moderator, with panelists Bob Lape, restaurant critic and Ariane Batterberry, Food Arts Magazine at the Seminar "Has the Popularity of la Cucina Italia Surpassed French Cuisine as the Source of Inspiration and Motivation for Future Chefs?" held in the Starlight Roof South, Waldorf-Astoria

9. The Buyers & Press Luncheon at the famed Empire Room, Waldorf-Astoria

New York—The Waldorf-Astoria Hotel in Manhattan was the august scene for the 3rd Annual Italian Wine Week, VINO 2011. Under tight security, the nation’s most sophisticated buyers had an opportunity to mix and mingle with Italy’s Premiere Wine Makers.

Vintners present at the nearly weeklong confab comprised the virtual royalty of Italian winemakers. Regional wine tastings, luncheons and dinners featured wine tastings from the leading regions of Italy, including Apulia, Friuli, Venezia Giulia, Lombardy, Tuscany and Veneto. A focal point was the most comprehensive walk-around tasting of Italian varietals ever experienced in the U.S. The offerings ran the gamut; from award winning wines to old favorites, as well as new and undiscovered brands that came to the event in search of distributors. For a wine lover, journalist and connoisseur such as myself, it was the equivalent of arriving at the Gates of Heaven.

Bracketed by historic winter storms, which extended my stay in New York by several days, the frustration was ameliorated by the knowledge that I had experienced one of the seminal wine events of all time and had an opportunity to rub shoulders with the top names in the industry, both Italian and American.

Seminar topics were pointed and of utmost interest. Topics ranged from “The Future of Italian Wines”, moderated by Elin McCoy if Bloomberg News and featuring remarks by Umberto Vattani, Chairman, Italian Trade Commission-ICE, to “Want to Build a Profitable Italian Wine List? It Pays to Listen to the Pros, featuring panel participants such as Alpana Singh, host of Chicago TVs “Check Please!” and celebrated Wine Director at Chicago’s Everest Room and “Renaissance of the Cocktail in America: Top Spirits Professionals Assess the Role and Opportunities for Italian Spirits,” moderated by Francesco Vallarino Gancia of Southern Wine & Spirits and featured among the panelists esteemed wine writer and author Anthony Dias Blue of Tasting Panel Magazine.

Giovanni Montovani, Chairman, VeronaFiere-Vinitaly, the world’s largest wine exposition that takes place next spring in Verona, Italy, described VINO 2011 as “the most important representation of Italian wine in the United States. The U.S. is our most important export market. Through the years, the consumer here has entrusted us with their confidence by declaring us, through their significant buying power, as the favored wine of all exports. We are showing here that we are not only worthy of that trust, but are making great strides to further improve our product and make available the best wine that Italy has to offer at a fair price. We want to reflect the best quality for the greatest value!”

Women winemakers also made their mark at VINO 2011. Barbara Tamburini, a leading Tuscan enologist and consulting winemaker from Pisa, Italy, was among the panelists at “The 2010 Selezione dei Vini di Toscana Awards” which featured a review and guided tasting of the winners of the recently held 9th edition of the awards, followed by a walk-around tasting of the 30 Tuscan wineries whose wines were selected for excellence by the Region of Tuscany, Italian Trade Commission-ICE.

Among the winners was Lamberto Frescobaldi of Marchesi de’ Frescobaldi, one of Italy’s oldest wineries. With a history dating back to the 1300s, the family has included medieval knights, bankers, lawyers and patrons of the arts. The family tree in Florence almost mirrors that of the Medici’s. Marchesi de’ Frescobaldi is one of the most significant wine producers in Italy, with nine estates and roughly 2,500 acres in Tuscany.

While pouring a glass of his exceptional Frescobaldi

“I feel very welcome in this country. I feel comfortable here, not only because of the large Italian-American population, but also because of my personal experience here. I had the honor and the pleasure of studying at U.C. Davis (the University of California’s famed school of Enology at Davis, California, which produced some of the most famous names in California winemaking, including a number of ground-breaking female winemakers such as Zelma Long, formerly of Simi Winery, Sonoma County and the 2010 winner of the esteemed Andre Tchelistcheff “Winemaker of the Year” award at the San Francisco International Wine Competition, Amanda Cramer of Niner Wine Estates in Paso Robles, California).

“The American market has always been very generous to Italian winemakers,” Lamberto continued, while showcasing his newly released Toscana: “Mormoreto” 2006($49.99), a reserve blend of Cabernet Sauvignon, Cabernet Franc and Sangiovese, a spectacular Chianti Rufina that literally explodes with deep, dark fruit flavors, plumy fruit, dried currants and hints of Indian spices. “I feel an obligation to continue to produce wines that are not only pleasant to our American consumers, but better and better every year that we come here.”

From the record-breaking turnout of VINO 2011, in the face of both a daunting world economy and precarious winter weather conditions, it was obvious that Italian winemakers are in for another winning year. For more information on Italian wines, visit www.italianmade.com/vino2011.

Posted by Dwight the Connoisseur at 11:26 AM