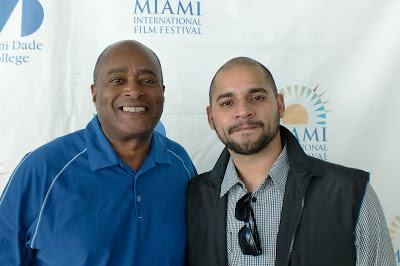 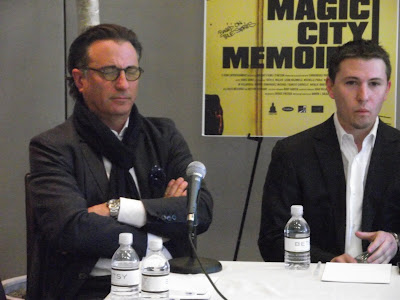 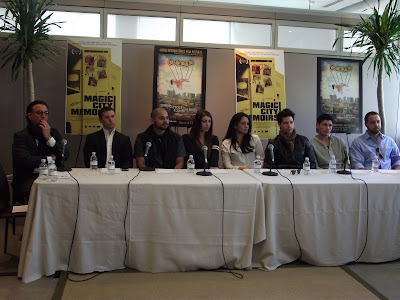 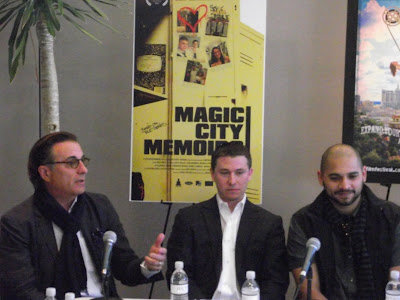 2, 3. & 4. Andy Garcia, with the cast of Magic City Memoirs at a news conference in South Beach at The Betsy Hotel

Aaron Salgado, who was born and raised in Miami, wrote and directed this very personal drama about the intertwining lives of three lifelong friends who battle each other, their families, and the heady, reckless abandon of their life of privilege in America’s most hedonistic of cities.

Cinematographer Gustavo Penna uses his camera like a surgeon's micro-camera, taking us behind the scenes to Miami's secret places, rarely seen by outsiders. The locales become a secondary character that tells the story with the equivalent force of dialogue and plot structure.

Suarez Jr. has a strained relationship with his father, due to divorce, which accounts in part for his rebellious behavior. Although he has excellent grades and a promising future following in his father’s venerable footsteps, his reckless behavior threatens to derail his future. He is constantly engaging in antics involving petty crimes, drinking and drugs with good friends Mickey Acosta (J. R. Villarreal-best known for being in the film Akeelah and the Bee-2006), who is a promising baseball prodigee, on the brink of being scouted by the majors, and Stok (Andres Dominguez, a relative unknown, previously in the short Jamaica Motel, who gives a bravura performance, reminiscent of a young Marlon Brando). Stok is the most conflicted of the characters and therefore, the most interesting. His father is a convicted drug lord, who tries to raise his errant son by phone from his prison cell. We later learn that Stok’s father was framed by Suarez Sr. in a scheme to cover up the mayor’s own shady activities. The resentment Stok harbors toward the Suarez’s, both Sr. and Jr. provides some underlying tension between the two friends that propels the plot to its tragic denouement.

The three friends, on the surface, have it all. They all attend private high school, drive fast cars and boats , drink, party, and have their pick of all the pretty girls. There’s even an allusion that one of them may have even caught the eye of a pretty, young substitute teacher. Although that may be more the product of youthful fantasy than reality. In any event , their risky behavior threatens to derail their future plans, just weeks from graduation.

The bottom line is, their lives are at the knifepoint. They can either sink in the quicksand of instant gratification, or grow up, take responsibility for their lives and move on.

In a sage moment, Angel Jr. counsels Acosta to “get the f---k out of this town, before it swallows you up!”

Magic City Memories is director Salgado’s personal diary put on film. The title is derived from the crudely drawn memoir of Stok, whose terse poems and rap lyrics are contained in a worn black and white high school composition notebook. His words provide the central pulse for the movie.

In Magic City, the life of privilege and easy access is both a blessing and a curse. It is the source of the character’s greatest pleasure and their most profound pain.

Director Salgado also shows something rarely seen in U.S. films. He shows the Hispanic American community in a very realistic life. It is a depiction that only one who has lived his entire life in it can achieve.

He shows his community in its entirety, warts and all. Anyone who thinks there's a monolithic Latino community in America needs to see this movie There are just as many race and class divisions among Hispanics as there are in the rest of society. Class difference and social standing, figure prominently in the construct of the plot of Magic City.

At one point in the film, Mikey dresses down Angel Jr. for his treatment Mari (Natalie Martinez-Detroit 1-8-7 TV series), a girl from the 'wrong side of the tracks' by Coral Gables standards.

“As beautiful as she is. As right for you as she is for you," Mikey pleads,"you won't make her your own, because you think you're better than she is."

In a pivotal scene, Stok is found remorseful and suicidal, seated in the crumbling ruins Miami's abandoned Bayside Stadium. It is a particularly telling and poignant moment.

Salgado elaborated on the significance of the scene and its locale in a post-screening interview. "The Bayside Stadium is significant to us and important to the film. Its the place here we hung out as kids and did our grafitti. Its where we later launched our boats and went out and partied on the Bay. its a big part of our lives. Its really not that surprising that that's where we find Stok, because that's his sanctuarry. We actually had a hard time getting approval permits from the city to film there. The city of Miami is very particular about how their landmarks are portrayed. But we pursued it because we felt it was important to the central theme and look of the film. "

As a director, Salgado succeeded in creating a film that rings with authenticity. "We wanted to create something that was organic and authentic and that really showed things from a local perspective and from the point of view of someone who actually lived and grew up in Miami. We see so many things like Miami Vice that show the city in a very unrealistic and superficial light. We felt it was important to be true to our experience of living and growing up in Miami."

The credits include a tribute to friends of the director, who have passed on. “These are the names of people I know who were lost to suicide, or car accidents, war, or some other tragedy. I wanted to honor them and be true to their memory in some way in this film.”

Magic City Memoirs has the ring of truth throughout its two-hour running time. The dialogue literally sings. The film gives you the feeling that you are eavesdropping on some very personal and private conversations. Somehow you feel that youjust dropped into a parking lot outside a nightclub in Coconut Grove and overheard a group of guys drinking, partying and then suddenly erupting in a fighting over a girl. Or that you somehow snuck into the back door of one of those ornate Mediterranean style homes you drive by in Coral Gables and eavesdropped on a private encounter between two young lovers.

No release date has been announced for Magic City Memoirs and no deal has been proffered for cable release. Keep and eye out for that information. The film is well worth viewing.

Posted by Dwight the Connoisseur at 10:20 AM