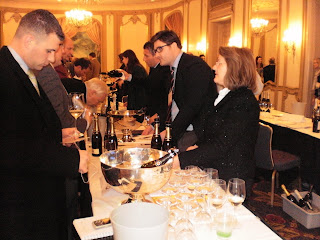 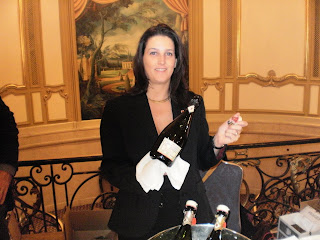 “The Italian Wine Masters” swept into Chicago’s Hilton and Towers with more than 150 producers from the most prestigious D.O.C.G. (Denominazione di Origine Controllata e Garantita) wine producing regions in Italy presenting a thousand of their best wines.

The first room was dedicated to Prosecco, the Italian sparkling wine made from the Prosecco grape, which is the pride of northern Italy. “This is the first time that there has ever been an entire room dedicated to Prosecco, “said Lamberto Frescobaldi scion of the renowned Marchesi de Frescobaldi house of Florence. “We are presenting our Prosecco IGT Brut II Fresco and our DOC Extra Dry Claxa Prosecco as well as our Extra Dry GR 11% Danzante for the first time in the United States.” The sparkling wines were all different, ranging from a classically bone-dry sparkler, which would rival anything from Champagne, to the Danzante, which had a slightly sweet taste. It was a perfect dessert accompaniment or something that could stand on its own as an aperitif. Bravo Frescobaldi!

Luisa Bortolotto, Planning and Marketing Director of Carpene Malvolti, is the spitting image of the Mona Lisa, the subject of the most famous painting in the world by Leonardo da Vinci, which hangs in the Louvre in Paris.

The history of Carpene Malvolto dates back to the 1860s, when Italian patriot Antonio Carpene founded the winery. A staunch supporter of Garibaldi’s Red Shirts, Carpene was a chemist who had a strong belief in the power of science to change society.

An associate of the great Luis Pasteur, he admired Champagne and was convinced that he could produce sparkling wine of the same distinctive character from the Prosecco grape of the Conegliano and Valdobbiadene zone, D.O.C.

“He was truly a pioneer in the use of the Prosecco grape in creating this type of wine. He became a famous enologist who taught others in the region how to grow this grape and use it to make great sparkling wine. In 1924, he put the first label with the word ‘Prosecco’ on the bottle. Before that, he called this wine Champagne Italiano. Then he was obligated to change the name, because the Champagne area reserved the name. So, he changed, and decided to name this wine ‘Prosecco.” The rest, as they say, is winemaking history!

The sparkling wine is made using the Charmat method, which is, as Bortolotto described, is “a shorter way of making sparkling wine. This is a fresh wine. Very easy to drink. It’s also not too alcoholic, being only 11%. It’s nice to drink before dinner or during lunch. It’s very easy to drink and goes with a variety of foods.”

By the way, as of this year, wineries outside of Italy can no longer use the word ‘Prosecco.’ “ The name of the grape has been officially named to ‘Clara,’ Bortolotto proclaimed. We won’t have any more Prosecco coming from the rest of the world because the official name has changed and noone outside the D.O.C. can use it. So you won’t see Prosecco coming from any place else in the world, beginning this year.”

The illustrious history of Prosecco doesn’t stop there. There’s a strong connection to the great American writer Ernest Hemingway, who lived and worked in Rome as a war correspondent for the International Herald. A frequent habitué of Harry’s, the famed bar on the Via Veneto in Rome. It’s where the famous Bellini drink was created, a concoction of equal parts Prosecco and the juice of a freshly squeezed white peach.

Steve Lombardo of Blue Star International Imports, the Chicago-based importer that brings Carpene Malvolti into the country, tells the story. “ The Bellini was created in Harry’s Bar by Sr. Cipriani while he and Sr. Carpene were drinking in the bar late one night. It was after 3 in the morning and they were trying to come up with a new drink so Sr. Carpene simply grabbed one of the peaches that was in fruit basket on the bar, squeezed it into a glass with his bare hands and topped it off with some of the Carpene Malvolti Prosecco and, Voila!, the Bellini was born!” The story has become legend. Hemingway mentions it in one of his articles in the Herald, so, there must be some truth to the legend.”

Posted by Dwight the Connoisseur at 9:25 PM