A "Premiere" event in the Napa Valley 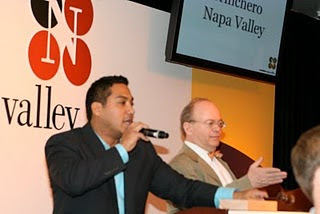 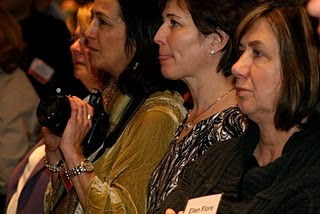 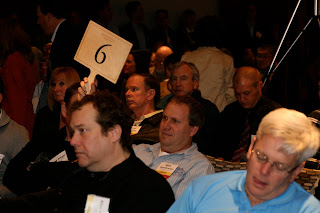 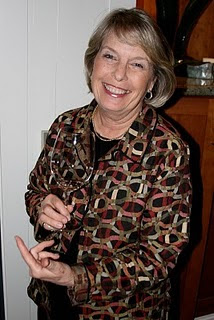 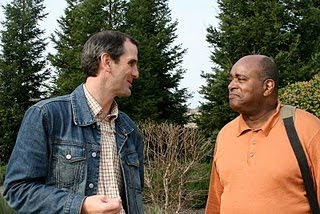 “Here. Hold these!” Mark Pope, a former pharmaceutical company executive who is now founder and chief executive of the Bounty Hunter, a Napa, California wine shop that specializes in rare and cult wines, shoved a pair of bottles of Beringer Vineyards 2007 Cabernet Sauvignon Mountain to Valley into my lap. Each was worth about a thousand dollars. He had just won them at auction at Premiere Napa Valley 2010, the Napa Valley Vintner’s Invitational Barrel Auction for the Wine Trade, held at the massive cathedral-like Greystone, The Culinary Institute of America, formerly occupied by Christian Brothers Winery. He was on his way to bid on another prime lot of Napa Valley Wine, Shafer Vineyards 2008 Cabernet Stag’s Leap District that eventually went to another bidder for a staggering $42,000.

All of the money raised at Premiere Napa goes to benefit the ongoing educational and marketing programs of the Napa Valley Vintner’s Association and its various charities and outreach programs.

That was just the tip of the iceberg in a single afternoon that would bring hundreds of thousands of dollars in bids from wine retailers, restaurant owners, hotel and resort operators and high-roller wine collectors who came from around the planet to bid on what some connoisseurs believe are the best wines in the world.

“Napa Valley has a unique position in the world,” said Jac Cole, winemaker at Spring Mountain Winery, best known for being used as the façade for the mythical Falcon Crest in the hit CBS-TV soap opera series of the 1980’s.

“I just came back from Bordeaux, where the wines are of a completely distinctive flavor profile. French wines are distinguished by the soil. It can’t be duplicated anywhere in the world. That mineral and limestone flavor that is imparted to the wines can’t be duplicated anywhere in the world. There’s one thing that Napa Valley has that no one else in the world has, a unique blend of intense fruit, a mixture of soils in a very defined area and a combination of cool breezes from the ocean and short, hot bursts in the valley. It makes for a bright, intense fruit profile that we really need to do a better job of promoting. You realize that there are so few places on the planet that have that unique combination of factors that produce great wine, and we’re one of them in Napa Valley. That’s what makes Napa special and why people are coming here to this auction.”

A visit to nearby Duckhorn vineyards, which specializes in Cabernet and Merlot blends, proved why their 2008 Cabernet Sauvignon Three Palms Vineyard brought a commanding $32,000 at auction, sparking some of the most competitive bidding of the afternoon. Mark Pope of Bounty Hunter won the lot.

“We pride ourselves on being specialists in making great Cabernet and great Merlot. We have a number of collectors who have followed us over the years and are very loyal to our brand and we’re very grateful to people like Mark Pope who have remained loyal to us over the years and supported us,” said winemaker Bill Nancarrow, a New Zealand transplant who has spearheaded Duckhorn’s expansion into new labels like Paraduxx that is designed to attract a newer generation of wine drinker.

Duckhorn Wine Company is a collection of small winery estates focused on site- specific wines of distinction. Co-founded by Dan and Margaret Duckhorn in 1976, Duckhorn Vineyards has spent a quarter century establishing itself as one of North America's premier producers of Bordeaux varietal wines.

At an open house, held in conjunction with Premiere Napa, Margaret Duckhorn was the life of the party. Drinking a glass of its 1992 Merlot, she reminisced about the early days when the winery was establishing its name. “When we started, we made just 800 case each of Cab and Merlot. We didn’t even have a tasting room. Now, we have this sort of hunting lodge motif that makes it feel warm and homey. We’re amazed at how many people have been loyal to us over the years. Also lately, we’re seeing a lot of younger people coming here to the tasting room who say they remember their parents drinking Duckhorn. Now, its like they’re continuing a family tradition.”

The party was flowing with pourings of the barrel offerings for Premiere and savory bites of marinated shrimp and prime been short rib “sliders” with garlic crinkly ‘fries’.

Next day’s barrel tasting and auction was jammed with collectors and trades people chomping at the bit to bid on Napa Valley’s luscious wines. At one point, the bidding was so hot and heavy it brought the auctioneer down to audience level from behind his lofty podium. It wasn’t long before bidding levels exceeded $50,000, even hitting a stratospheric $72,000 by mid-afternoon. It was getting down and dirty!

Posted by Dwight the Connoisseur at 5:24 AM